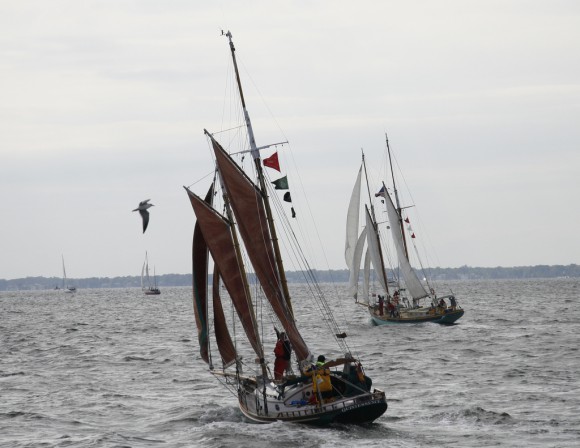 Winds are fluky. No wind. Some wind. Takes you one direction, then another. Never know where you’ll end up. Sometimes it can be a very pleasant surprise.

A few weeks ago an email landed in my inbox from a Traditional Small Craft group I belong to. Someone needed a few more hands to help crew a schooner down from New Jersey and back. Sounded interesting, and it appears I have some free time on my hands at the moment. Hmmm.

To make a long story short, it turns out the owner and skipper, Paul Gray, happens to know very well some friends I’ve sailed with – Mike Wick, Doug Oeller, Kevin Brennan, etc. –  a few of whom will be on board for the trip. And now so will I. 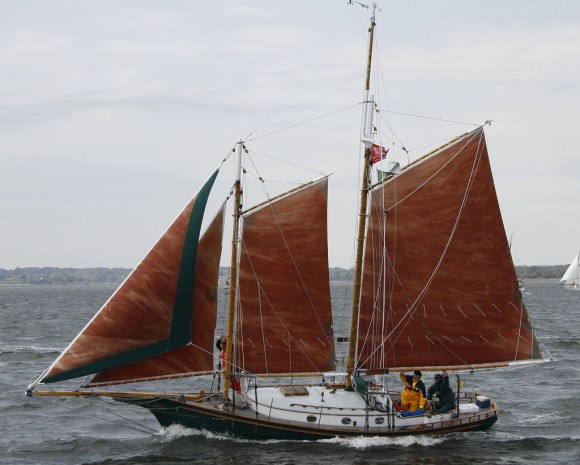 “Quintessence” under sail during the race in 2007

Next week, the schooner Quintessence will take part in the Great Chesapeake Bay Schooner Race, a contest she won last year. She is currently enroute to Baltimore, where I’ll meet up with her for pre-race events in the Inner Harbor. The race begins Thursday, and will finish sometime Friday (Saturday for some) in Portsmouth, Virginia.

Originally, I signed on to help Paul with the long return trip. There’s a brief layover after the race, and the plan was to board in Portsmouth to help take her back to home port in Barnegat Bay, NJ. (Yes, that Barnegat Bay – birthplace of the Melonseed.) They sail the boat round the clock for several days, four crew members alternating watches in pairs, four hours on and four off. The route goes from Portsmouth all the way up the Bay, through the Chesapeake & Delaware Canal, down the Delaware River, around Cape May, and up the Atlantic Coast to the inlets of the Jersey Shore and home to Toms River. That alone sounded like a very interesting trip.

But Paul says he stays so busy during these events he doesn’t even get to sleep much, let alone take photos or video. He already knew of me through this website, oddly enough, and had seen the photo galleries and video of all the Mid-Atlantic Small Craft Festivals I’ve posted over the years. After thinking about it a bit, he decided it would be nice to have a photographer on board during the race itself. So a plan was hatched, and I’ll meet them in Baltimore, my primary duty to grab what I can of the race and the trip in photos and video. (I have, however, offered to cook some. Apparently no one else does, and I don’t intend to starve on this trip.)

I hope to do some live blogging and posting of photos from the boat when there’s signal. If the technology doesn’t fail me, they’ll appear here and on Facebook simultaneously. Afterwards, of course, I’ll do a more thorough write up than I can do with my thumbs, but it will be fun to send digital postcards in real time.

Paul has set up a SPOT satellite tracking page for Quntessence, so you can follow her progress during the whole week. As I write this, they’ve left Philadelphia and the festival at the Seaport Museum, and are making their way toward the C&D Canal. You can view the page here, by clicking on the image below: 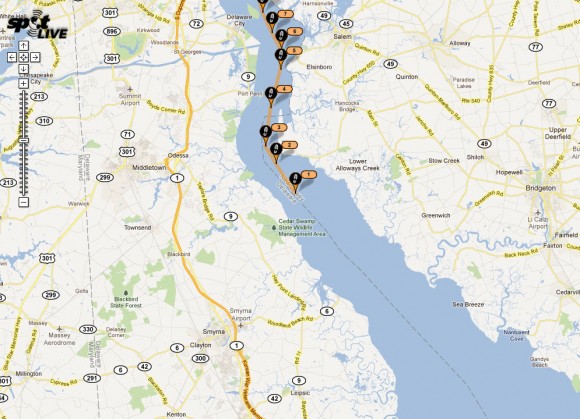 or simply open the link directly:

The basic schedule is here:

If you’re interested in background of the race, related onshore events, and the 38 other schooners participating (some of which are over 125 feet long), Spinsheet has produced a program guide in PDF format you can download here:

Packing up gear today, should be in Baltimore Harbor by mid day Wednesday.

Now I just have to figure out how to get there.