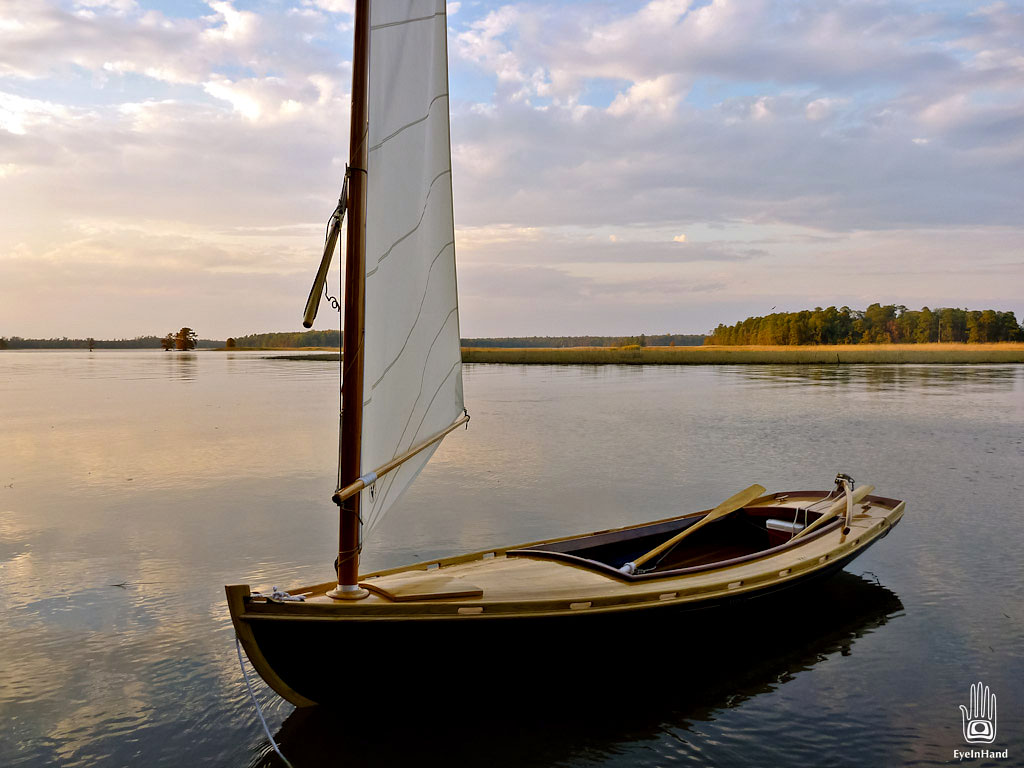 Aeon at rest after a good run.

My desk faces two big windows. In the afternoon, the sun slants across the porch and peeks in. There’s a wisteria vine curtain that waves coyly if there’s any wind, and through the gaps are red and yellow maples that join in, shimmering. Further off still are woods, then mountains, a ripple of blue-greyed horizon, like distant surf. Makes it hard to get work done sometimes.

Tuesday was a beautiful day, a breezy day. I ignored it successfully and regretfully until it was too late to do anything with. Yesterday was much the same, though, and two in a row is just unfair. The Schooner Race posts will just have to wait a bit longer. Terri has her weekends in the middle of the week, so we loaded up Aeon and headed for big water, back to the Chickahominy. (Caesura gets no love until she muscles her way onto the trailer.)

On the way there, I noticed how whole flocks of leaves were taking flight from trees in a now surprisingly strong wind, and they swirled and rattled around the car as we tunneled through them. By mid-afternoon at the ramp it was sunny and 80 degrees, warm enough to sweat in shirtsleeves as we rigged up. But the wind was really exuberant. I dialed a buoy about a mile away, and it was apparently dancing a jig in a relentless 19 knots with gusts to 25. No tops’ls today. I’ve only sailed these boats half a dozen times, and never in anything over 10 knots. Some of that sweating was more nerves than heat, I can assure you. But hey, these boats have a reputation for handling hard weather, right? I suggested maybe Terri would like to sit on the windward side and we shoved off. 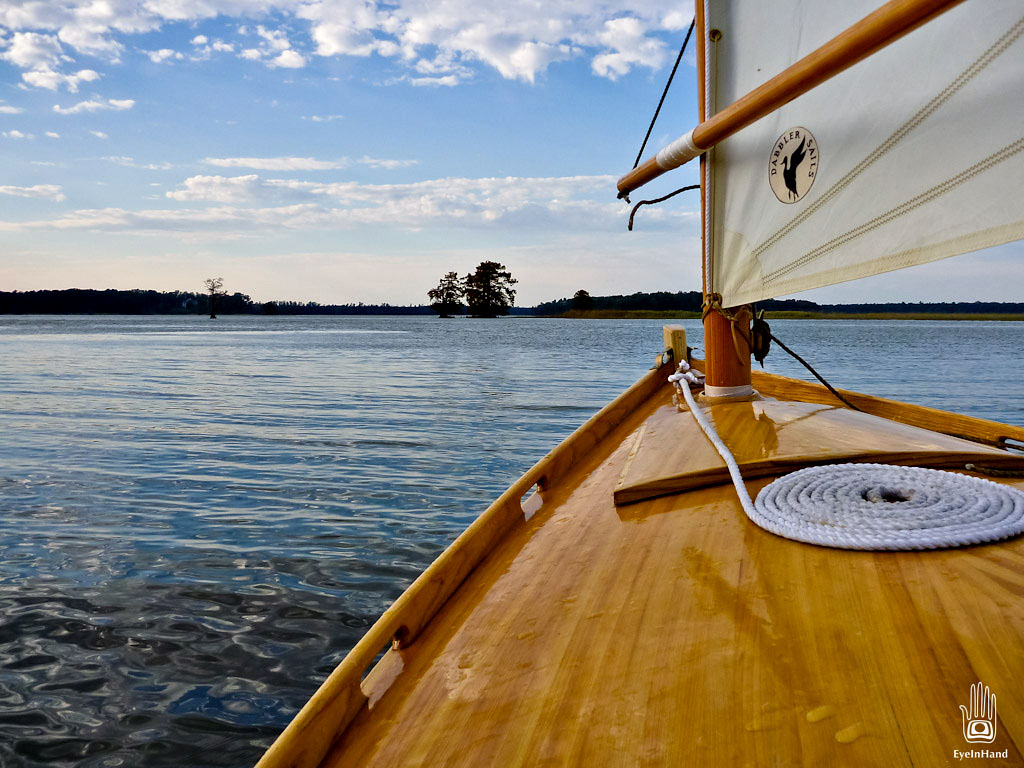 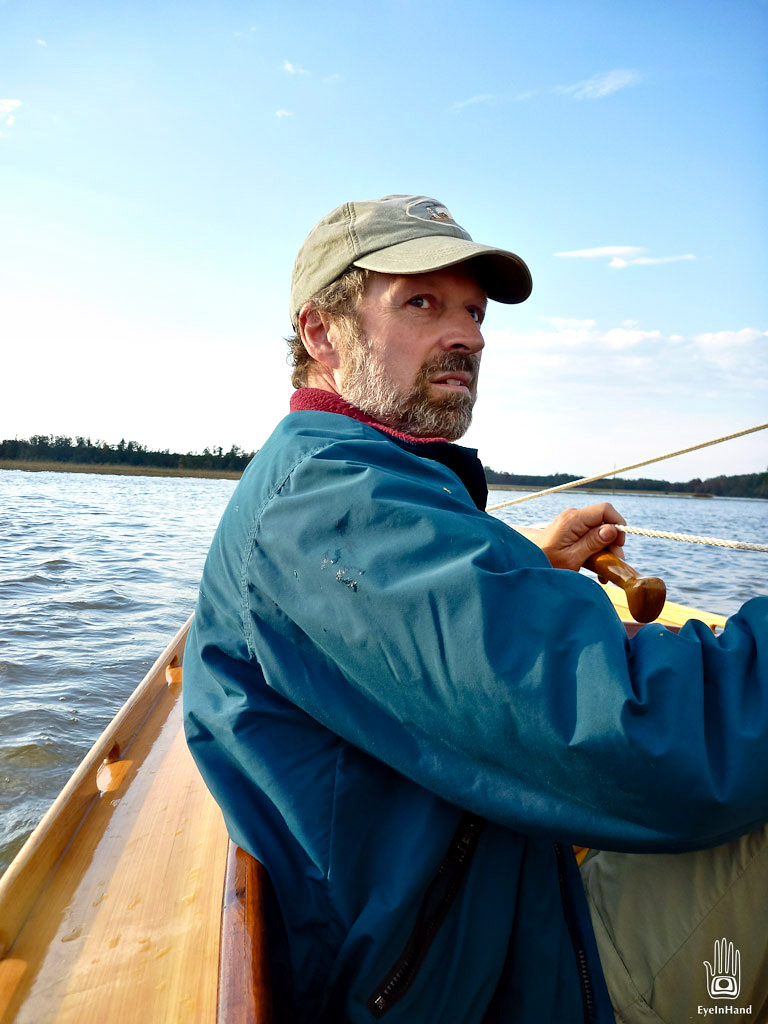 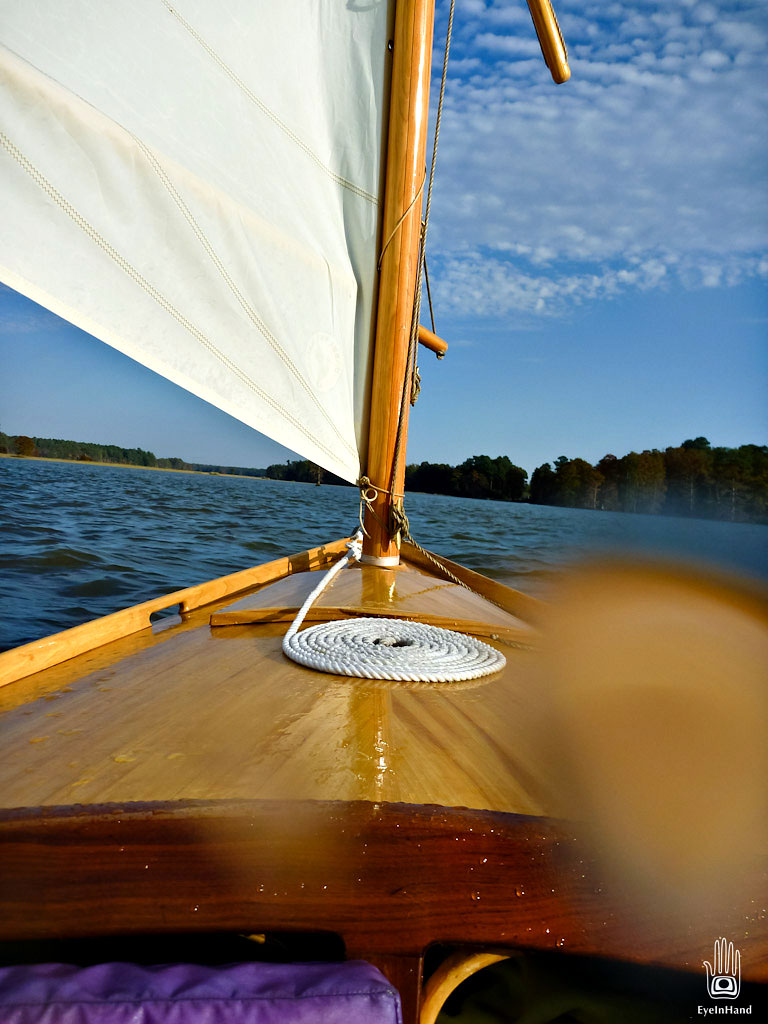 It was a fine day, though, and the boat handled it beautifully. We made long reaches back and forth across the wide part of the river where it was really howling, and ducked into protected creeks and marshes on either shore where it was very still and quiet. Almost shockingly so. So quiet that I found it hard to trust after getting such a good slapping only moments before. We did that for a couple of hours. Never once did the boat feel tippy or out of control. Amazing.

In my old boat, we could not have left the protection of that first creek. 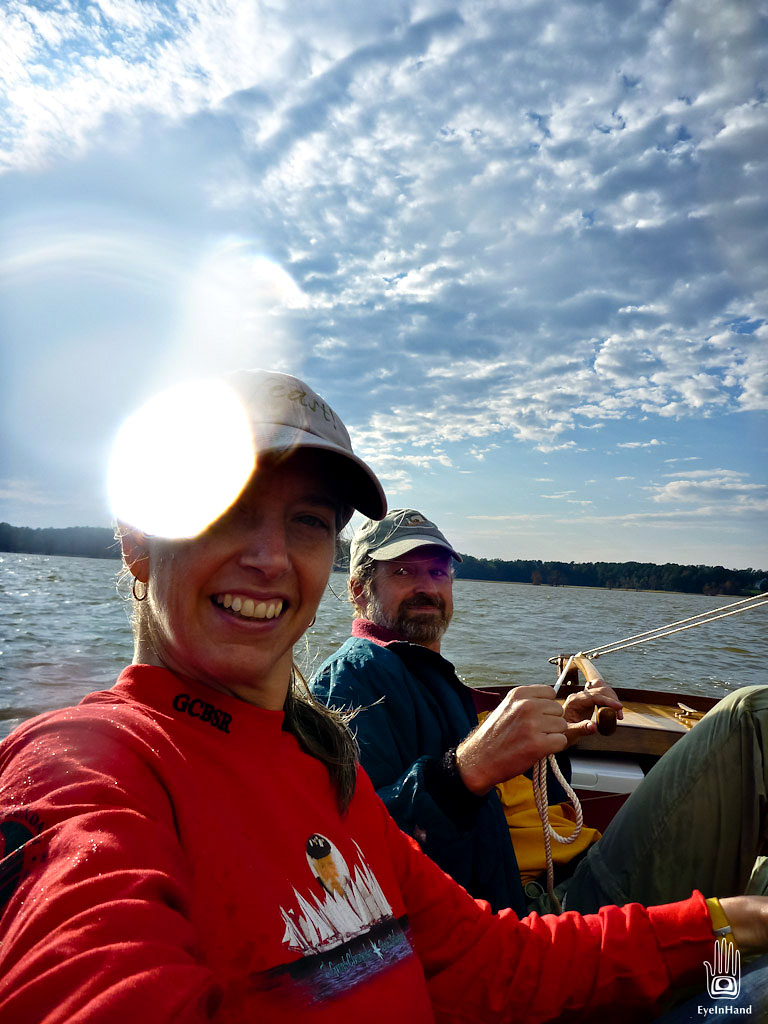 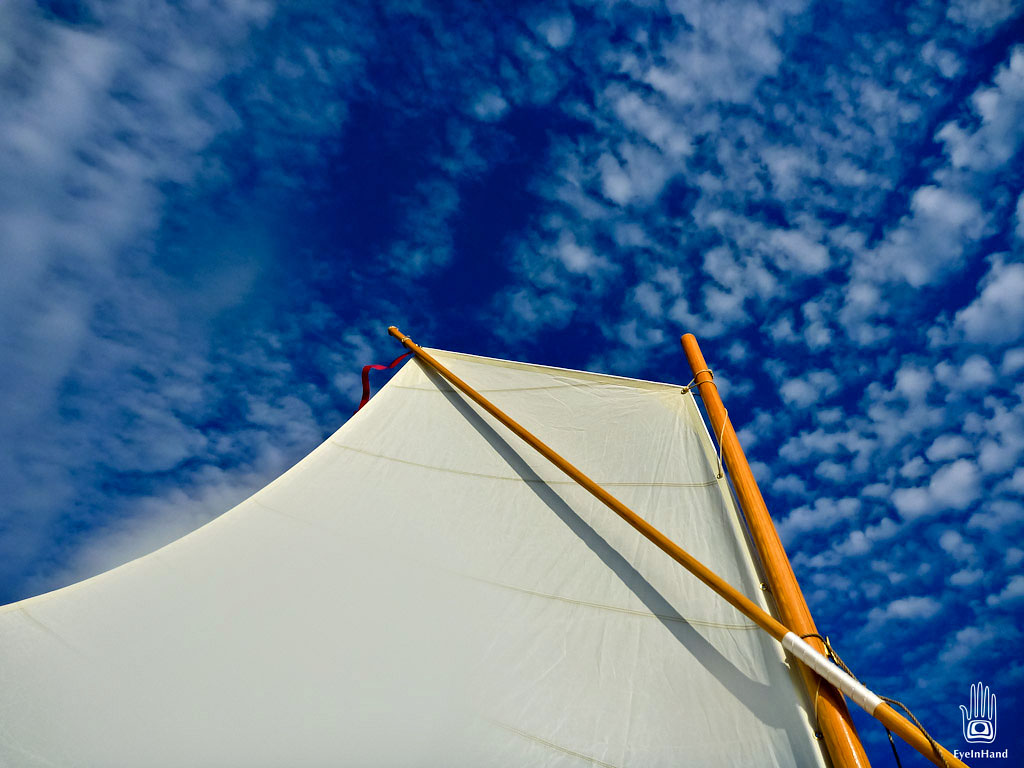 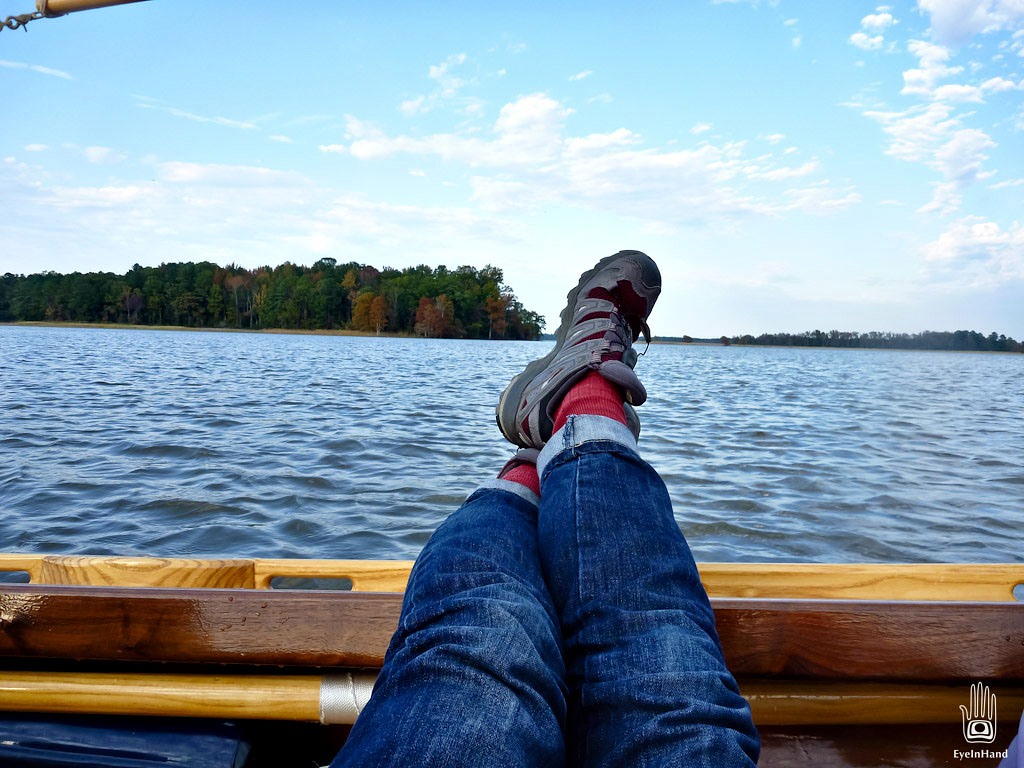 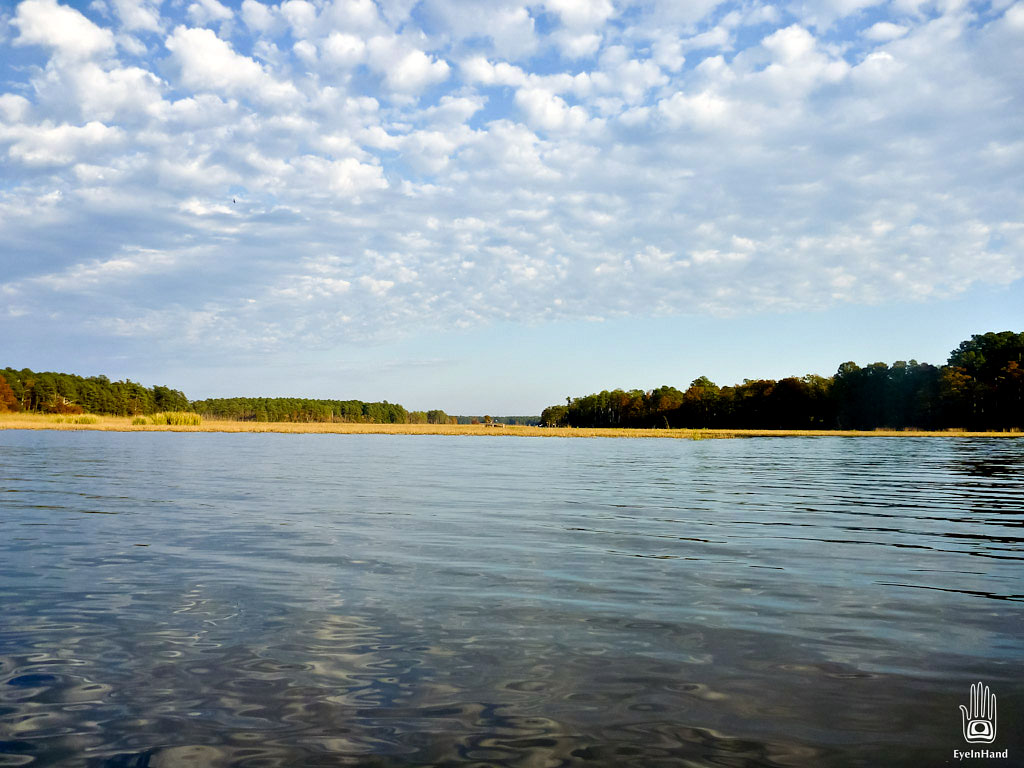 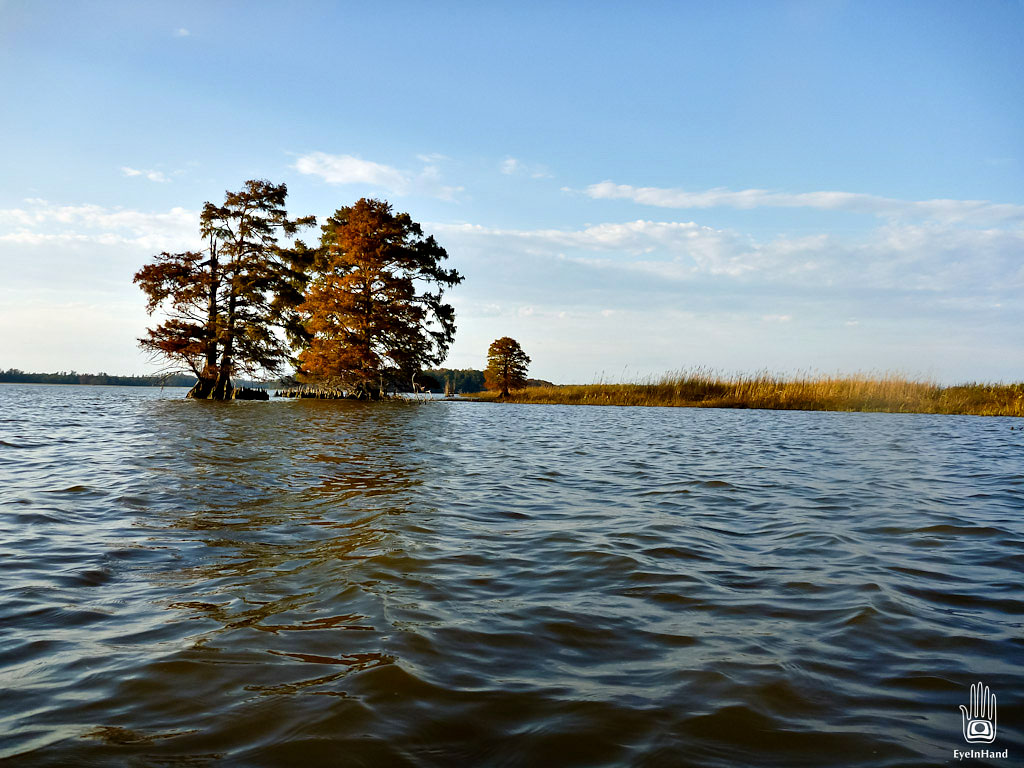 Several times during the broad crossings our speed exceeded 6 knots, which is very fast for a non-planing boat this size. Feels even faster when you’re so close to the water. Between the adrenaline and splashes of cold spray in the face you stay quite alert.

LIttle by little, the wind settled down to a more sedate 12 knots, and we could relax a bit, enough that I could ease my grip on the sheet and hold the camera briefly. The rest of the time Terri had to take all the photos. 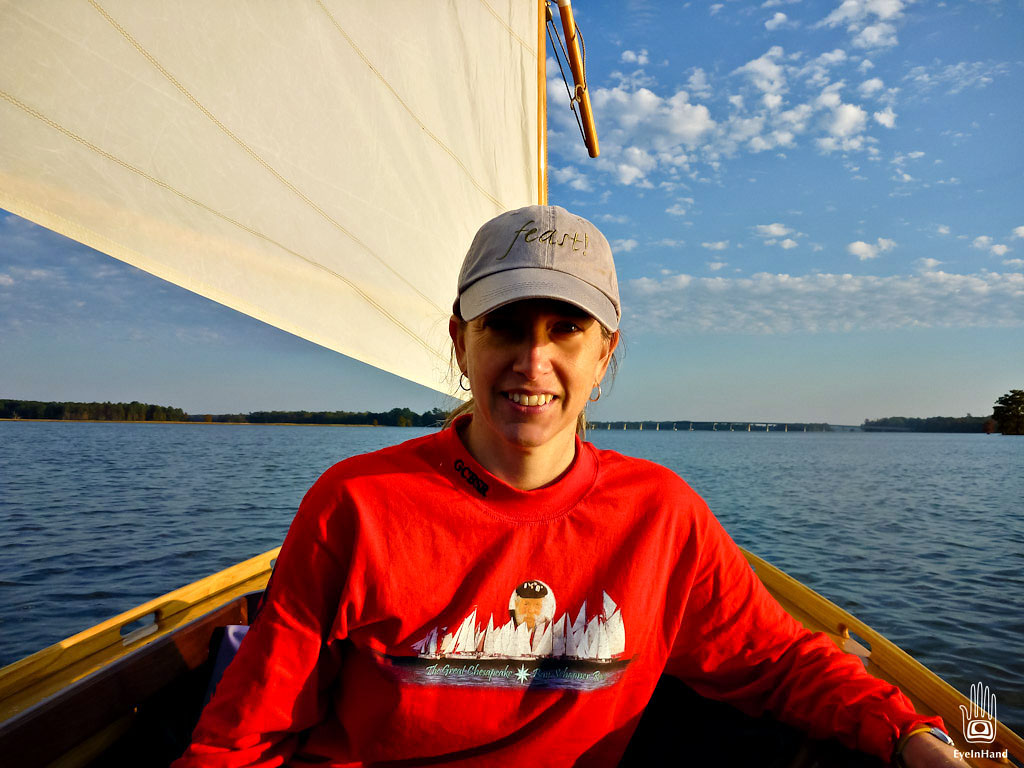 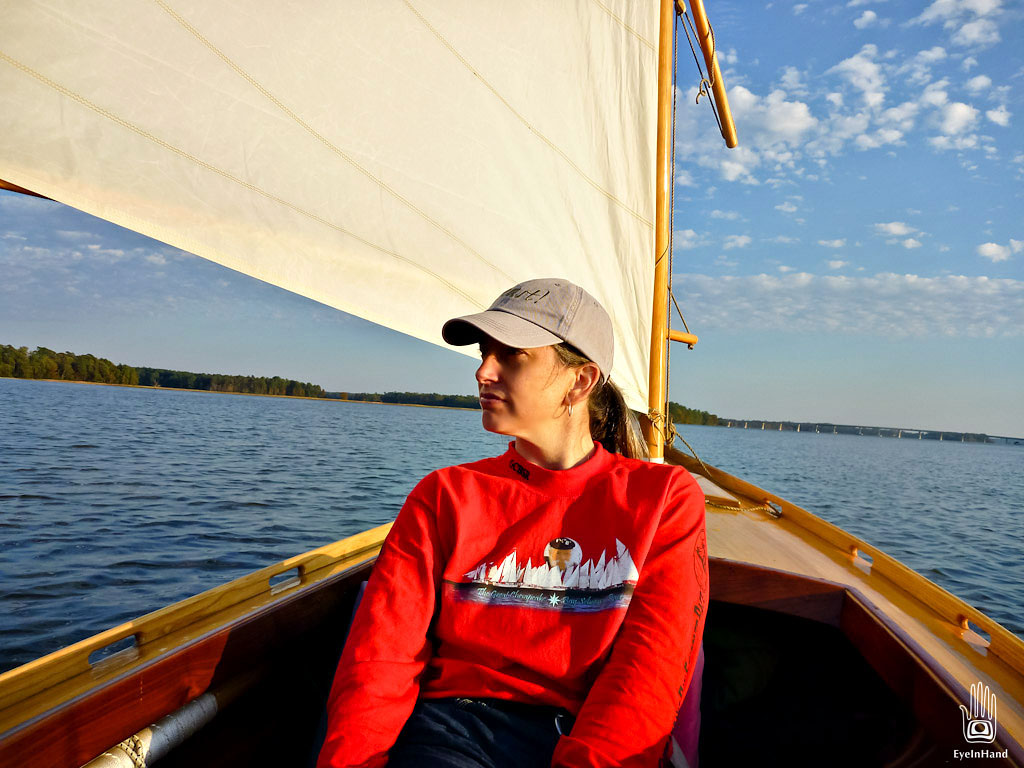 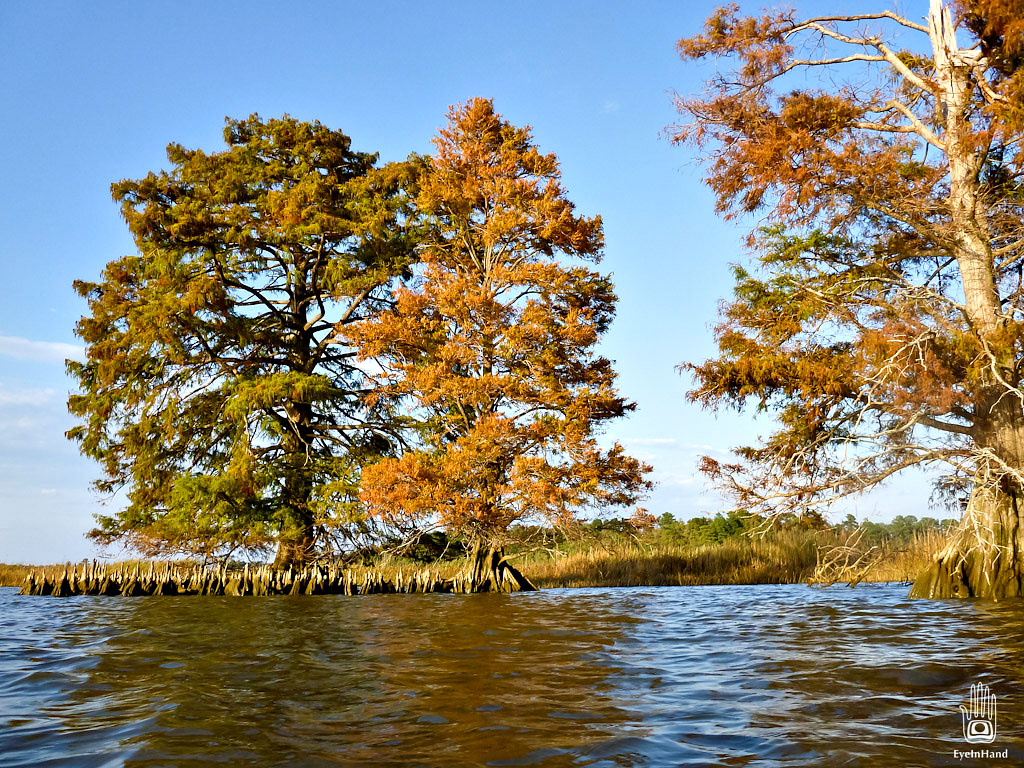 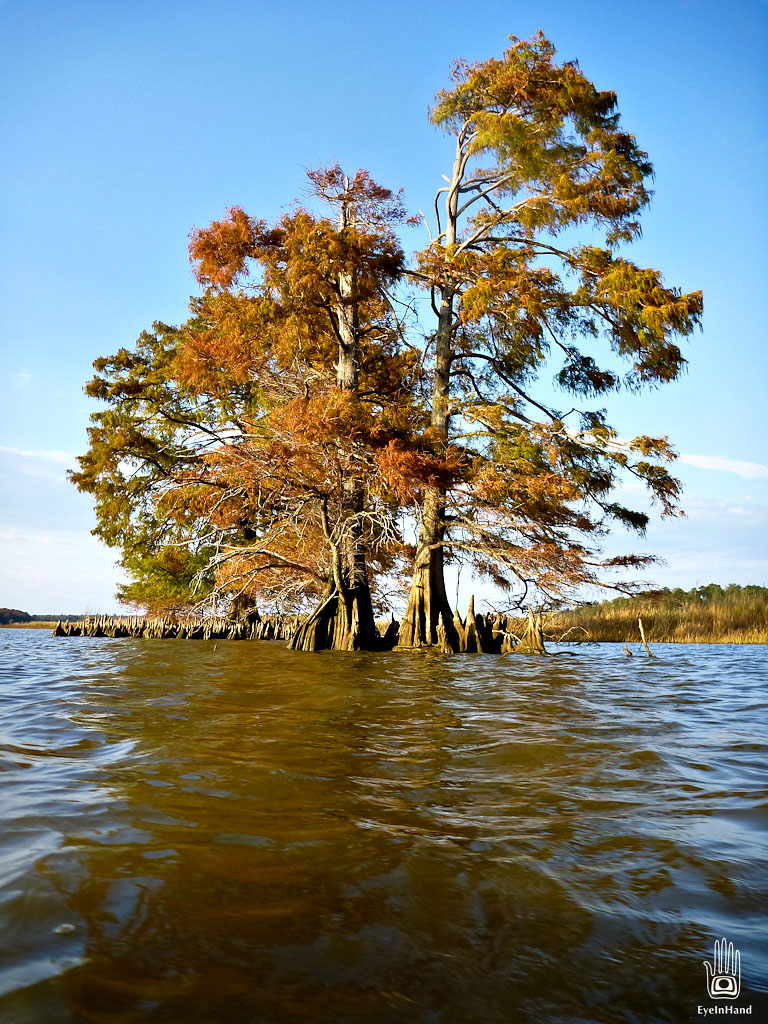 The wind dropped more at sunset, and in the lee of the bluff along the creek the water was still as glass. We had to row the last 50 yards against the tide to the dock. 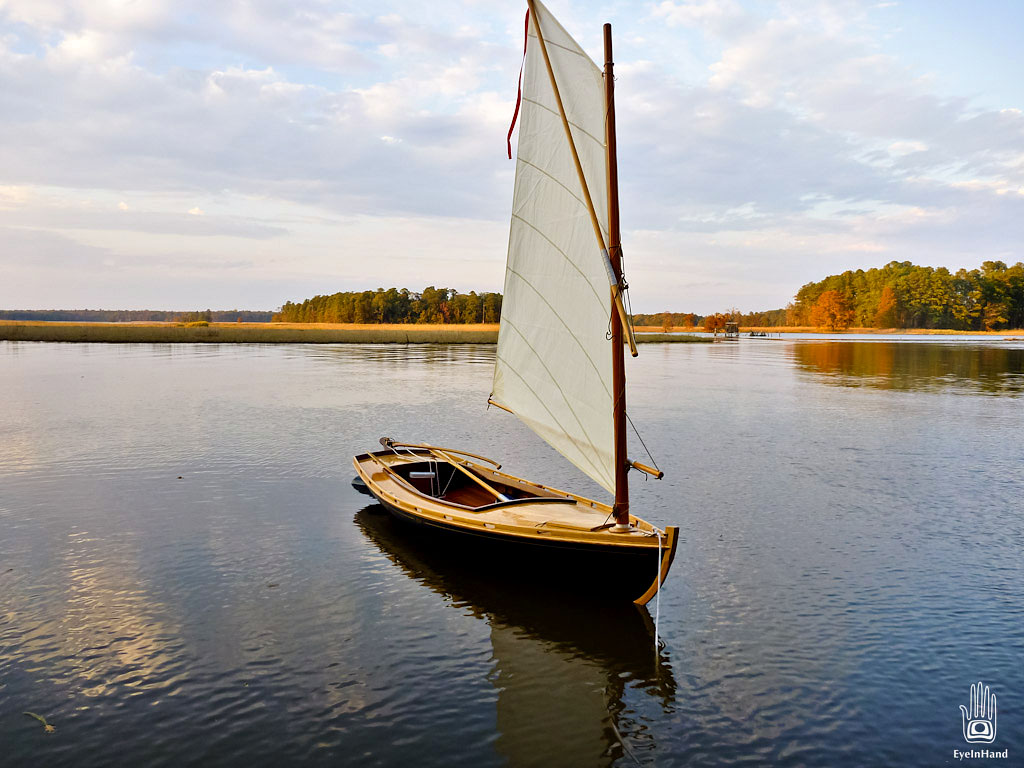 Here’s some video taken at different points during the trip. Notice how quickly the boat accelerates in the first puff. I certainly did. With the high autumn tide and wind piling water up in the river, the marshes were flooded when we started out. Places I knew were only inches deep looked like open water, so we stayed in the channels I could remember. The tide was falling, and I didn’t want to get stranded deep in the marsh surrounded by a quarter mile of mud. But we got close enough to watch a pair of Bald Eagles, some Great Blue Herons, and Cormorants. 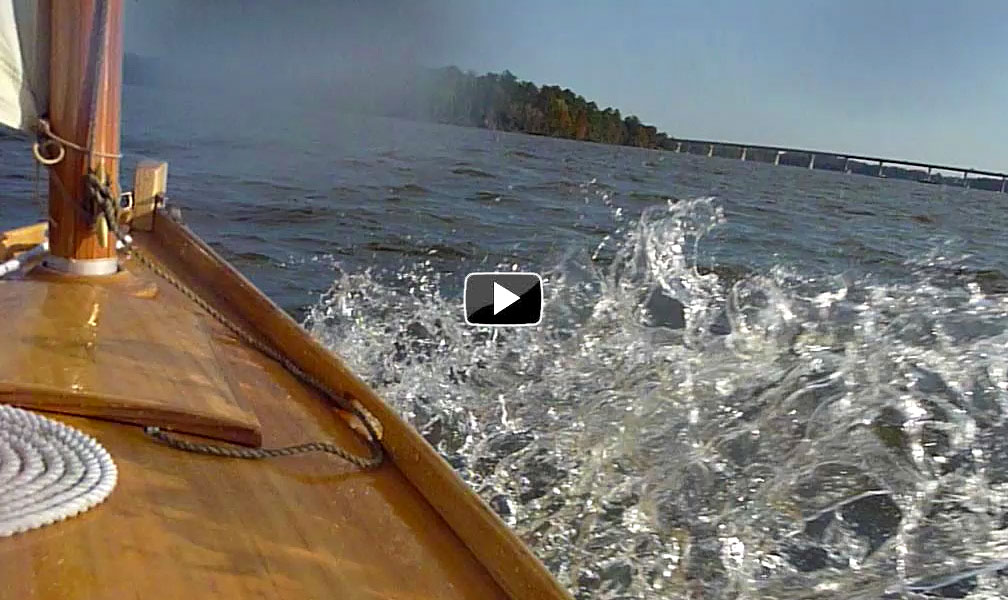 On the way home, we made a detour to a diner in Richmond, and caused a small stir with the boat parked on the street in the heart of the city. One guy stopped dead in his tracks and came over to see the boat. I heard him say something like “Holy Sh*t!” before we could even get out of the car. Nice guy. Keeps a small pocket cruiser on Solomons Island, and a picture of it always visible on his cell phone.

So that was yesterday, a day that felt like summer. We woke up this morning, only hours later, to a Winter Storm Watch, and by this evening, as I write this, it’s snowing in those mountains I can see from the window. Record snow falls are expected all up the coast through Saturday.

What happened to Fall? Like I told DoryMan, I don’t know if yesterday was the cruel joke, or today is.

2 Replies to “A Short Fall ~ Sailing with T”