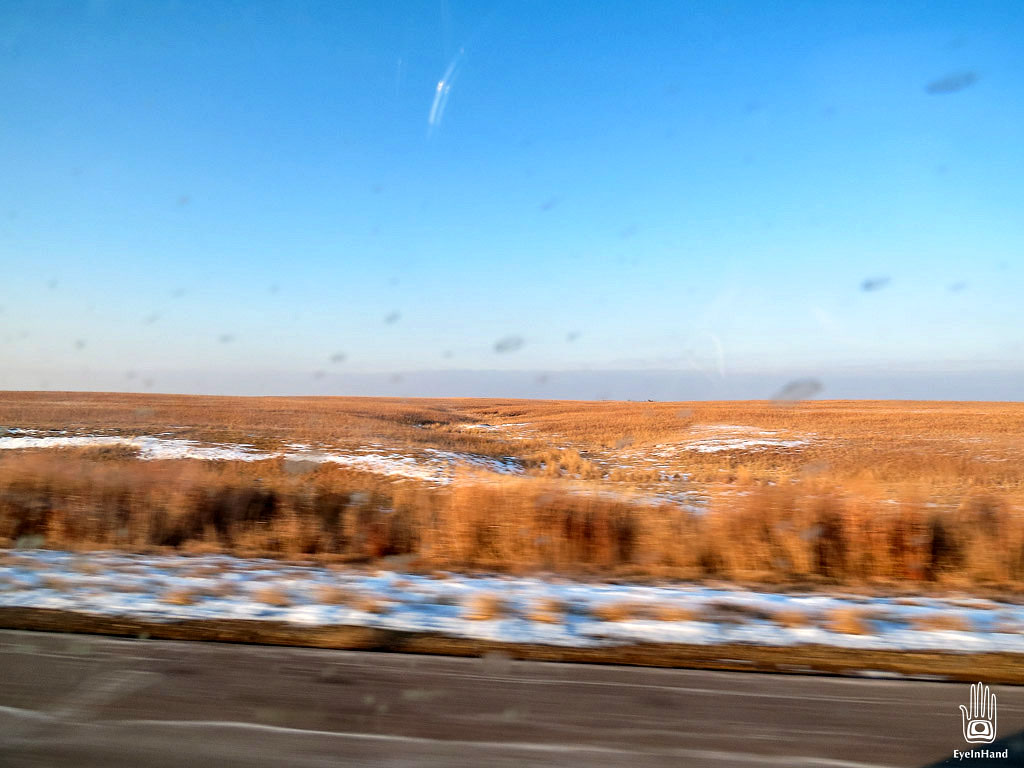 Leaving the city of Kansas, which is in Missouri, lands us in the state of Kansas, which is not in Missouri. The weather improves immediately, as though meteorology obeys cartography, which follows geology, or at least topology, which all actually makes sense. The sky becomes blue again, and thus begins one of the longest and strangest passages of the whole trip. 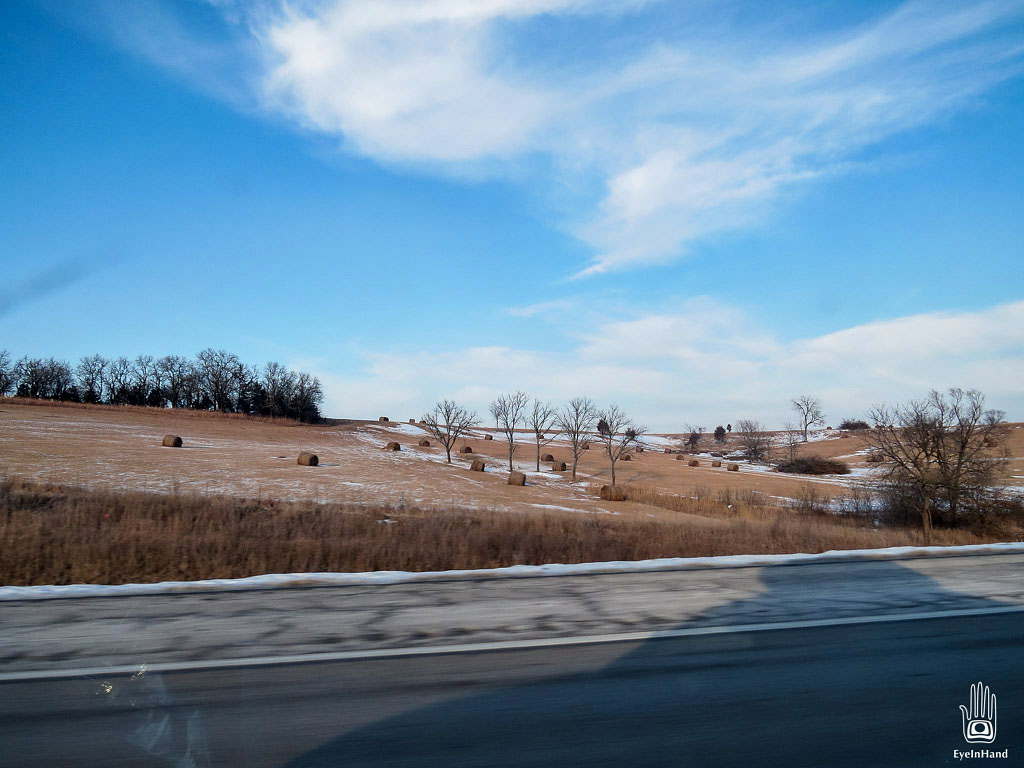 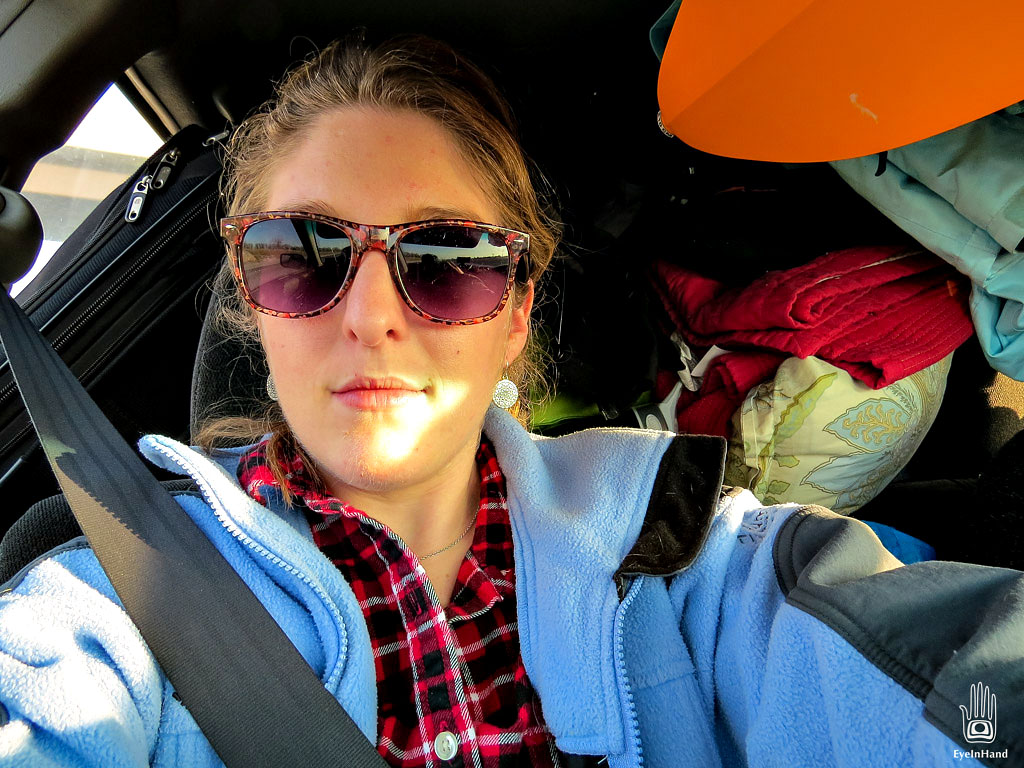 We will spend more time in Kansas than any other state, and do it traveling in nearly a straight line at over 80mph (the speed limit here is 75), while stopping only briefly, twice, for gas. Spanning 417 miles, we will drive farther within a single state only in Oregon, and only because we cross that state diagonally. In other words, it takes a long time to get out of Kansas. Six hours and eleven minutes, to be precise. 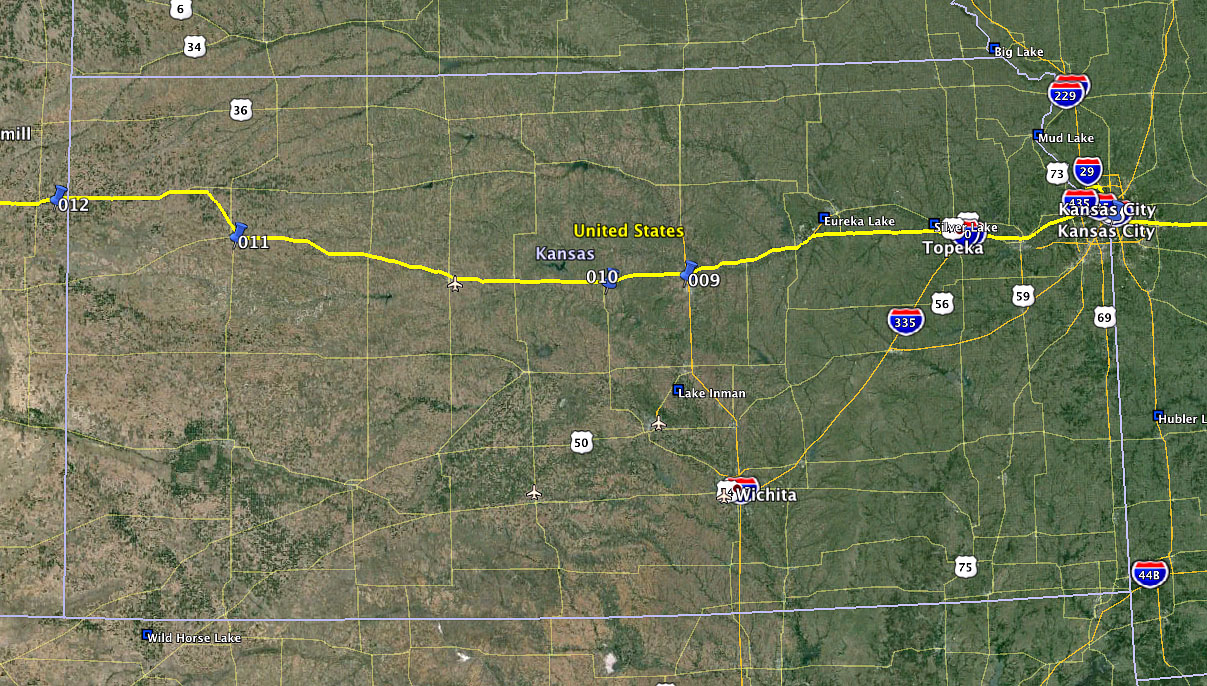 This will also be our longest single day of driving, at over 17 hours total, covering just short of 1000 miles. The goal is to get to, or at least near, Fort Collins, Colorado. We have arranged to meet a friend of Emily’s, the chief hydrologist for the National Park system, for breakfast there.

Kansas looks flat, incredibly flat, which it is, but in fact it’s also tilted, like a table with broken legs. The lowest point of the day is at the Mississippi River back in St. Louis. After crossing the whole state of Missouri, we have risen barely another 300 feet. But from the eastern border of Kansas to the western edge, we will climb steadily, imperceptibly, to 4000 feet. Essentially at eye level again with the mountaintops back in Virginia. But it’s so flat and treeless here you can’t tell. You can see so far in every direction it almost hurts your eyes. Very strange. 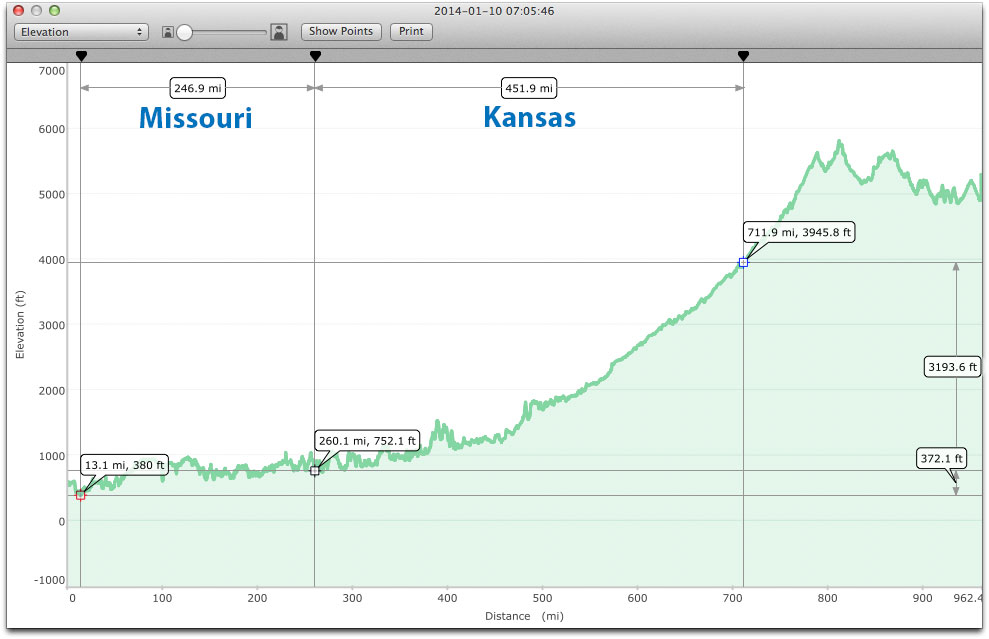 Elevation of I-70 across Missouri and Kansas

This is tornado country, clearly. There is nothing at all to stop the wind. It buffets the car relentlessly. As you look out over the grassy plains you realize you could see a tornado coming all day long, like a slow motion train wreck, and yet have nowhere to hide from it. That scene from the Wizard of Oz keeps replaying in our heads. “Auntie Em! Auntie Em!” 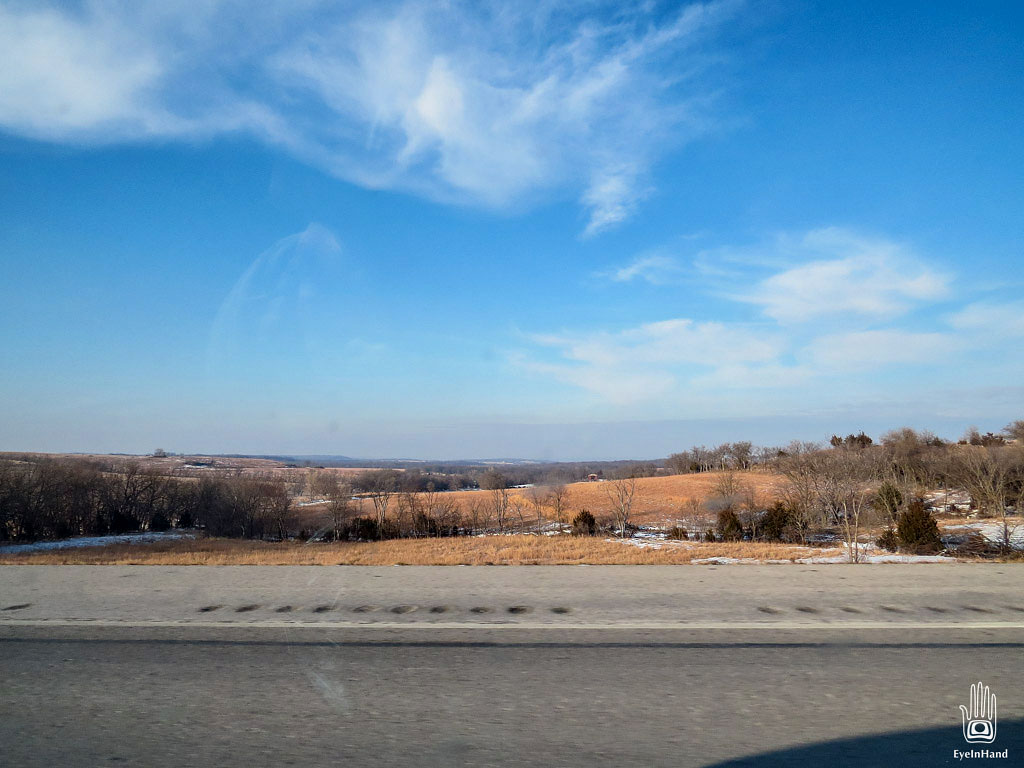 It’s unfair to judge a state by what you can see of it from the highway. Case in point: New Jersey. However, there are places, like Kansas, where pretty much everything you CAN see is from the highway. To get a different view you have to turn off onto one of the two lane roads that intersect perpendicular to it, like a graph paper grid on the living landscape, and then drive a long time. Then you should get out and walk, and do that a long time.

You would come back with a very different feeling – one of comforting isolation, the bleak, austere beauty of the place, and gain a respect for the hard lives people live here. The sheer omnipresent immensity of the sky is constantly humbling. Humans are depressingly small and insignificant at this scale, where the smallest unit of measure is a square mile, and the only native resident is the infernal wind. But even if you did all that, the view would still be the same, in every direction. 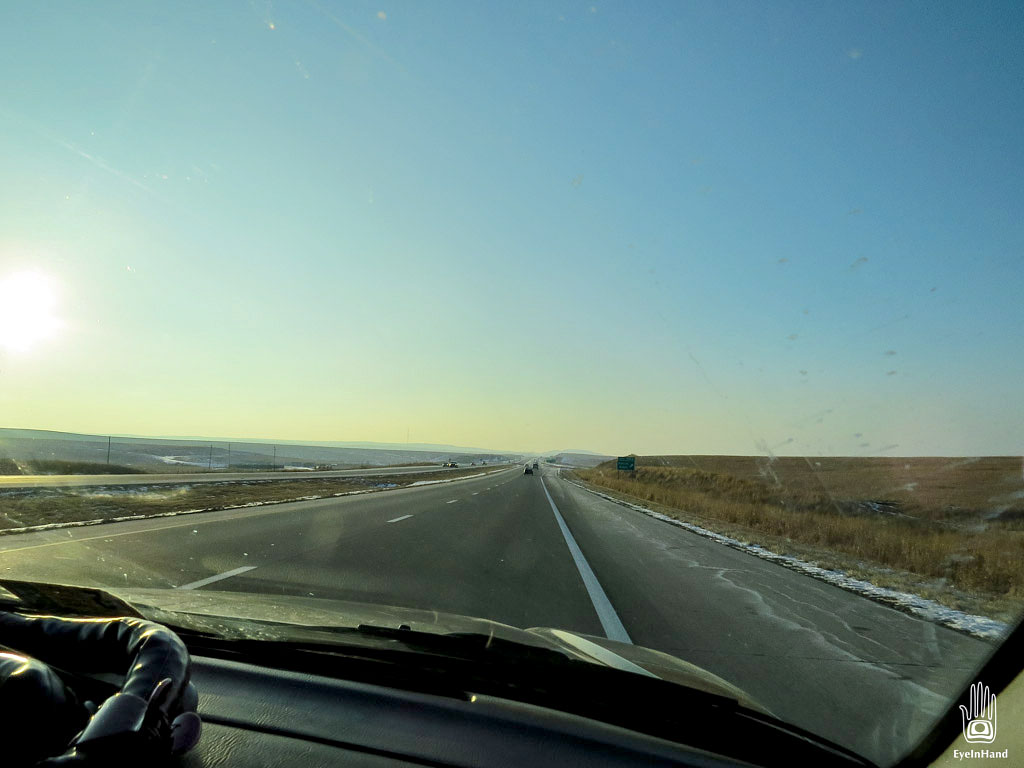 For the rest of the trip there’s a new rule: When the tank reaches half empty, stop at the next gas station. Fill up and switch drivers. Regardless. It is a  good rule. For some stretches to come, from half empty to the next gas station will require grinding through another hundred miles of empty highway. In southern Idaho, even following the rule, the fuel gauge will dip below ⅛ tank before the next top-off is possible. It would be a bad thing to run out of gas in the middle of the night, in the middle of winter, in the middle of nowhere. It’s a good rule.

At Salina we stop just before full dark. The pattern noticed back in Kentucky is indeed repeating, like Groundhog Day. Every truck stop includes an empty restaurant, a “Guess Your Weight and Get Your Fortune” scale, and a rotating rack of alarmingly unappetizing wieners – sausages rolling for days and days in a hot, carcinogenic bath of their own juices. These three totems of the highway appear over and over, but they are in stark relief in Kansas where there is so little else. We’ll stop again in 176 miles at an oblique bend in the road called Oakley. Ditto. Again in Limon, Colorado. And on and on. 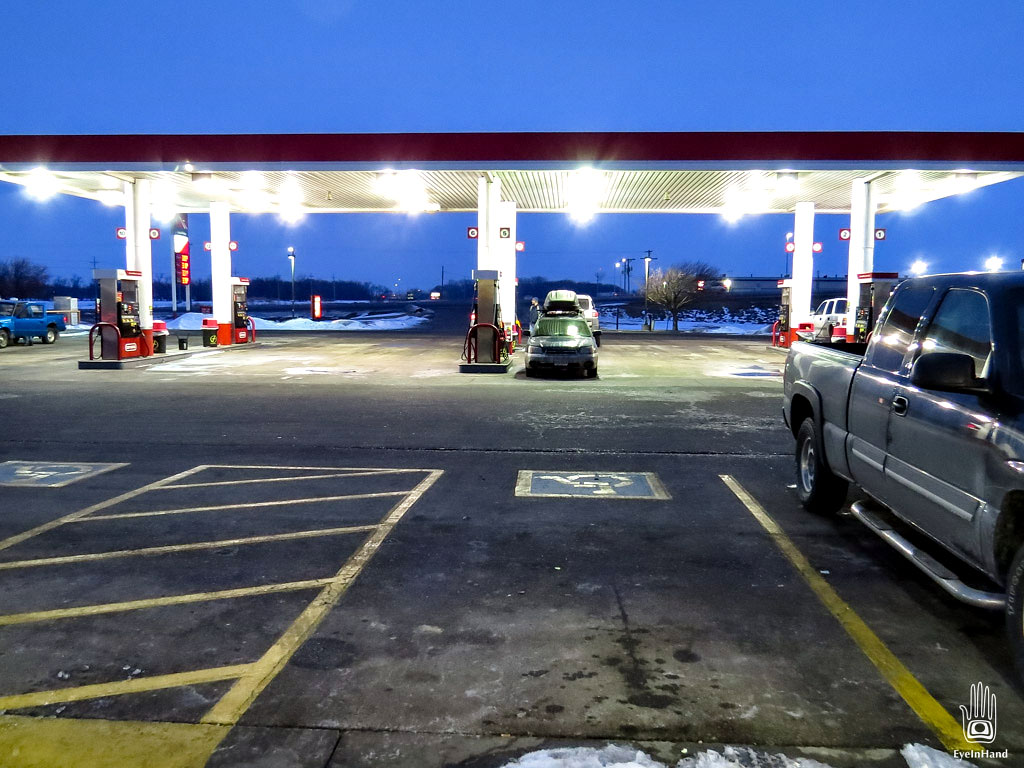 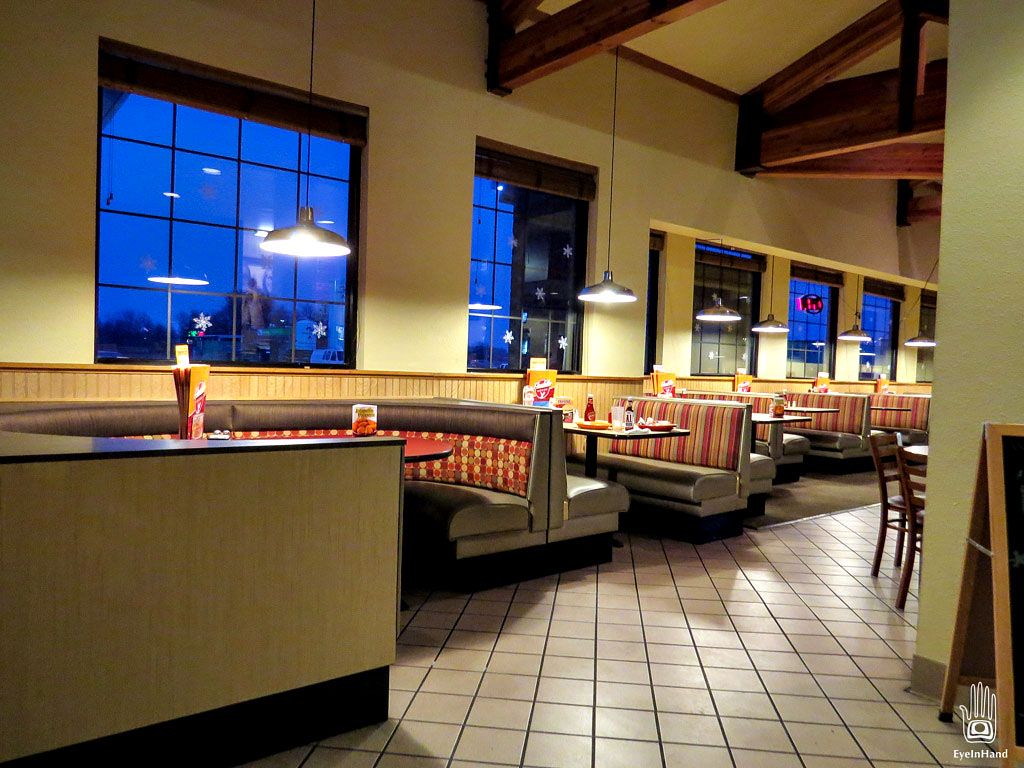 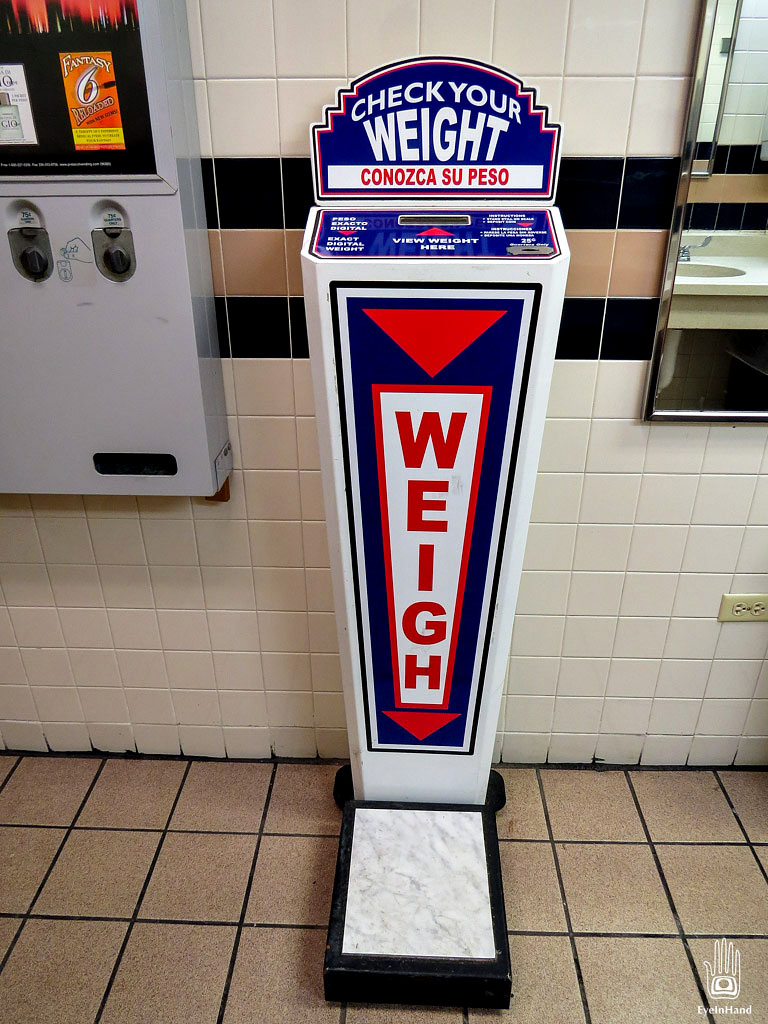 Thirty miles beyond Salina, the horizon is blinking with red lights in a black sky. We assume radio towers. A bit farther on the lights have multiplied. Wow, must be a big radio field. Maybe it’s the highest spot in the state and everyone wants to be here?

Then we see the lights are scattered north and south of the highway for many miles. There are hundreds of them, all beating together like the pulse of a single organism. We’re getting pretty freaked out when Emily notices, in the glow of a light up high near the road, a spinning blade. Windmills. A field of windmills. Each with a blinking red beacon on top to ward off crop dusters. 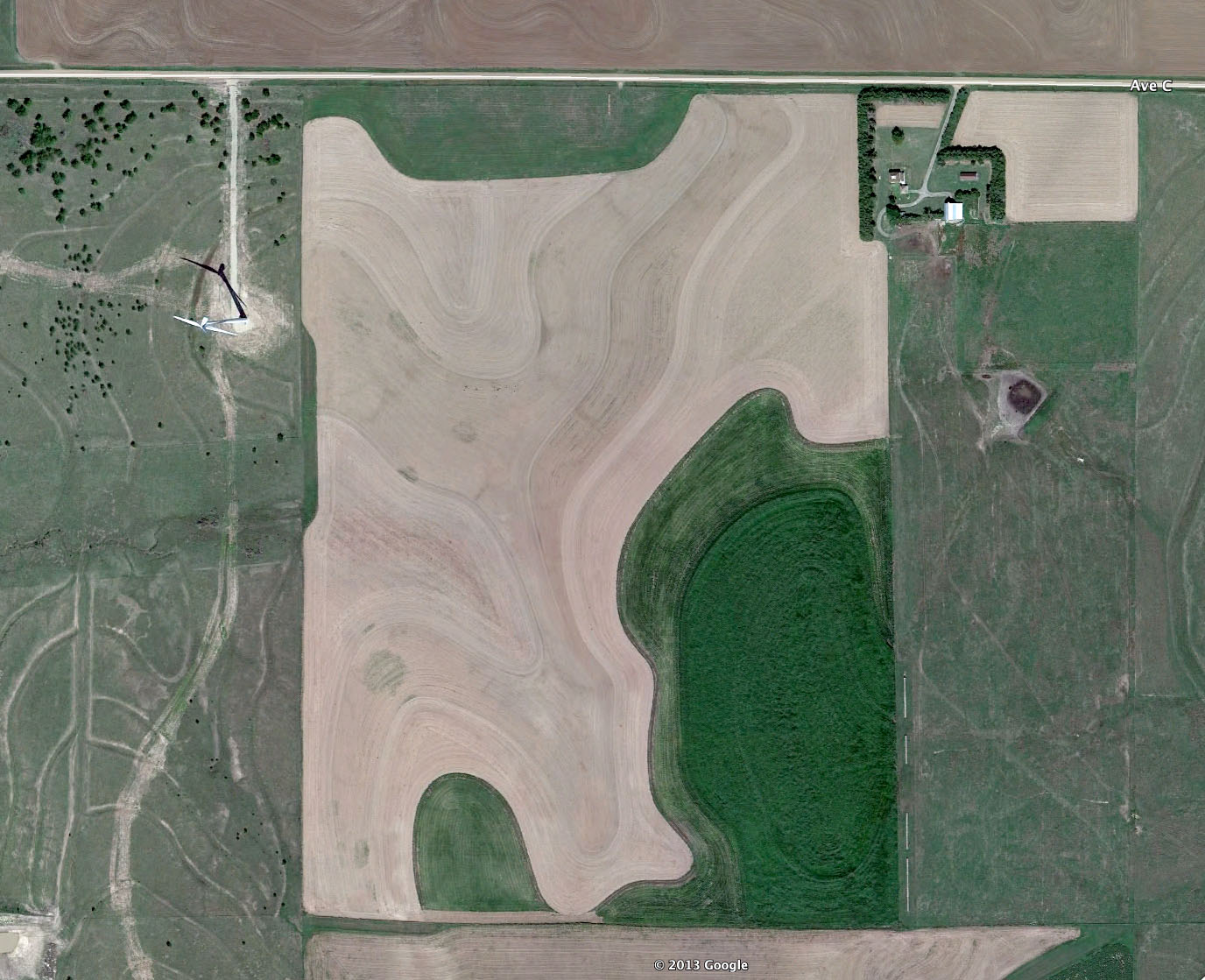 Windmill in a field 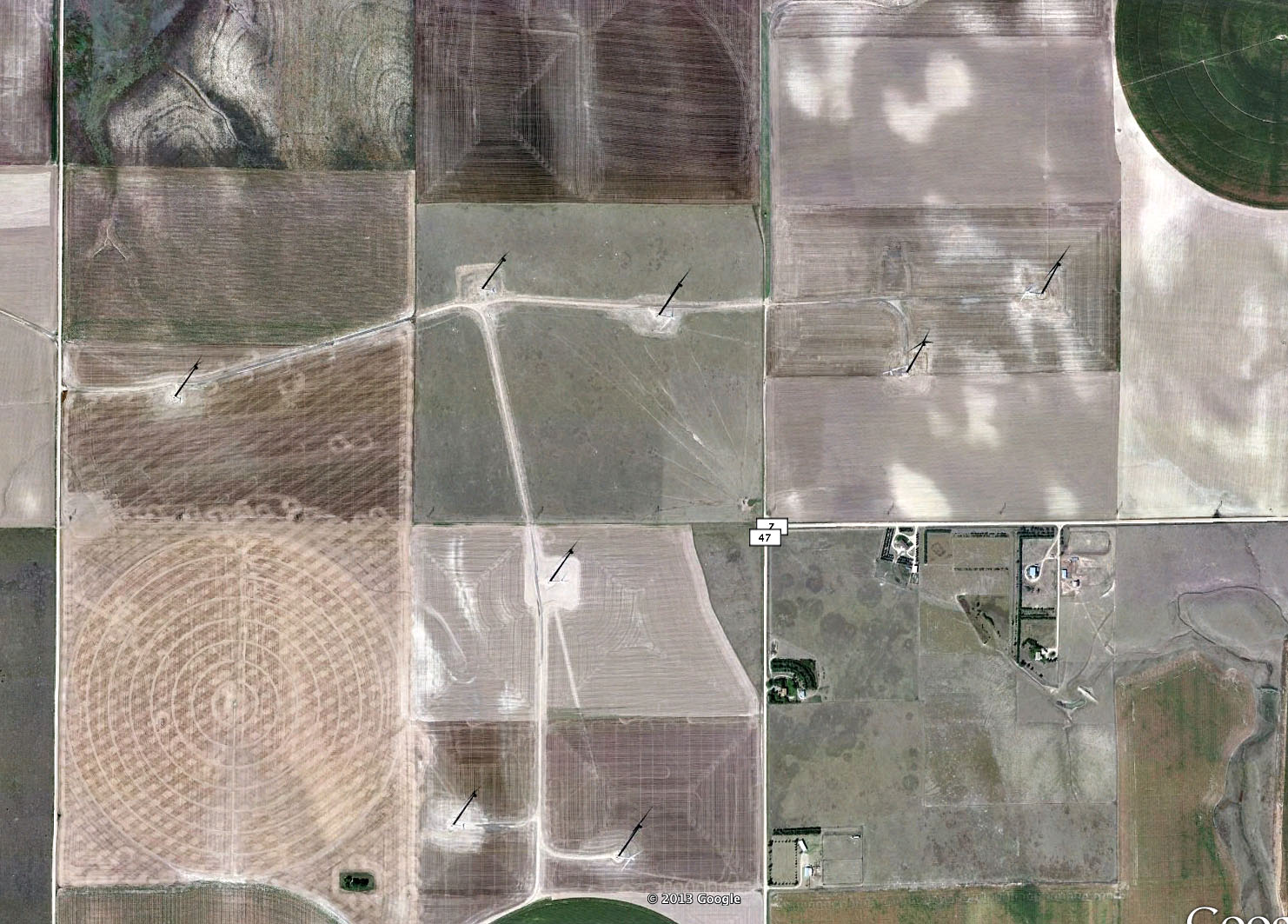 A field of Windmills

Next stop is Oakley. Just like Salina. Lather, rinse, repeat. 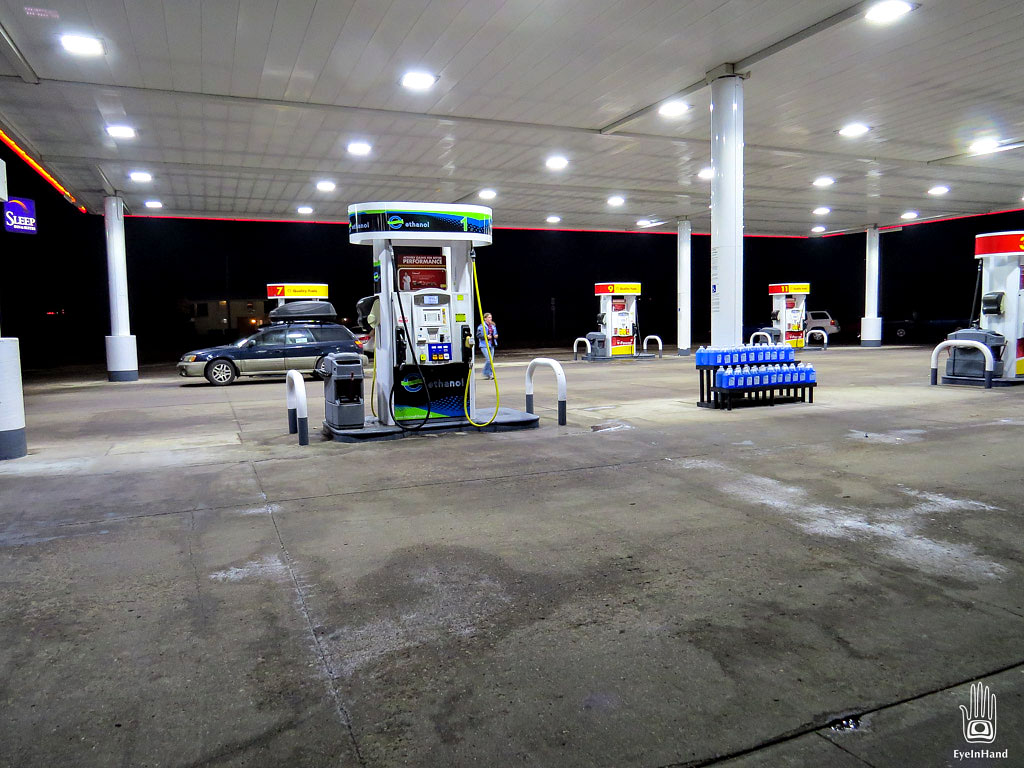 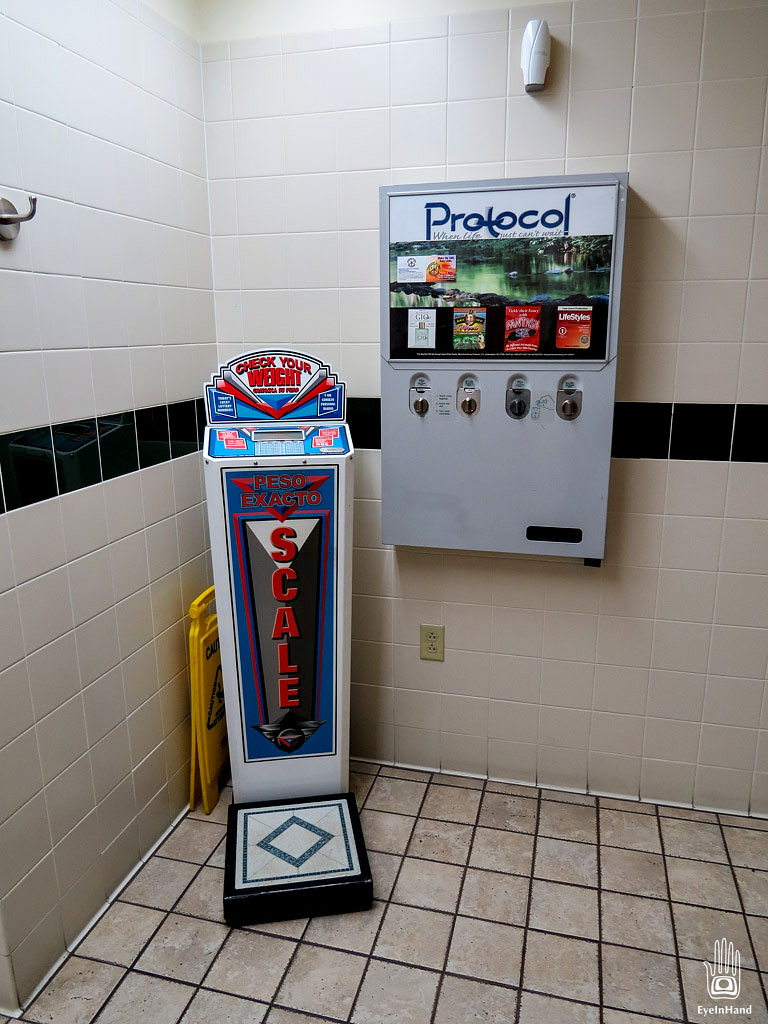 Different here, though, is a vile stench of excrement that almost makes us wretch. No one else seems to notice. This is not the fine, clean, almost pleasing odor of manure like we have back east in the pastures. There is something distinctly not right about it. Maybe a cattle truck just passed? But no, it’s persistent.

There’s a small lighted sign on the road next to the station. A CAFO feed lot. I pull up our location on the satellite view and see that the little sign is misleading. This feed lot, so potent I thought it surrounded the gas station, is a mile away. But it’s enormous, covering nearly two square miles just in fenced lots and buildings, not counting the runoff containment ponds. It smells that bad a mile away? Just, wow. 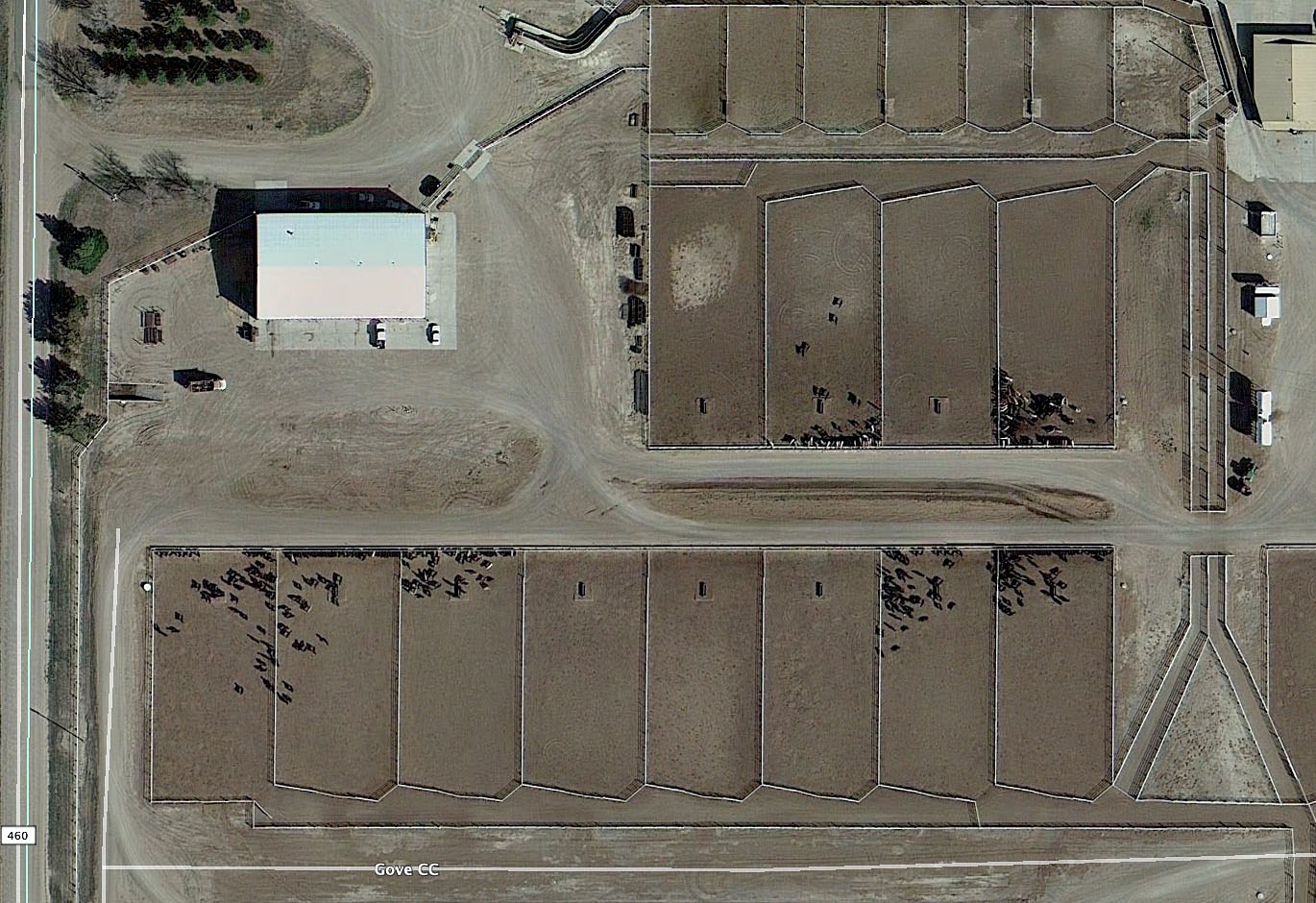 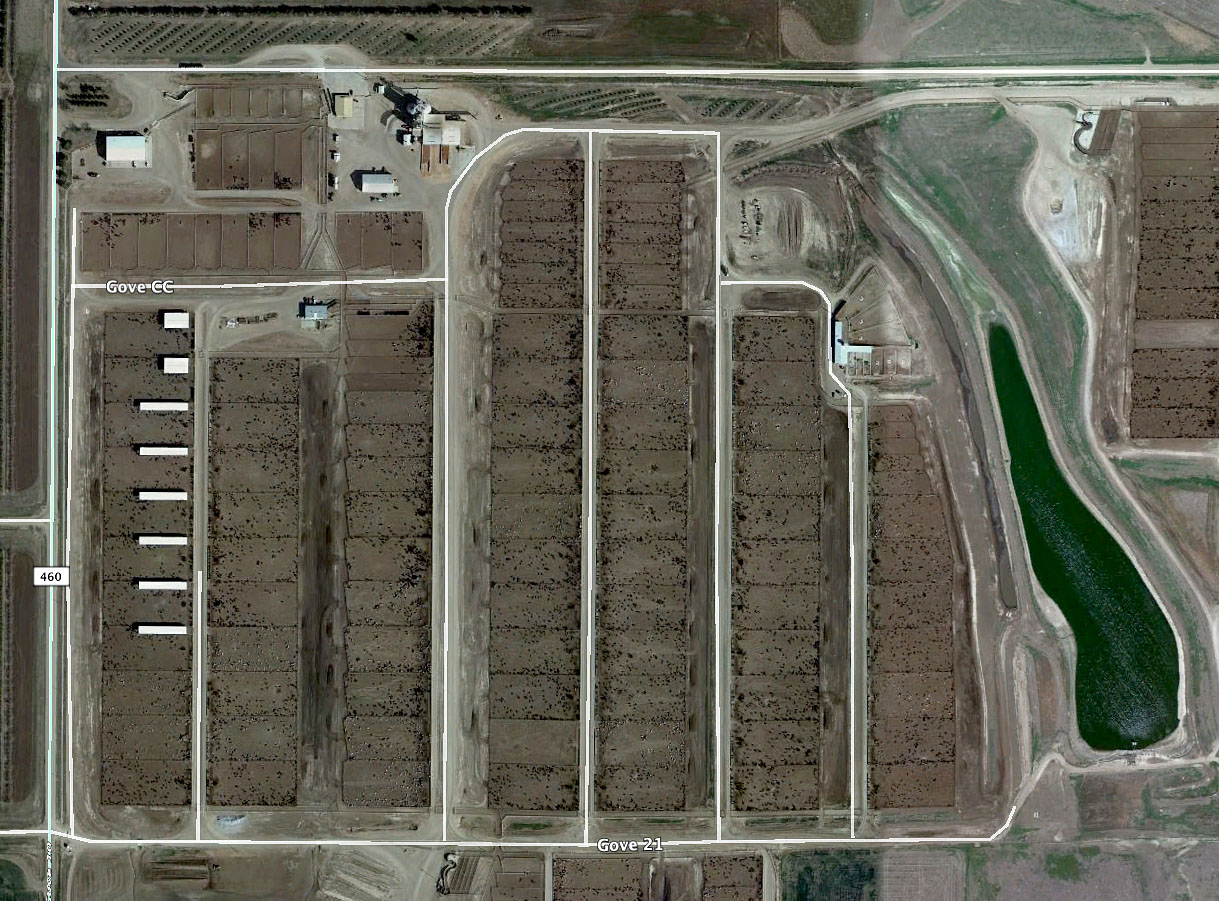 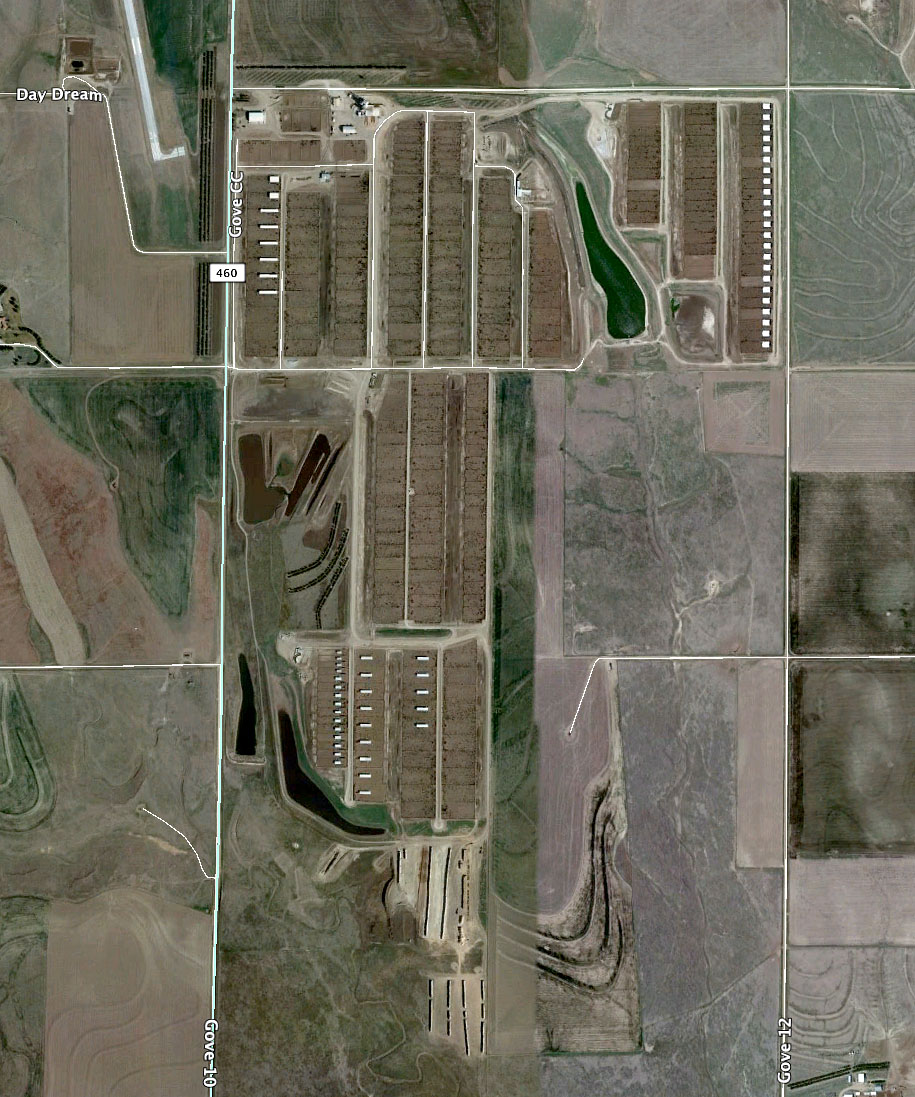 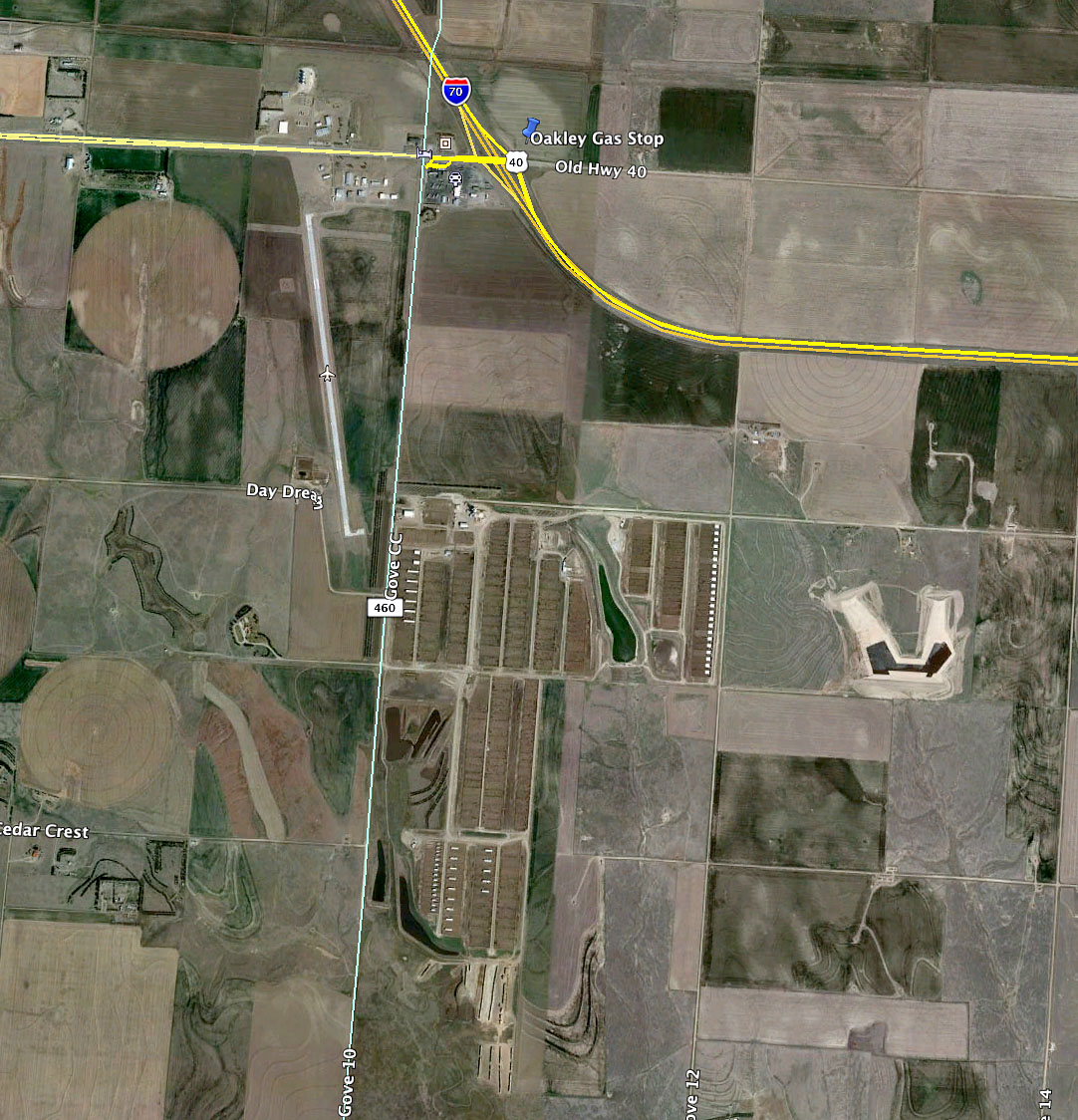 Inside the truck stop people are scattered around the restaurant – families, whole extended families – eating steaks. They talk and chew their food like everything is normal, as though excrement is just what steak smells like.

Upstairs there’s a gallery of stuffed deer heads – really fine specimens, lots of them, and a stuffed bison. Various other stuffed animals, too. More totems. These of fauna that formerly lived here, before they were killed off by people and replaced with cattle. 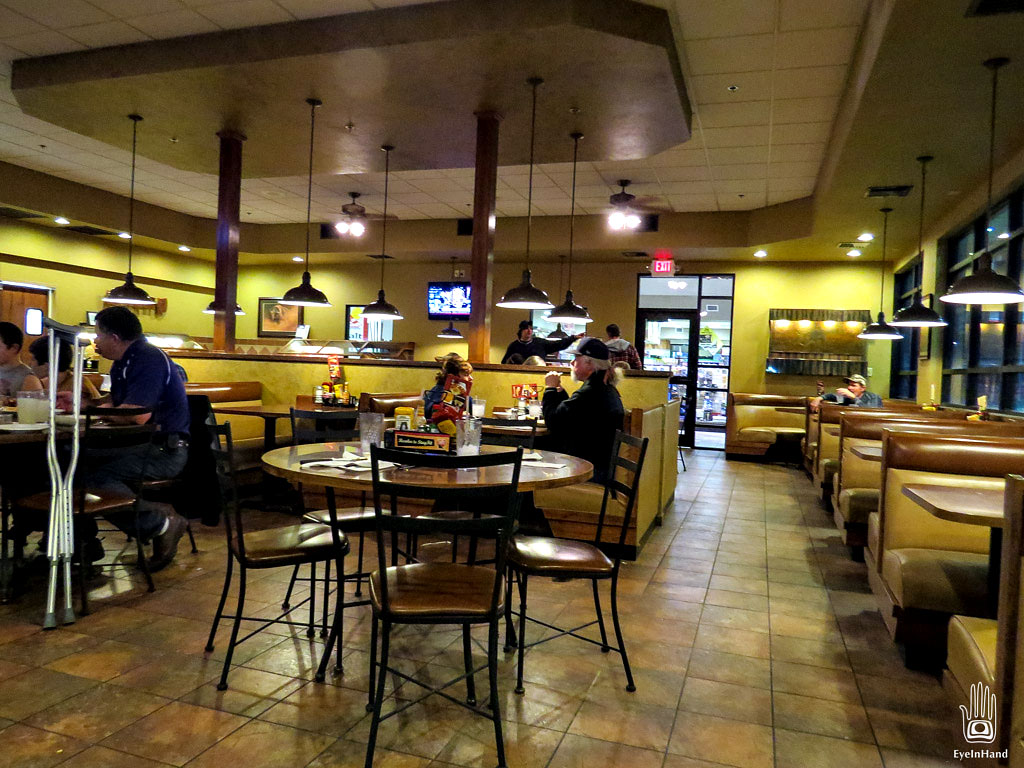 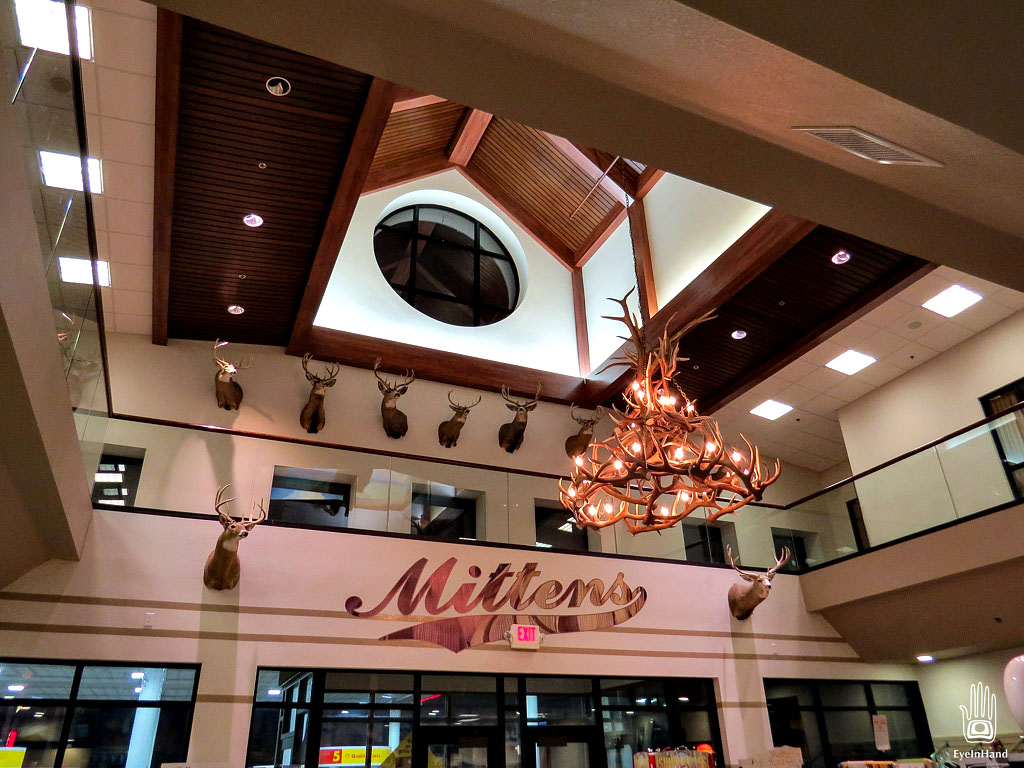 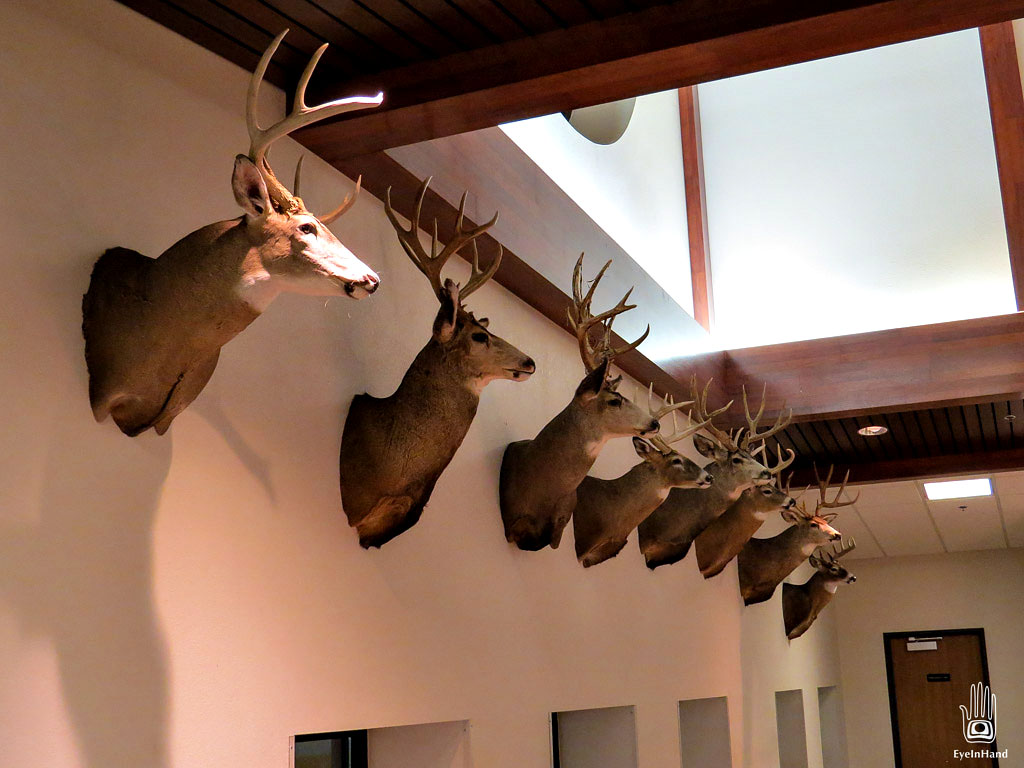 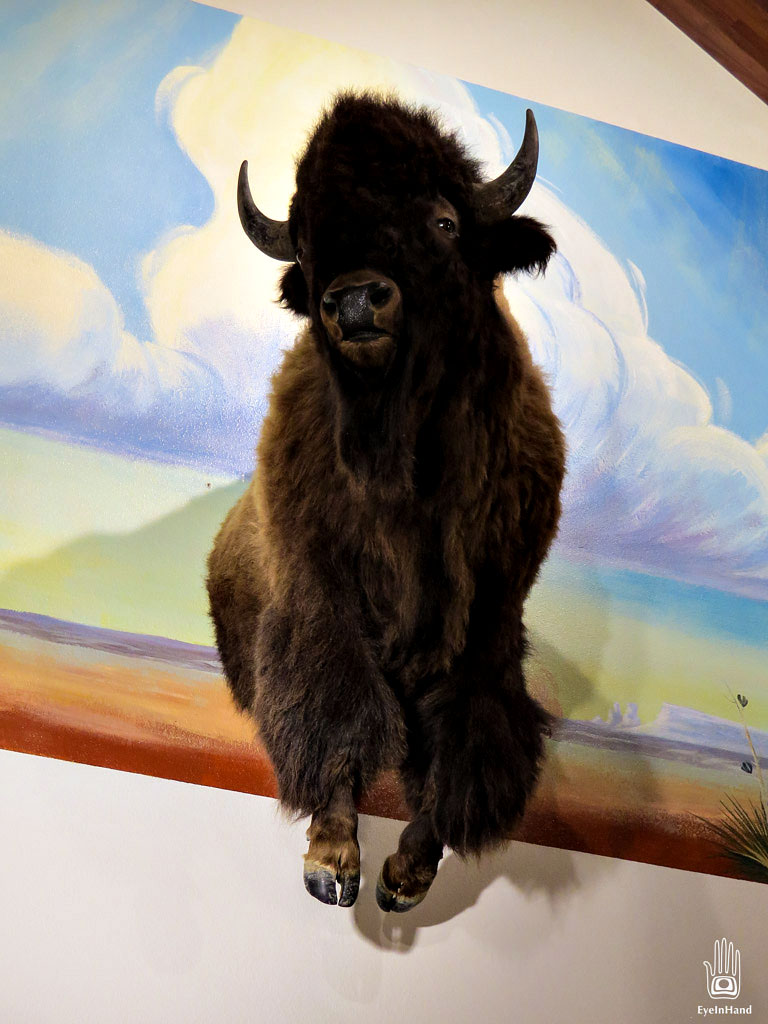 There are video games, most of which have guns attached – shooting type games in which you kill either animals or people. One shows a beautiful lush pastoral scene full of grazing pronghorn antelope. The demo runs and crosshairs fix a bead, then they fall dead with a crack of the rife. Then bighorn sheep, same thing. In the other corner there’s one with an assault rifle attached, and various anonymous figures recoil and fall in agony as they run across the screen and the gun fires relentlessly.

In a lobby off the balcony, a trucker sits in a big black vinyl barca-lounger. He’s feeding quarters into the arm, getting a mechanical back massage while he watches Fox News on a 60 inch TV. Downstairs, the sausages rotate merrily on the robotic spit, the gears slipping so it pops and thumps a bit. Popping and thumping for days on end.

Everything is a little glitchy, in an unsettling way. We load up and slip out as inconspicuously as possible. 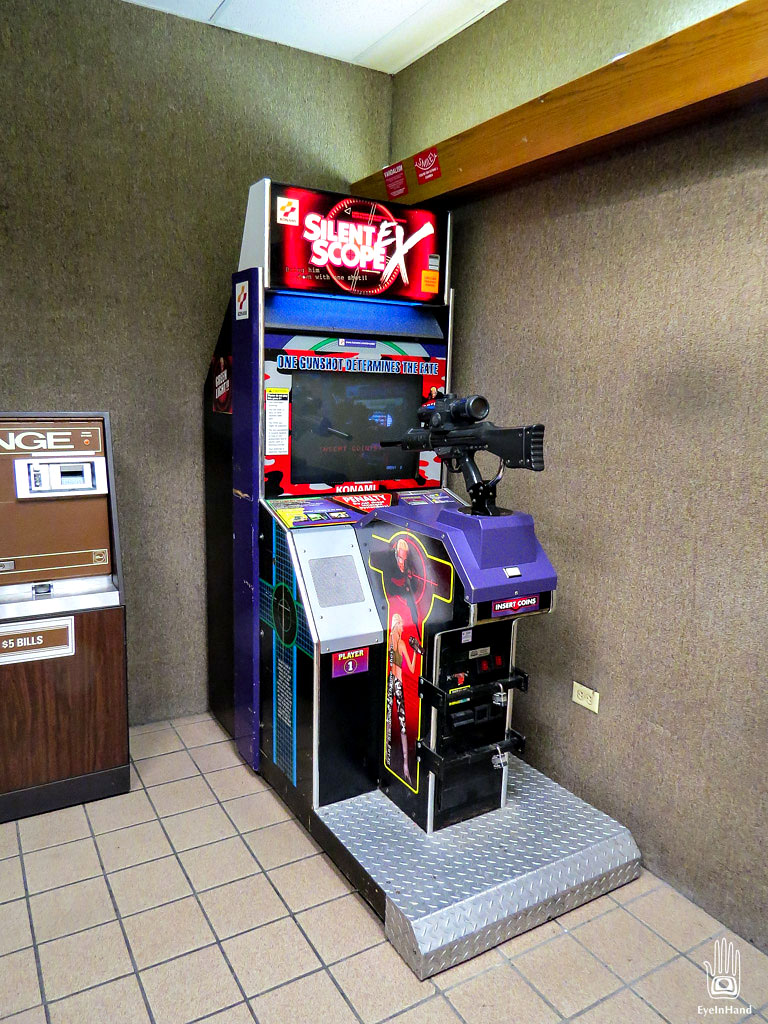 We hear from Terri once more before she turns in. She says on the satellite map we are passing through a big patch of green polka dots, could we see them? Then she laughs. With the real time view of our moving icon, she forgets the map itself is not “live” – our live position just super-imposed on an older image. The image was taken when the fields were still green, not in the dead of winter. And, of course, it is dark.

But the big green dots sound interesting. When I get back I look up what she saw, and indeed, that part of Kansas, and much of Colorado, looks like a sheet of green polka dot stickers. Center pivot irrigation fields. Really big ones. The small ones are each a half mile in diameter, four to a square mile. And all the plots are laid out in square mile grids, even oriented to latitude and longitudinal lines. Some big circles are even a full mile wide. I ponder how long it takes to walk a mile. 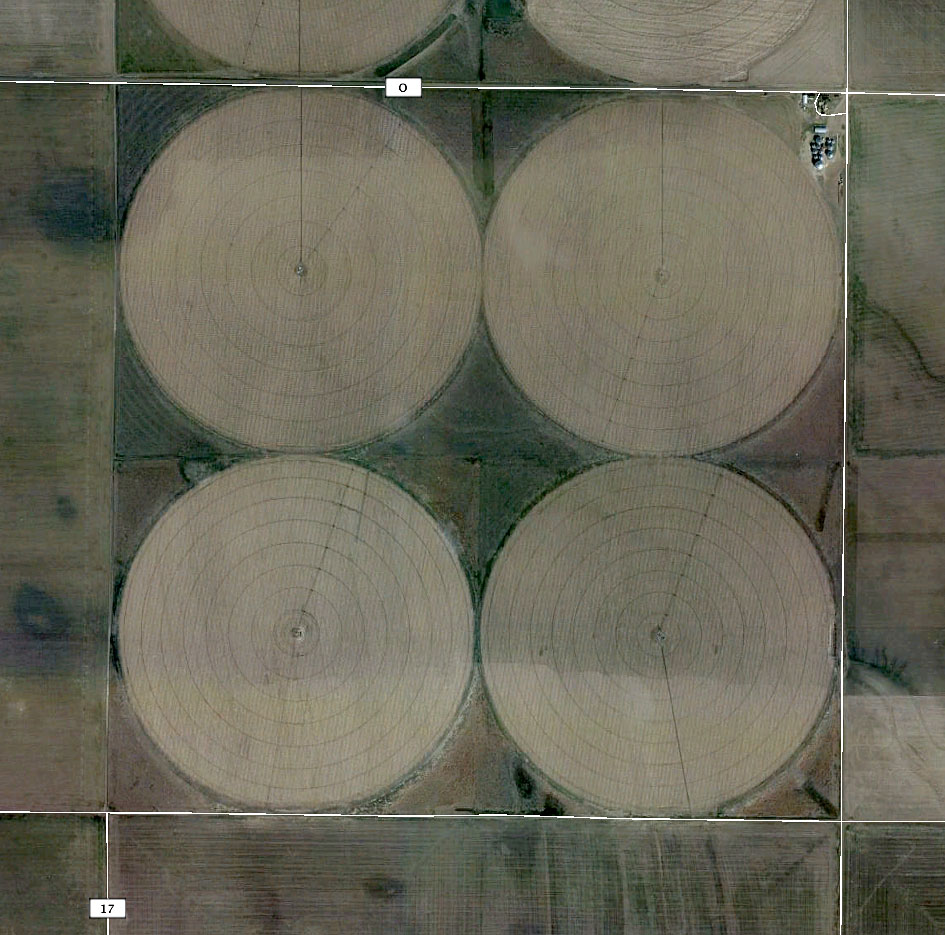 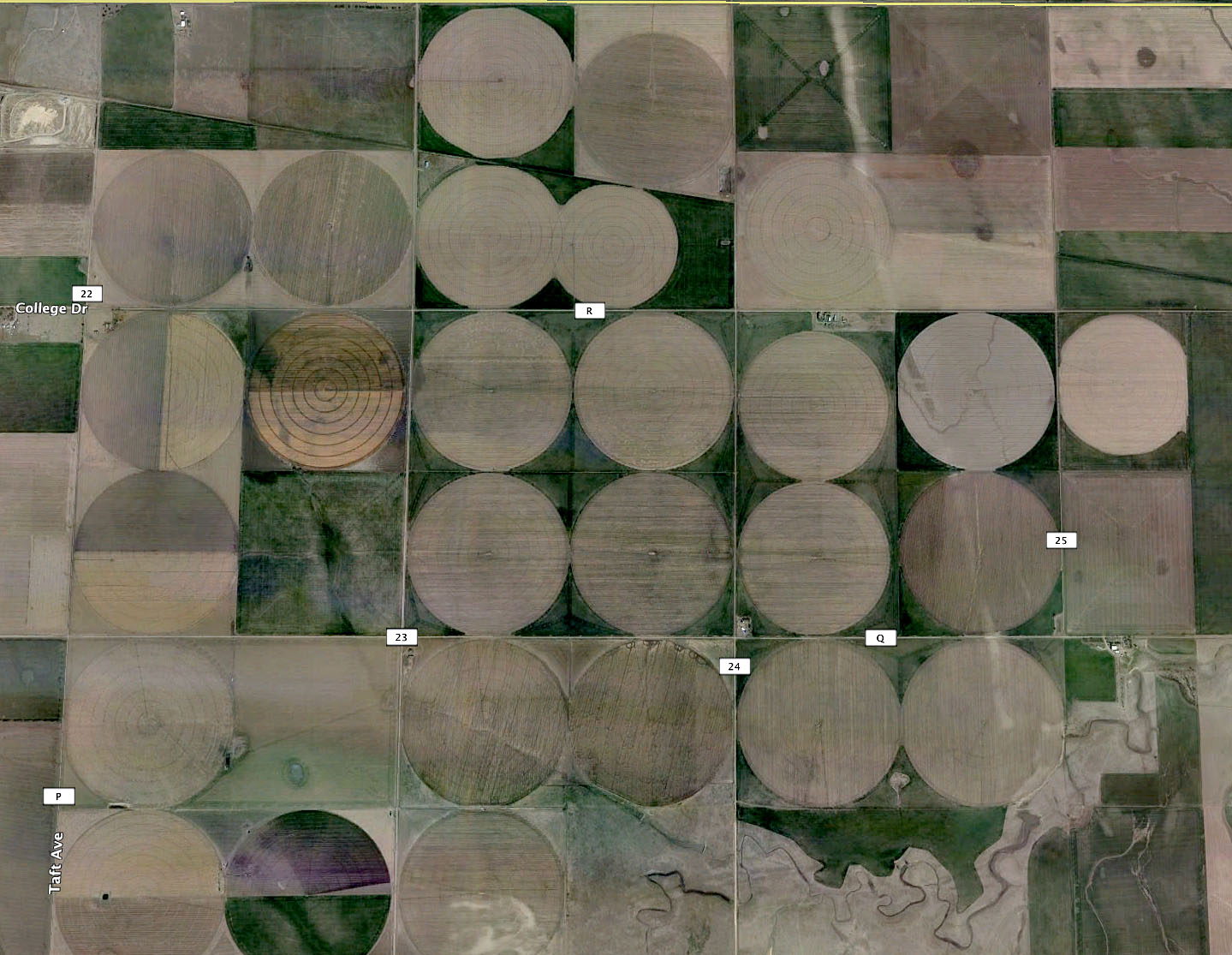 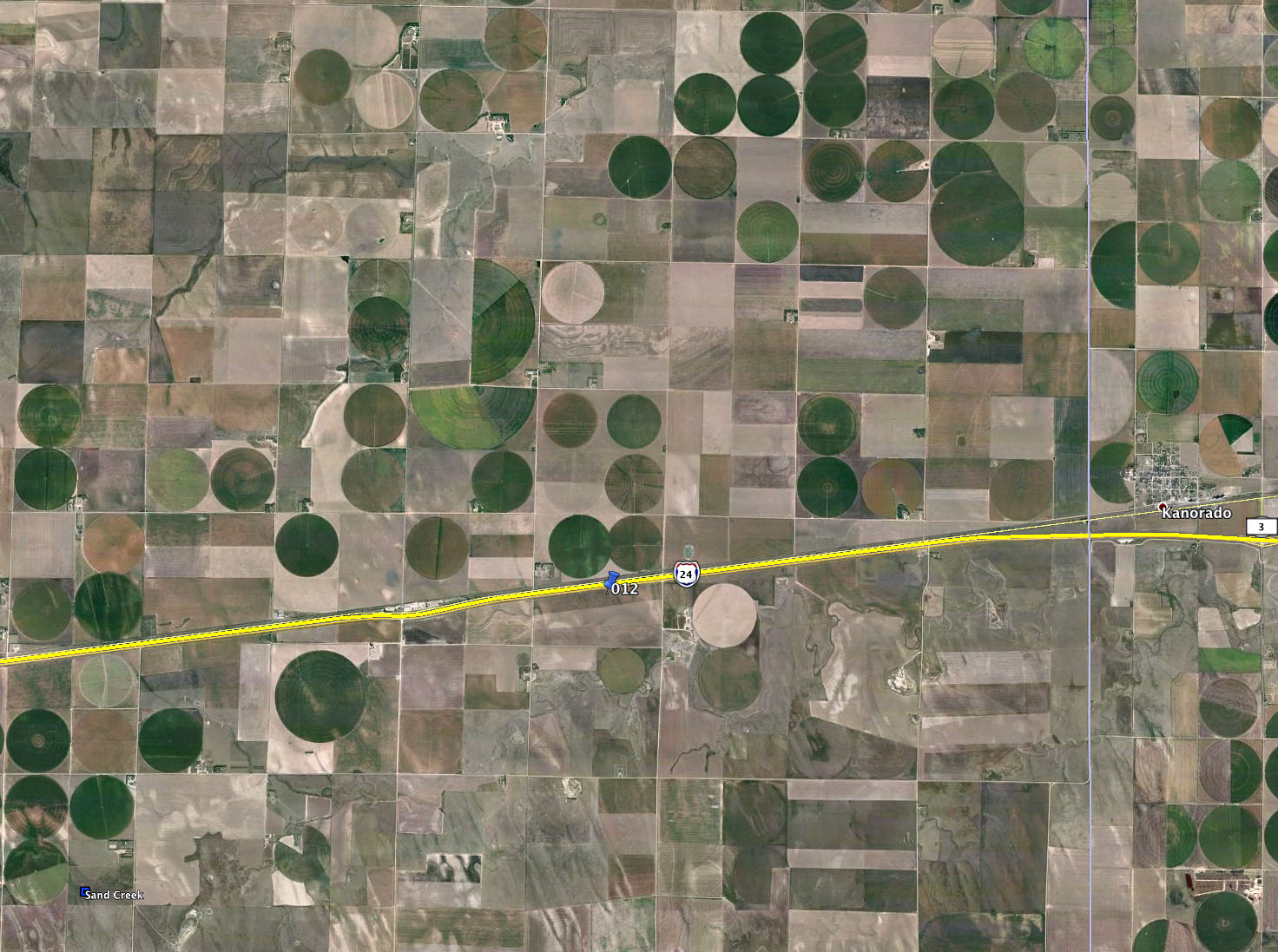 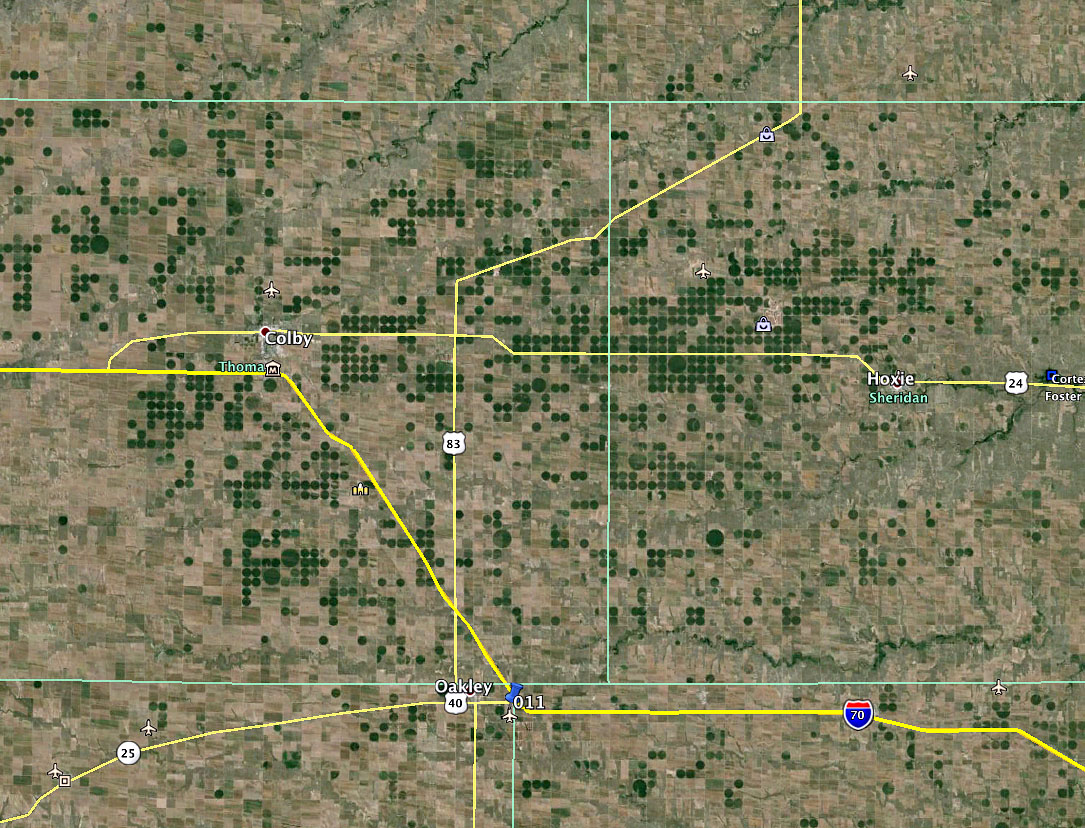 When you see how many there are, and how big they are, how much land is actually productive only with intensive irrigation, you realize how dependent we are on access to water. I remember reading that the aquifer that runs under the entire midwest has been depleted faster than it can replenish, and has been draining for decades. With draughts now becoming longer and more intense, it will be drained faster.

Makes you wonder what we’ll do when it runs out.