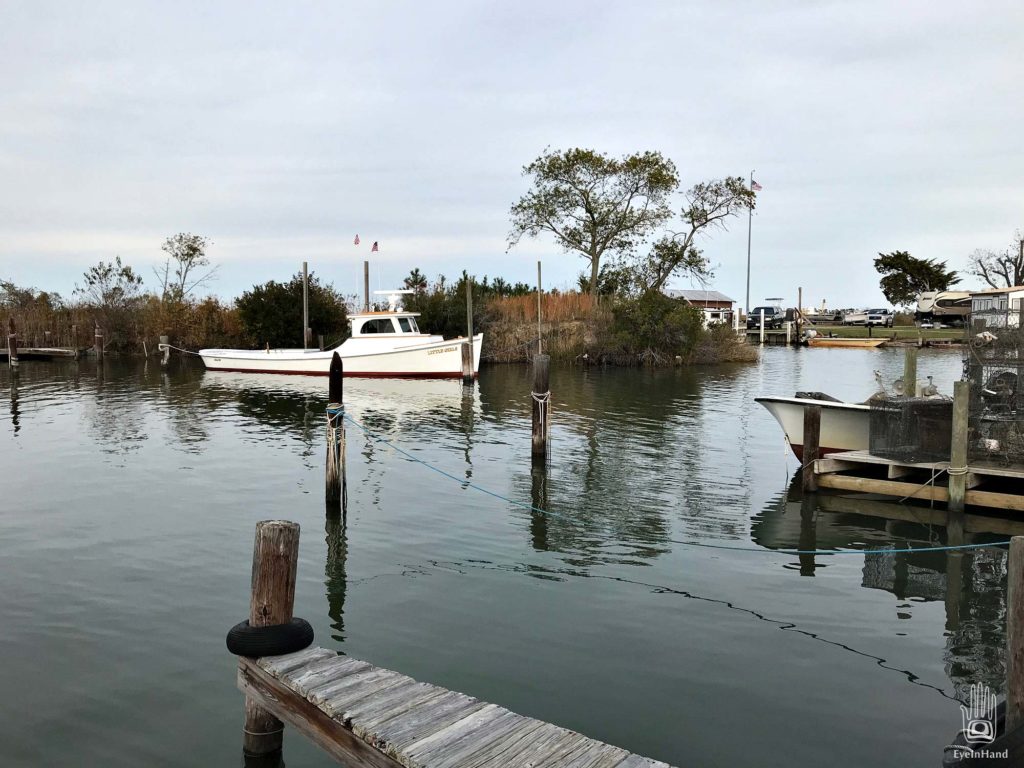 The directions were a little vague. Arriving on the downwind leg of the afternoon, we followed not so much directions to this place as a description of it. Our friends decline cell phones. Their farmhouse is lined with shelves of books, the kitchen with jars of food from the garden. They don’t use the internet; no email or texts. They send hand-written notes by mail, or call on a land line shared with another couple. Not much help here. There’s no land line out on the island, either, so we can’t call to be sure.

This feels right, though – they’re good with words, our friends – but we’re going a bit on faith, like looking for a place you only know from novels. 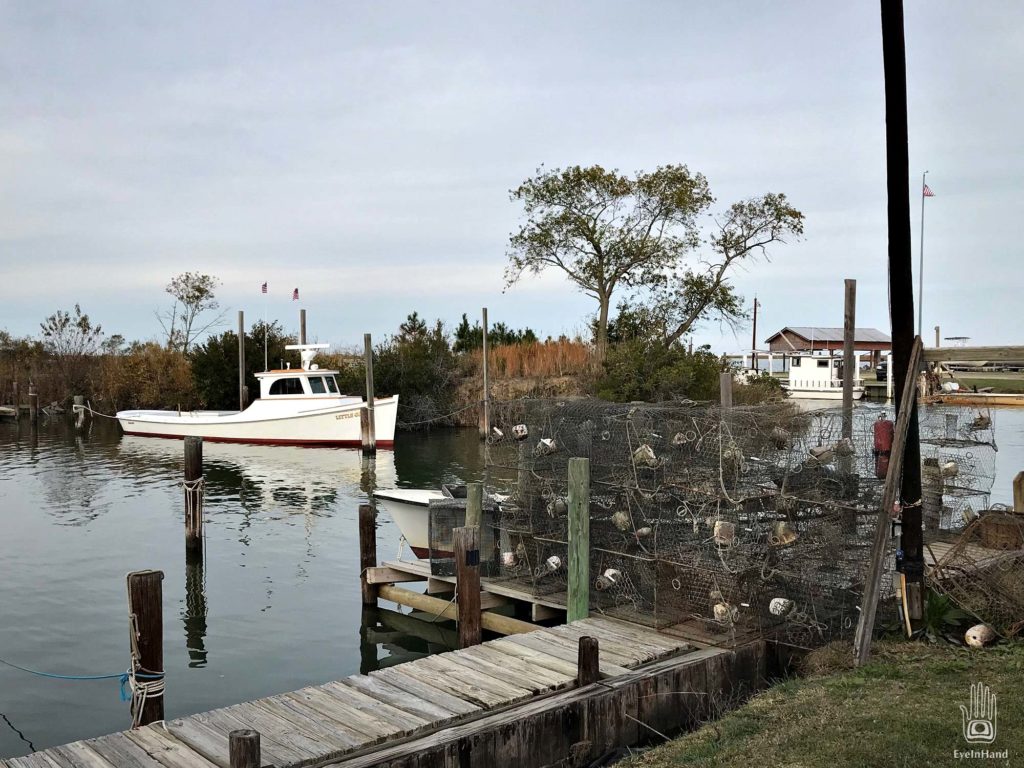 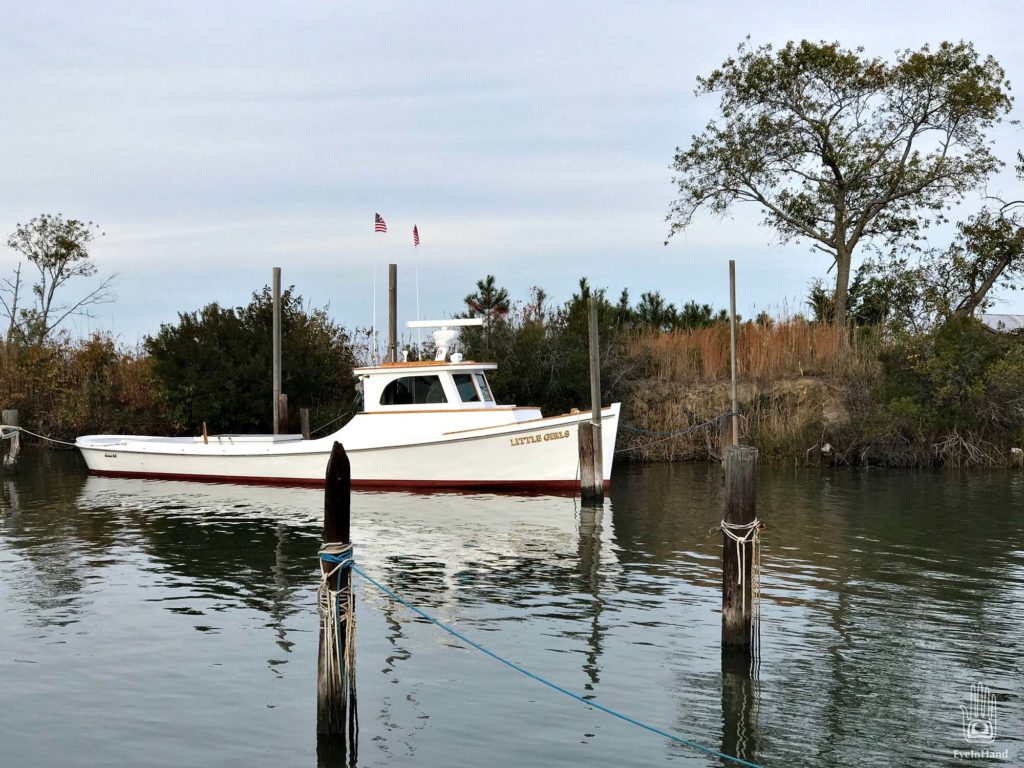 In the small harbor is a newly refinished deadrise, some work boats hard used, another deadrise canted over hard ashore by a storm. In the harbor mouth is a Buy Boat tied up to the wharf. 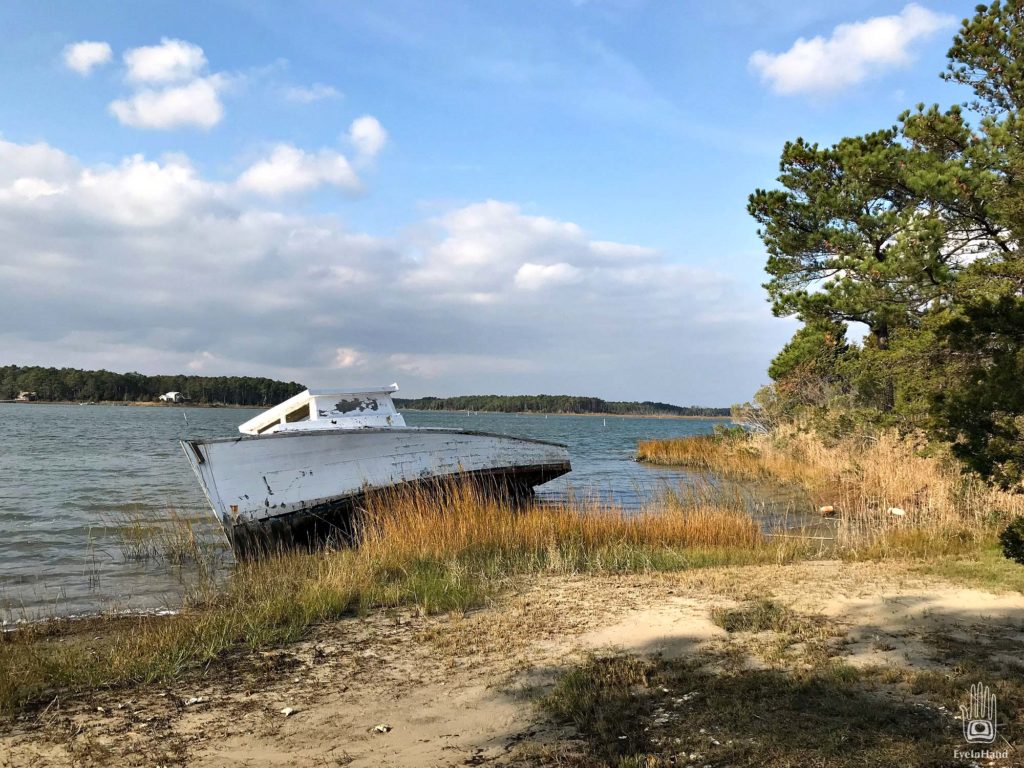 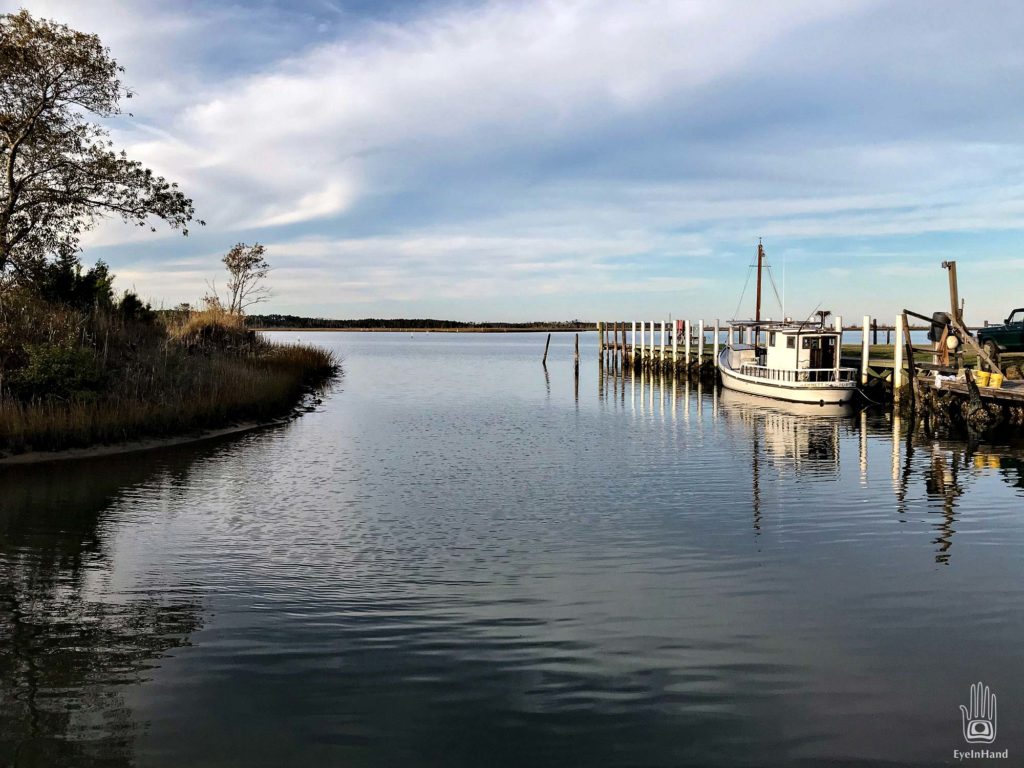 But on the docks, among oyster baskets and crab pots, a pile of odd gear hints we’re in the right place: colorful tote bags, a wooden box flecked and fingersmeared with paint, bags of groceries, the incongruous collection crowned by a wooden stretcher frame for a painter’s canvas. A flat bottom Carolina skiff putters into the harbor and ties up to the dock next to it.

“There was a lady here a while ago. I don’t know where she went. Back to town I guess.” The man in the skiff wears a wool jacket over cammo pants. Lights a cigarette. “Maybe she’s coming back, I don’t know. I carried five others out there earlier. They said you were coming. You build that boat?”

We chat about the Melonseed for a bit. He likes that it was designed for hunting ducks, and can see that. Knows about the old skiffs used to float cannons out into the marshes. Takes a keen interest in the wood used. He says he built that Buy Boat from a salvaged hulk, down the road in that big two bay shop we passed on the way in. Has a lumber mill in back, milling all the timbers and planks himself. Wants to know where I got the Ash for my rubrails. He makes the long handles for oyster tongs, used by friends in the area, and Ash is best for that. Stiffens up when it gets wet. 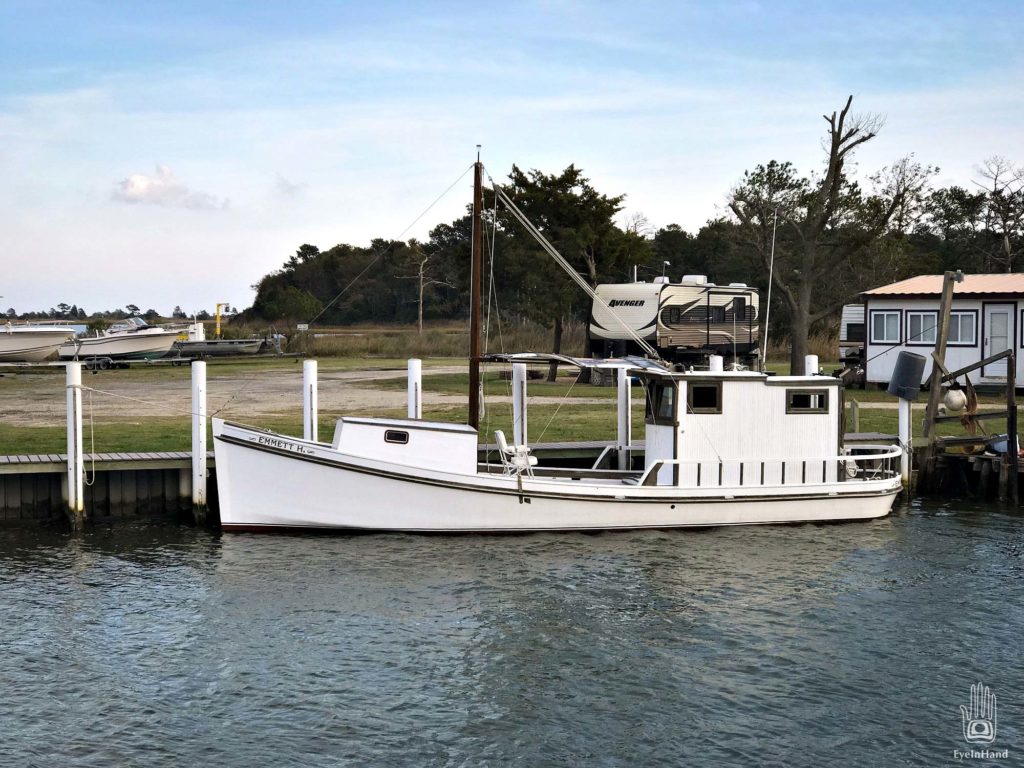 Lindsay returns, the lady of the painter’s frame. We load bags and water jugs and coolers and groceries into Wesley’s skiff – everything we’ll need for a week on the island, including bedding. I sit next to him so I can pick his brain on the way over, and will ride back to fetch the Melonseed.

We have friends in common, turns out. He knows John and Vera England, and goes along on the Buy Boat cruise they organize every summer – six or eight boats traveling to the Eastern Shore or the Carolina Sounds for weeks at a time. Good people, and we both admire the work John does.

It’s high tide, so the marsh is full, but he points out the channel as we weave through the creeks for reasons not obvious, says the mud is not exposed at low tide, but almost, and be careful, the water has already turned cold. I notice duck blinds in the marsh, renovated with fresh reeds for the season. Tells me about the history of the house and the island, and the harbor, how big boats – tugs and barges even – used to come in through the inlet before it silted up.

Rounding into the last creek we see the island dock. It’s at the end of a long boardwalk that wobbles over the marsh for 160 yards from the house, just visible back in the trees. Wesley says he built the dock and the boardwalk himself. Milled the lumber, toted it up to Warsaw to have it treated, and back, then ferried over in the skiff a little at a time. 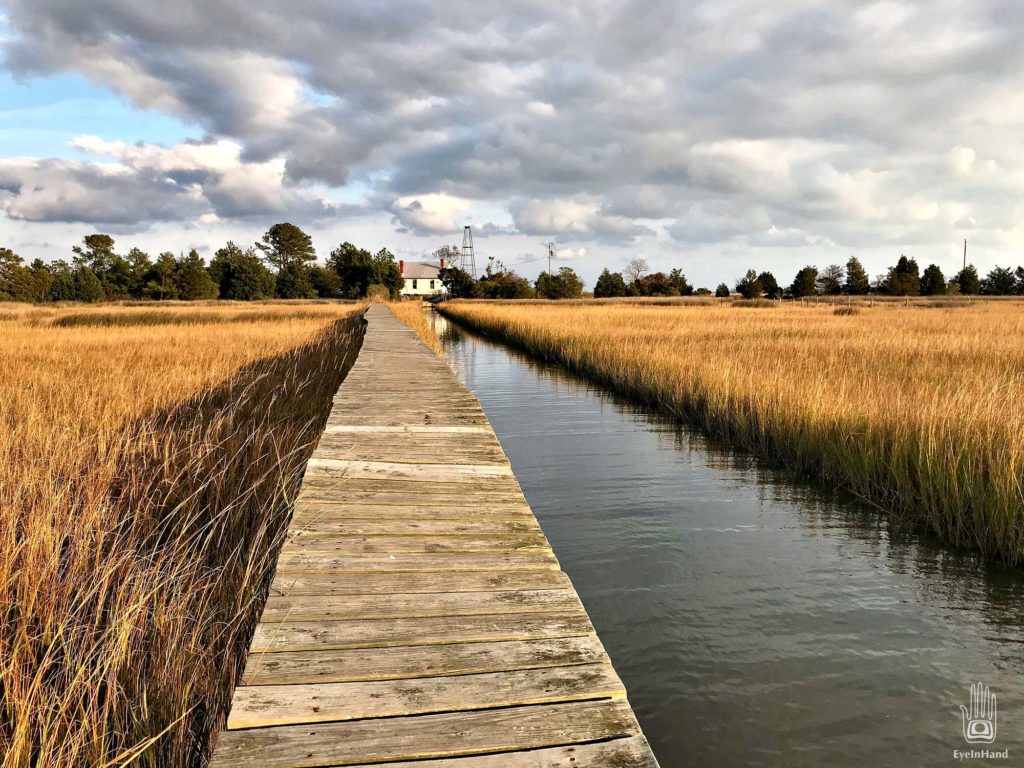 He rounds the dock and makes a hard left. There’s a narrow canal beside the boardwalk. Unlike the creeks, it’s straight as an arrow. With the tide high there’s just enough water we can motor all the way up to the house. The prop churns up black mud even at idle speed. We unload, and Terri says she wants to sail over with me. He backs the skiff all the way down the canal again, and we weave back through the winding creeks to the harbor.

It will be dark in an hour. Terri and I rig the boat and sail over in a soft breeze. The sun has dropped below the trees, and the temperature drops, as well. We pass the duck blinds, the crab pots and the fish traps. The wind is right, so on a lark we wave to those on the dock who came out to greet us and sail on past, ghosting silently and sweetly all the way up the canal. It’s so narrow the sail sweeps the tips of the sawgrass, like a girl in a white dress walking through a meadow.

It’s too narrow to turn the boat around, so we drop the rig and I pole back out to anchor in what I hope will still be water later. 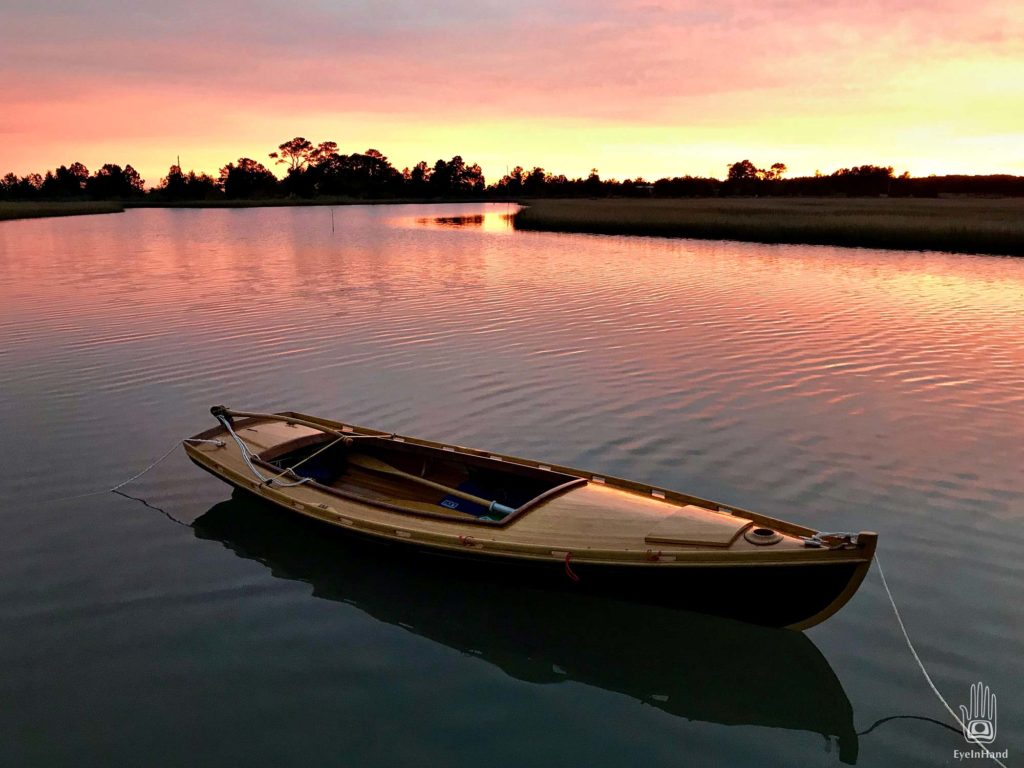 Hidden in the marsh, Clapper Rails set up an echoing call to each other just before dark, as they will every evening like this when the wind is still.

By then it’s full dark, and I can smell a fresh apple pie coming out of the oven. 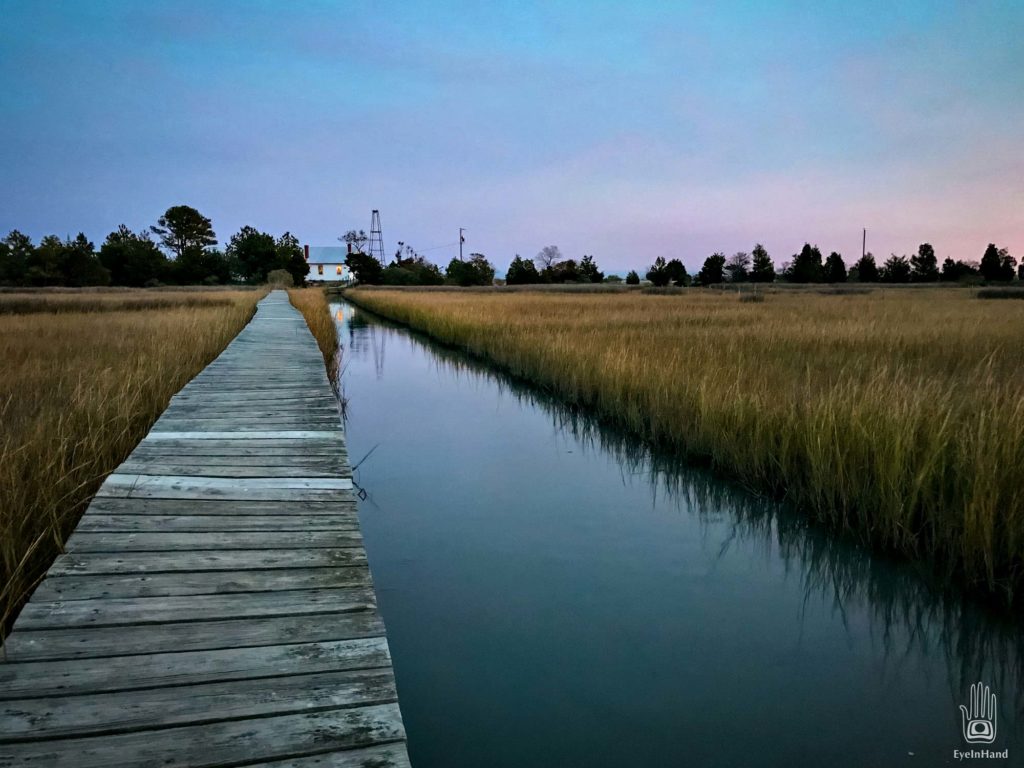 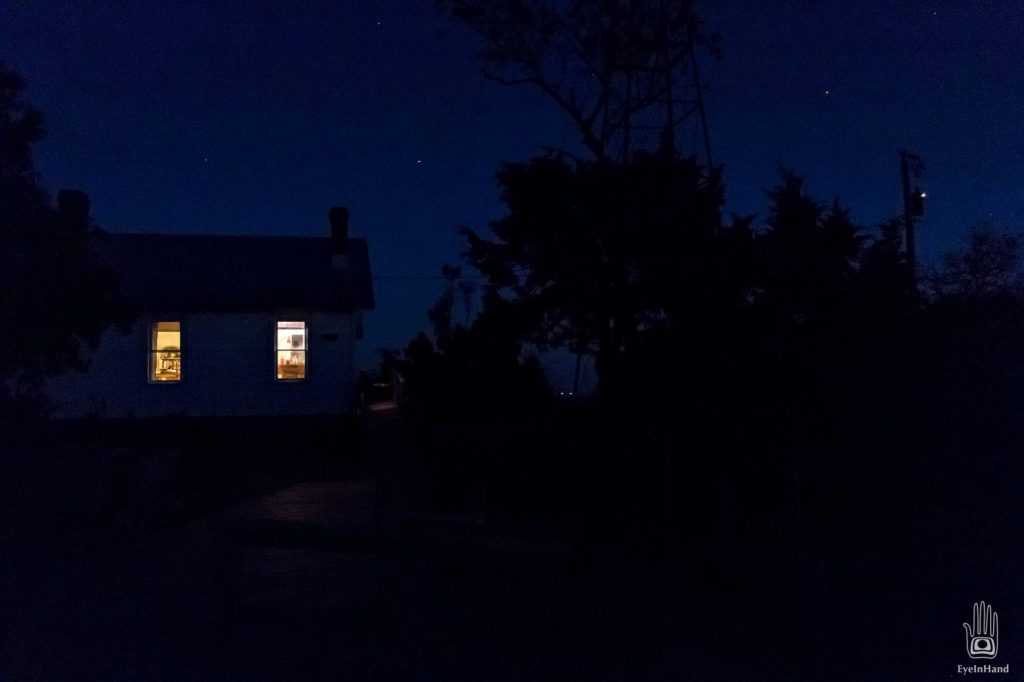 14 Replies to “Winter Harbor ~ Crossing Over”