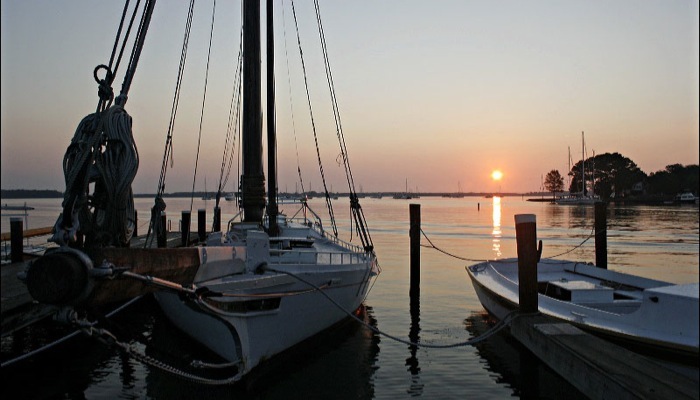 Rules are scarce and cheating is encouraged.

It’s a friendly crowd, and happily eccentric, quite content to dwell well outside the mainstream of high-dollar, high-horsepower, mass-production “Tupperware” boats. These are people who would rather spend four weeks sanding a small wooden hull smooth than spend four thousand dollars on a fiberglass runabout. Every day I got half a dozen invitations to go sailing or rowing, or was simply offered a boat to play with for as long as I liked. And, unlike at the big boat show going on across the Bay Bridge in Annapolis the same weekend, no one tried to sell me anything.  At night there’s plenty of beer, crabs and oysters, live music and sea shanty singing.

Saturday is the big race, held every year. Rules are scarce, and cheating is encouraged. With boats ranging in size from 8 to over 30 feet in length all racing against each other, there is very little in the way of order or regulations. Essentially, the only rules are “Go around the buoys” and “Don’t hit anybody.” Competition is fierce at the front of the pack, but for most the sole reward is seeing the Miles River awash in canvas. Unlike races in yachting circles, this one doesn’t end in law suits and protests; only beer, bragging and hyperbole.

I posted a new gallery with photos from the weekend. There’s a bunch, mostly because so many people asked for copies of pictures – I didn’t want to leave anyone out. Here’s a link:

Thanks to everyone to shared their boats, and advice. Next year I’ll bring mine.