You know when you’re so tired you do things like: spend ten minutes looking for the glasses you can’t find because you’re already wearing them, or the misplaced pencil you can’t find because it’s stuck behind your ear? Not a good time to be running power tools. I was so exhausted by last Sunday I had to take a nap in the middle of the day, just so I could get something done in the evening.

Before that, though, got the forward hatch trim done, along with the trim pieces on the front of the centerboard case in the same vicinity. 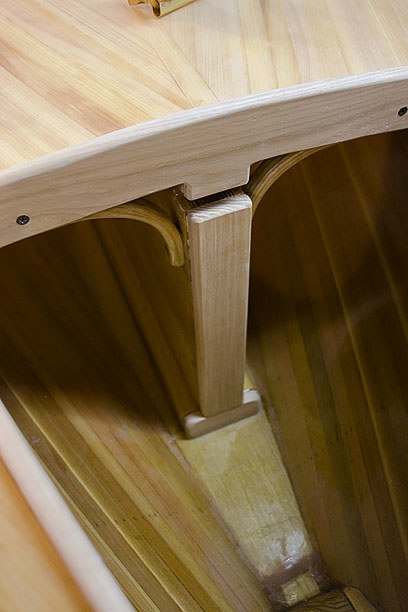 Later in the week I also got the Mast Collar done. This little piece is somewhat decorative, only because it’s so prominent. Mainly it’s there to keep water on the deck from washing down the mast hole. I may make a leather or rope gasket later to go around the mast and shed water down the outside. A lot of water actually runs down the mast itself.

I’m running out of Ash, so the donut was rough cut from a blank of white oak, then shaped freehand with a grinder, followed by a belt sander. To get the curvature of the deck, it was first roughed in with the grinder. Then I took a big sheet of coarse sandpaper I had laying around – sold in rolls for those big standup sanding machines for refinishing floors – and clamped it to the deck. The piece was then worked back and forth over the sandpaper for a few minutes until it fit snug. 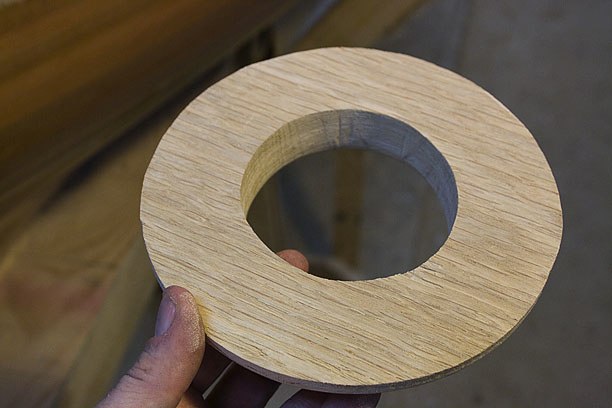 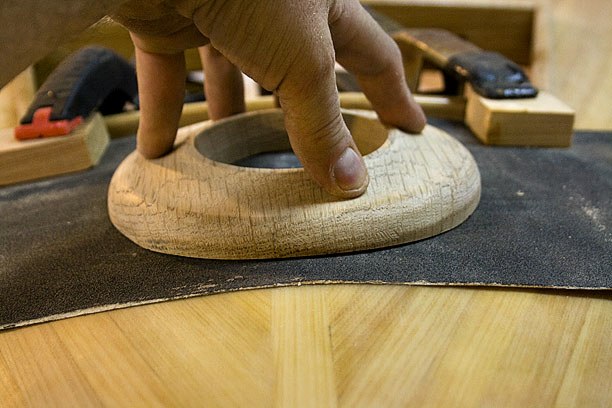 This weekend will be the Hatch Cover and final shaping of the Coaming, followed by Toe Rails. At that point the deck can be varnished. Doing the Toe Rails means I also have to shape the Stem, and also do the oarlock risers. Also on the menu is Rudder and Tiller and the Rudder Hardware, and that means shaping the Transom. That may be as much as I can hope to get done and still leave time to trim the Mast and Spars and get them varnished. I’ll have to save painting for later.

We’ll see how far we get. Only one week left.