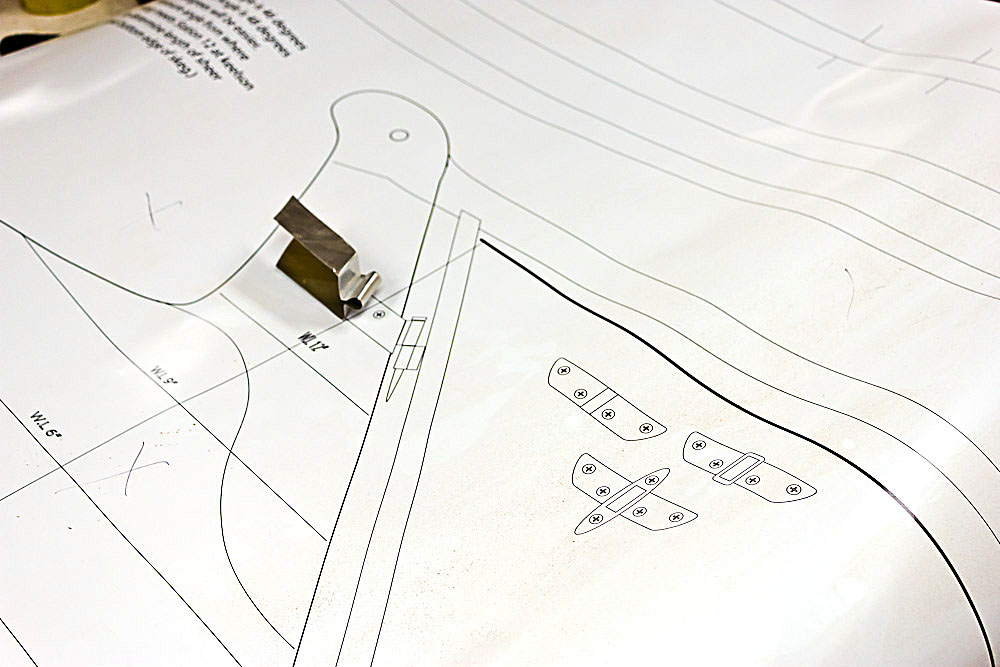 This is where I get myself in trouble.

To be honest, it’s very difficult to find traditional hardware for old style boats anymore. Most of what you find is stainless steel parts for production fiberglass or racing boats, which look terribly out of place on an old boat. There are a few specialized sources left – some restoration craftsmen who custom cast bronze, or a handful of places that sell reproductions of notable parts, usually for high end or collectable designs, for which people will pay top dollar to restore an original, or commission a reproduction. There are more sources for the most common parts, such as cleats, fairleads, etc., but even here we’re talking perhaps a dozen at most. Options are limited.

Starting several years in advance, I collected the parts needed for these boats a little at a time. ABI, a Chinese manufacturer of bronze fittings, went out of business about the same time the project began, and I managed to get close-out stock of bronze blocks, cleats, and shackles from a couple of sources. Picked up a few more things off ebay, and some of the pricey specialty parts, like the bow chocks from Bristol Bronze, came as gifts from family. Eventually, I had almost everything needed.

There are some interesting make-do parts that I picked up locally and will use in a manner other than they were intended (more on that later). I still have a few small odds and ends to fashion myself. I may be able to use off-the-shelf oarlocks, but won’t know until the boats are in the water if those will work, so could end up making those. I already had to make brass turning blocks for the centerboard controls. I could have easily bought something usable for those, instead of making them, since they’re completely hidden. But I needed a warmup task for what I knew was coming later – the Rudder hardware.

The big challenge, however, is rudder hardware.

Options for bronze rudder hardware are extremely limited. Only two or three styles can be bought, at least that I could find. Still, they can be made to work. Other people make them work. It’s not ideal – you have to fudge your rudder design a bit, making your the boat fit the hardware instead of the other way around – but it can be done. And this is where I get in trouble. It’s becoming obvious I have problem with this sort of thing. Maybe I should see someone about it.

When you buy gudgeons and pintles off the shelf, you have to make the thickness of the rudder to fit the opening of whatever pintles you find, or fudge a way around it. What makes it tough, is the Rudder stock, or neck, is reinforced with cheeks, and thicker than the blade. If you find nice bronze fittings, the pair will be made for the same thickness top and botton. With a some of care and planning you can pull it off neatly, though. It is, however, a pain in the butt. Roger Crawford uses nice bronze hardware, and has adapted his rudders to fit. He does a tidy job of it, but I’m sure he would prefer the hardware fit his rudders, instead. 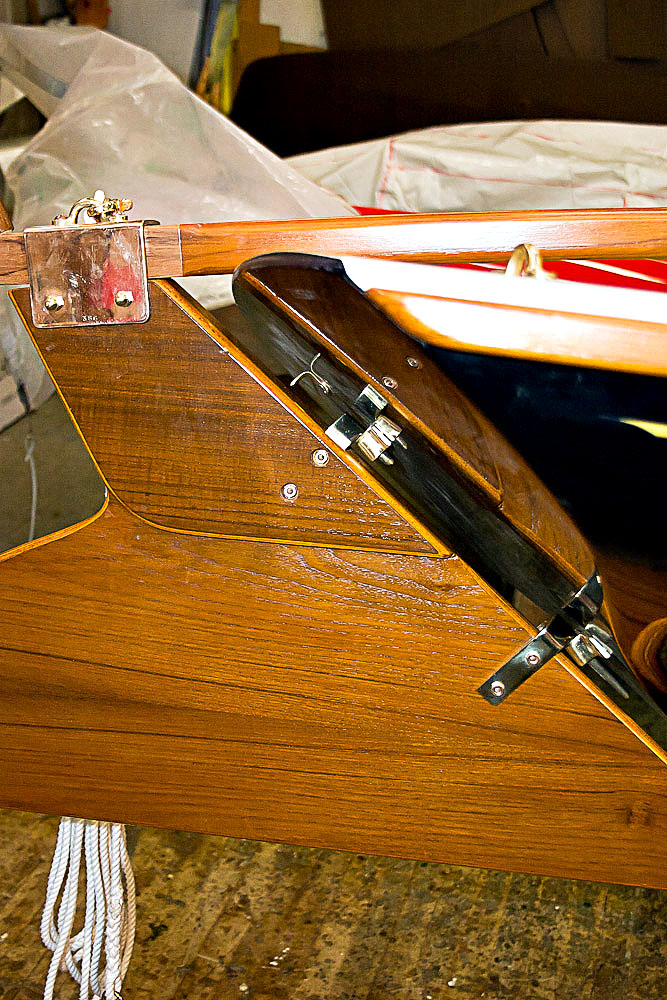 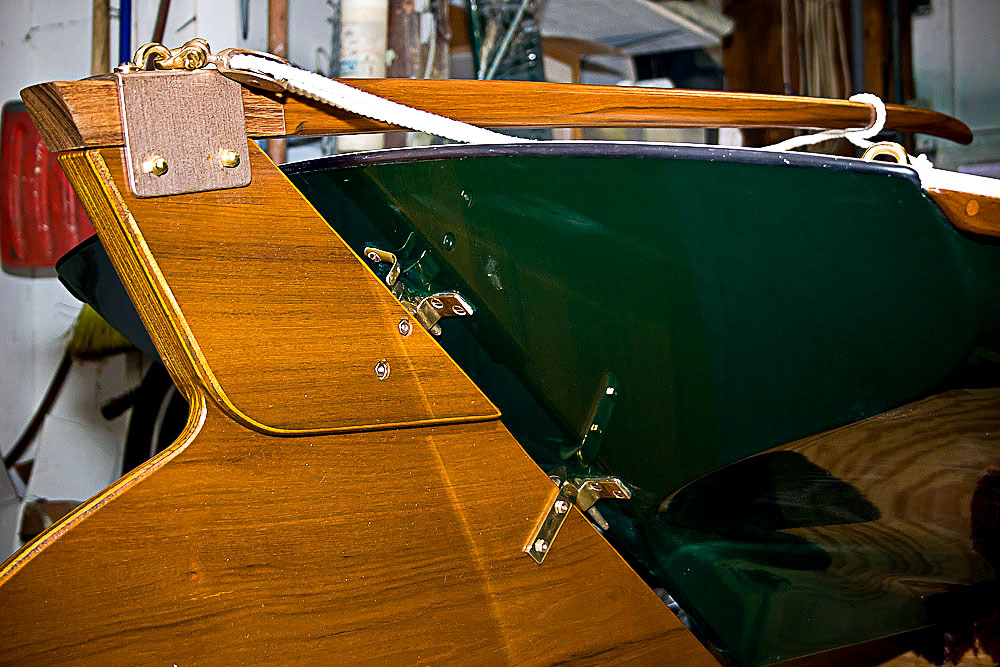 Many people do what Tony Thatcher did – make the rudder one consistent thickness all the way up to exactly fit the pintles. A simple and elegant solution. 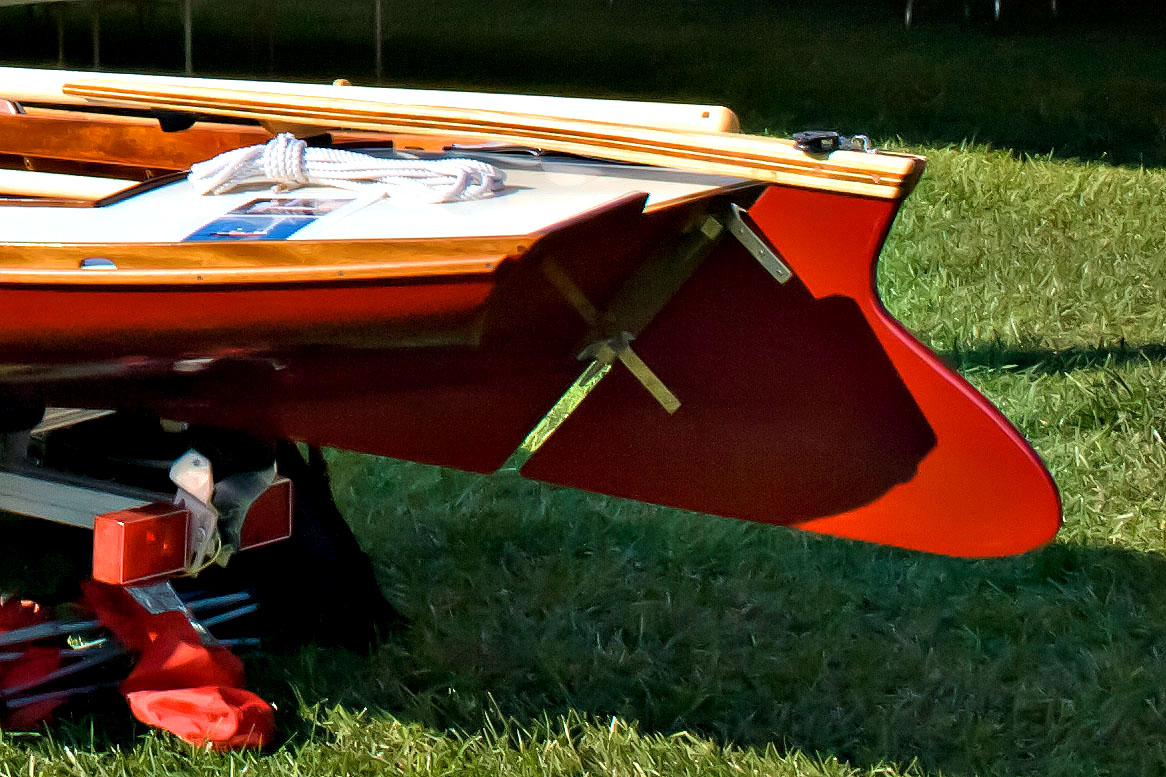 The problem, for me at least,  is all the stock versions are technically made for plumb hung rudders. 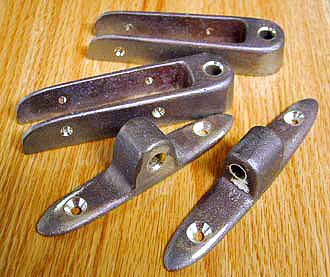 That means on a raked transom, like these, the hardware has to angle down. 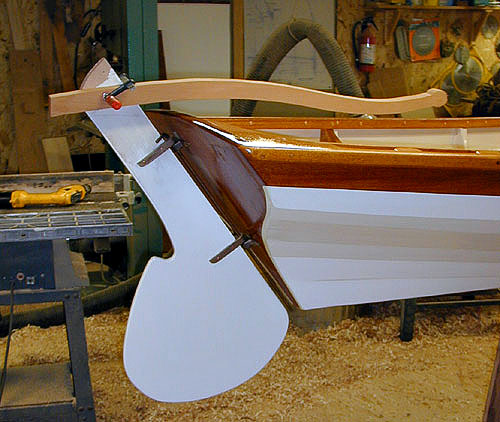 Maybe you just have to be cursed with an eye for these things, but all the lovely lines on these boats flow so gracefully and naturally in sync with the waterline – following the flow of water along the hull from bow to stern – that when you end at the rudder with something that suddenly breaks that pattern, and dips down at an odd angle, it seems to stand out more than it should.

The only way around either of these issues is to make your own hardware.

I may not be the only person who has noticed this, because I’ve found at least two people who also decided to make their own rudder hardware. The now iconic 16 foot Melonseed American: 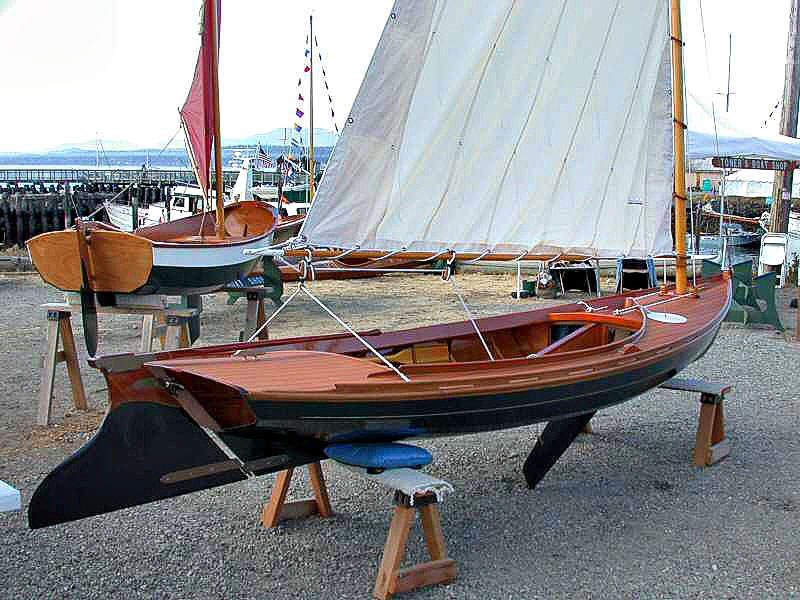 And one inspired by it, the Don Scott’s 16 footer in England: 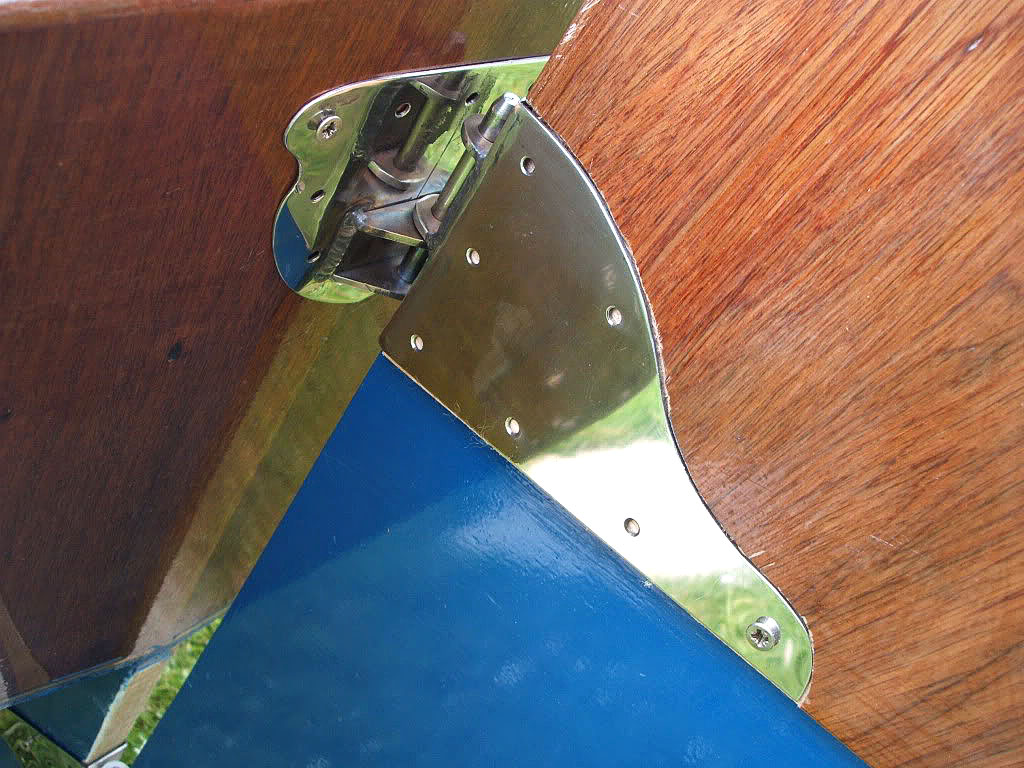 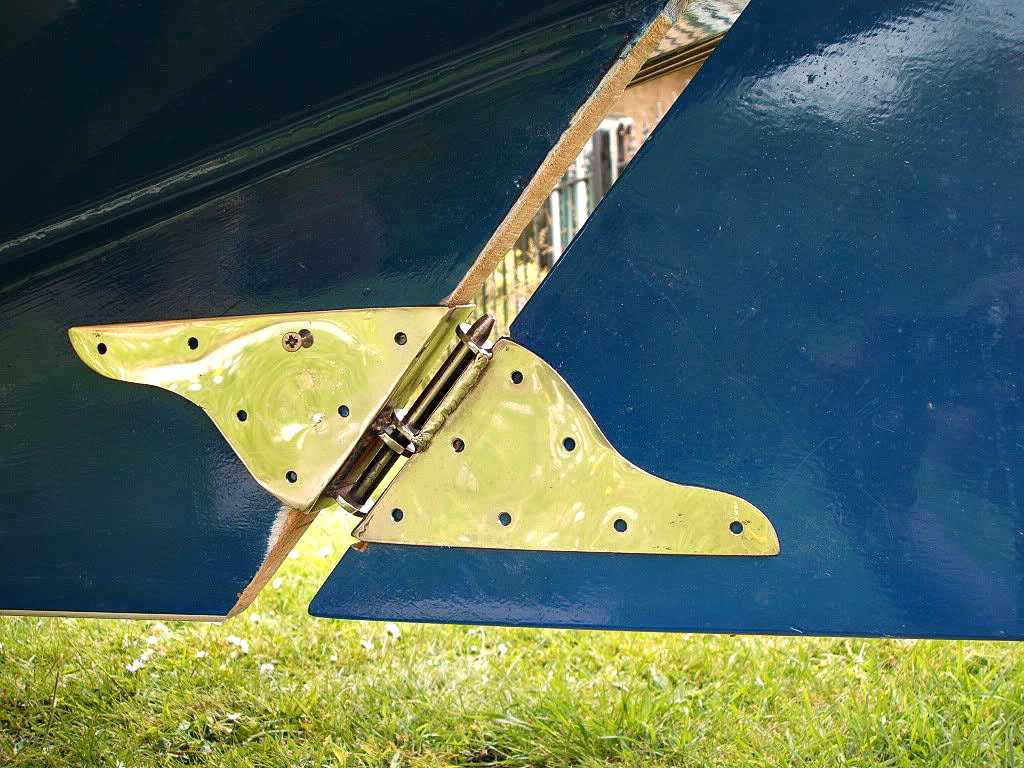 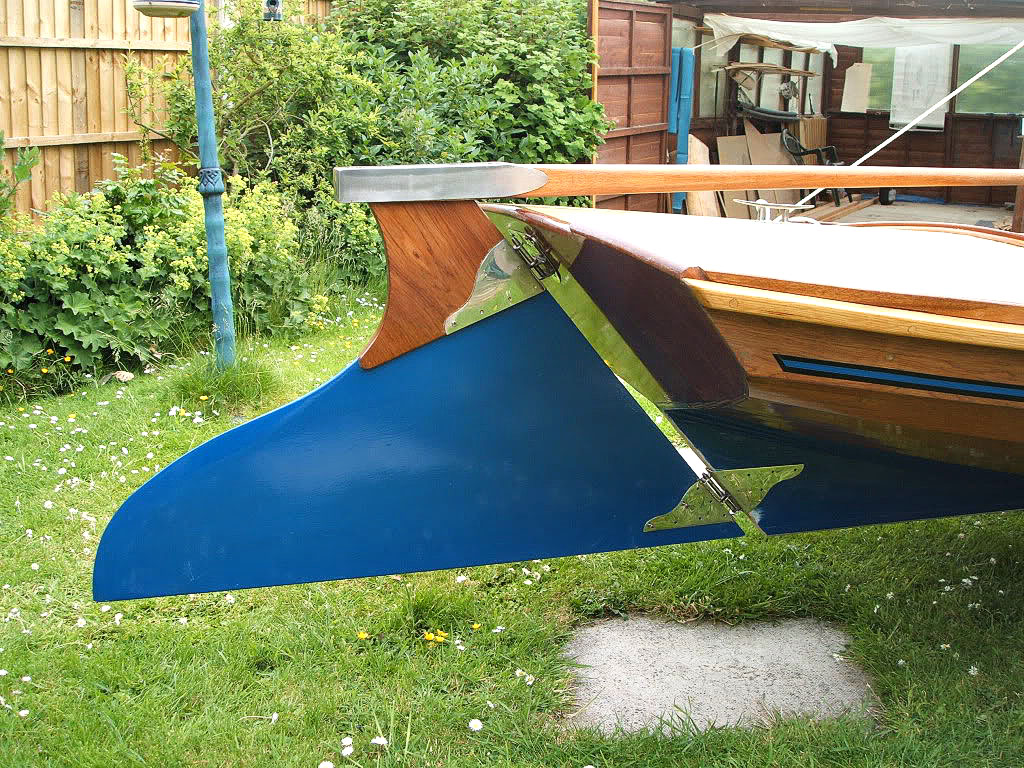 Seeing that other people could make this specialized hardware made me think maybe I could, too.