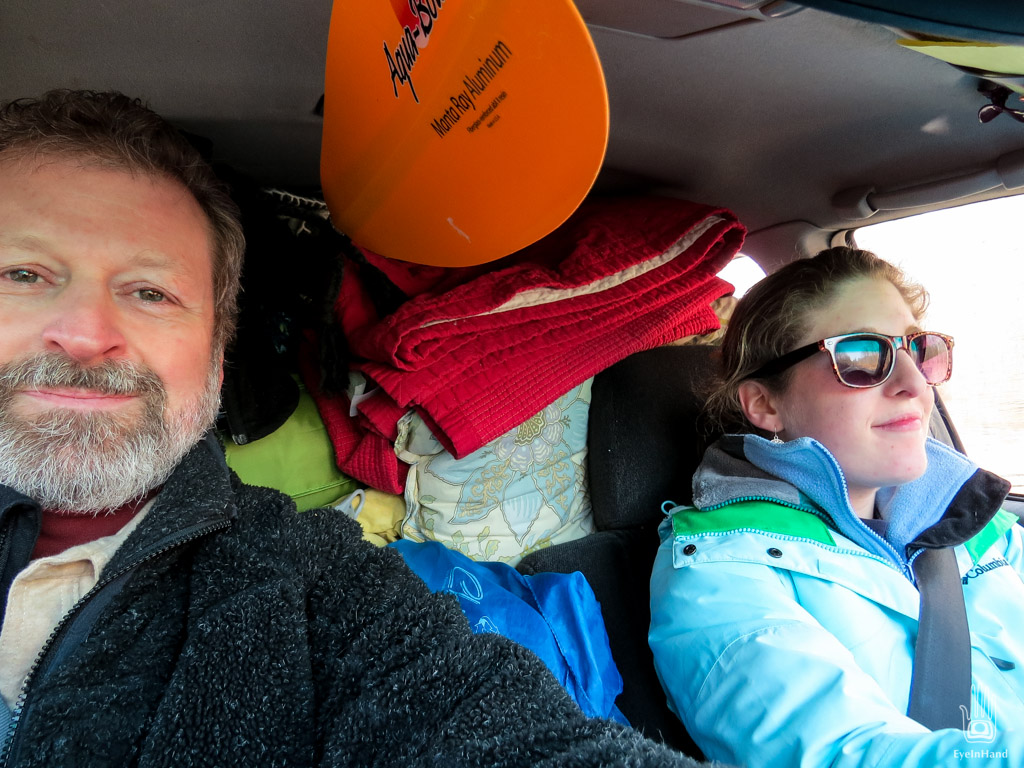 We’re running out of room.

You can only take one small bag.

I’ve got a small carry on. And a backpack. It can sit under my feet.

Cool. My kayak paddle will be by your head.

With the car packed (really packed) idling and pointed west, and we strapped in, the driveway suddenly feels like a runway. We pause a moment to contemplate it. Mentally go through a preflight checklist. Contemplate the leaving part.

The road starts out uphill and twisty. First, wending out of our rural hill country, up the Southwest Mountains and Poe’s Ragged Mountains. Beyond that up the Blue Ridge, across the Appalachian Trail and Skyline Drive, down the Shenandoah Valley, then up into the Alleghenies, which encompass almost the entire state of West Virginia. From there it’s a rolling downhill slide to the belly of the country, and then days of flatlands. 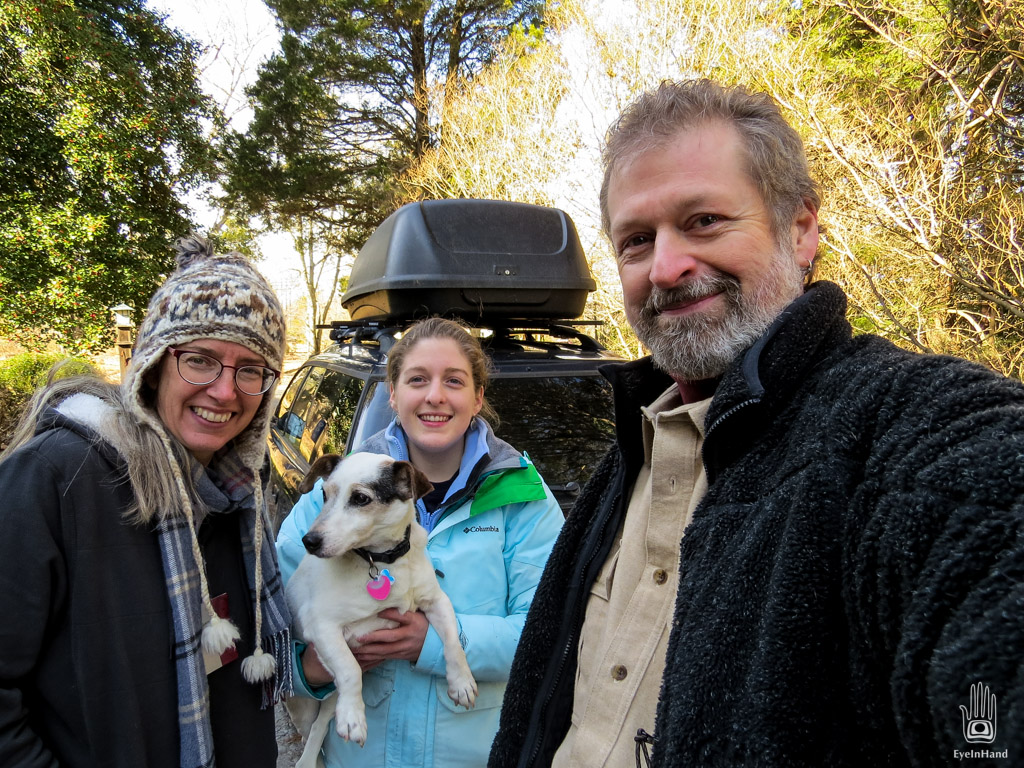 In a pleasing harmonic with history and geography, our Scottsville Road rounds the base of Monticello Mountain. Here, too, Thomas Jefferson dreamed of exploring the West and finding a route to the Pacific. As president, he convinced his friend Meriwether Lewis in 1804 to lead an expedition that would take Lewis from his home, just a few miles from here, across the entire continent, through what Jefferson had acquired in what has to be one of the sweetest land deals in history – the Louisiana Purchase.

The final leg of Lewis & Clark’s journey would take them right past our final destination, as well – down the Columbia River gorge, past Hood River and Portland. Three thousand miles from here, Emily and I will pass the place where they camped along the river. Two Corps of Discovery, two hundred and ten years apart, beginning and ending in the same place. To this day, a pair of elk antlers brought back by the expedition are on display up the hill in Jefferson’s entry hall. I have seen them, and so has Emily. 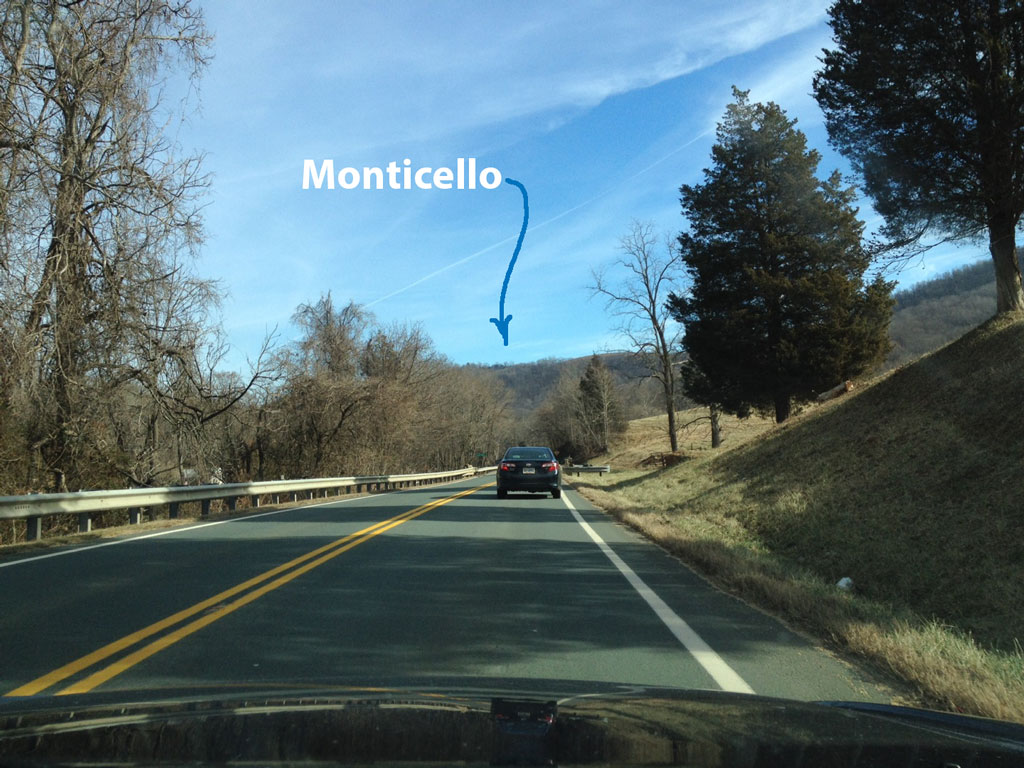 The time-lapse rig is set up before the leaving, and includes an inner tube stuffed with pinto beans, It has been determined this is essential to keeping it steady. The arrangement holds up well for the whole trip. I previewed a bit of the footage at stops along the way. In the first part, the road whips back and forth, up and down, mountains swinging suddenly into view and out again. Farmland. Forests. Then the highway straightens out, takes over and anchors the whole scene, as it will for most of the next 3000 miles. 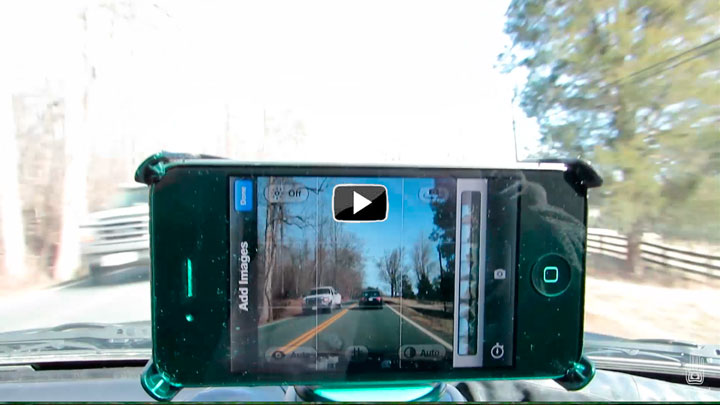 Some regular video, not time lapse, from the first leg.

We’ve lucked into a propitious weather window. The so called Polar Vortex passed just days ago and blew itself out, leaving us blue skies and warmish sunshine. But we see the effects left in its wake the farther west we go. Snow appears as we gain altitude in western Virginia. Not falling snow; at first just hiding on the north side of hills, shaded side roads, buildings. But the higher we go the colder it gets. Eventually, by West Virginia, a scrim of snow covers everything.

One hundred and twenty miles from home, at Clifton Forge, we meet up with the James River again, the same river we left back in Scottsville. We drive alongside for a while, jogging with it up the valley to Covington. There Emily says goodbye to the river she learned to swim in before she could ride a bike, fished in with me from canoes, floated down in tubes with friends in high school, and walked along the banks of with the dogs, some of whom are now gone.

Just 20 miles further and we’re in West Virginia. We come to the Greenbrier River and, soon after, cross the New River. Not only a different state, but a different watershed. All this water now flows not east into the Atlantic, as the James does, but west into the Ohio, from there into the Mississippi, then down through the Midwest to Louisiana and the Gulf of Mexico. More than anything, for river people, this knowledge mentally puts us in a different place altogether, like being in a foreign land. We’re not in Kansas anymore (well, not yet). This is someone else’s water.

I’ve kayaked the New River, and Emily has taken rafting trips on it. It’s a wild river, cutting a beautiful steep gorge all the way through the Alleghenies. Oddly mis-named, th New River is not new at all. Rather, it’s one of the oldest rivers in the world, maybe second only to the Nile. Odd in other ways, it flows northward from the valleys of Virginia up into the mountains, instead of out of them. How is this, you say? The river is older than the mountains, which themselves are some of the oldest on earth. The river steadily, relentlessly, carved its way down through the rock as the mountains heaved themselves up out of the continent, over a billion years ago, wearing through them as fast as they rose.

Beyond Beckley we enter coal country. Soon we see thick coal seams exposed in the cliff faces cut by the highway. Water drains out of cracks in the stratified rock and freezes into dirty cascades.

West Virginia is a bit of a feudal state. Owned by energy corporations, government officials are paid to serve as courtiers, bishops and knights, and the people, willing or not, are left as expendable pawns. Coal here is king, and the king makes the rules. We pass whole mountaintops blown off to get to the coal, the waste and rubble is  bulldozed into river valleys. Most of this is carefully hidden from the highway, but it’s shocking to see when you do. Whether you support it or not, there’s no denying the massive impact it has on the landscape. Terri is following our progress on the satellite map, and texts us that it looks like we’re passing through a bombing range.

At Chelyan we hit the New River again and turn to run downstream. Here renamed the Kanawha, it’s now an industrial river, dammed and locked. The banks on both sides are crowded with coal processing plants, railroads. Open coal heaps are spiked with conveyors and cranes filling barges that ply the Ohio River system. We pass through Charleston, the capitol (population 51,000), get a glimpse of the state of Ohio across that eponymous river, and over the Big Sandy into Kentucky.

Later we learn that, a day behind us, a coal cleaning operation spills over 7000 gallons of a toxic chemical into the river, contaminating the water supply for over 300,000 people across nine counties. The name of the company responsible is “Freedom Industries.”

This gallery includes some of the previous images in context: