It’s 11:32pm when Colorado finally rolls under the wheels, supplanting stubborn Kansas. Except, it’s really 10:32pm, because it’s now Mountain Time. We’ve been up for 17 hours, driving almost non-stop for 15 straight, and still have a long way to go. 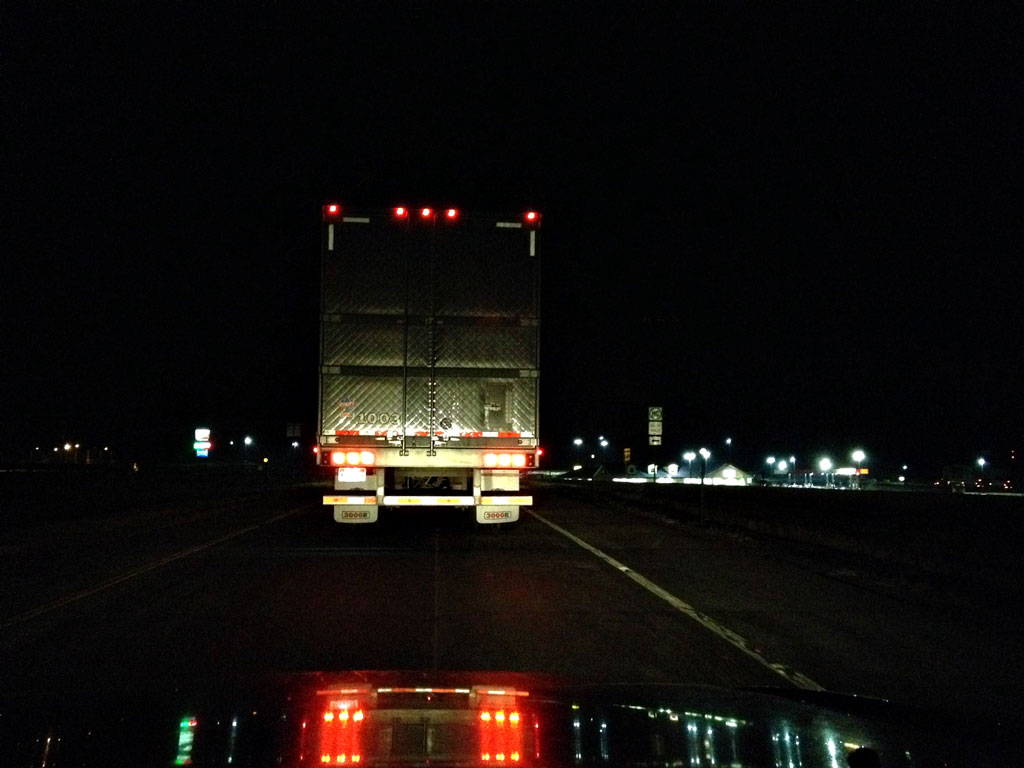 The one regret of this frenetic pace (so far) is getting to Colorado in the dark. I have long heard that, as you drive west, the Front Range of the Rockies rises out of the plateau for a hundred miles. Mile after mile they increase in gravitas, coming closer ever so slowly, no matter how fast you go.

The interstate enters Colorado on a high point in the plateau, the one we’ve been ascending, steadily, since leaving St. Louis. In the dark, across a wide shallow swale between us and the mountains, spread out across the plain, is another huge flock of windmills, this one even larger, much larger, than the last. Red lights flicker out over the horizon, trailing north for 20 miles. All pulse in unison with a synchronized heartbeat. How does one manage to time so many so precisely, and why? 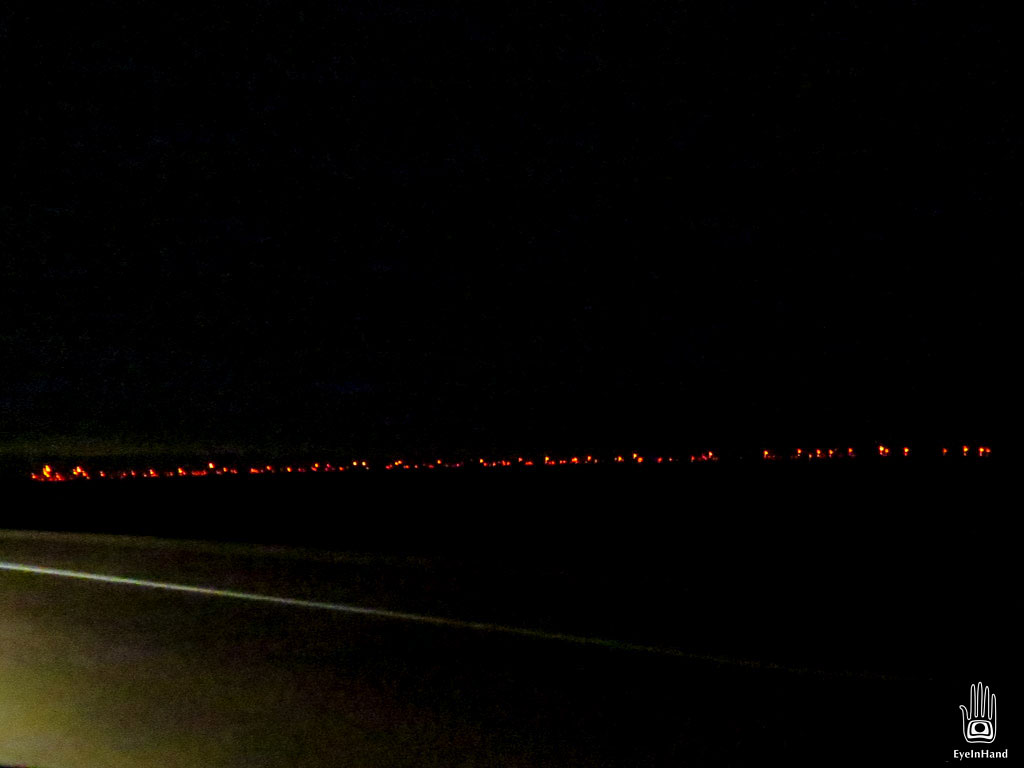 Limon, the last gas stop of the day, is at the southern tip of this windmill field. In the truck stop (scales, wieners, empty restaurant) a young guy behind the counter asks about my camera. Says he takes photos, too, with a pocket camera. Chases storms across the high plains, taking lightning pictures. He has hundreds. No one buys them, he says. 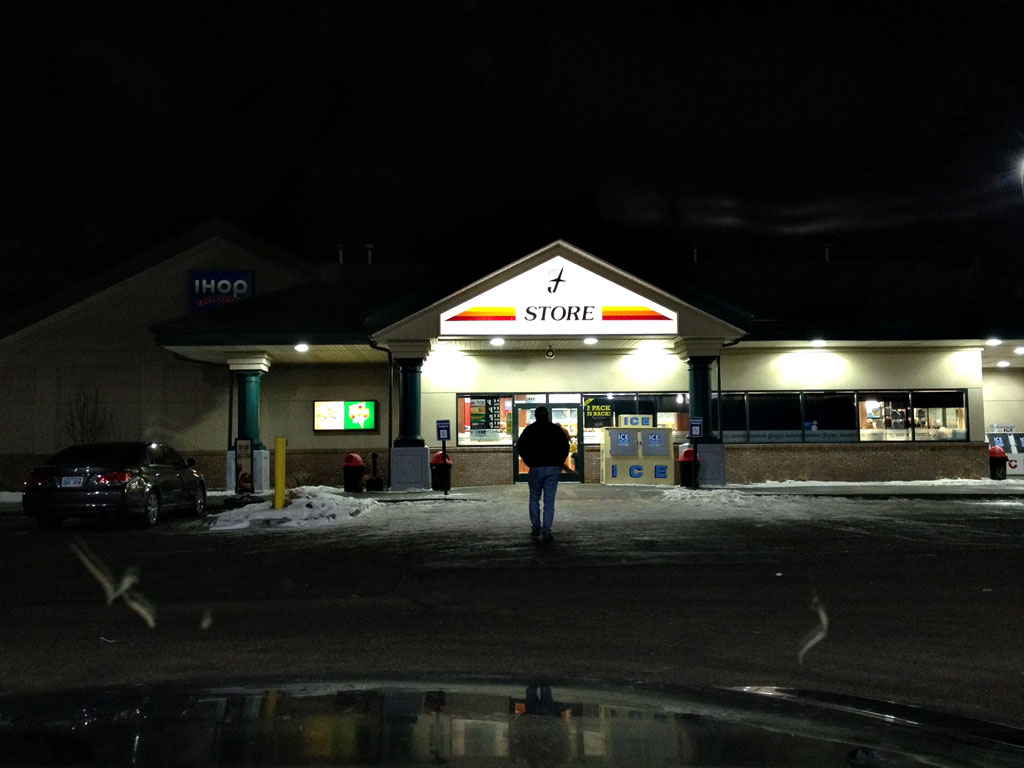 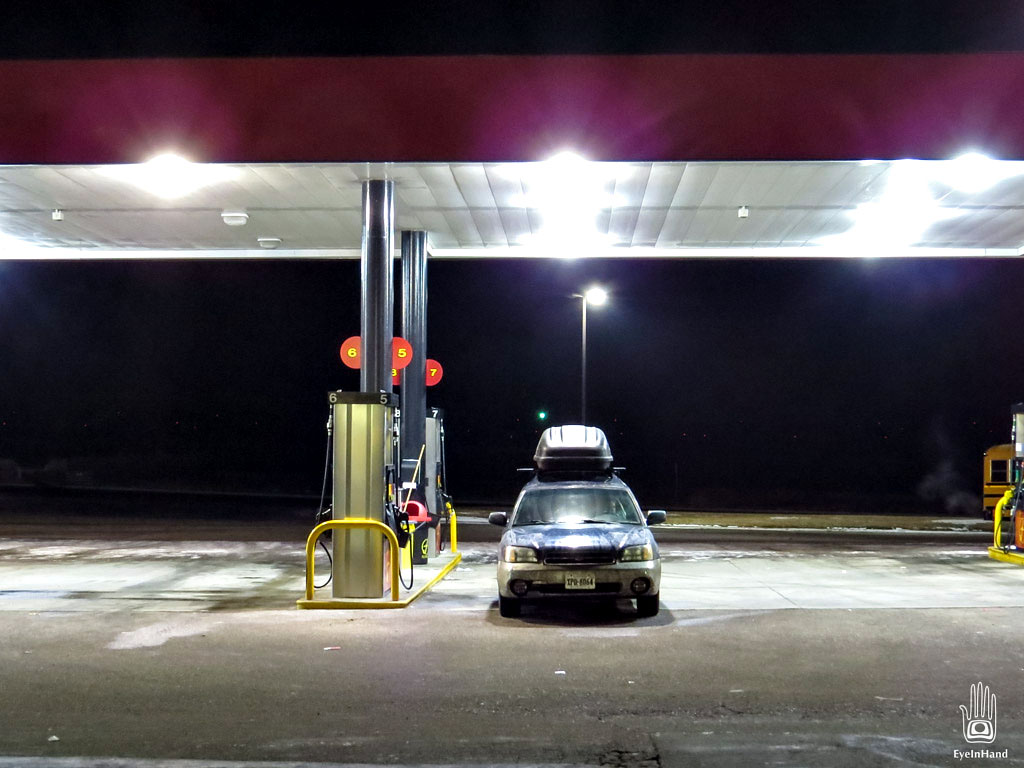 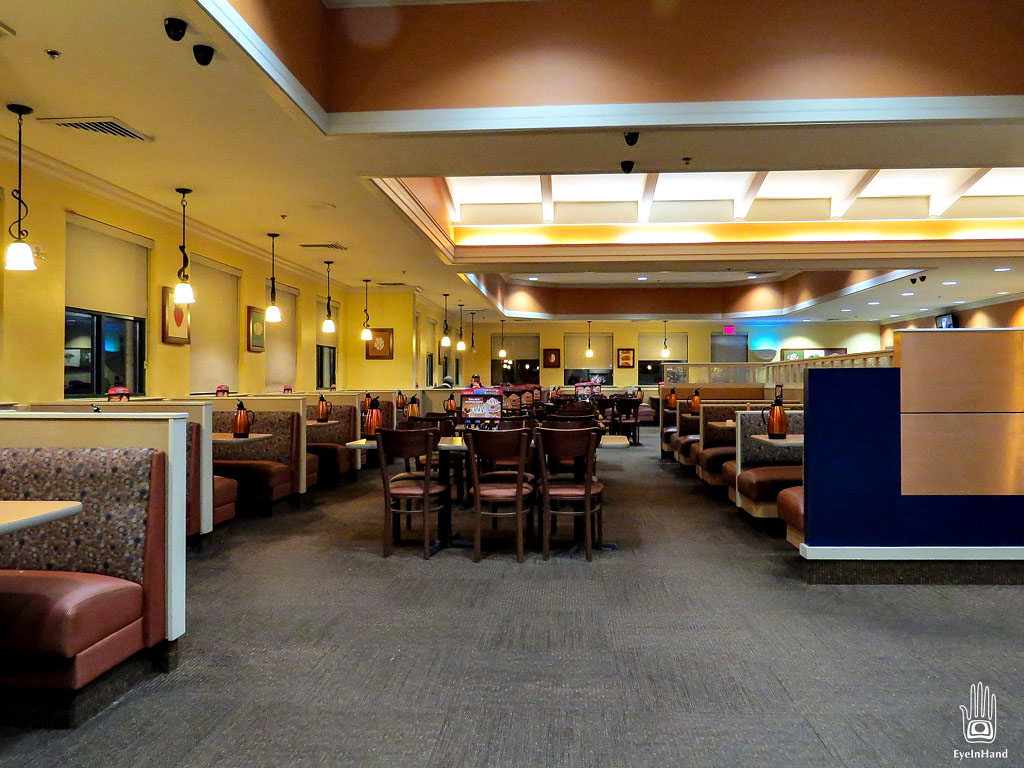 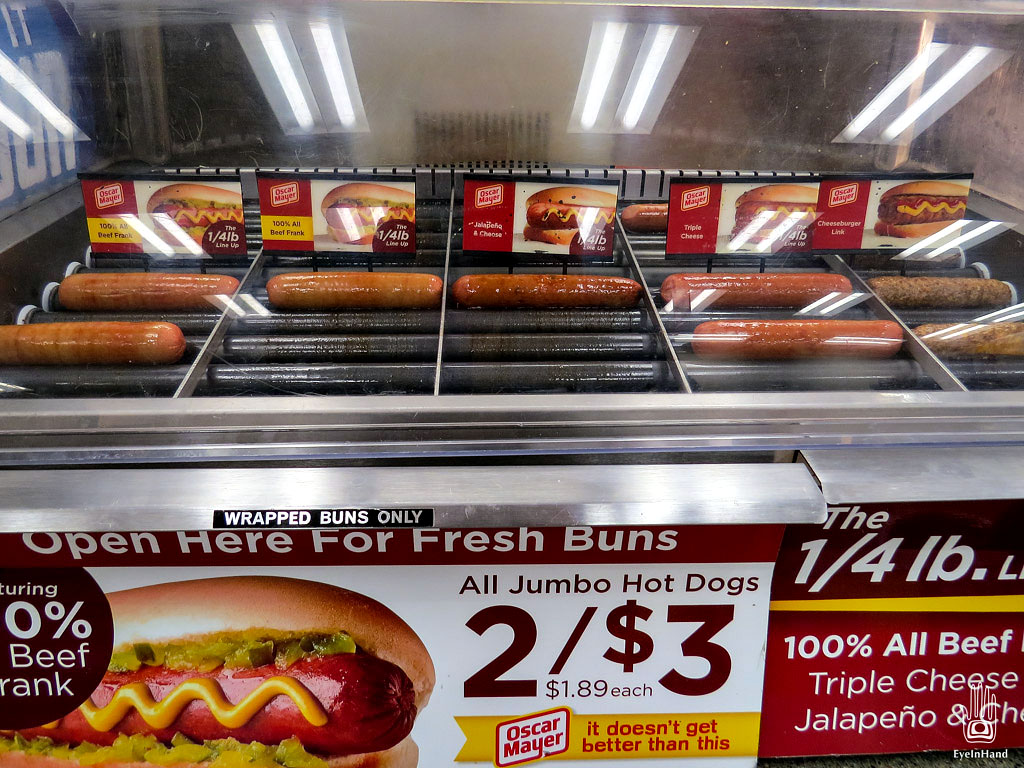 Beyond Limon, past the harsh glare of truck stop lights, it grows very dark again. There’s a glow of Denver in the distance, and an unexpected gift: The stoic silhouette of the Rockies against a starry sky, crowned by Pike’s Peak.

Though we changed drivers only an hour earlier, Emily is so sleepy we need to switch again. So sleepy we don’t wait for the next exit, just pull off on the shoulder. She’s asleep in the passenger seat before I get us back up to speed. 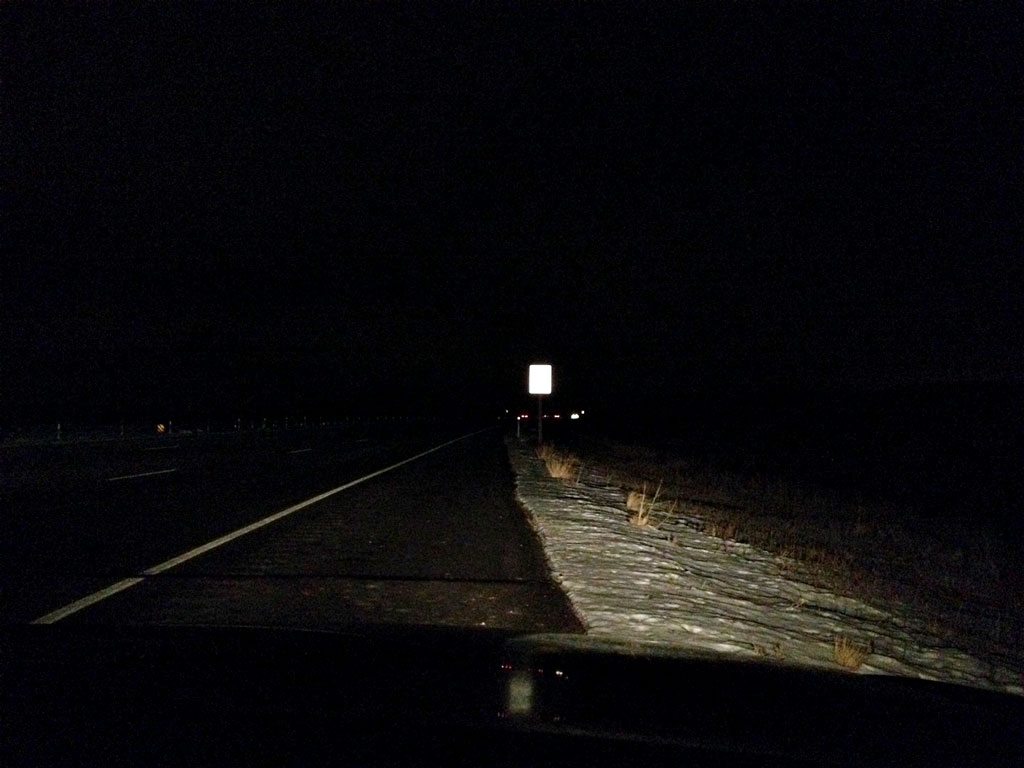 I’m tired, too, and in a moment of indecision drive past the exit for the hotel. Which means, sadly, driving another 10 miles north toward Cheyenne to the first place to turn around, and another 10 miles back. By the time we check in and I get to bed, it’s 3am, 4am Central Time. I’ve been awake for 22 hours. Did I nod off briefly somewhere in Kansas or Missouri? Was that today? I can’t remember.

Thus ends the second day. This is only Day 2.

Breakfast with Mike is in the old part of Fort Collins. He’s been all over the world, but lives and works here, just down the road from where he was born in Cheyenne, a descendant of original pioneers. His great-great grandfather was one of the first settlers, long before Wyoming was a state, or even a territory. The place he picked for us to meet is a cafe restaurant called The Silver Grill, home to the best hash browns I’ve ever had in my life. No joke, these aren’t even in the same food group as what I’ve had before. And, finally, good coffee. 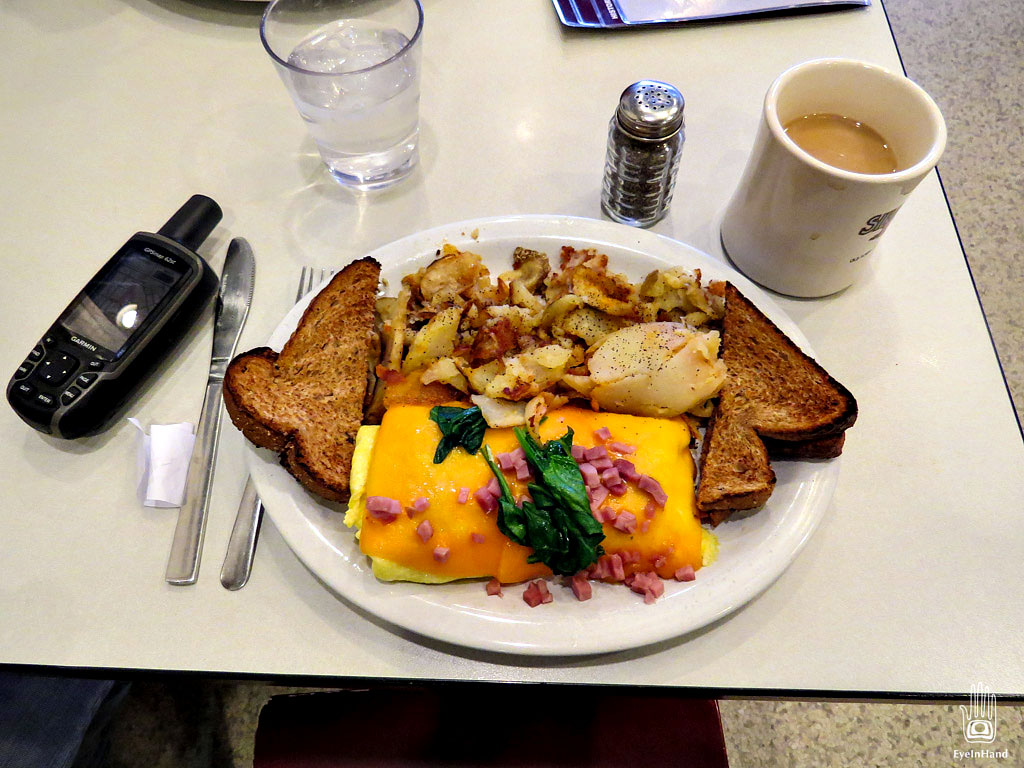 Apparently, it’s also the oldest restaurant in northern Colorado. It was opened over 100 years ago by Charlie Ligget and Chink Brown, who bought the building for $140, and Leonidas “Flossie” Widger. It was originally called the “Uneeda-Lunch Café”, but a hungry sign painter agreed to make a new sign on the window for a pork chop sandwich. He painted the sign with the wrong name, though, calling it The Silver Grill instead. But the sign did look good, so the name stuck, and it’s been The Silver Grill ever since.

As we’re finishing breakfast, Mike asks about our route, and pulls out a big map. Ah, the least interesting route, he says, unless you’re a geologist like he is. He suggests another route. If you haven’t seen Wyoming, this is what you need to see. He points to a two lane road that leads northwest to Jackson Hole, through the Grand Tetons.

Almost as and afterthought, we check the weather on the restaurant’s wifi.

The Tetons is a place I’ve always wanted to see. These are the youngest mountains in the range. They erupt suddenly from the valley floor and rise steeply 7000 feet like a wall, to a peak of nearly 14,000. It will only add one extra hour of driving to the whole trip. The decision is easy.

We can follow at least part of Mike’s suggestion, though, heading northwest out of Fort Collins along two lane highway 287. The shortcut is more scenic, and bypasses 20 miles of interstate.

This is where the trip starts to get really interesting.

The road parallels the mountains, snow covered and golden in the morning light. Red sandstone buttes appear on both sides. Back east, anything softer than granite has weathered away, so the only rocks left are grey. Here you get all sorts of colors. The weather is glorious, the best we’ve had since leaving Virginia. Blue skies, white clouds, clear mountain air. 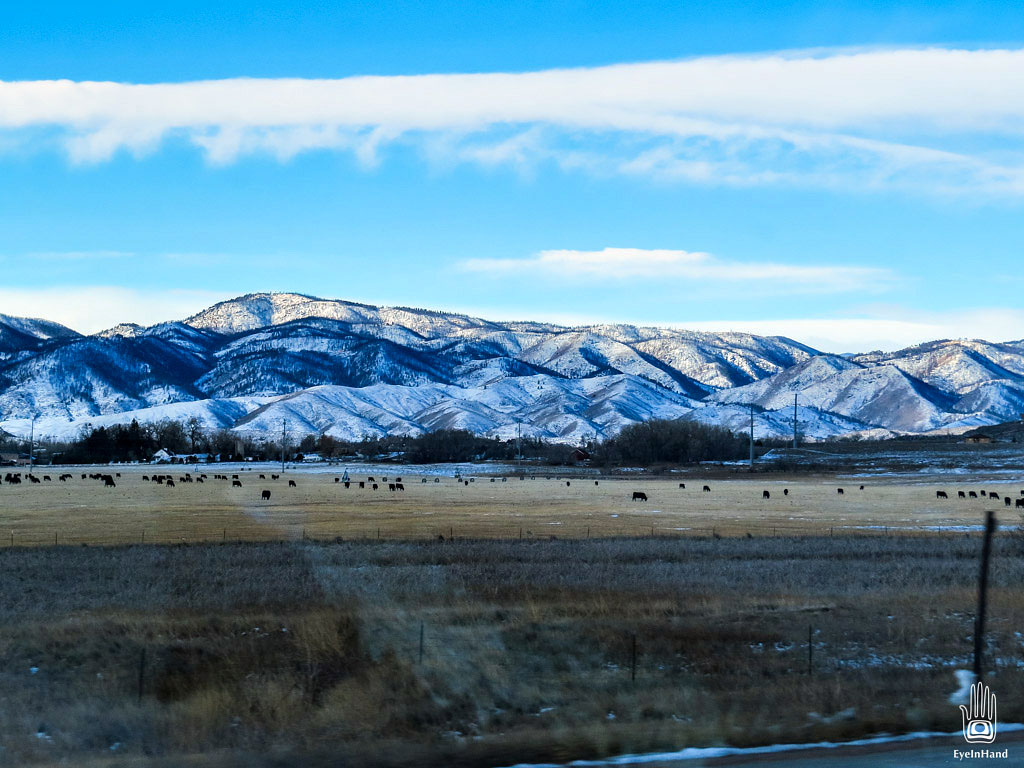 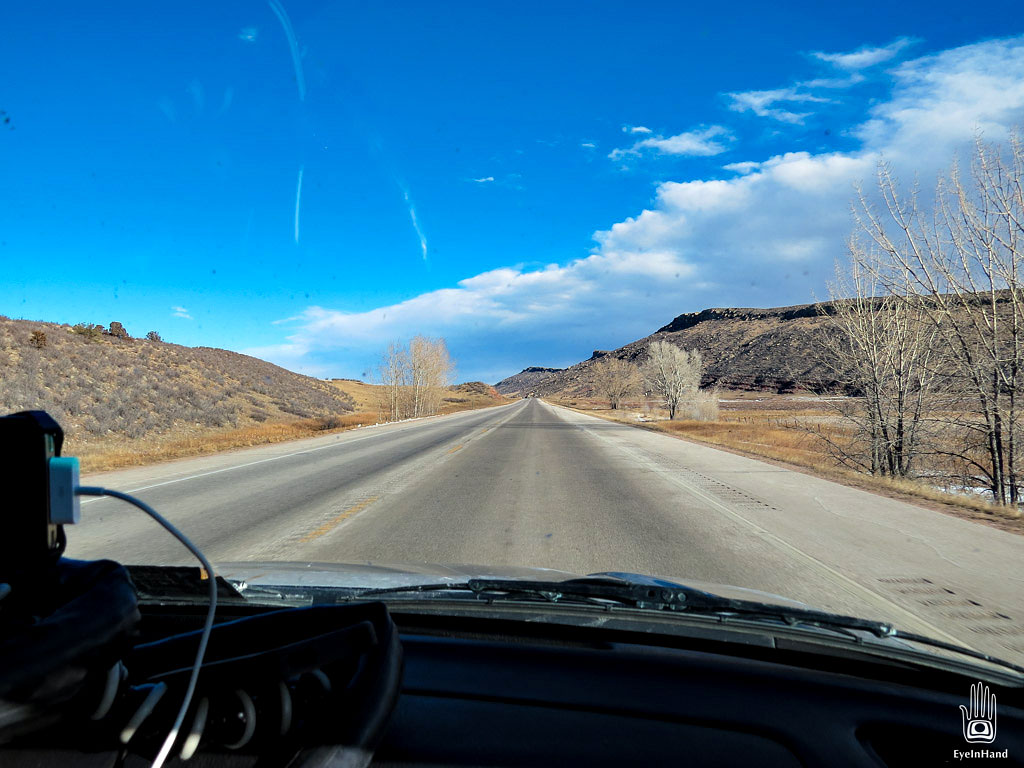 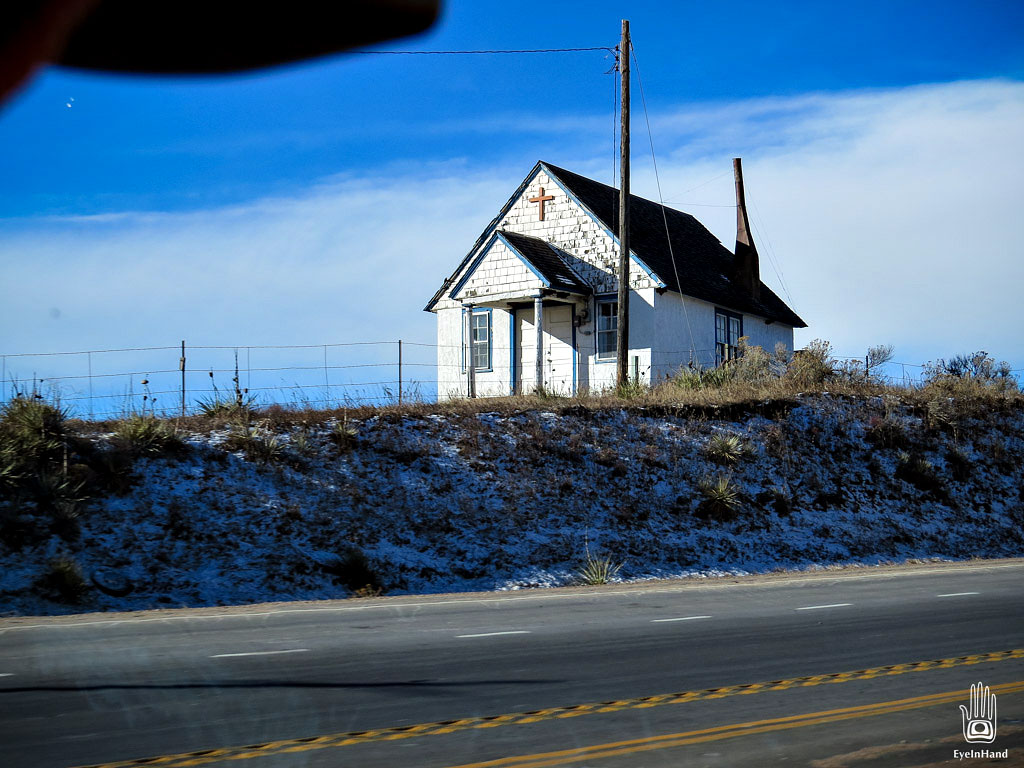 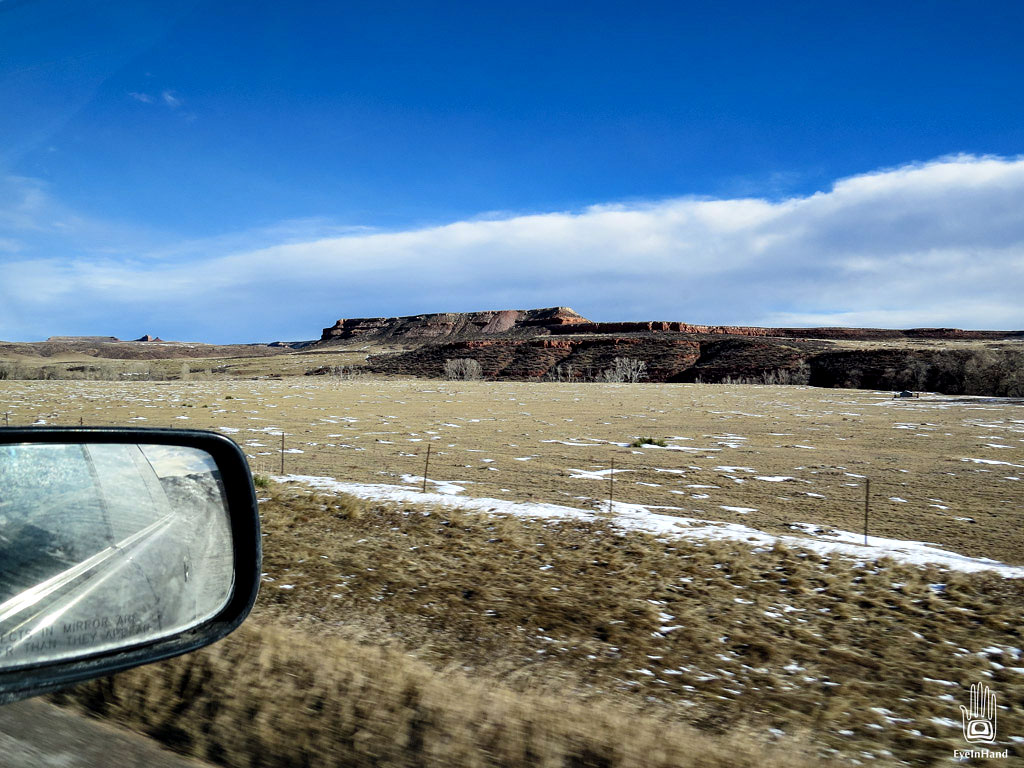 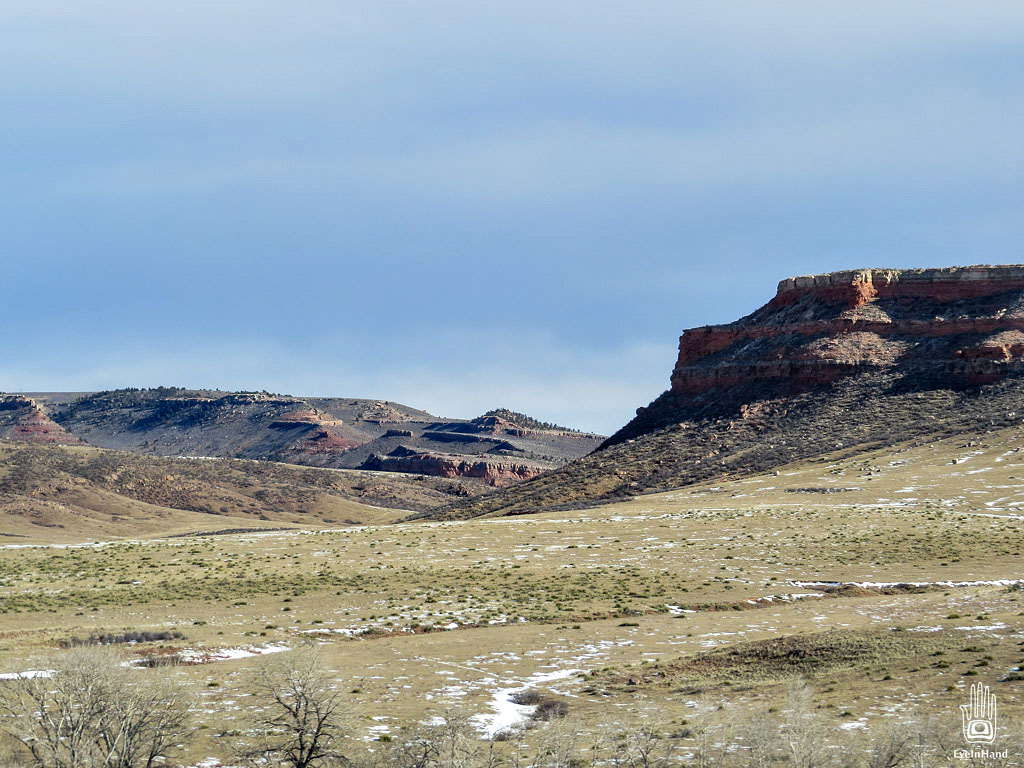 Emily emailed one of these photos to her former boss at the Park Service –
no details, just the photo – said guess where we are? He got within 8 miles.

The road climbs steadily at it goes north, following what must be the trough of the old fault that made the mountains. We pass out of Colorado into Wyoming at a place where the road crests. It feels like we’re approaching something big and prepare the camera for an impressive view, but it disappoints. Flat, dry, dusty, cold, and over quickly. 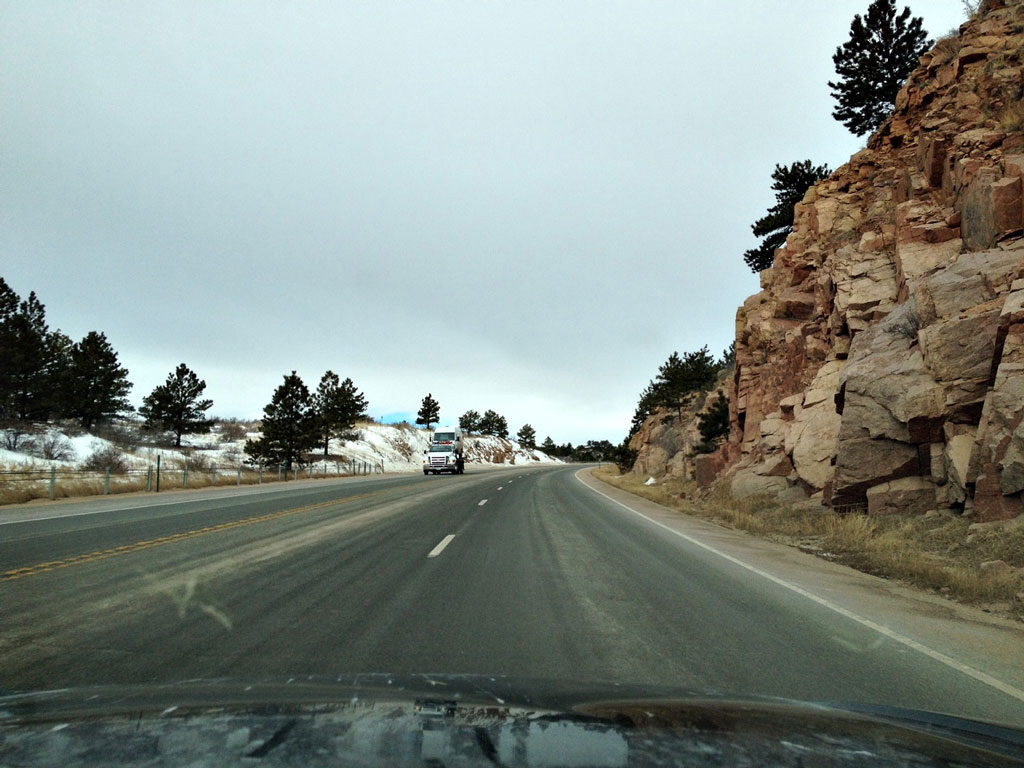 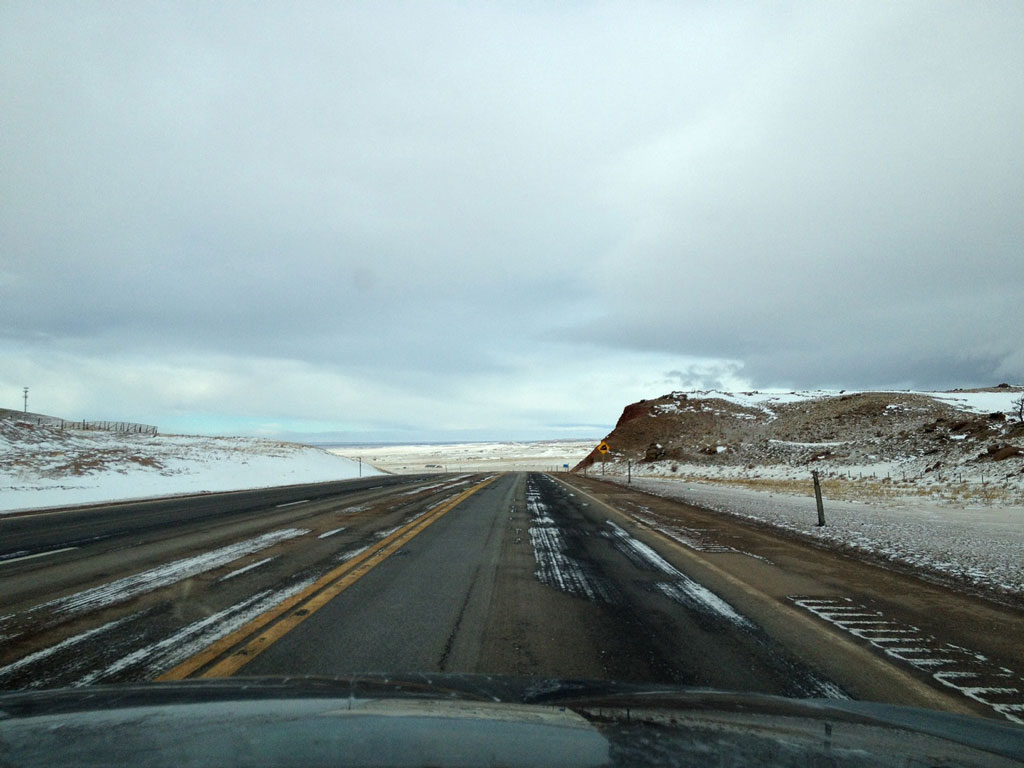 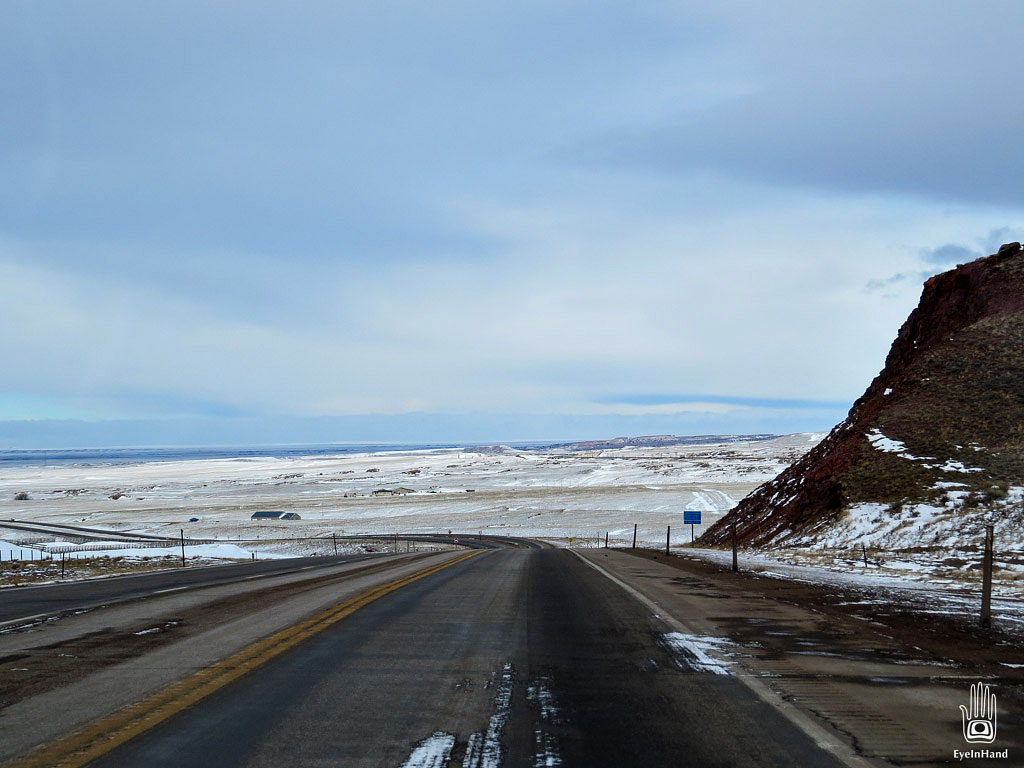 The Highest Point looking into Wyoming

Here, at this rather obscure and unremarkable spot, we learn later, is the highest elevation we’ll reach the entire trip. It’s counter intuitive – we have not yet entered the big mountains to the west where we’ll spend the rest of the day, or crossed the Continental Divide – but at 8000 feet, this little patch in the road is higher than any of the whole 3000 mile trip.

On the other side, the road descends into Wyoming, becoming flat and straight and more and more desolate. There are hints of what’s to come – big strange fences at odd angles and odd locations, disconnected, but clearly with some purpose. Almost like billboards where the ads have blown off and only the framing remains.