Two other times I’ve been to Tangier. Once as a boy of 12, my grandparents took us – me, my brother and sister – on the ferry from Reedville, Virginia, just up the road from where they lived, where I spent summers. Thirty years later, when my own daughters were the same age, I took them over on the same ferry. Ten years later still, on the mailboat from Crisfield, will be the third time. What’s most surprising is not how much has changed in all that time, but how very, very little. 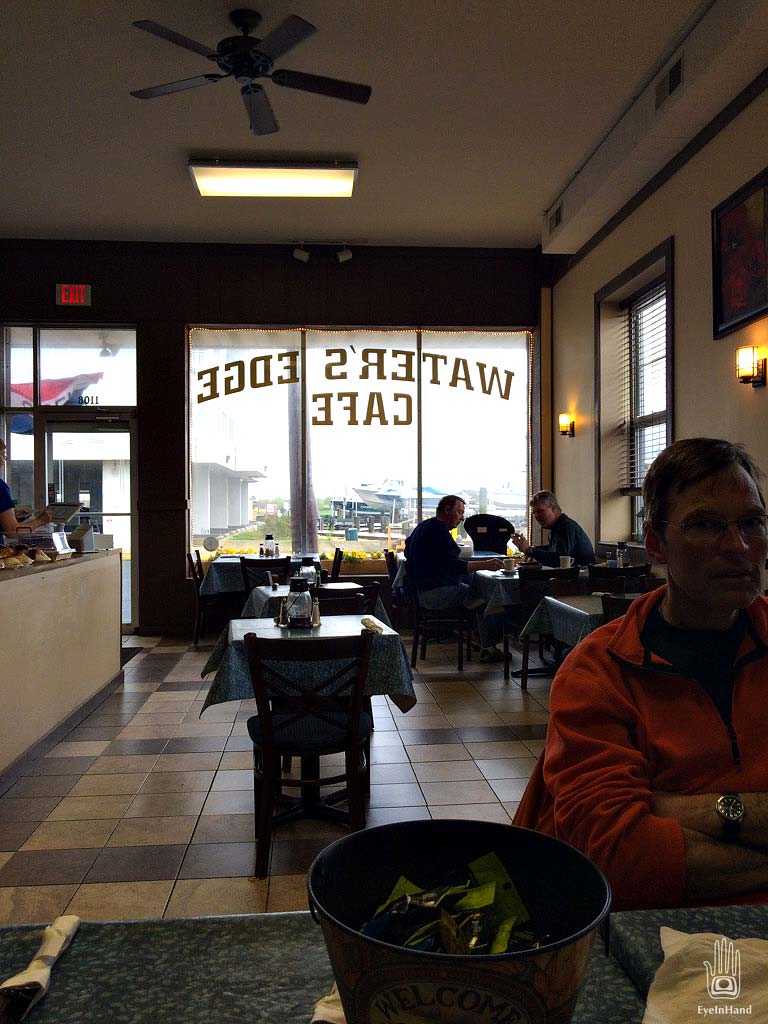 Our group meets for breakfast down by the town dock at the Waterside Cafe. (It’s good hearty food, with omelettes that cover a dinner plate and endless coffee.) From there the we split and parts ways. Some head back to the campsite to sleep and read through the rainy day; others drive south to scout the lower peninsula; five of us wait on the dock to board a boat for Tangier.

The passenger ferry for tourists won’t start for another week. But the daily mailboat used by the locals runs throughout the year, six days a week. Farther down the same dock are three smaller boats; modified deadrise workboats, destined for the three villages of Smith Island, a boat each. All are scheduled to leave at the same time every day, which makes it easy to remember. 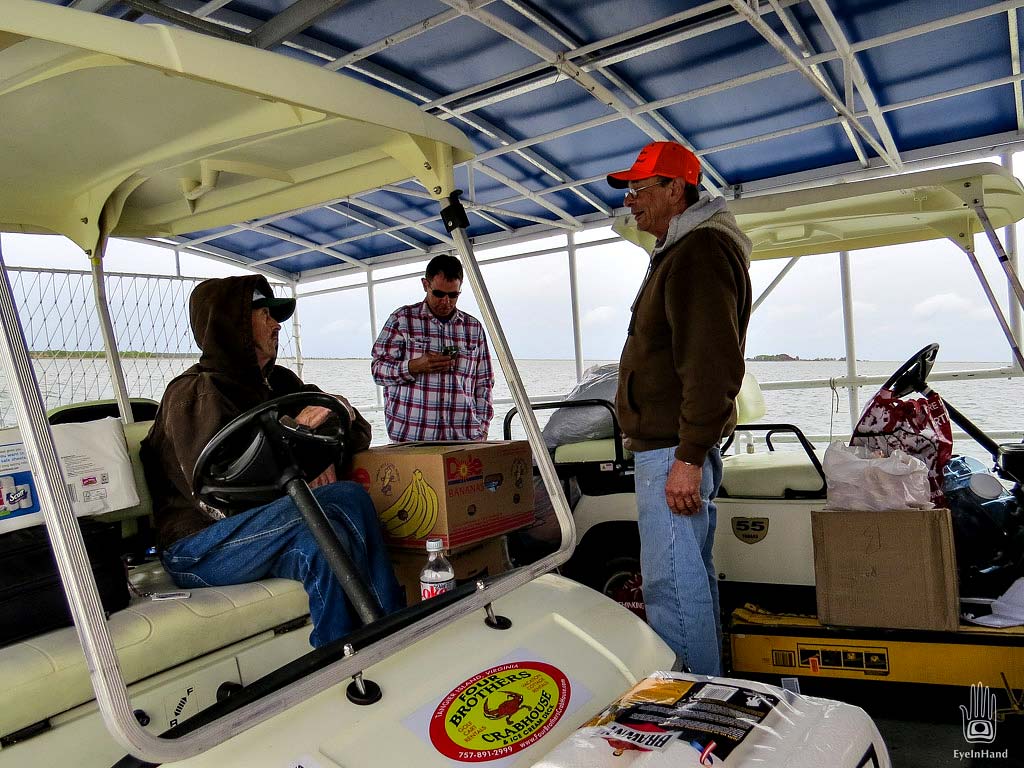 The dock around the mailboat is a flurry of activity. Two golf carts are already onboard, as are big piles of soda. Two young men arrive carrying lumber, say it’s for Bruce Parks, and hand it up where it’s stacked on the cabin roof. Apparently, Bruce Parks, or someone who knows him, will arrive at the appointed time and know which pieces of wood are his. A UPS truck pulls up and the driver tosses packages to the crew up the gangway. A grocery truck backs up and does the same. In between tosses of packages, people old and young waddle up the gangway and disappear below deck, stopping for hugs and quick chats with the deck hands on the way. It’s hard to tell how much of the crew are actual crew and how many are volunteers lending a hand. They all know each other. 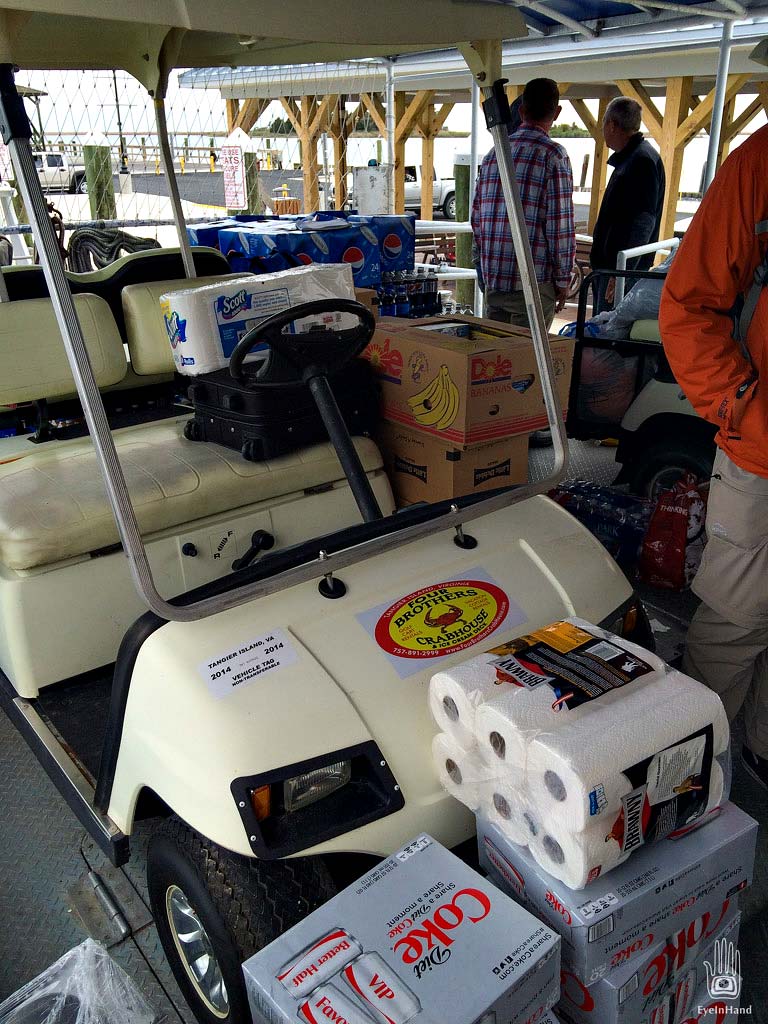 We board as well – $20 cash, no tickets. The deck is packed with all manner of goods. Besides the golf carts and sodas and lumber, there are coffee machines, paper towels, wood working tools, auto batteries, suitcases, laundry detergent, cases of Little Debbie cakes, and banana boxes full of groceries. Nothing is tied down.

Down below in the passenger cabin are rows of big, industrial strength stainless steel seats, maybe 50 of them, covered with heavy padding and strong restraints. They look more like something you’d see on a Soviet era space shuttle than a passenger ferry. This boat obviously makes the crossing in any weather, and is prepared for it. We opt to stay up on deck with the crew. 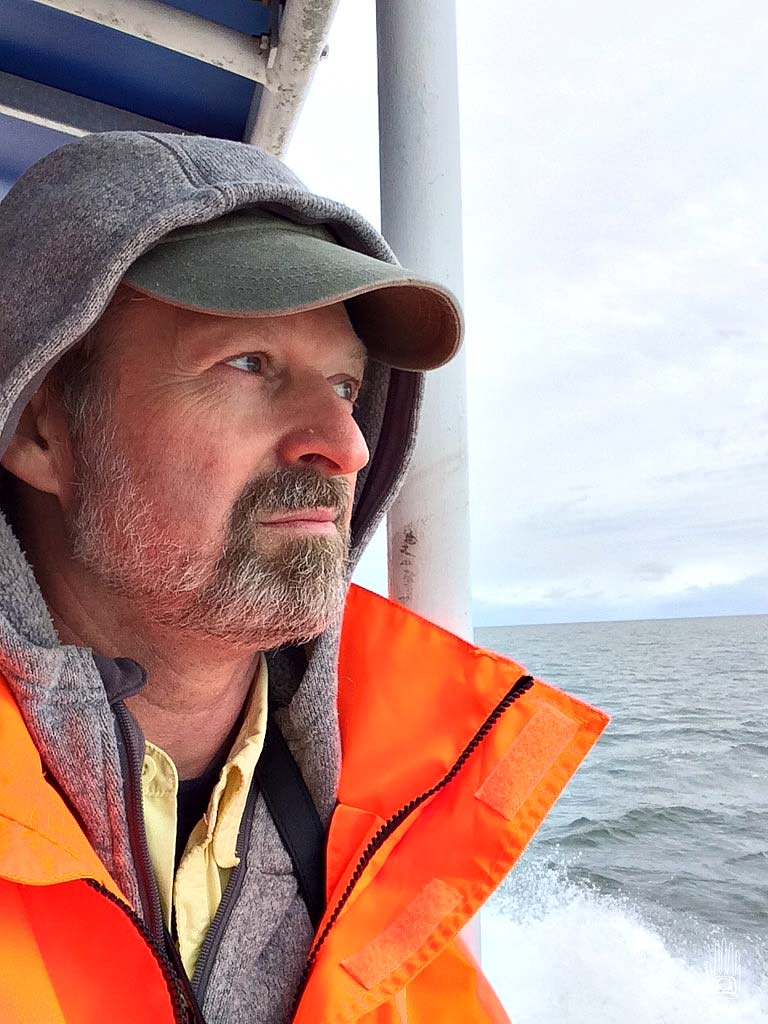 One of the hands says he’s just helping out. A “come-here” – not a native islander – who retired and recently bought a house on the island, now fixing it up. He seems elated, and gives us directions to see the house once we get to the island. He also warns us the ride over this morning was rough. 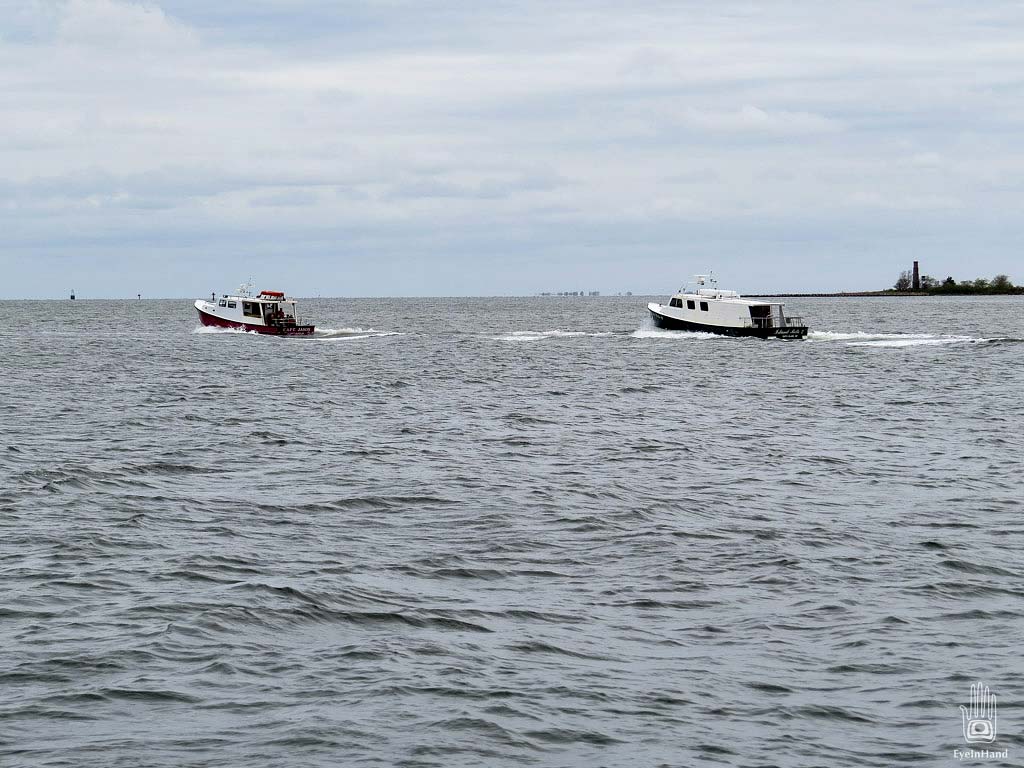 Other boats bound for Smith Island

All four boats cast off at once. Beyond the harbor mouth, the three deadrises veer northwest toward Smith Island. We head southwest into the grey and rain toward Tangier.

Before long the boat is rolling in a following sea. The stacks of soda are tipping and sliding. Crew hurry to throw tarps over the stacks and physically hold them down, though not concerned enough to stop smoking their cigarettes. Everyone smokes. It occurs to me the bottom between Crisfield and Tangier must be littered with gear and goods fallen overboard along this route for hundreds of years. 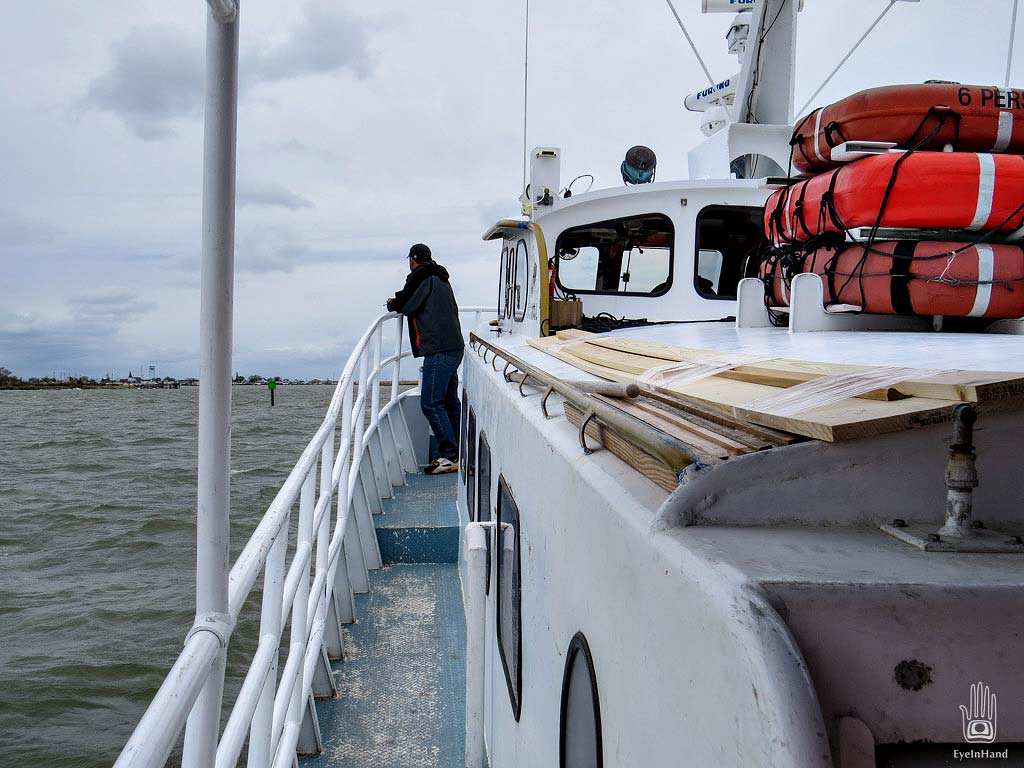 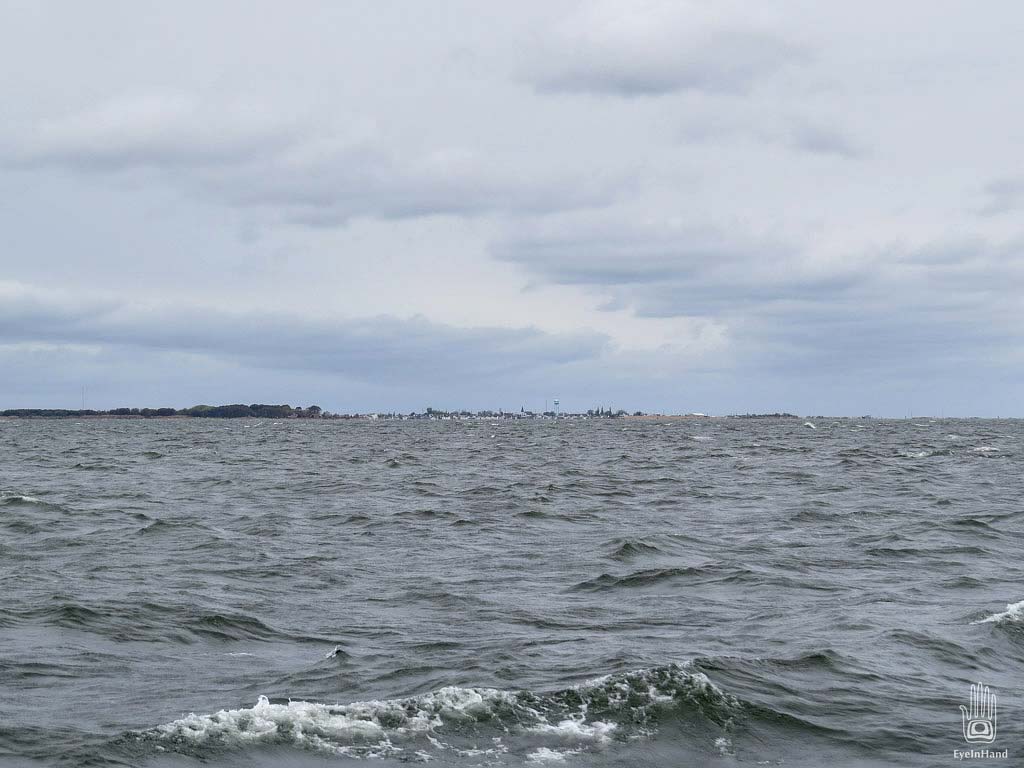 Tangier Island in the distance 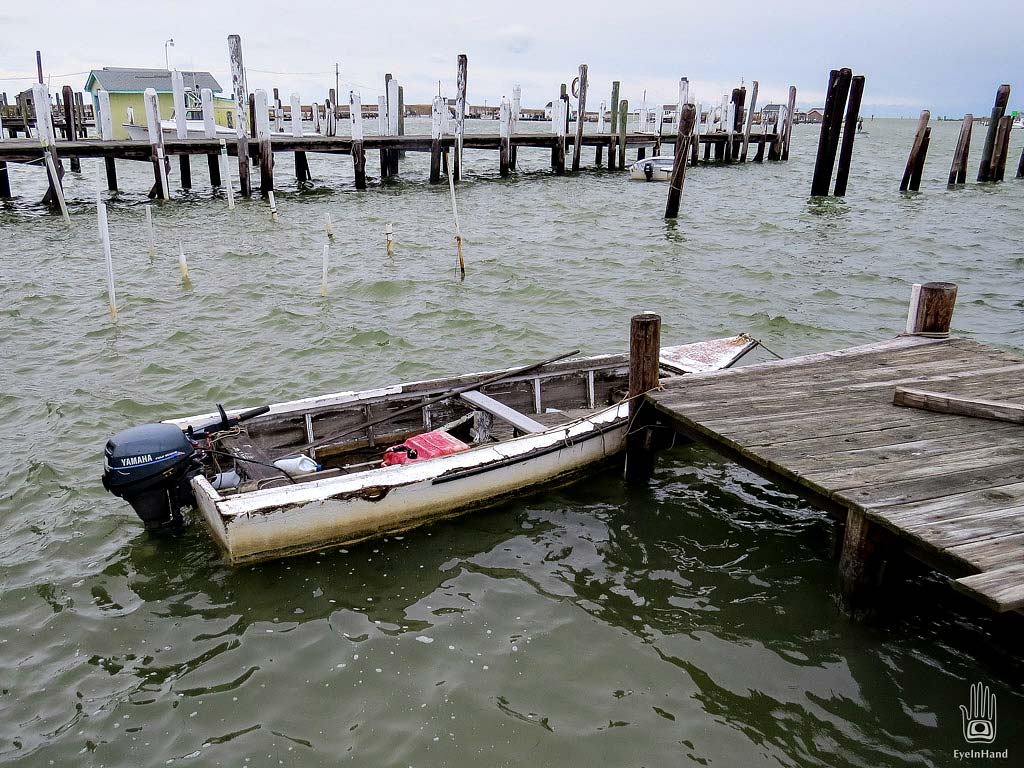 At the entrance to Tangier, we enter a long gauntlet, formed by rows of crab shacks and workboats lining Mailboat Harbor. The boat doesn’t slow down much. The captain comes in hot and backs the engine full at the last possible moment, just nudging the piers between workboats. The day he slips. or the transmission linkage breaks. will not be a pretty one, but today he makes another perfect landing. 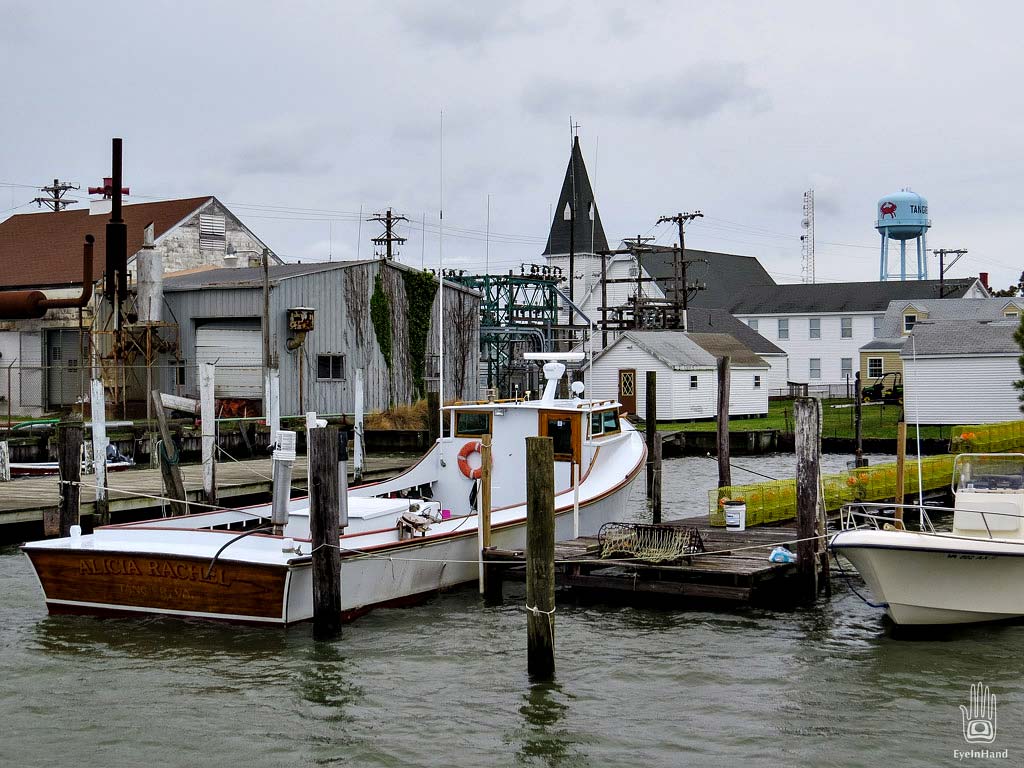 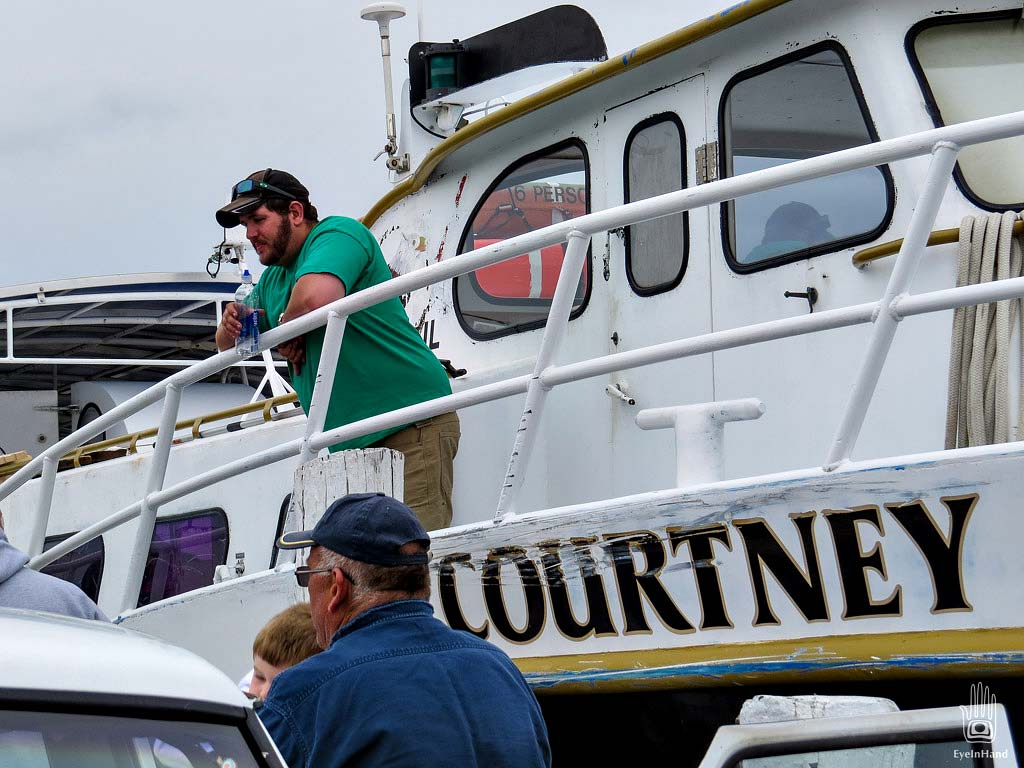 For all the activity leading up to departure from Crisfield, triple that for arrival on Tangier. Even in the wind and rain it’s an event the whole island turns out for. This mailboat is the portal between Tangier and the rest of the world. Through it comes family and friends. long missed, packages ordered from far away – birthday presents, Christmas gifts, tools, toys, party dresses, fishing gear, guns and ammo, engine parts – and basic necessities like food and clothing. A young man walks by carrying a corsage and a new suit in a bag. The area on the dock is like a block party, jammed with golf carts, bicycles and a few pickup trucks. People everywhere laugh and hug and share the news, grandchildren held high and giggling. It’s a happy place. Even people expecting nothing come just for the show. 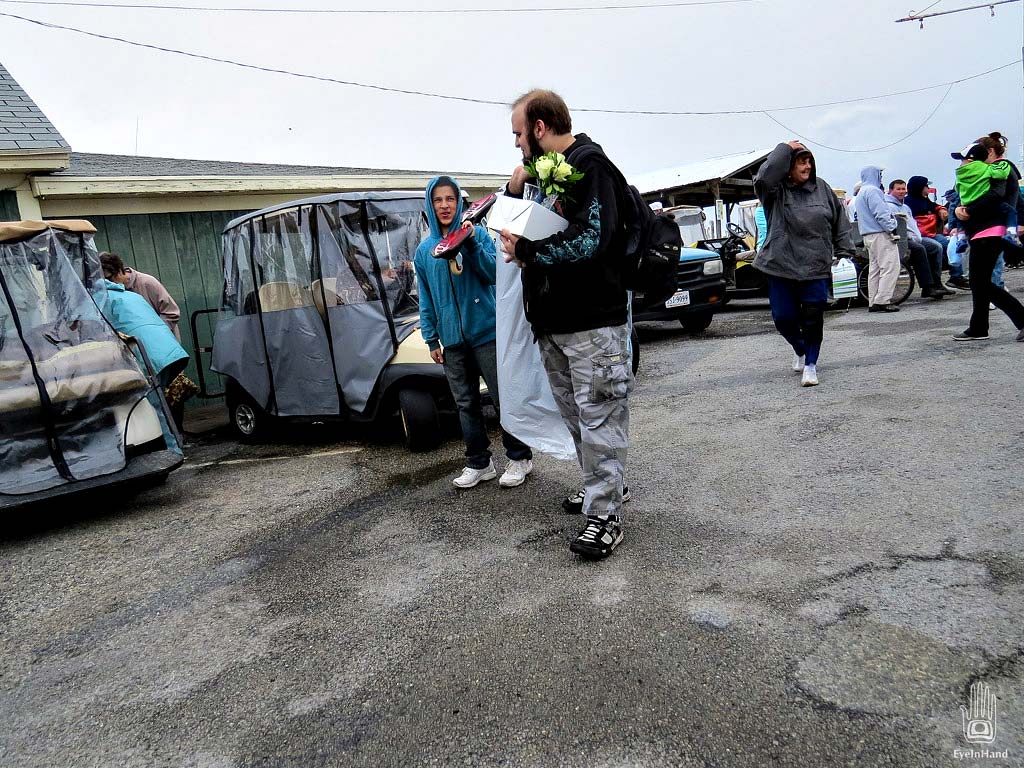 As things wind down we ask around for particulars – a place to eat that’s open, and when and where (and if) there’s a boat back to the mainland later in the day. Only one place to eat open until the weekend, we’re told, and only one boat back, so don’t miss it.