The island has no official name. It has not been an island long enough to get one. Perhaps a budget office calculates it isn’t worth updating maps and charts, that it may not be an island for long. Even for locals it has no name. They simply refer to it as “the island.”

Not quite here, not quite not.

While most islands in the Chesapeake are disappearing – Smith, Tangier, and Hoopers; others like Holland already gone – new islands do appear, created by the same forces. That’s how this island came to be, about 40 years ago.

Mathews County is low and marshy, prone to tidal flooding and storms. The flat profile makes for land  laced with tidal creeks and wetlands, which means lots of access to and intimacy with that water. Only 4 miles of the county actually border land, the rest is bound by water. With an area of only 86 square miles, Mathews County has 360 miles of shoreline.

Other places around the Bay have similar statistics, but Mathews, a remote rural area not on the way to anywhere, has been a center of boat building and boat handling on the Chesapeake for hundreds of years. From the turn of the century until well past WWII, steamship lines in New York would only hire men from Mathews County to captain their ships. This was corporate policy. Though I heard it from watermen friends of my grandfather, it was confirmed in a great book I read recently, The Mathews Men, by William Geroux.

Watermen from Mathews dominated the Merchant Marine during WWII. The Hudgins family, plentiful in Mathews, was one example: On a single afternoon, three separate ships sailed out of Baltimore Harbor captained by a Hudgins. Brothers and cousins often served as officers and crew on the same ship. Many had ships sunk out from under them by German U-boats, not once, but several times.

Genious Hudgins survived one sinking, torpedoed by a U-boat and set adrift in a life boat. After only a week ashore, he signed onto another ship with fellow Mathews men, again went to sea, and died when that ship, too, was torpedoed. Many of those men are buried in a graveyard north of here on Gwynn’s Island.

The only house on what is now this island was built by an earlier Hudgins.

Born and raised around Winter Harbor, Alfred Hudgins had a business in the early 1900s fumigating Navy ships in Brooklyn, NY. He became close friends with the Parkers, a married couple who worked for the Navy as pharmacists. Speaking fondly of home, he convinced the Parkers to retire with him to a two mile finger of unclaimed land back in Virginia.

Back then this place was not an island, but a peninsula. It extended three miles along the Bay from the north shore, separating the Bay from Winter Harbor. A deep inlet at the southern tip gave access to the marshes and protected water inside. They homesteaded the property, obtained a deed for it, and built a small eight bedroom hotel where they all lived, intending to serve the steamship trade going up and down the Chesapeake. 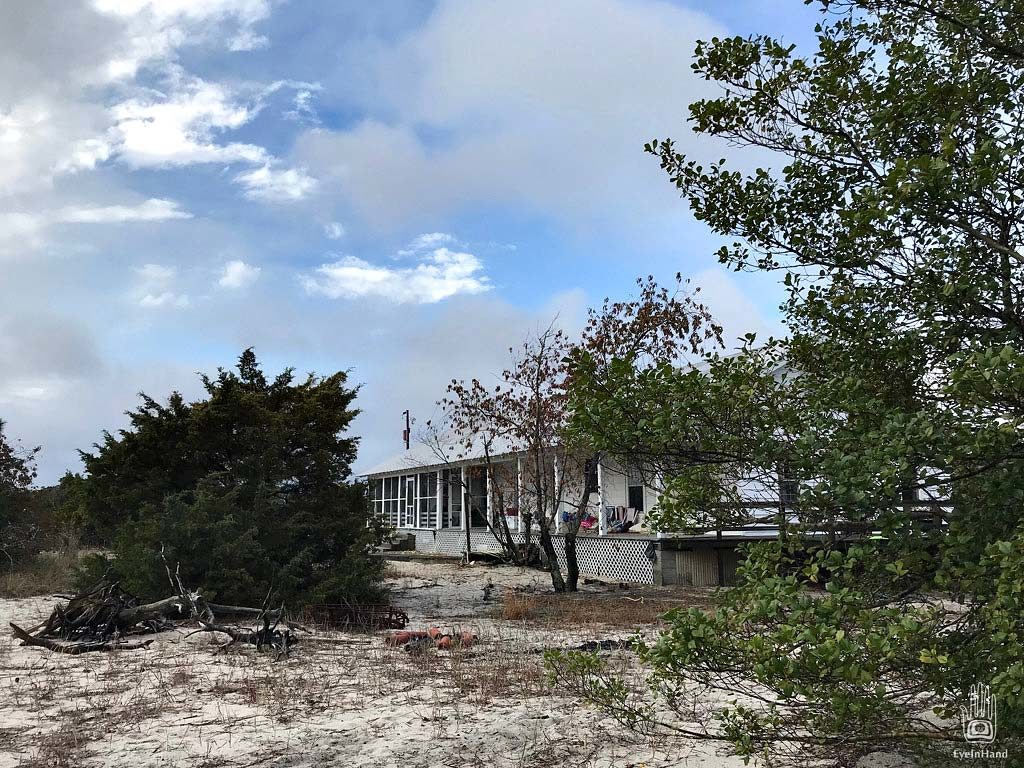 In less than a decade, the Parkers had died. Hudgins moved away, and the property passed to relatives.

The little hotel continued on, sometimes as a hunting lodge or a private home, until an historic nor’easter, known as The Great Blizzard of 1978, cut through the peninsula at the north end. This turned what was once a peninsula into the  island it is today.

I remember that storm. I was a freshman in college. My grandparents lived on the Bay at Windmill Point, just a few miles north of here. The previous winter was a deep freeze so cold, the ice so thick, that people walked across the Bay at Annapolis. Smith Islanders were cut off from the rest of the world for a full nine weeks. It had not been that cold since 1918. Old timers said back then the Bay often froze over so solid that wagon teams drove across the five mile wide Rappahannock in front of my grandparents house, but it had not been that cold since.

The following winter brought more severe cold, along with hurricane force winds and record snowfall. The snow was so deep that drifts along the road to their house were higher than my car. Thick ice, driven by high wind, destroyed my grandfather’s pier, and nearly did the same to the Sharps Island Lighthouse off Tilghman Island. It still lists from the battering it got in those two harsh winters.

Cut off from the mainland, doing anything with the little hotel became more problematic. It was always accessible by boat, but its future became more tenuous. Maintenance was hard enough before; now major work seemed out of the question. The plumbing is wonky. The water is drinkable, but salty and sulfurous. A huge meteorite struck at Cape Charles millions of years ago, shattering the aquifer. You’re actually drinking the ocean of the Eocene period. If you aren’t used to it you’ll want to bring your own.

Left alone, the house became a sort of time capsule of the late 1900s. Furnishings from a previous era. The bedroom doors are still numbered 1 through 8. Wesley says he fears the island’s days are numbered, too. Every storm takes more of it away.

We found four USGS Survey Markers scattered around the island. One is embedded in the top step of the front porch, bayside. Others in the dunes to the north and south. One stands three feet tall, the ground around it swept away by wind and overwash. Another, almost as tall.

Ironically, relentless transformation is what keeps the island so well preserved. That, and economics. It remains as it was, isolated and unchanged.

2 Replies to “Winter Harbor ~ The Island that Isn’t”