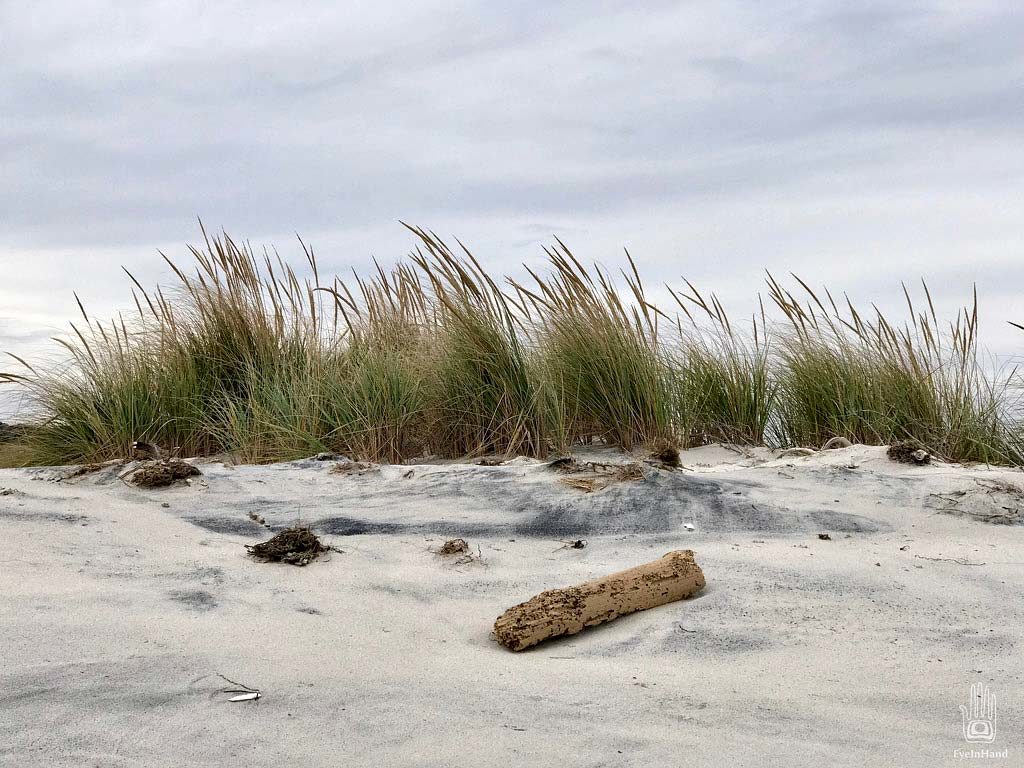 It’s early, and T is sleeping in for the first time in months. After coffee, I leave by the screen door, wade fifty steps through soft sand to the Bay and turn left.

There is only one house on the island. There is no one else here.

The island is two miles long, most of that north of the house. But it is very, very narrow. For most of its length, so narrow you can stand in the marsh and throw a stone across to hit the Bay. More than a sandbar, but to call it a barrier island perhaps exaggerates. There are trees, many of them quite old, but dunes throughout are flattened by overwash from Bay to marsh. It’s clear that water often flows through the trees. No barrier; more like a split rail fence.

The place is raw and wild. Animal tracks everywhere – birds of all kinds, but also otter, fox, raccoon and muskrat. And terrapins. With no one to disturb them, the tracks persist between rains. We find many skeletons. Like the undisturbed tracks, bones remain in place, composed where each creature took a last step. 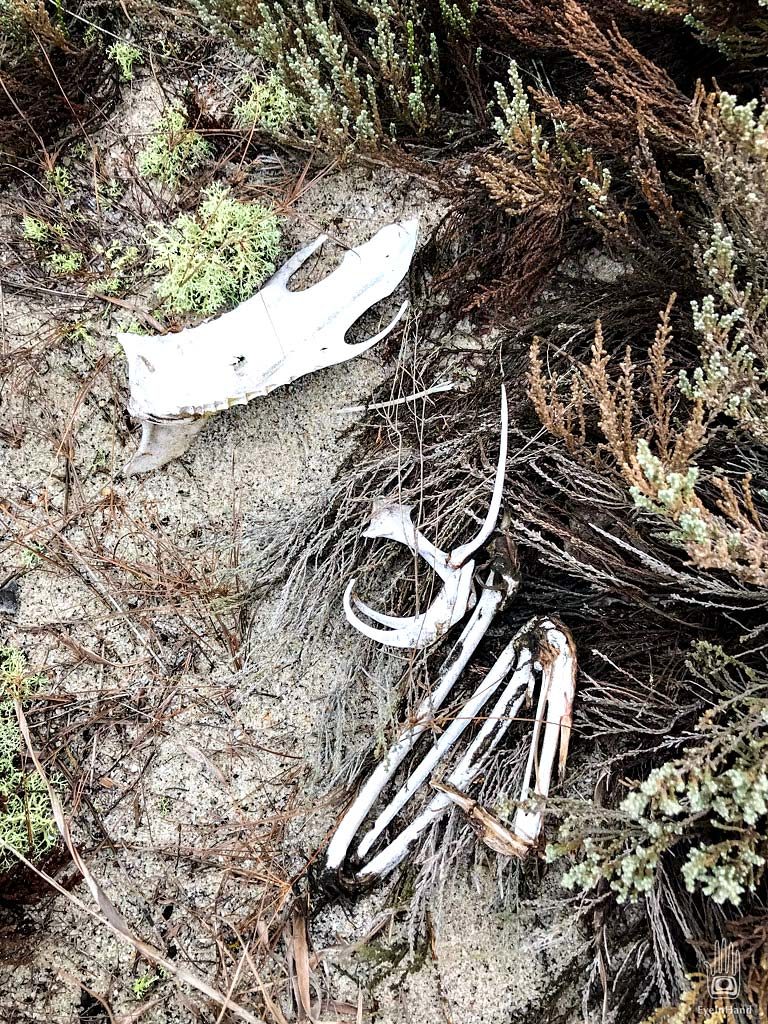 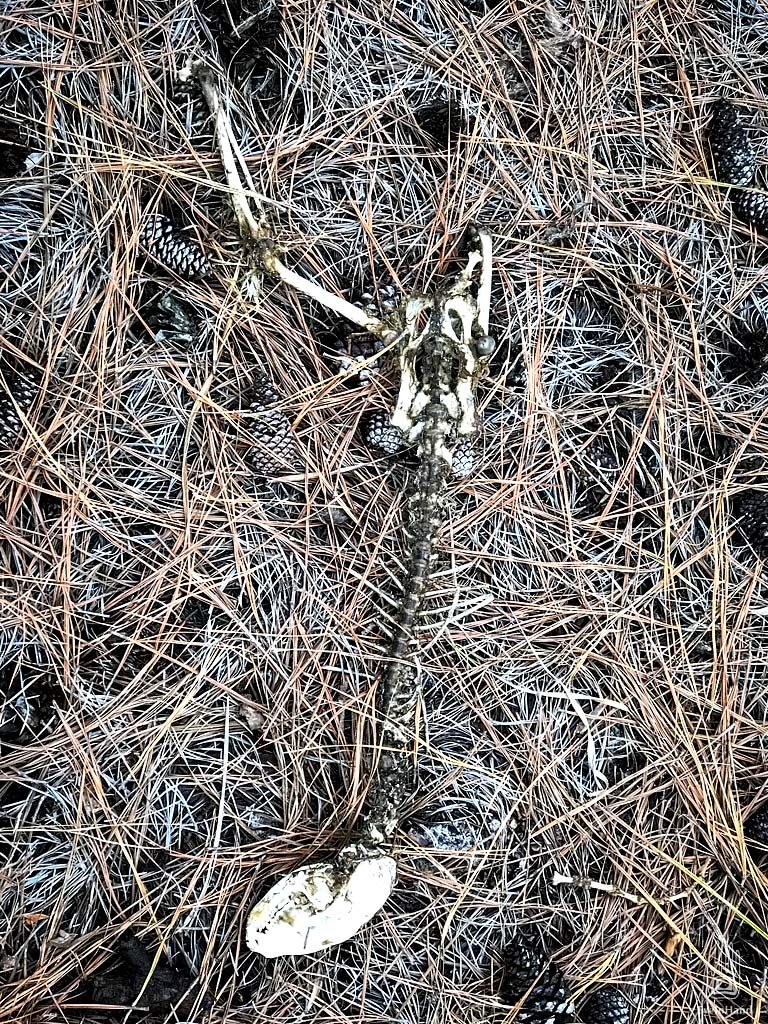 A soft spongy lichen grows thick in the sand pans, or rather on them – they have no roots at all, a footstep dislodges them. Also odd mushrooms that burst into blackened blossoms.

Trees fall slowly into the Bay, making a tangled boneyard on the beach. To get around, I have to climb the undercut dunes into the last remaining stand of maritime forest. 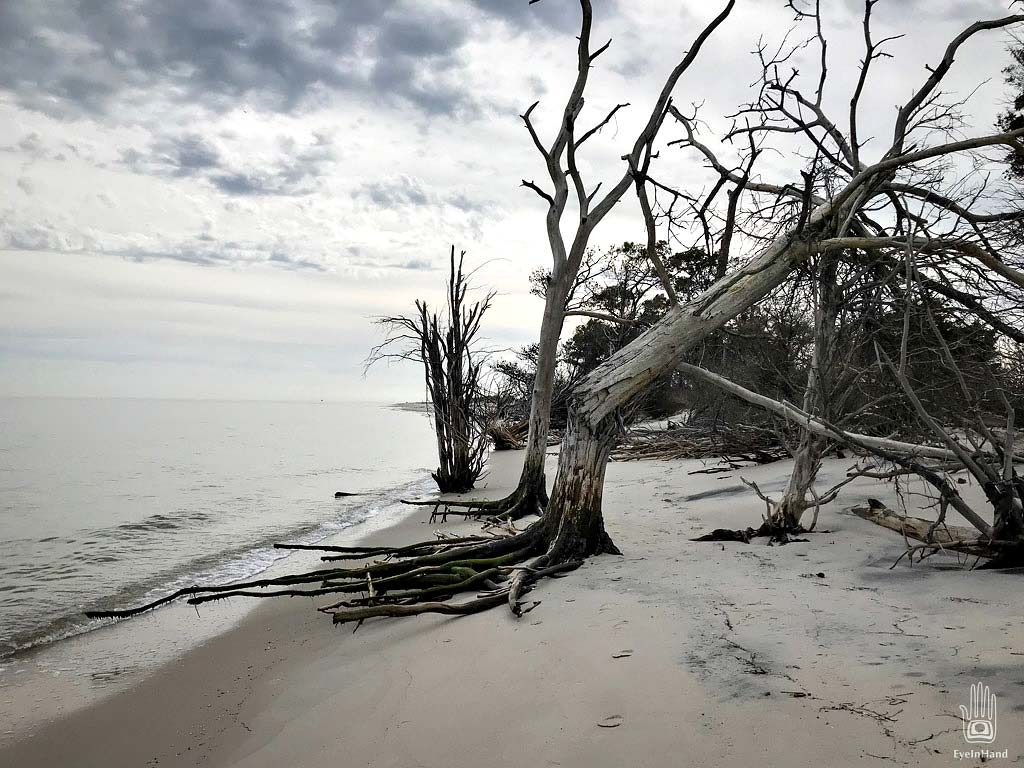 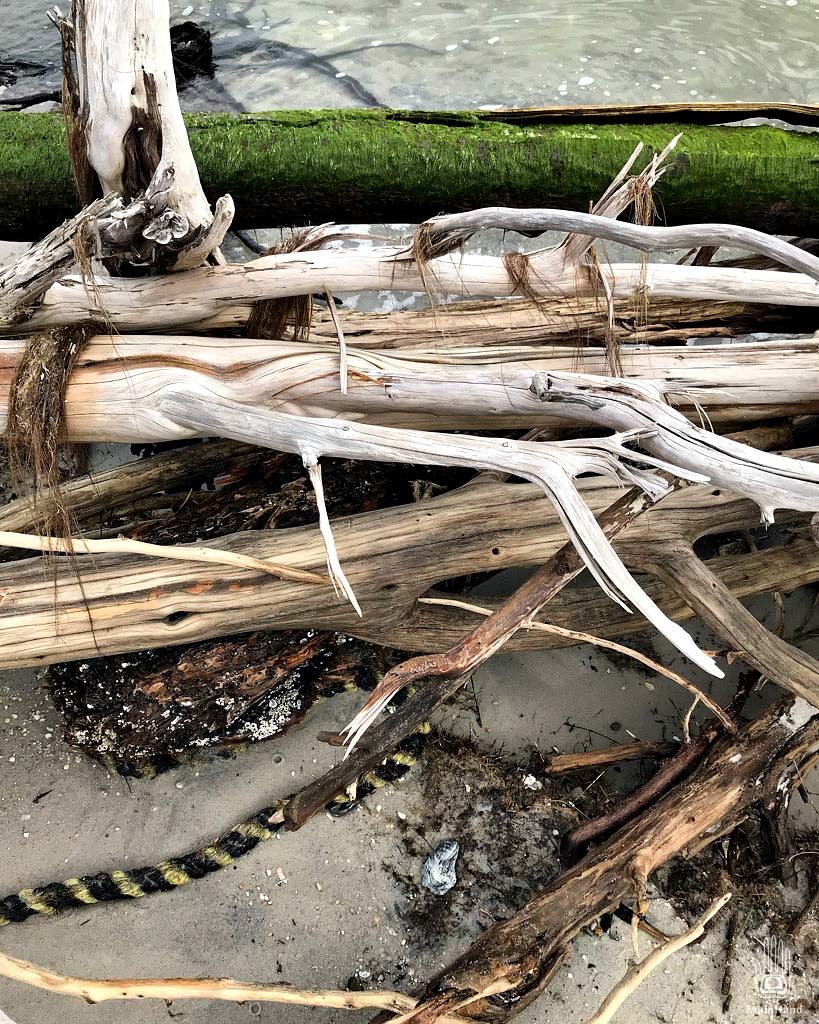 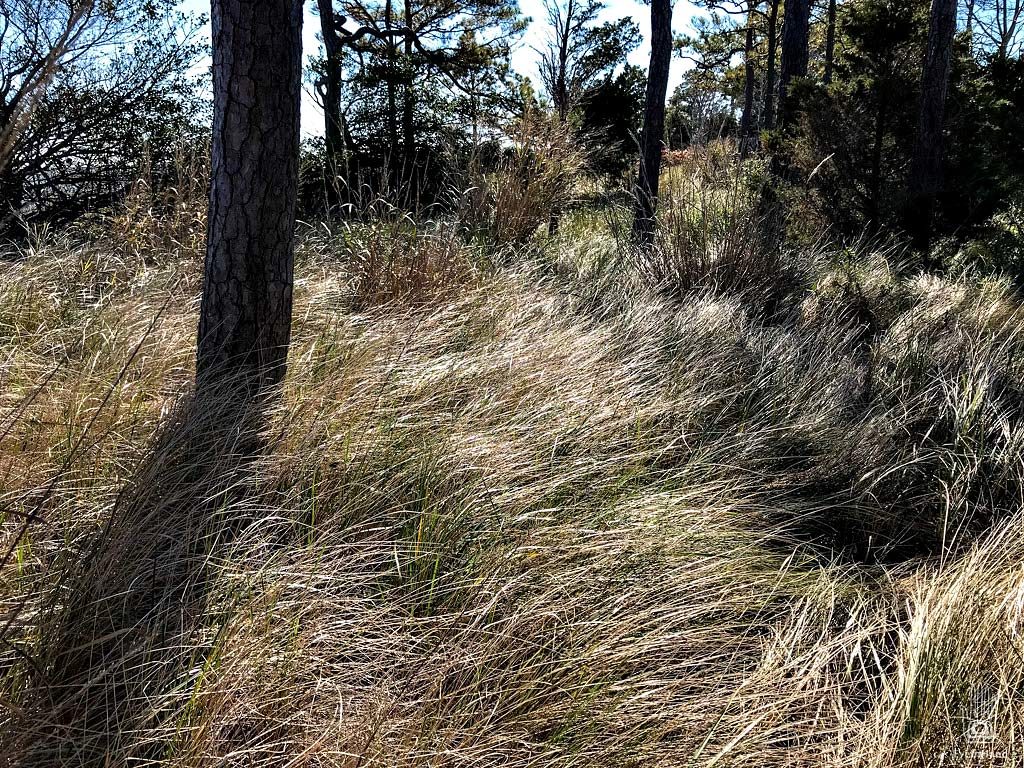 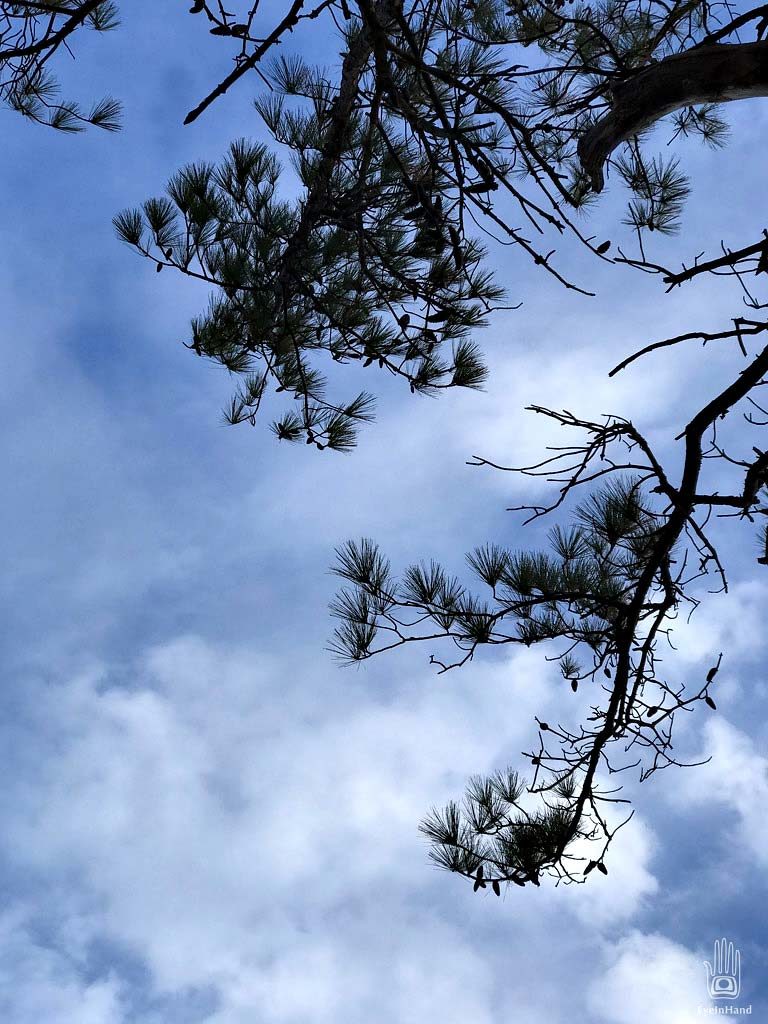 On the other side, the land narrows to little more than a sand spit. A new duck blind hunkers on the crest. Still fresh and green, inside it smells of pine sap. Boot tracks lead up from a creek on the marsh side, a dent left in the sand by the bow of a skiff. Maybe Wesley.

Here the island falls apart. Nothing but tendons and sinew. Wind sweeps from Bay to marsh, exposing root stubs, rusty crab pots, bits of rope and battered buoys, all half buried in streaks of sand. 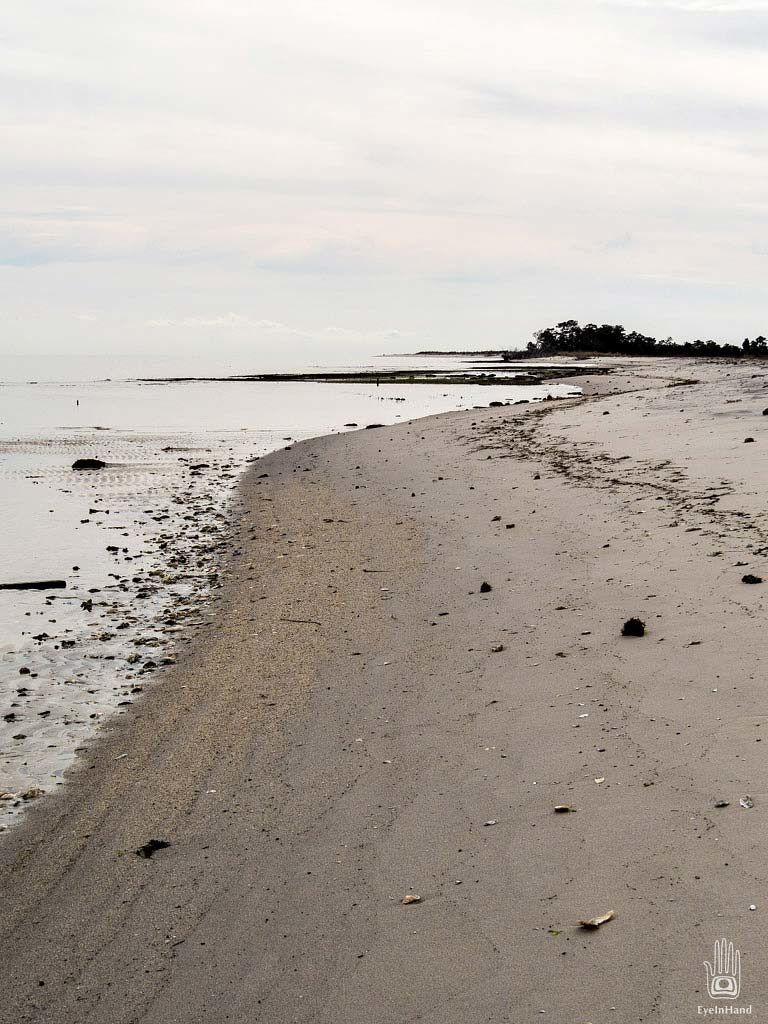 A new breach has cut through. It severs the last 10 acres of land from the rest of the island. Divide and conquer. The tide is out, so I pick my way across 100 yards of rippled wet sand to the other side. Sandpipers sew stitches in the puddles, a flock of nervous tailors mending the rend, supervised by a stoic Heron. 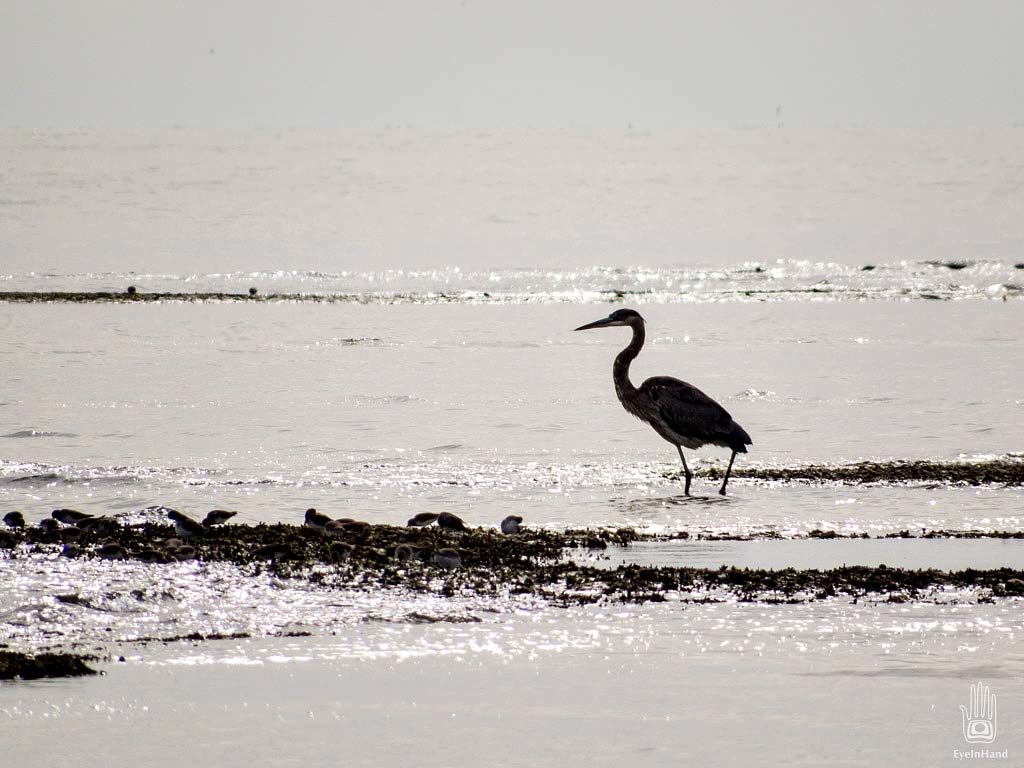 On the other side finally – for now – is the end of the island. Beyond that, the old breach where the storm of 1978 broke through. It’s now a new inlet almost a mile wide. Waves march in from the Bay.

What was land is atomized and dispersed into the marsh. Outside, to the south, the beach is growing. A broad eddy deposits sand onto a shoal extending perpendicular from shore and into the Bay. You can see it arc away as lighter colored water toward Wolf Trap Lighthouse three miles out. Wind driven waves from the North crest on the shoal and break, leaving calmer dark water to the South.

This shoal is another sign of how things are changing. The new inlet has altered dynamics of current and tide. 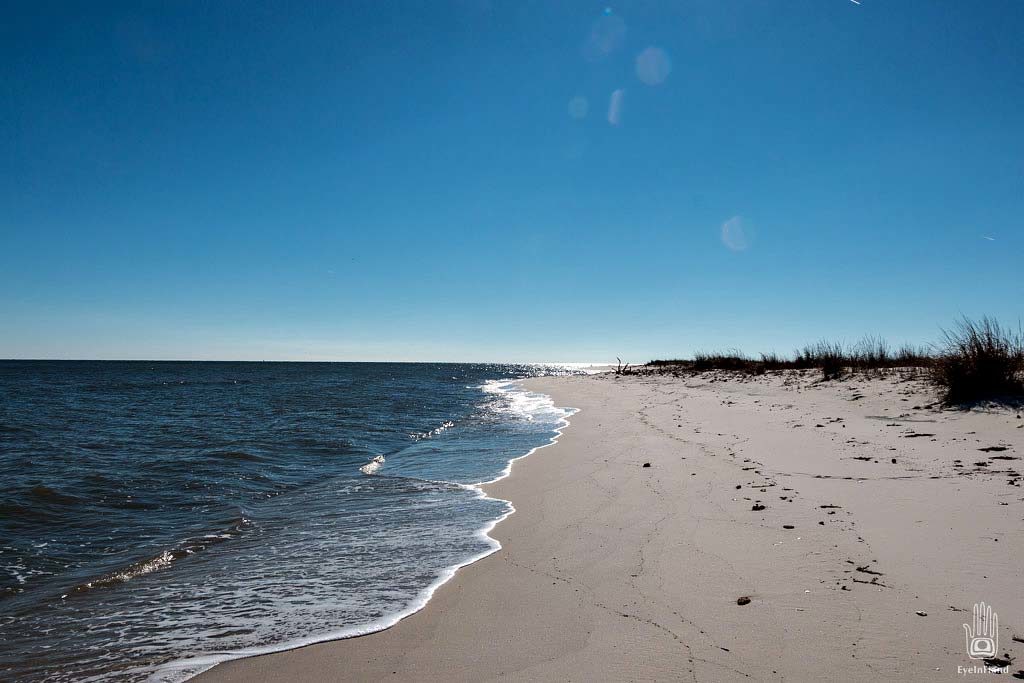