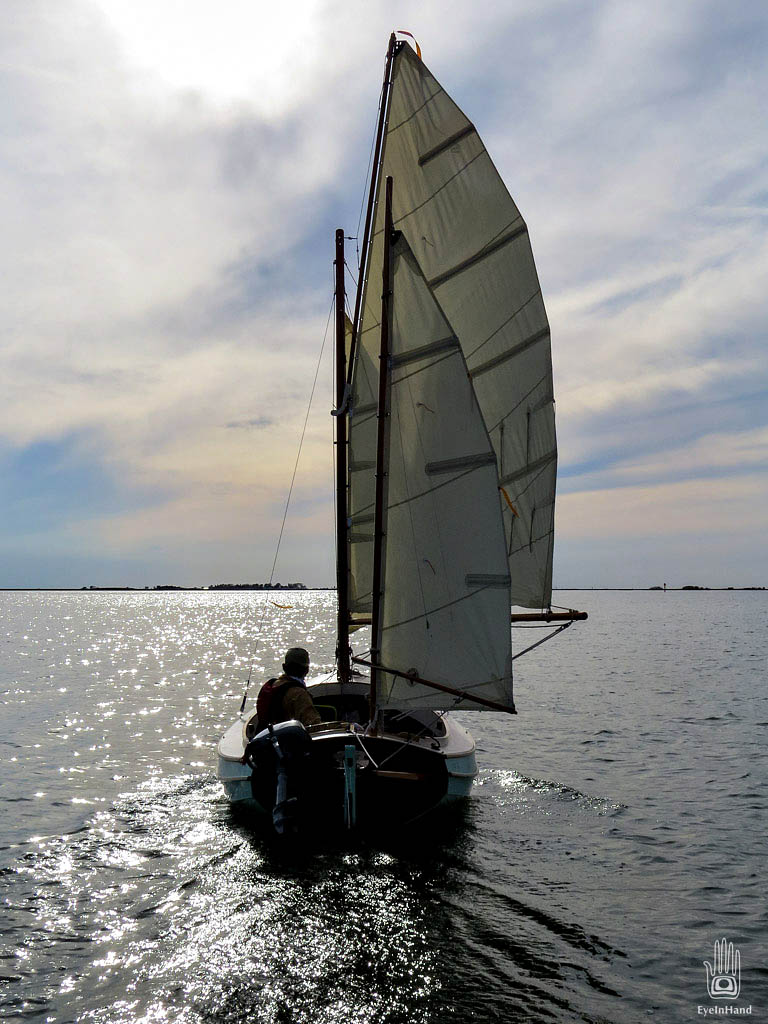 From the ramp at Janes Island State Park it’s a half mile down a straight and narrow canal to open water. Separating Janes Island from the mainland, the canal is just wide enough for small boats to tack into a breeze. Tall pines line both banks, making a trough that channels the wind, so in the canal it blows only one way or the other. We have a light headwind, but the tide is with us. 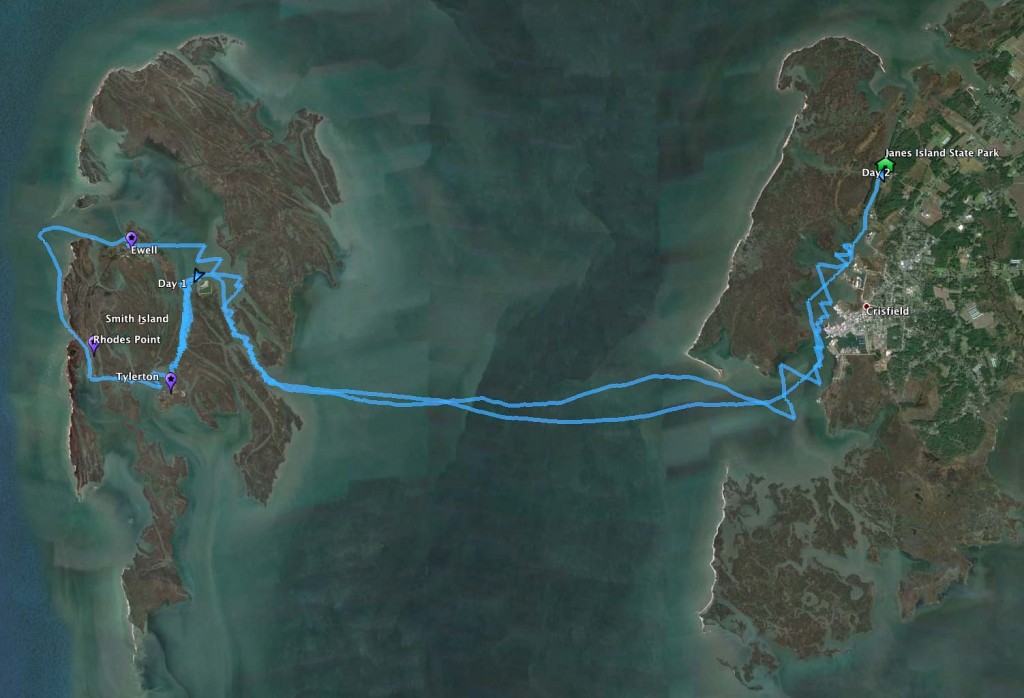 The start of a long trip is a good time to take it slow, take time to get things sorted out before you’re too far from the stuff you left in the car. We’re in no hurry yet. Obadiah glides right up to the bank, sweeps her bow through the grass, spins and tacks away. 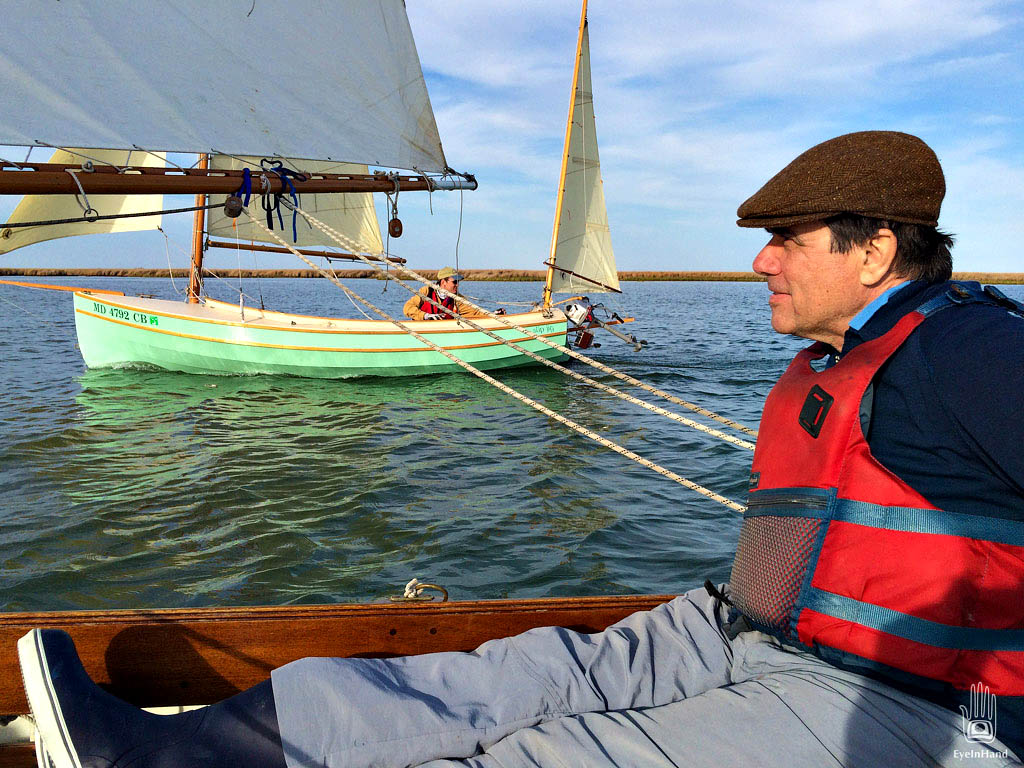 Pete Peters at the helm of Obadiah, alongside Slip Jig in Big Thorofare

We have nine boats this year. The other four stay near shore, waiting for friends to arrive. We five are heading to Smith Island for the night while there’s a weather window open.

Smith Island is an unusual place. English and Welsh arrived in the 1600’s and never left. You can still hear Elizabethan in the islanders’ accent. Barely above sea level, it stretches the definition of the word island – as much is-water as is-land. Laced with waterways, canals, creeks and marshes, you travel both to it and within it by water. An American Venice.

Out of the five days we allowed for it, the first two offer the best chance to get there. A big storm front will come through sometime late tomorrow, though the timing keeps shifting. We’ll need to get over and back before it does. After that, who knows. Plans are fluid.

I decided to leave the Melonseeds at home this time. Smith Island is just far enough away, and the Melonseeds just small enough, that a change in weather might mean waiting out conditions the larger boats could risk. For the first time I’m crewing with Pete Peters aboard his Marsh Cat Obadiah, a beautiful boat I’ve sailed alongside for many years.

This will prove a wise decision. It’s hard to work a camera, and the sheet, and the tiller, with just two hands. Crewing will let me attend to the camera alone, a real luxury. And Pete, it turns out, has a great sense of where to put us to get some wonderful shots over the coming days. And the weather will indeed take an bad turn, a little sooner than expected.

At Crisfield we pass the town harbor, catch up with the others, and head due west, the boats fanning out across Tangier Sound – two Marsh Cats, a Sooty Tern, a Navigator and a Haven 12 1/2. 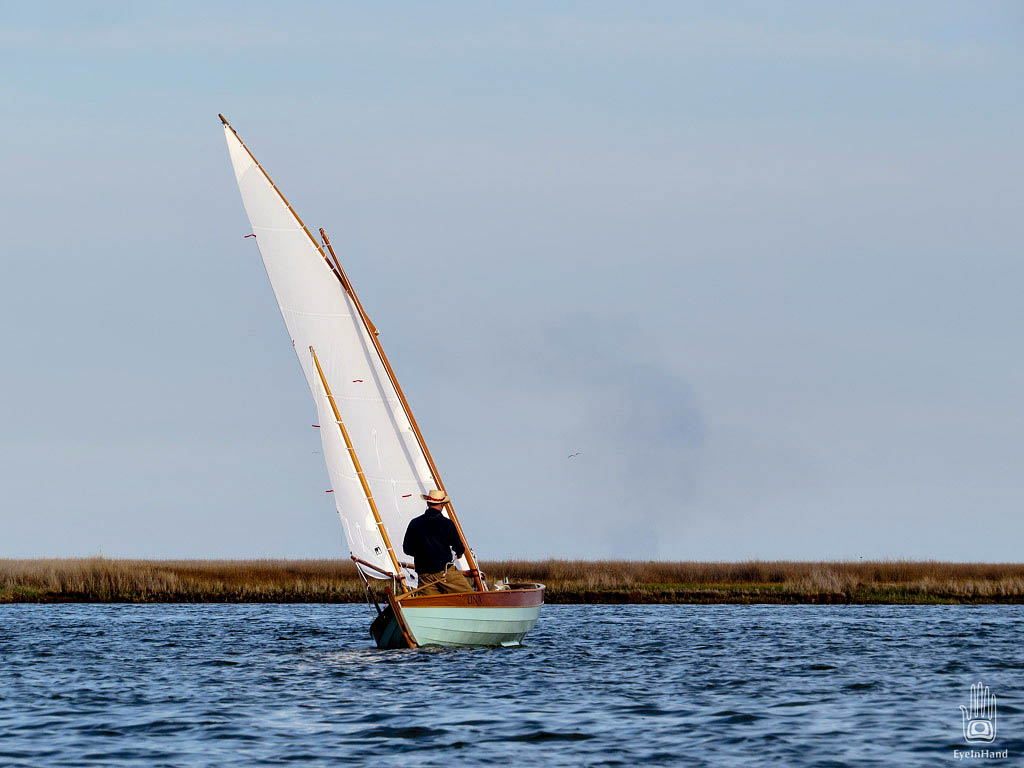 The day is clear and warm for the end of April, the wind light and steady, and the afternoon sun burnishes the water like brass. In the distance a smokey line on the horizon, the apparition of land refracted into the sky, leads the way to Smith Island.

Lights of Tylerton at sunset 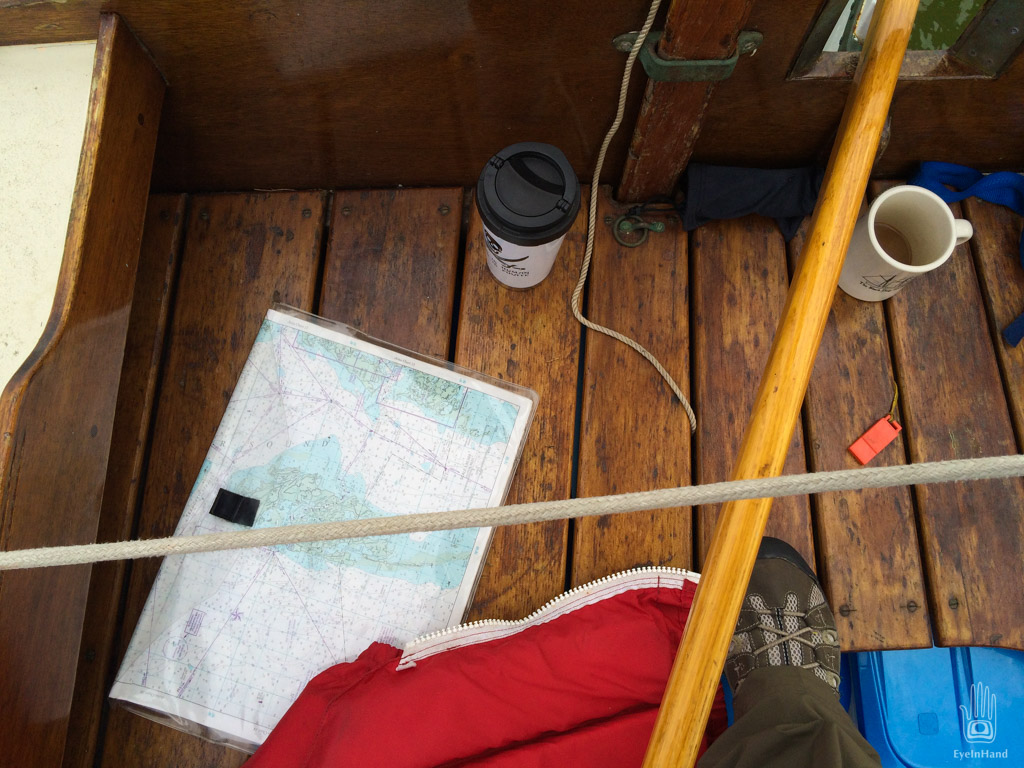 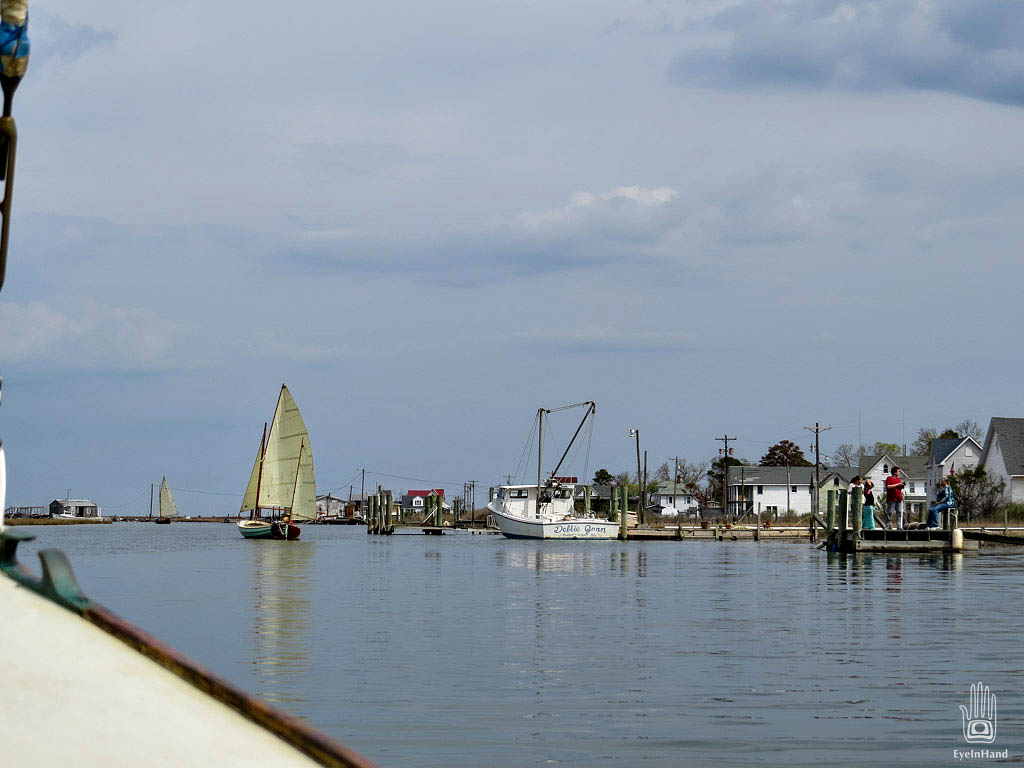 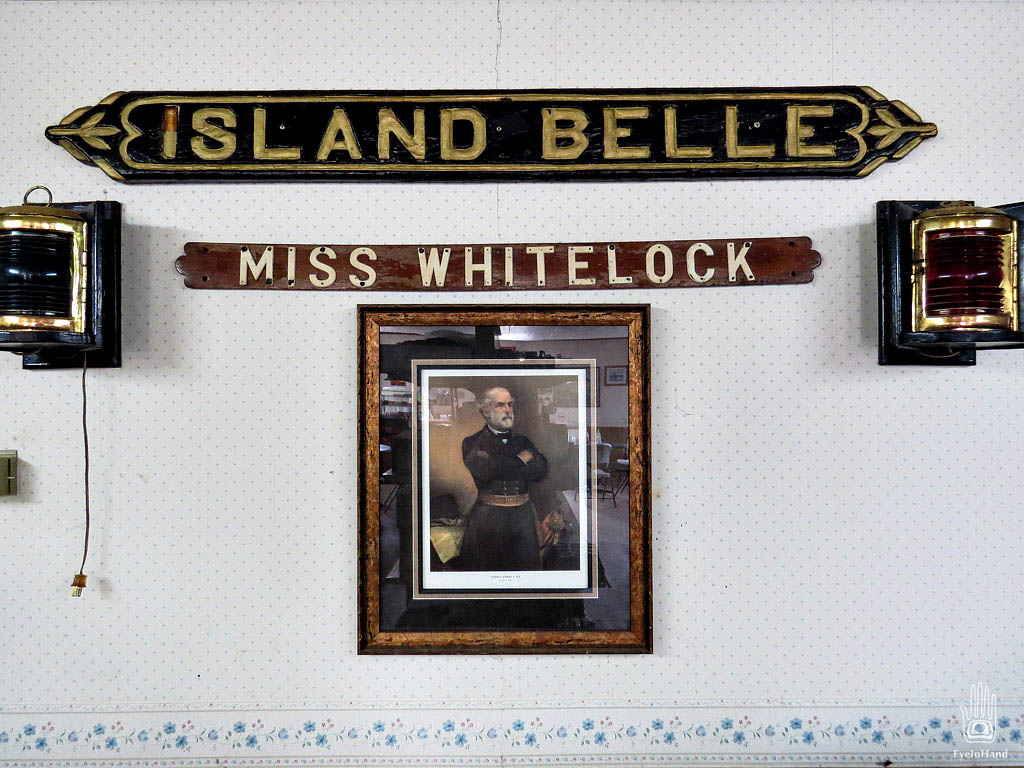 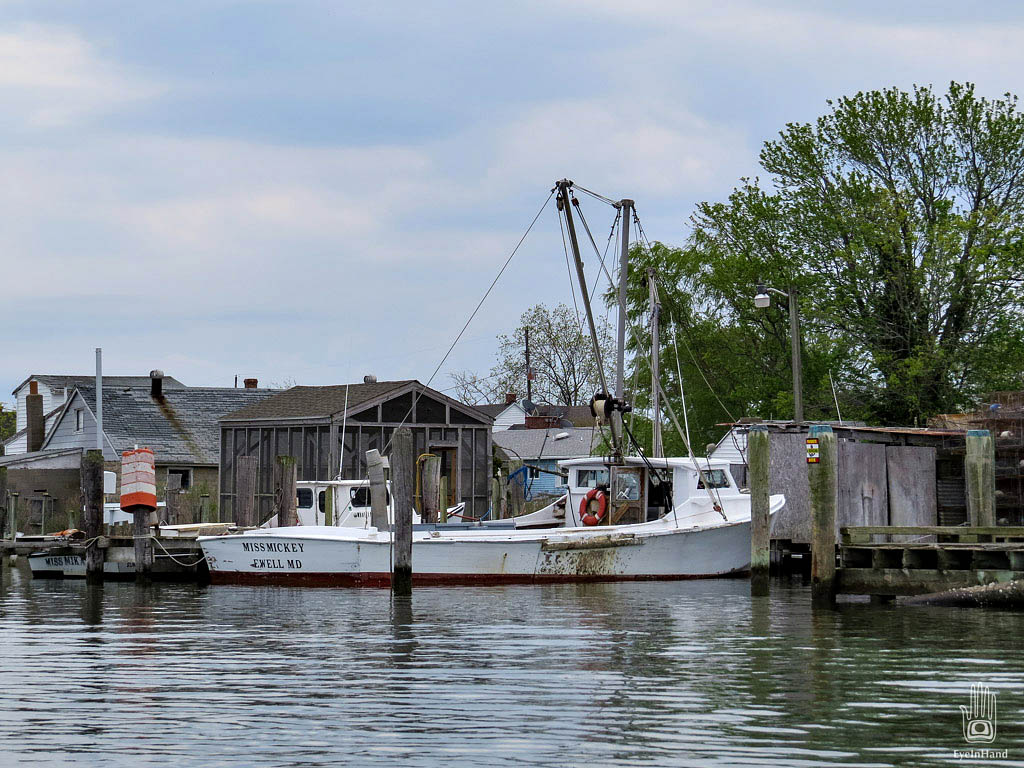 Una ghosting out of Ewell before the storm 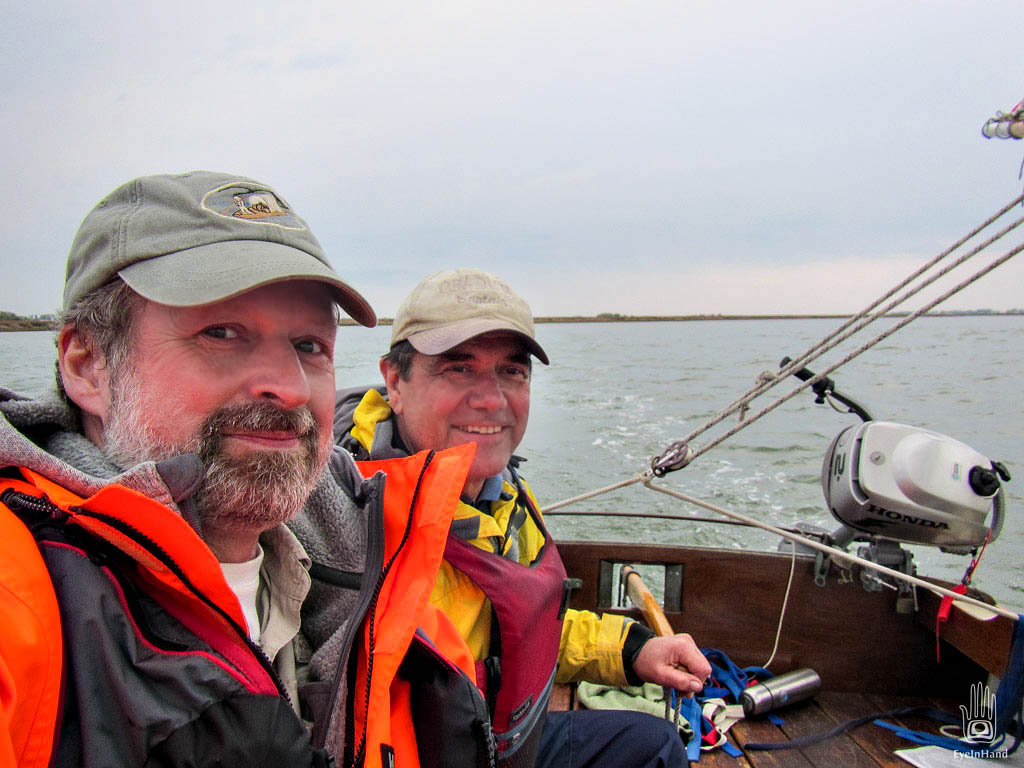 The next two days will bring some beautiful sailing in and around the island. We’ll overnight aboard the boats in Big Thorofare at North End Bottom, then pass through Tylerton and Rhodes Point with a stopover in Ewell.  Ending with a spirited run across the Sound ahead of the storm, a broad reach back under dark skies and blowing spray.

Read the rest in the July 2015 issue of Small Boats Monthly, a WoodenBoat publication. A month of access, including the current issue and the full archive, is $2.99. You can cancel a subscription at any time.