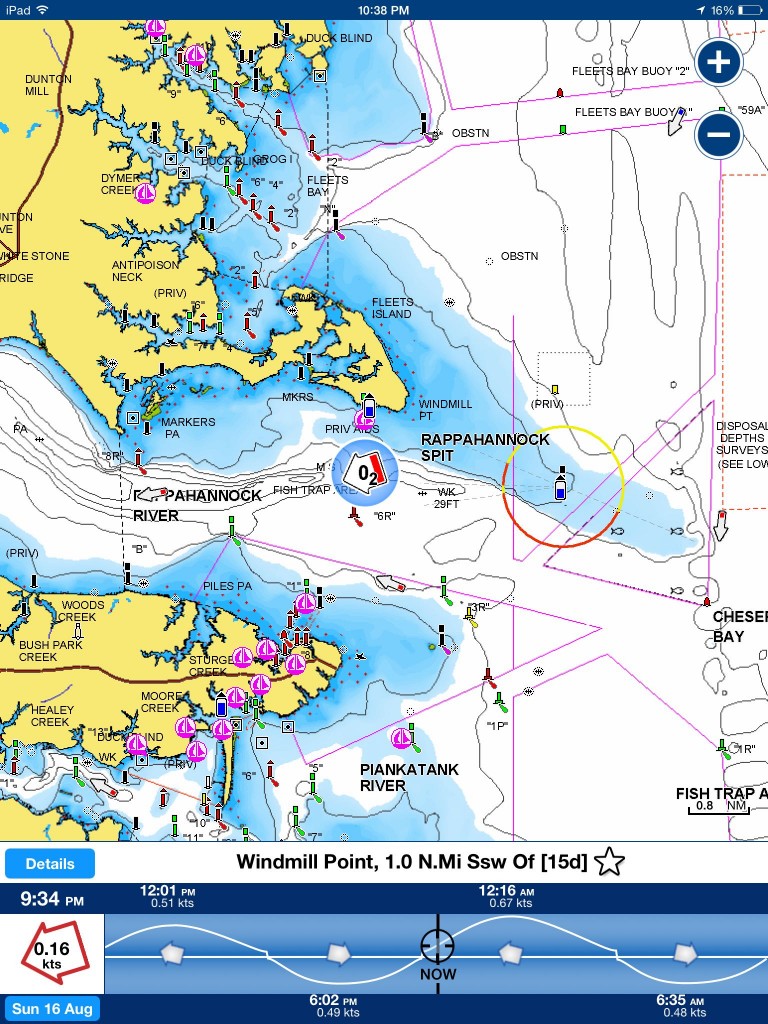 One of the benefits of sailing with other small boat people is sharing information. Small boaters are resourceful and inventive by choice and necessity, so any trip with others always sends me home with new ideas or info. Everything from camping gear, to boat maintenance and building tips, to tricks for doing even basic things you’ve always done one way. The trip around Gwynn’s Island was a good example. Curt has fitted out Annie with many small details that make life easier aboard, especially for single-handing. A home-made roller reefing system for his jib, a folding boarding ladder is another, bungie cord mounted on the cabin bulkhead to hold charts, etc.. Steve shared the pros and cons of using his new GoPro camera. I still use an inexpensive LED lantern he recommended, for both a general purpose camping and anchor light.

As we looked for the approach to The Hole in the Wall, I pulled up the chart on my phone. It showed the most recently recorded locations of the channel markers, depth soundings, tide charts, and our location and course bearing plotted on the chart. Very helpful for pointing us in the right direction until we could see the channel markers. Especially in a sailboat, where approach relative to the wind is so important – we wanted to shoot across the bar on one tack. 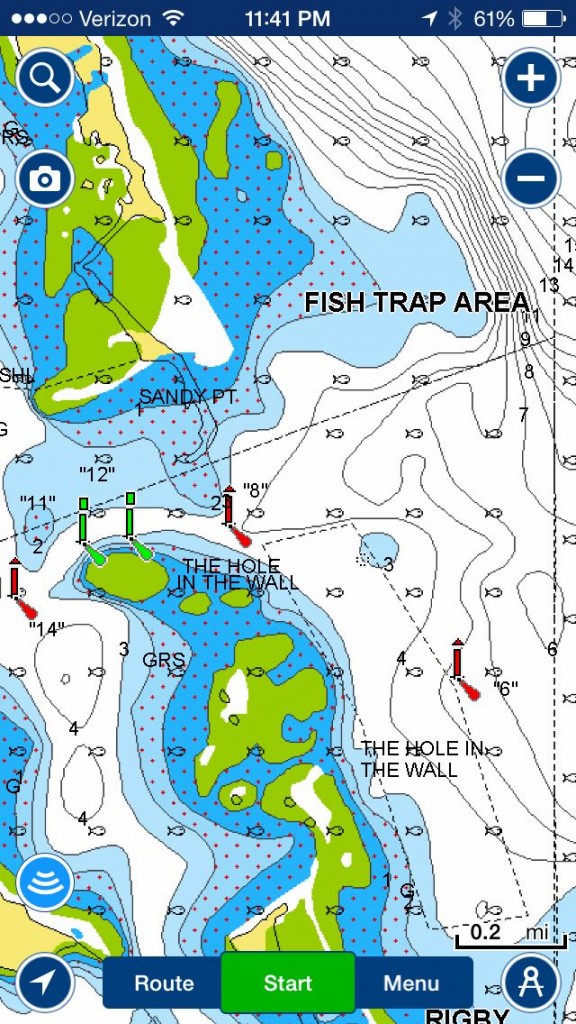 The same app came in handy on the trip to Smith Island, for the same reason. In that case, we wanted to hit the island close to Big Thorofare, before the wind died, and follow it to the interior. We wanted to get the actual entrance, not one of the many winding alternates that peter out in the marsh.

In both cases we carried paper charts. Printed charts tell you where you want to go, and don’t want to go, but can’t tell you where you are now relative to either. And, as anyone who uses paper charts knows, many charts for remote areas have not been updated in decades. Some become outdated quickly, especially for shoaled inlets where channels constantly shift around. The particular app I used is supplemented with user supplied data, so the digital charts are far more up to date. Steve asked me to send him info on it.

There is also a weather app I used when we were sailing in the Elizabeth River together, when a strong thunderstorm suddenly appeared. Popup summer storms grow quickly, and it’s difficult to tell which direction they’re going just by looking at them. It was helpful to see on local radar which way it was headed so we could stay out of it’s path. He said the biggest storm he ever encountered on the water was not even acknowledged on the NOAA Marine Weather radio. He wanted to know about that one, too.

I realized there was more detail to share than would easily fit in an email, and I may as well post it here where others can find it, too.

I always carry a handheld GPS. I like the Garmin 62st. I think Steve uses one similar. It’s small, rugged and waterproof, and lasts a couple of days on two AA batteries. It records sail tracks, marks waypoints, shows current speed and bearing, and a bunch of other useful things. It essentially stays on all day, clipped to something in the boat where I can see it and not worry about it. The detailed Topo maps included are very useful on land, and let you know where you are on the water, relative to the coastline. But they don’t include critical marine info unless you buy those maps separately, and they aren’t cheap.

The biggest plus of these tough little units is they’re waterproof and easy to carry. The biggest downsides is the screens are tiny and the interfaces are infuriating. Typing anything into them is worse than typing in Morse Code. It’s far better to use the included desktop application on a computer to enter waypoints and routes ahead of time, then transfer the data, which requires forethought. I only use the built-in keypad when I absolutely have to.

These are great, reliable backups. I wouldn’t take a trip without one. But because the screens are too small for my old eyes, I didn’t bother paying extra to get the add-on marine charts. That’s where the apps come in, which are frankly better, easier to use, and much less expensive.

My current favorite is Boating USA by Navionics. I use an iPhone, but they make an Android version, too. For $9.99 you get the app and unlimited downloading of detailed, easy-to-read charts for the whole US (there are International versions available). You also get a year of updates to those charts, which come out frequently, along with some advanced features. At the end of a year, you can keep and use all the maps downloaded, but the updates stop, or you can subscribe for another year for $4.99. Very reasonable. A little known fact is the GPS units in the phone work even when out of cell tower range. As long as the maps have been downloaded, the apps continue to work normally. 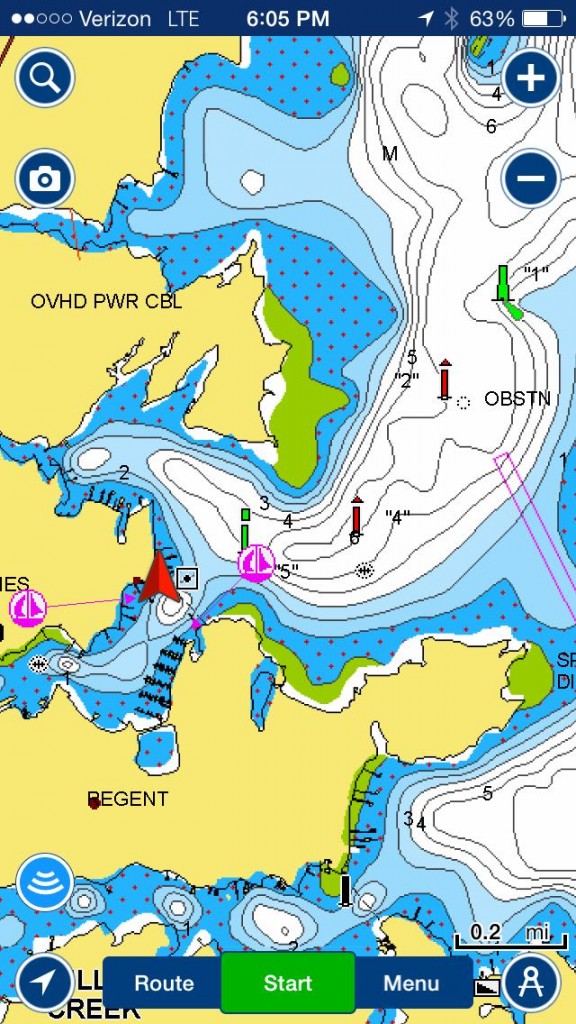 You can try out the app for free, using only the NOAA government charts, but then you’re no better off than having paper charts. The proprietary maps are so much better they are well worth the modest price. There’s an iPad version called Boating USA HD, which is $49.99. Some apps allow you to use the iPhone version on an iPad, too, but I did not find that to be the case here. You have to purchase it separately.

I ended up getting the iPad version, as well, because I really like using it at home for planning. On a bigger boat, with a waterproof case for the iPad, I would definitely use it instead of the phone. It has the added ability to connect via wifi to some equipment on large boats, like sonar and chart plotters, though I haven’t yet added those to the Melonseeds ;-). 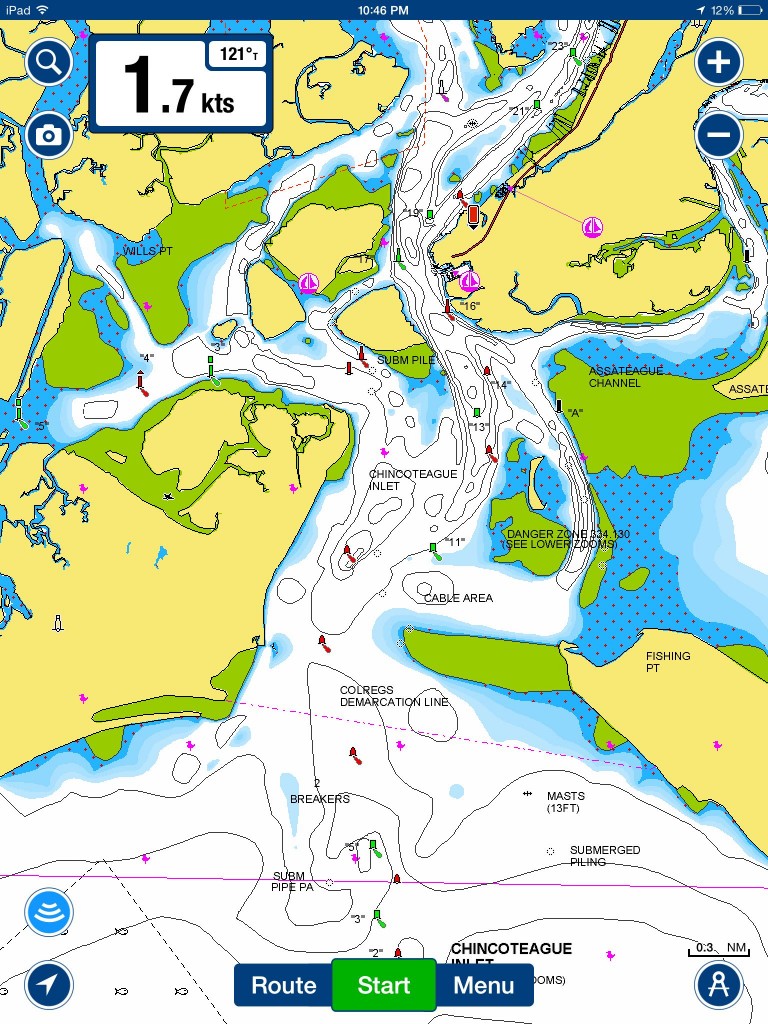 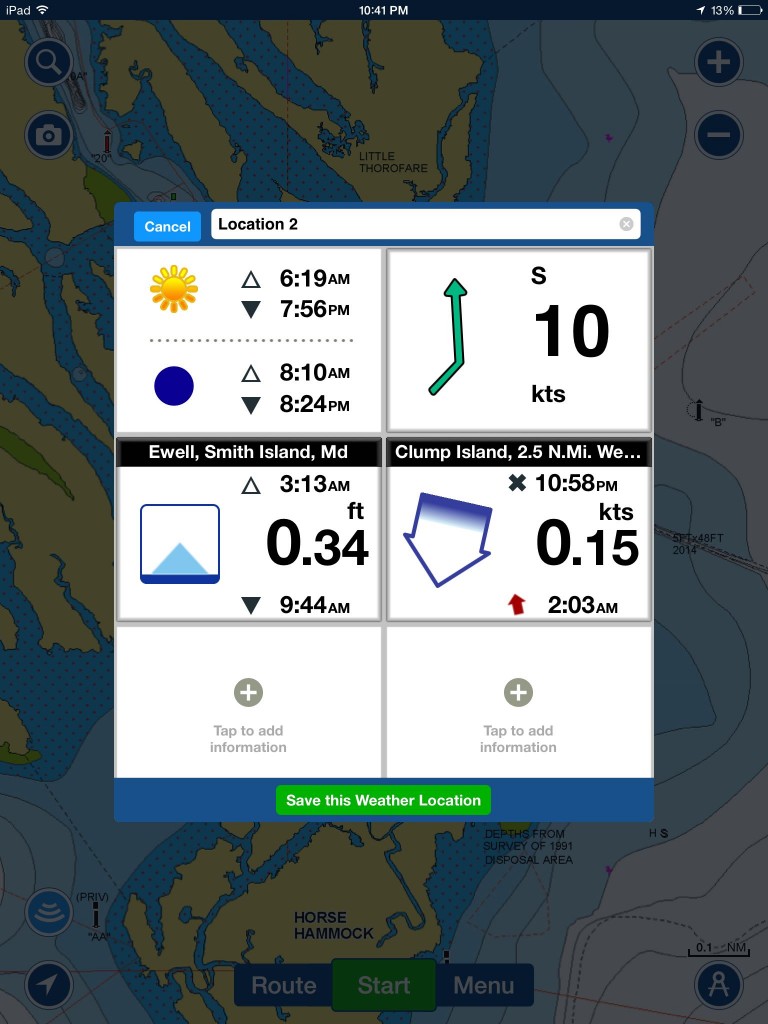 Some really nice features to note: You can customize the map according to your needs. For instance, with my shallow draft I can set the depth contour warning to 1 foot or less. For a larger boat you can set it higher, in 1 foot increments. I shows tide info for your current location or destination – very handy for shooting inlets. And shows prevailing currents of major waterways from buoy data where it’s available. If you like, you can display additional layers over the marine charts, like terrain, or satellite imagery, which is sometimes handy for showing shoreline vegetation and coastal development. Marinas are marked, even obscure boat ramps.

For more advanced navigation, there’s another app I like called iNavX, though it’s really beyond what I need for small boat inshore sailing. For longer cruises in bigger boats this might be more useful. Or maybe you just like to tinker with more complex navigation features. For instance, it integrates with AIS transponders to keep track of commercial traffic.

The built-in maps if iNavX are not as good as Navionics, but the features are far more extensive. Want your cake and eat it, too? You can use Navionics maps in iNavX. The Daily Double! Unfortunately, you have to buy the maps with a separate subscription to do that – you can’t use the maps downloaded for one app in the other – but if you really want everything, and need the extra bells and whistles, this would let you have it all.

iNavX is available as an HD version for iPad, though I don’t think they make an Android version.

The weather app I use most is by Weather Underground. It’s free with ads, works on both iPhone and iPad, or you can get the ad free version for $1.99 year year. There is an  Android version, too. 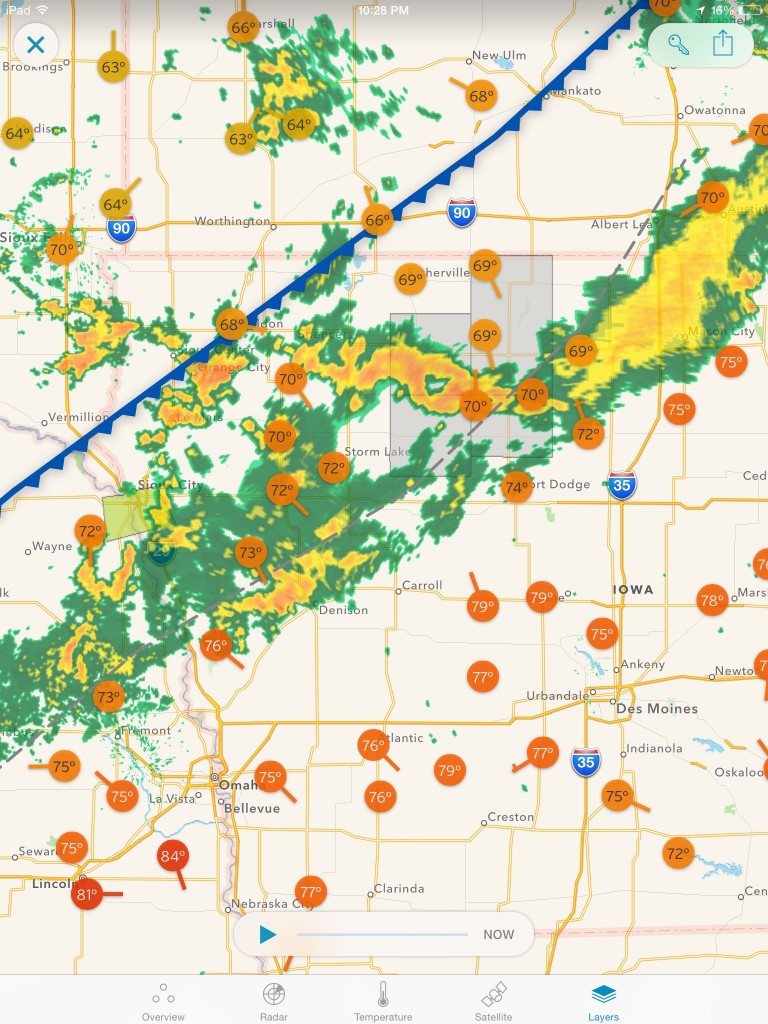 I’ve been a big fan of their website since the early days when Dr. Jeff Masters started it up. A few years ago, they merged with the owners of The Weather Channel. With access to new resources, development of the mobile apps improved tremendously, though it now has almost too many features. The most important thing for me is access to realtime data – radar, for storm tracking, and the vast network of linked government, commercial and user weather data stations. Besides storm tracking, these provide realtime data especially important to sailors – wind speed and direction – measured at multiple locations nearby. You can also turn on alerts for specific locations, to be warned of severe weather approaching. Overall, very handy. 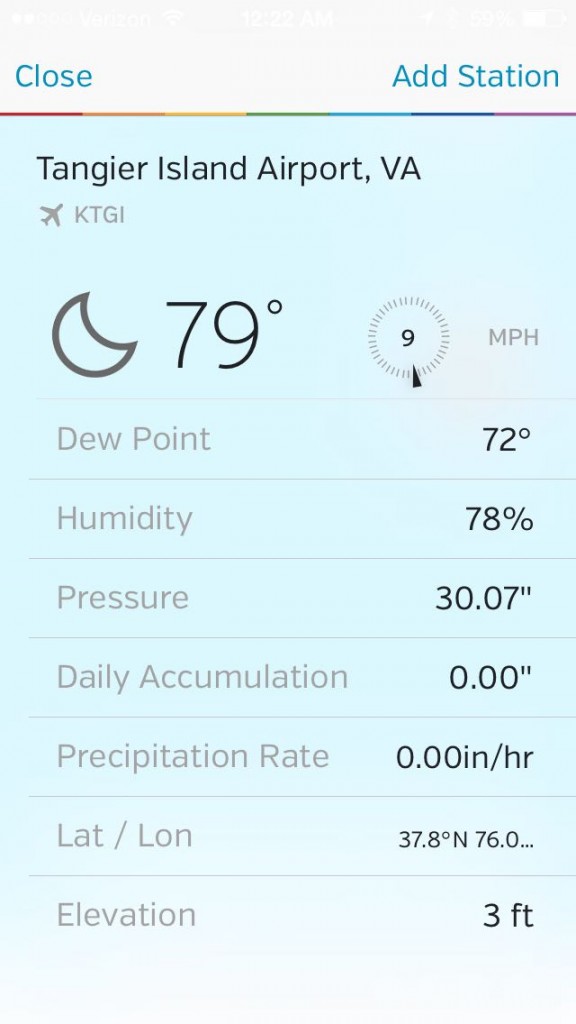 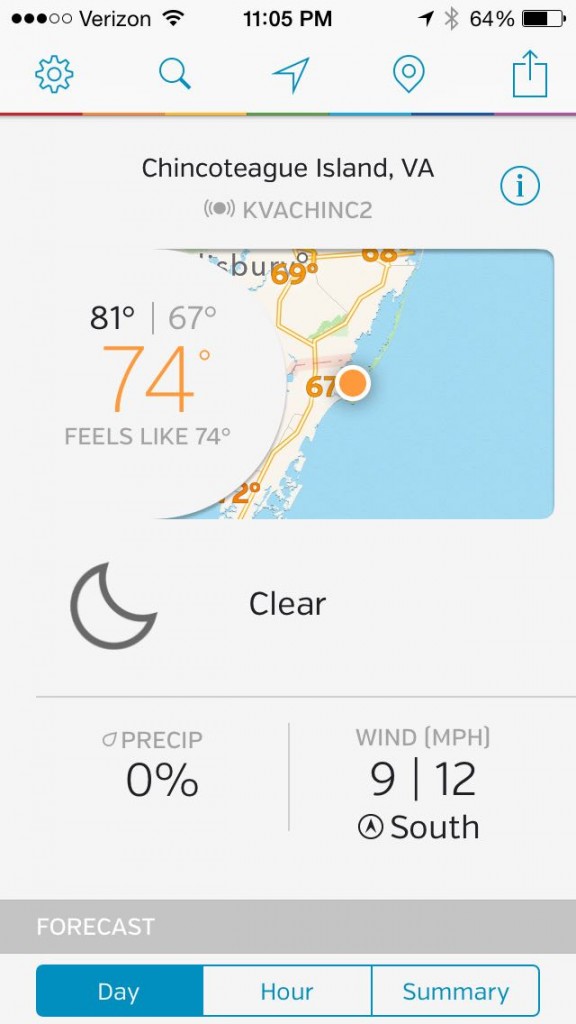 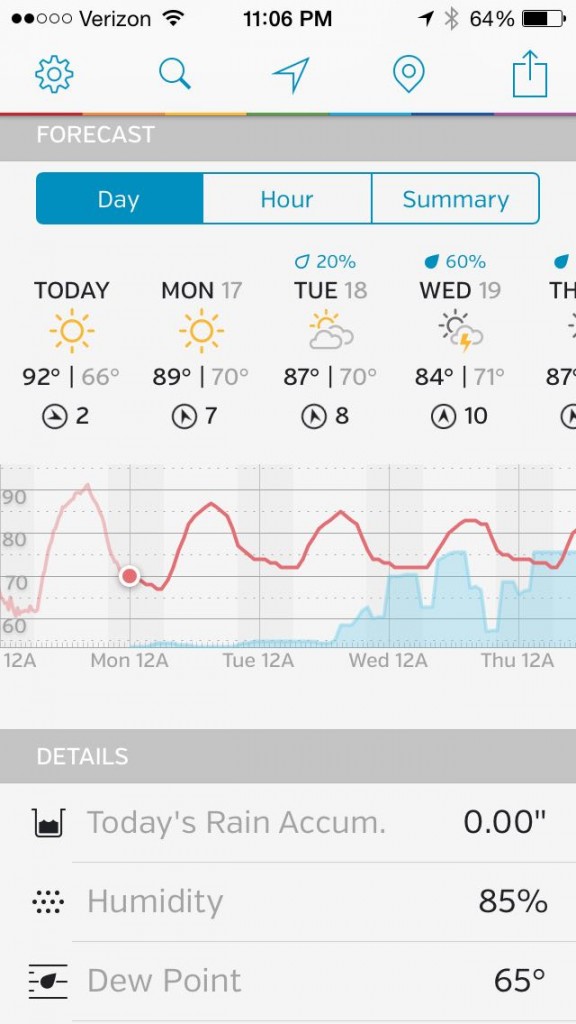 Some buoys are included in the WeatherUnderground weather stations. To get them all, and get true on the water data for wind (which is often quite different from land based stations), plus other critical info like wave height and tides, there are several good free apps available. For the Chesapeake, there’s the Chesapeake Bay Watch app, which is very readable, though wind and wave data – the most important for boaters – is irritatingly on the last of several pages. More complete nationwide NOAA buoy apps include NOAA Buoy Data, which is free, but I find the dark screen very hard to read. The NOAA Buoy and Tide Data is far easier to read for $1.99.

Besides the fact they aren’t waterproof, one downside to relying on phones for navigation (or anything, for that matter) is the batteries drain quickly when you use them a lot. That’s a real problem on multi-day cruises. I know Steve has experimented with solar powered chargers, and says he’s very happy with his current set up, a must on the long cruises he takes away from shore power.

For the past few years I’ve been using an external auxiliary battery pack charger, the Anker Astro E5. It cost less than $40, is not much bigger than the phone, and works very well. It takes all night to charge it, so I have to remember to do that in advance, but holds a charge for months at a time. 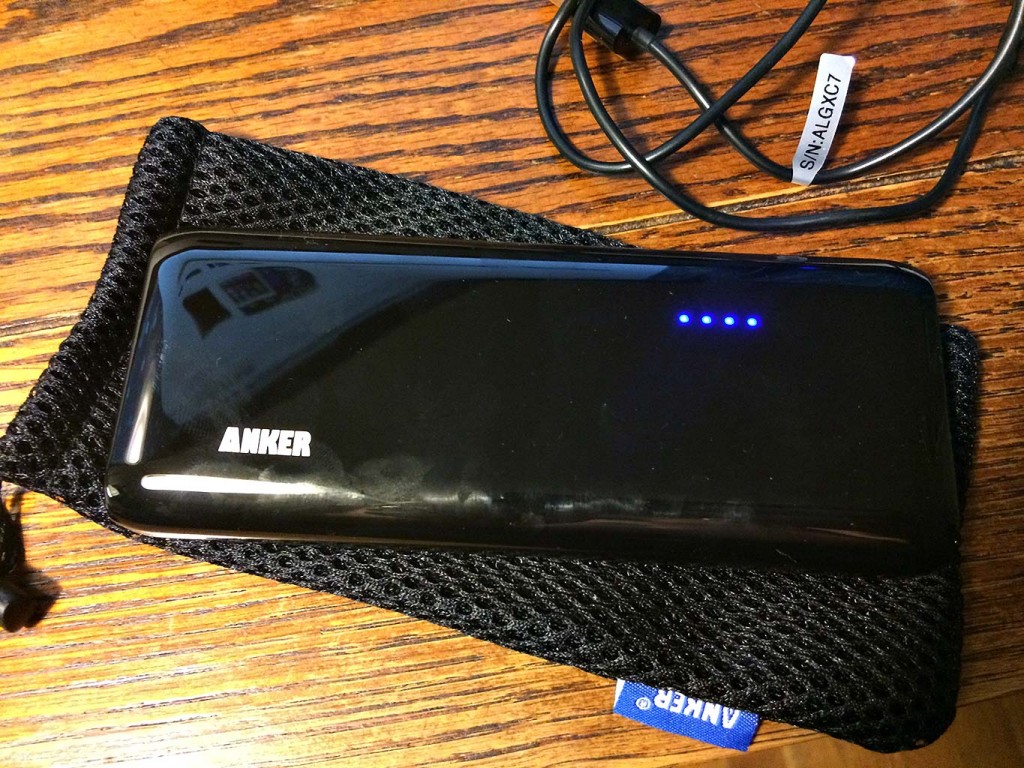 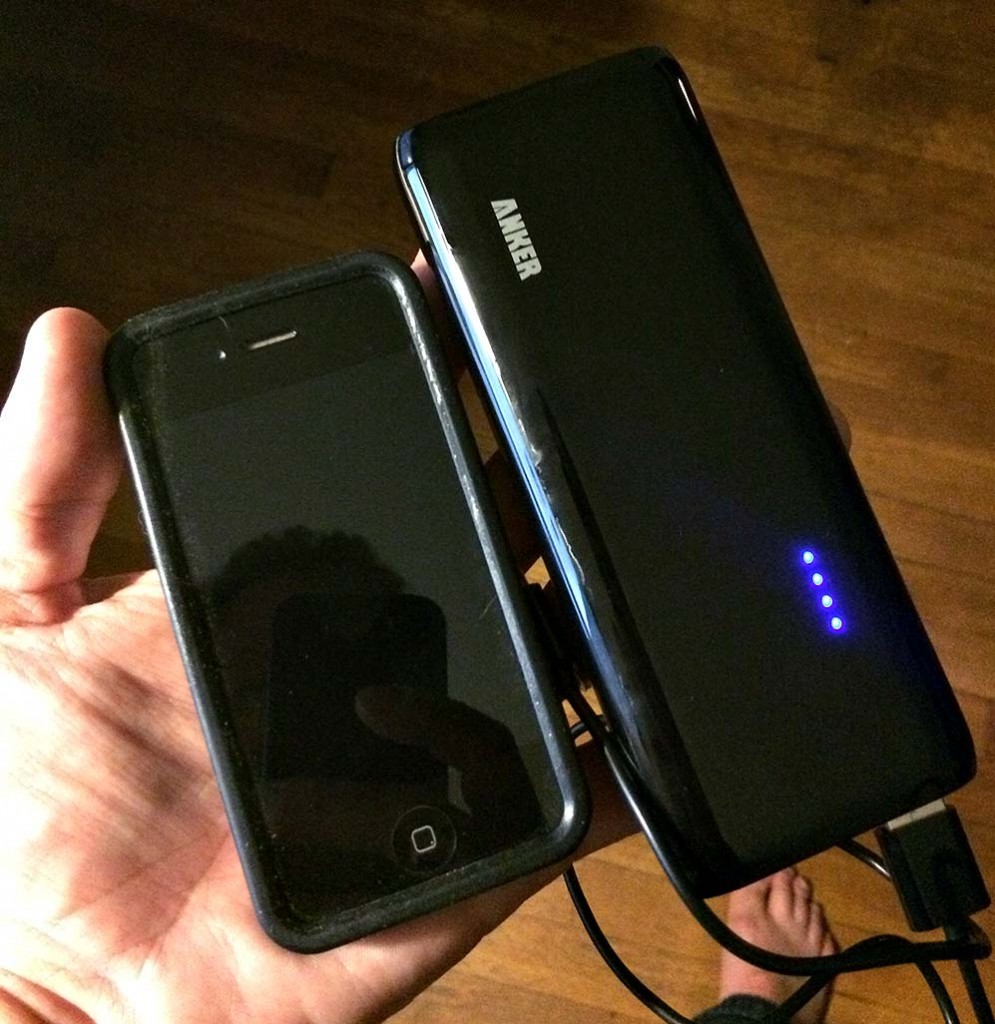 Once full, the 16000 mAh version will recharge an iPad about 4 times from empty (no small task). It will completely recharge my phone from dead about 8 times. If needed, I can use the phone while it’s charging, and the battery pack is small enough to make that doable. For me, that equates to about 8 days of heavy use before I would need to find an outlet somewhere. It’s cheap enough and small enough that if I needed more I could take two, or get one of the higher capacity models now available.

Now, if Apple would just make a waterproof phone, I could leave the GPS at home and have everything in one package.