I made some things. Did you find them?

Terri had to go back early. We sailed over in the Melonseed and dropped her at the marina. When I got back, she texted clues to find things she’d hidden around the island.

It wasn’t that hard. I found her trail a few steps from the kitchen door, and easily followed her meandering path for a quarter mile through the dunes. With so few people on the island, a single series of footprints is like a story written in large print. Here she stopped to ponder a pile of bones, here at a clearing to take in the view of the marsh, enticed from here to wander in a grove of pines.

She’s inspired by Andy Goldsworthy, and often stops to arrange objects she finds on walks. Sometimes she forms elaborate designs. Sometimes she just moves things in subtle but meaningful ways. She likes to test me: Human-made or Nature-made?

Other times the test is not whether she made it, but can I tease out the secret message? Or there’s a pun spun into it somehow. 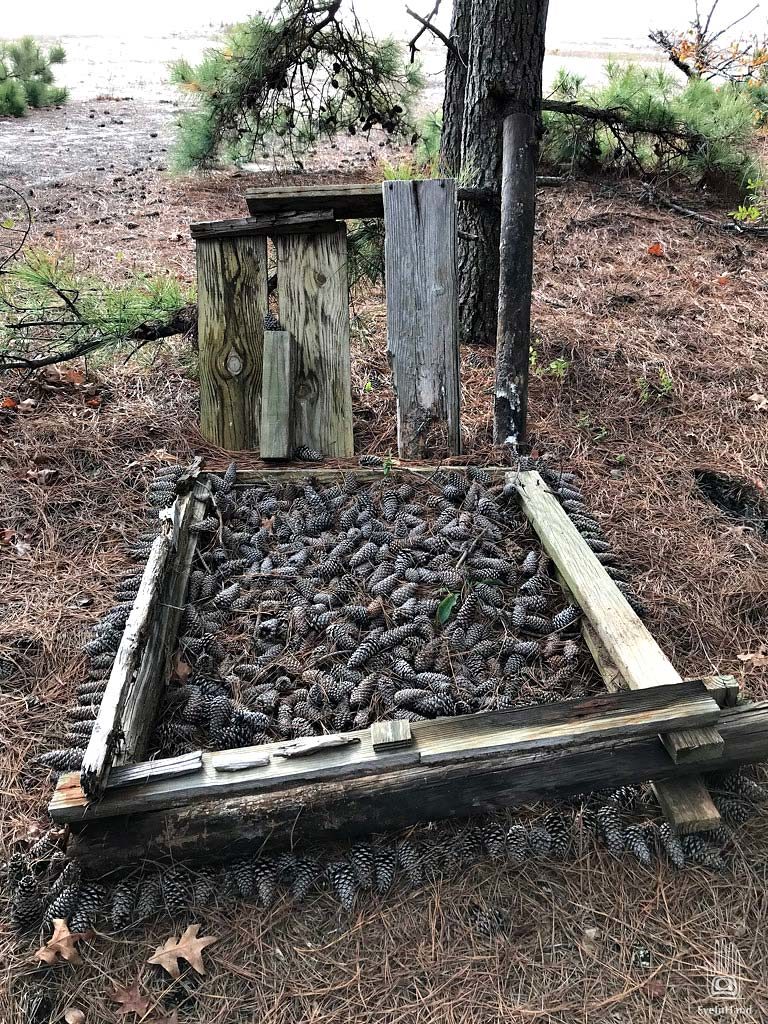 I’ve learned to spot her esthetic, even among various things left behind by others. 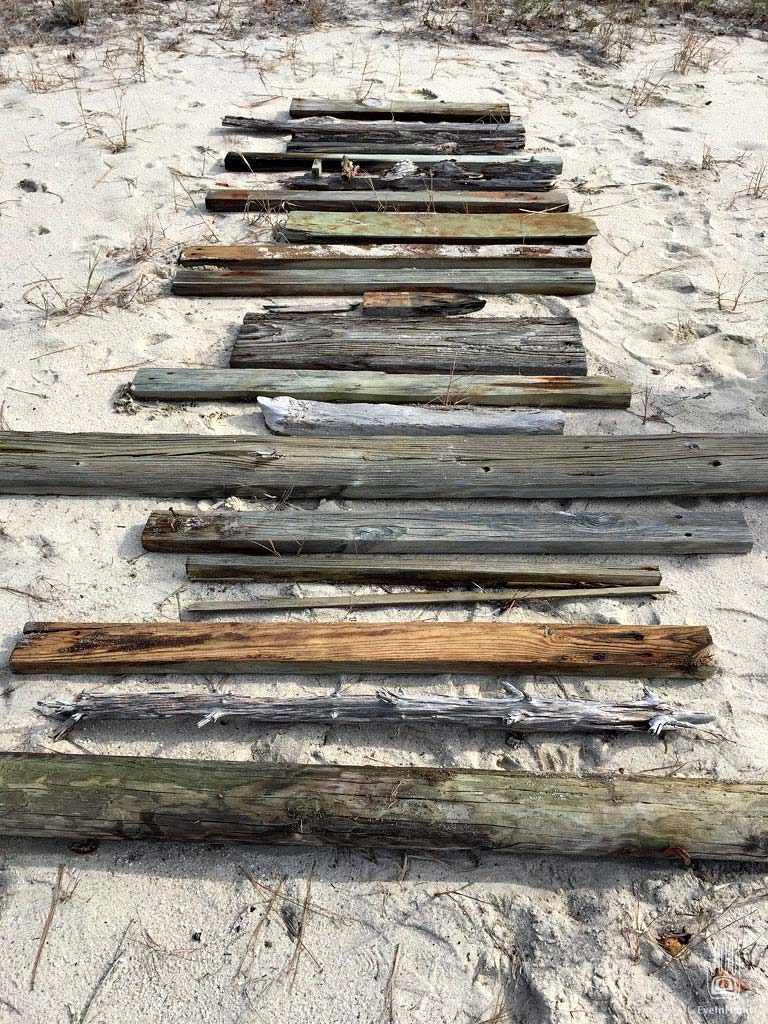 Lindsay is a lifelong painter. She leaves in the morning with a canvas, her coat pockets full of paint. She will be gone all day. I sometimes spot her way off at the fringes of the island, engrossed in work. We find palettes of cardboard stashed in the shrubbery, folded and weighted with a stick to keep the paint moist another day. 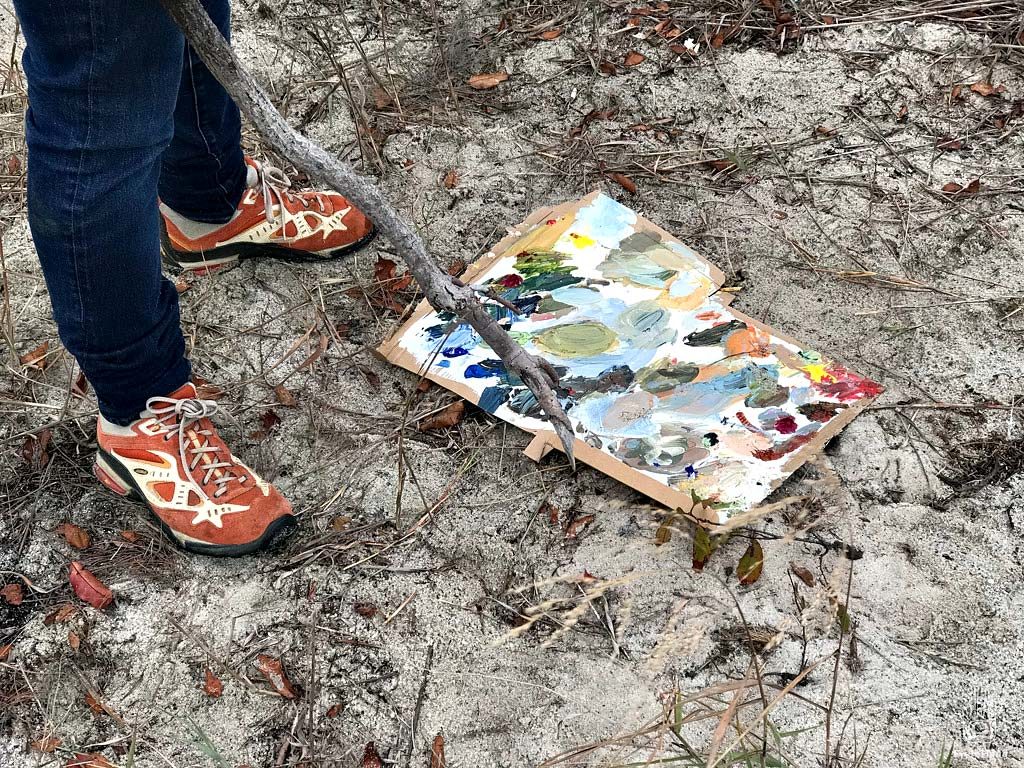 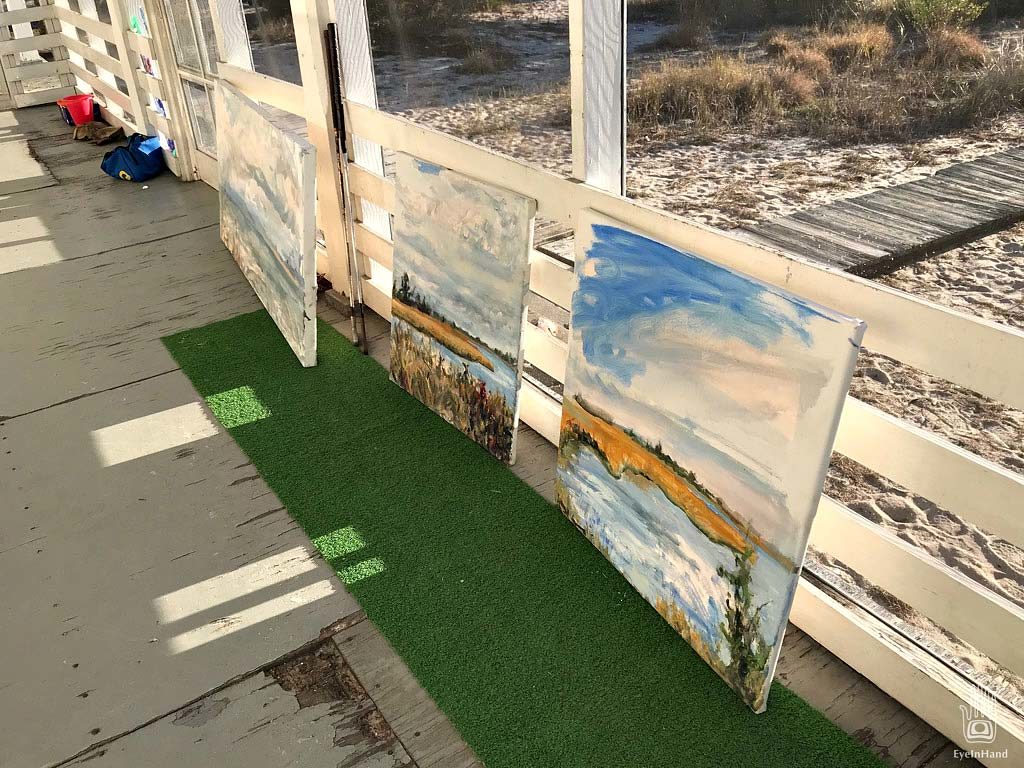 Sunny paints, too. Instead of large landscapes, she works small, and instead of painting in the landscape, of the landscape, she hurries back to the house where she works quickly, almost ferociously, to reconstruct fleeting visions from walks, even as they fade from memory. 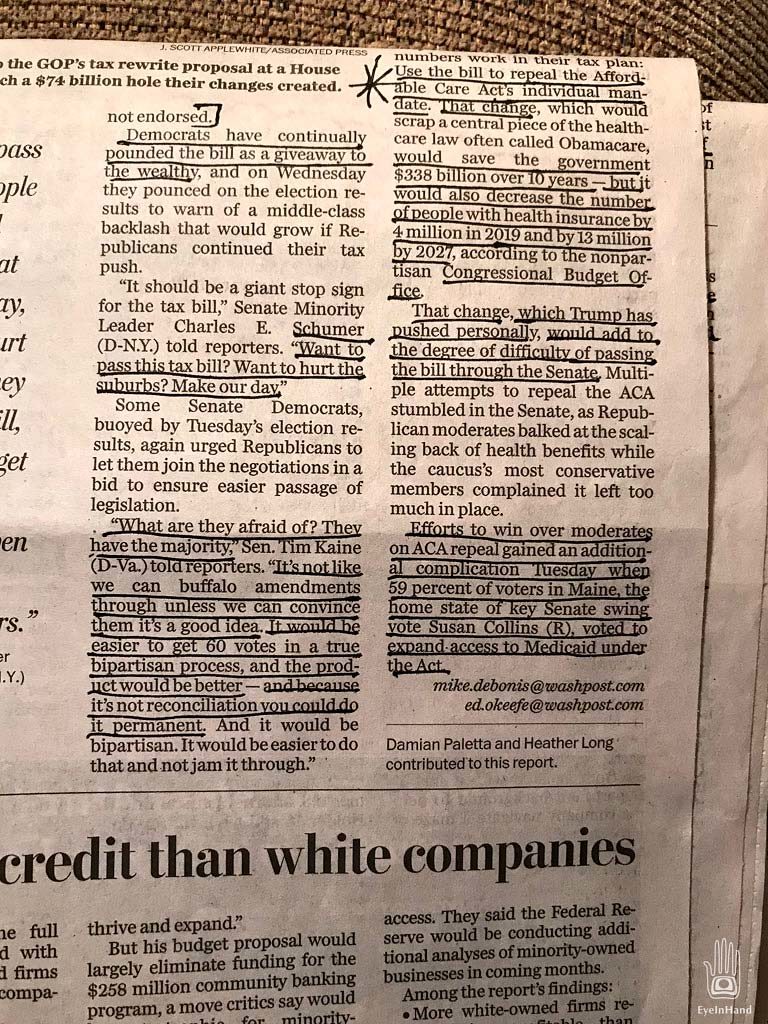 Bob is an information artist. He brought one newspaper for the week, which he rereads daily, front to back. Highlights passages, makes notes in the margins. Soon the entire paper is annotated and indexed in memory, added to a collection of facts and anecdotes he has cataloged and recalls at will, connecting seemingly unrelated themes and events spanning decades.

Toots is a chronologist. She began making hand drawn calendars back in the 70s, and has maintained a daily log of life ever since. Each square in the grid contains a single set of glyphs to represent life events – some large, some small – for each day in their life on the farm. She has been doing this, in one unbroken chain, for over 30 years, and has them all going back to the first. Family and close friends can read them and know their meaning. She stopped only once, last spring, but soon regretted it, and is now going back and filling in the gaps. 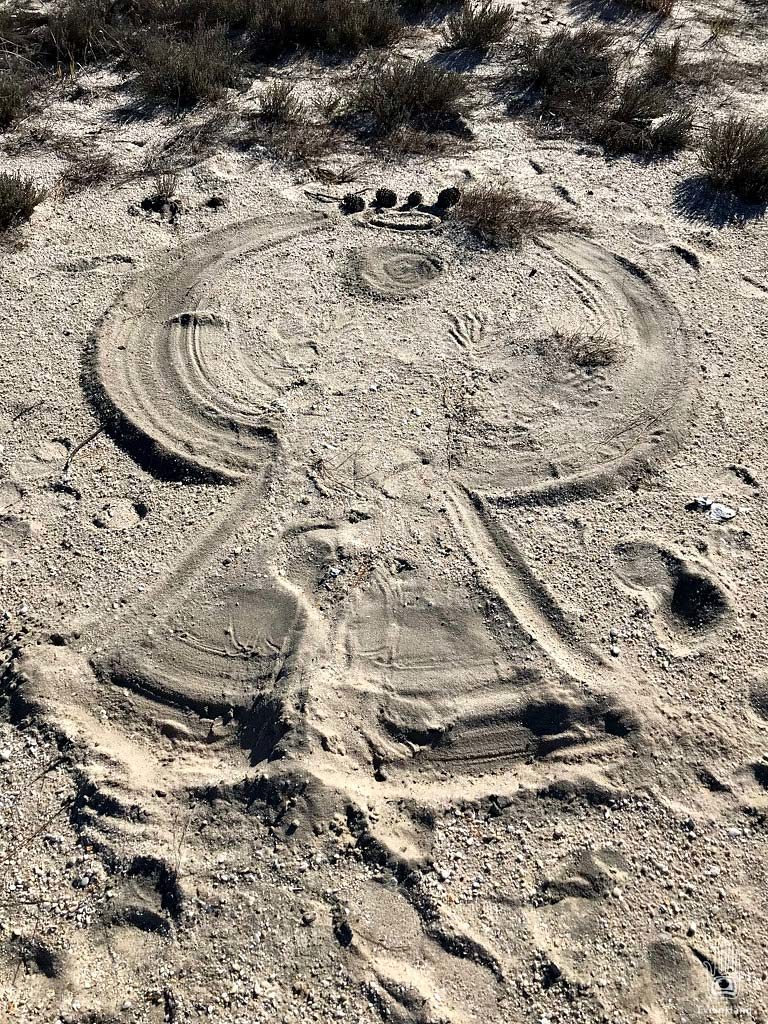 Gloria, a retired school teacher, offers encouragement to others, the most ephemeral of assets. Confidence is a coin whose value diminishes the moment it’s struck. She finds ways to slip change into everyone’s pocket.

One nice thing about having older friends is they have such good stories to tell. Tom likes to hear good stories. In a kind of performance art, he gathers disparate people into amenable arrangements, like pieces from different puzzles that fit together, then sits quietly and listens to the storytelling.

At the end of the week it will all be gone. Things temporarily collected are dispersed.. Shells go back to the beach. Footprints fill in. The wind blows. The waves change direction. The tide rises and falls. 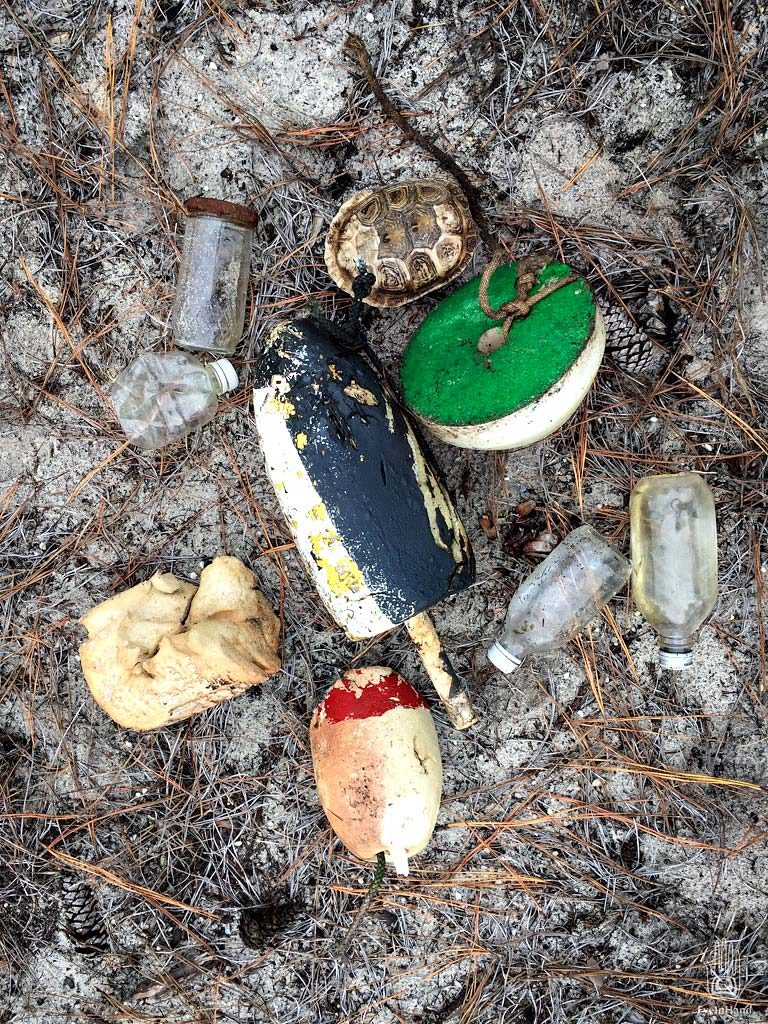