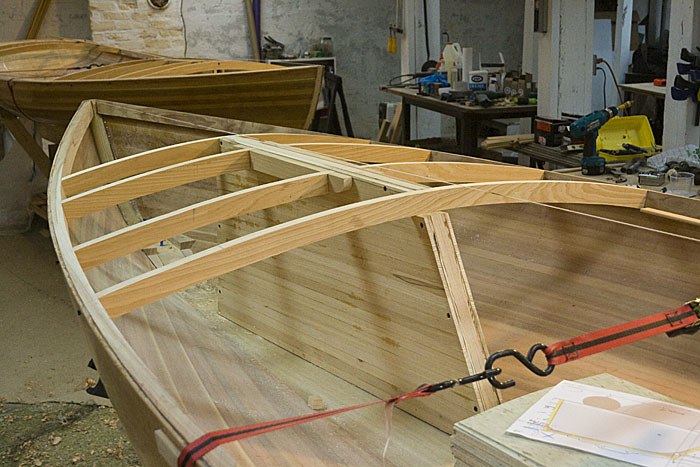 New Years Eve. No partying for us tonight – we’re packing for a trip to South Carolina in the morning, visiting family for a few days. The weather is only barely cooperating, with sleet and snow every night, warming enough afternoons to melt it off cars and roads.  We still have snow on the ground from before Christmas. Between that, and the fact that all four of us and three dogs will be making the 10 hour drive in one car together, it should be an interesting trip, to say the least.

Speaking of Christmas, enough gifts came to me in the form of donations to the Sail Fund that I may be able to order them finally. Thanks everybody!

Got a little done on framing over the holiday, enough to get the juices flowing again. Except for a few screws, everything is still dry fit, held in by friction only. Don’t want to cut those holes in the bottoms until I’m surely sure where it all goes. The exposed edges and corners with get rounded over with the router so they don’t catch on things and splinter. 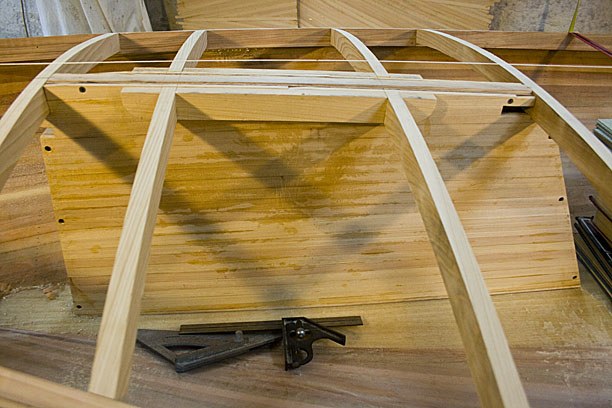 Still have to sand and glass the cases. You can see the slots fore and aft where the brass blocks will go to operate the boards. They’ll be covered by the deck and not visible from the cockpit. 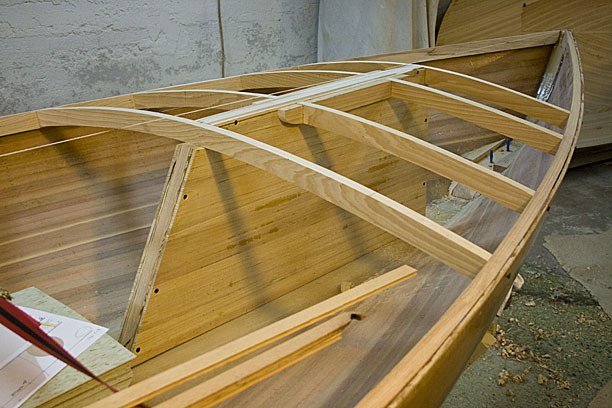 South Case from the front.

I’ll probably leave an access hole there to poke down a stubborn board. 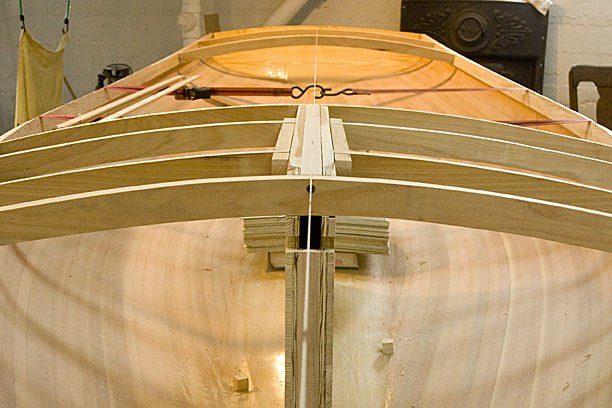 South Case view from the cockpit.

I laid everything out so there would be two complete uncut beams spanning the hulls at the front and back of the case, reasoning they would be stronger than butt joints. They’ll be glued and screwed to the cases. The two beams in between aren’t evenly spaced since they were cut to fall directly over station molds where I had a pattern to follow exactly for their shape. Mostly they just support the deck, and I probably could have eliminated one or both of them, given that the decks will be glassed inside and out. But it was easy to add them, they don’t weigh much or take up much room, so I’ll probably leave them in. The only other beam I could remove is one between the back of the cockpit and the transom. Again, I’ll probably leave that in too, as you frequently kneel, sit or stand on the rear deck to futz with the rudder and such.

With the cases running the full distance from cockpit to hatch, and all that framing in between, I’ve eliminated the kingplanks. You would need them in a daggerboard configuration, where the case extends less than two beams, but these long beefy cases are performing that function here.

I’ll continue moving forward, finishing the hatch frames and mast partners before working back into the cockpits. Not sure yet if I’ll put kingplanks under the rear decks; don’t think I’ll need them unless I get a poor bond between the deck and beams.