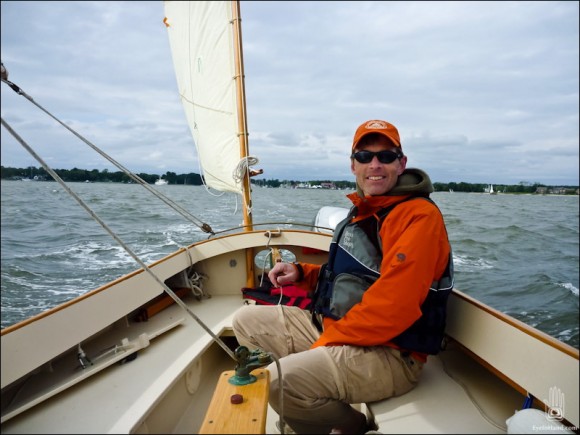 Kevin Brennan built his Navigator Slip Jig in 2007, and I’ve been trying to get a sail on her for years. Kevin has built five boats now, including a beautiful traditional Chesapeake Crabbing Skiff I’ve always admired. He sold that boat to build the Navigator, and the new owner always brings her to the festival. I’ve photographed this boat many times over the years, but only recently learned that Kevin built her, too.

Kevin does custom furniture work on the side, and he applied all that skill and experience when building Slip Jig. Like me, he comes to the festival in St. Michaels every year, but he always has a boat with him, and loves to sail, so it’s hard to catch him ashore. We finally got our timing right this time.

Overnight, the peace and tranquility (and warmth) of Friday gave way to a fast moving cold front that, by morning, was charging through like a freight train, and that’s when we pushed off the docks and headed out.

According to a gauge on Tilghman Island, winds were blowing 20 gusting to 30mph, and it felt like it. Nothing this boat couldn’t handle – I had filmed it sailing in much the same conditions last year from Tony Thatcher’s boat – and Kevin knows his boat well.

It wasn’t too bad in the lee of the land, so we started out with full sail up. We sailed along with a rail in the water, both of us hanging off the side, for several long tacks across the river. The wind continued to build, though, and a reef seemed like a good idea, just to keep things a little civilized. This video was shot after we tied in the reef: 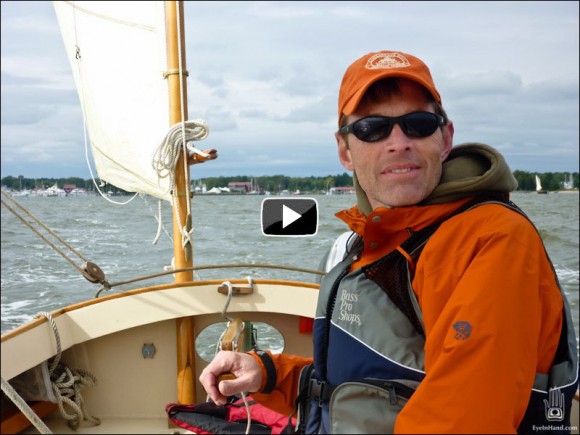 Later that day, Kevin coerced a few other people to climb aboard and hold the boat upright so he could sail her in the race. I watched from the safety of one of the chase boats, and I don’t know what it was like aboard Slip Jig, but I know he did quite well.

Thanks for the great sail, Kevin. See you again soon.