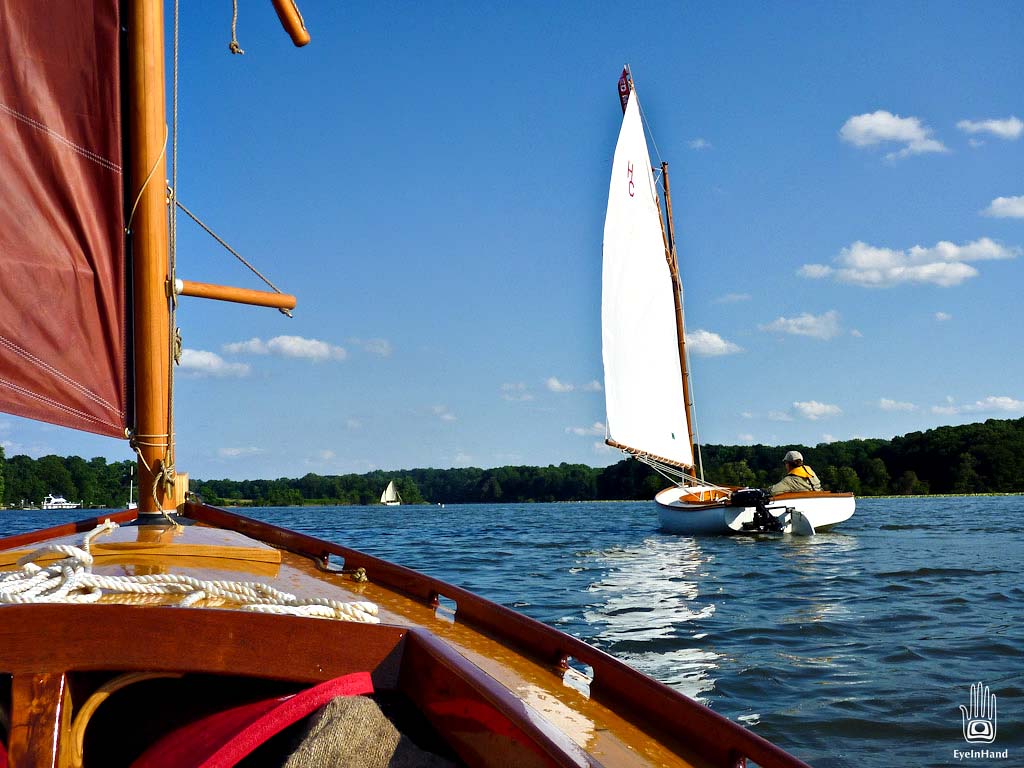 Easing in at end of day.

There’s video from this trip still to come.  I’ll try to get that up in the next day or so. Still trying to catch up from 10 days of travel.

Kevin Brennan spent a long time researching a good launch point for this trip, and really nailed it with Turner’s Creek. The ramp is wide and well maintained, in a sheltered cove, with good parking and necessary facilities at hand. It’s also secluded and quiet, with very little traffic other than watermen and a few locals.

But the youth fishing tournament put an unexpected kink in those plans, and we had to improvise. The next best option was Betterton a few miles down river. It was decidedly not better, not by a ton, but it was the best we could do.

Carpy Ramp, scouting the day before.

In preparation, I did a little recon the evening before, snapped a photo of the small, exposed, ill-maintained ramp and sent it to Kevin. His response, “Looks pretty carpy!” A three foot dead one to be precise. It’s good to have a sense of humor.

By the time Doug Oeller and I arrived the next morning, someone had moved the carp. A marked improvement. But the entrance was still narrow, choked by a rock revetment on one side and power boat docks on the other. And there was a stiff headwind with a long fetch blowing right down the gullet. Once all were launched, the folks with motors towed the purists ignominiously out to open water and we were away. 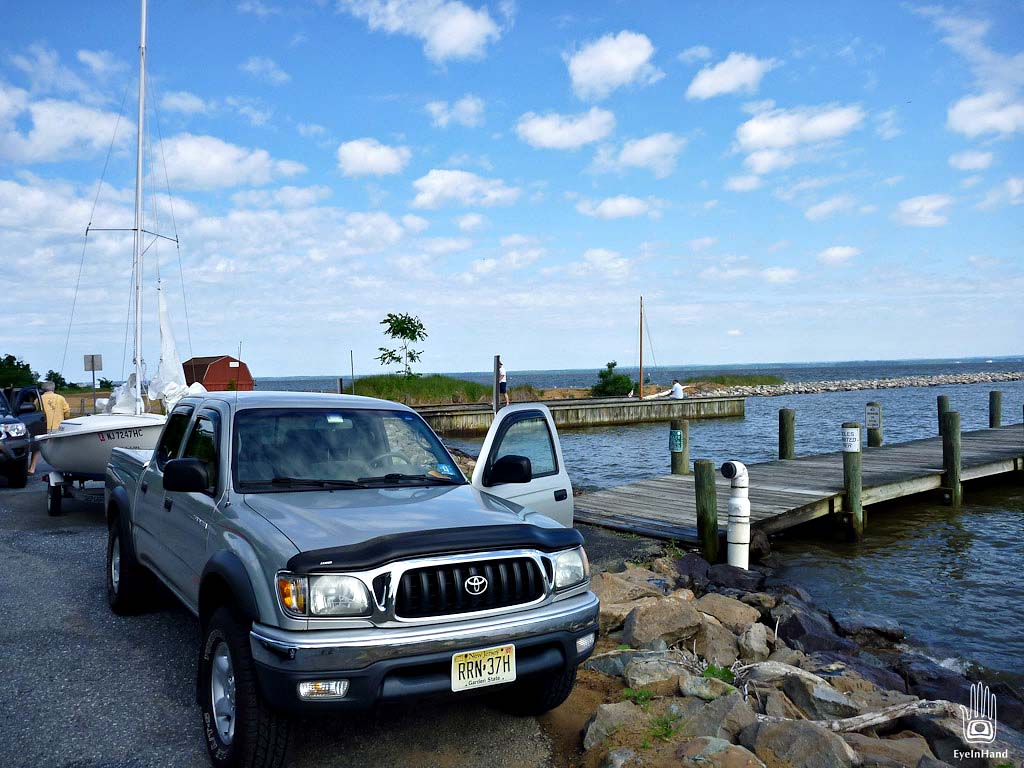 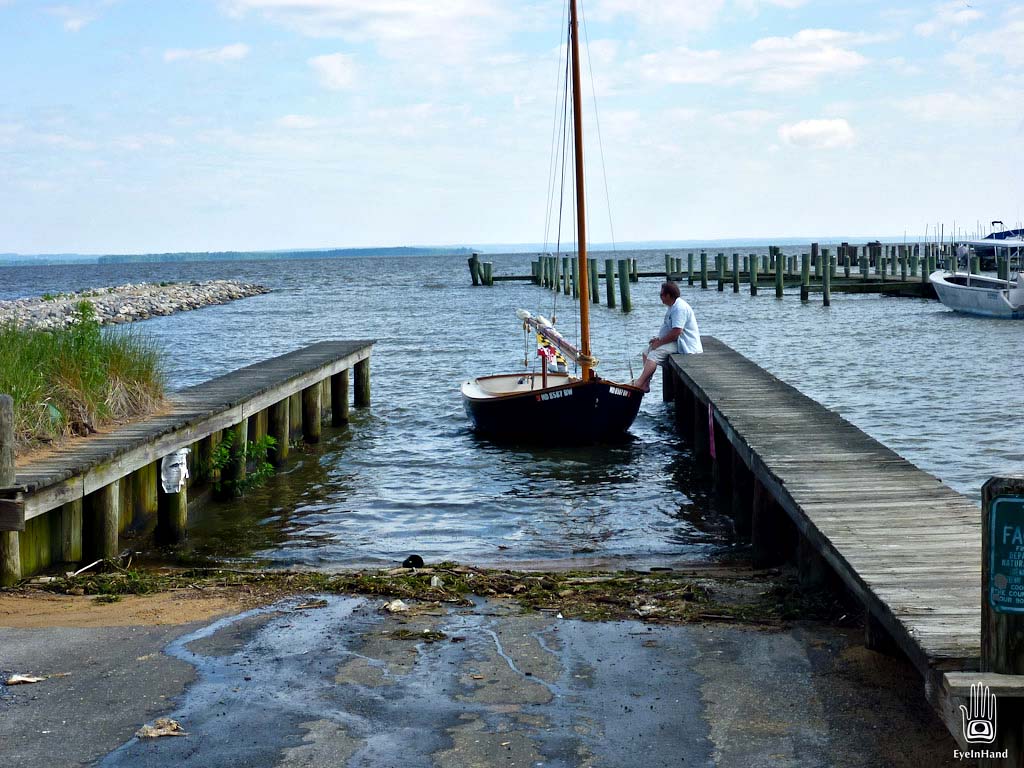 Once in the open, I was surprised how large the chop was with the whole width of the Bay to build up steam. The moment I cast off the tow line a green wave came over Caesura’s bow. Surprise and instant consternation. Foolishly, I had stuffed all the gear far up under the foredeck, including 3 heavy gallons of water in the point of the bow. The combination of too much weight forward and no sail power must have conspired to teach me a lesson. I quickly sheeted in and turned downwind, resolving to stop at the nearest beach to rearrange.

In no time, a very pleasant sand spit appeared on the south shore, one I remembered seeing on the map. Rounding up and looking back, the rest of the pack was two miles behind. Dang. Caesura had averaged 4.5 knots running downwind, against an outgoing tide. The other boats were still tacking near the ramp, probably waiting until someone got situated. We intended to stay in visual contact if at all possible, so I dragged Caesura up on the beach and waited. 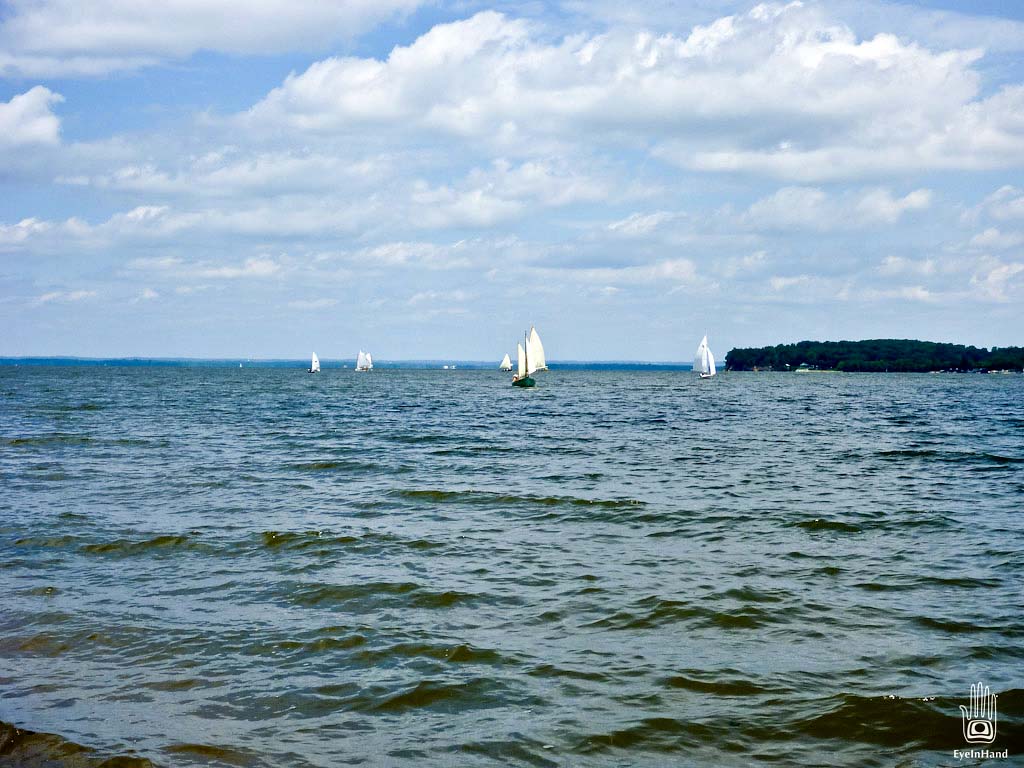 This long, slender sand spit separates the main part of the river from a big shallow creek, almost a mile wide itself. It was a good place to gather for lunch, and made it easy to film the other boats coming in for a landing. 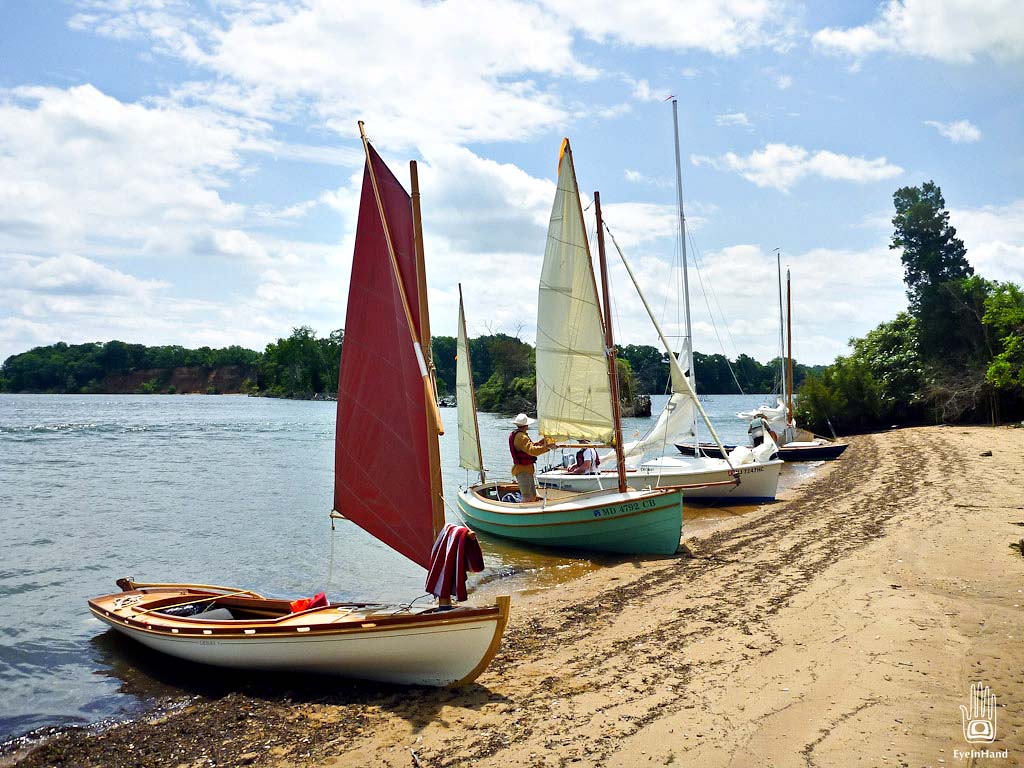 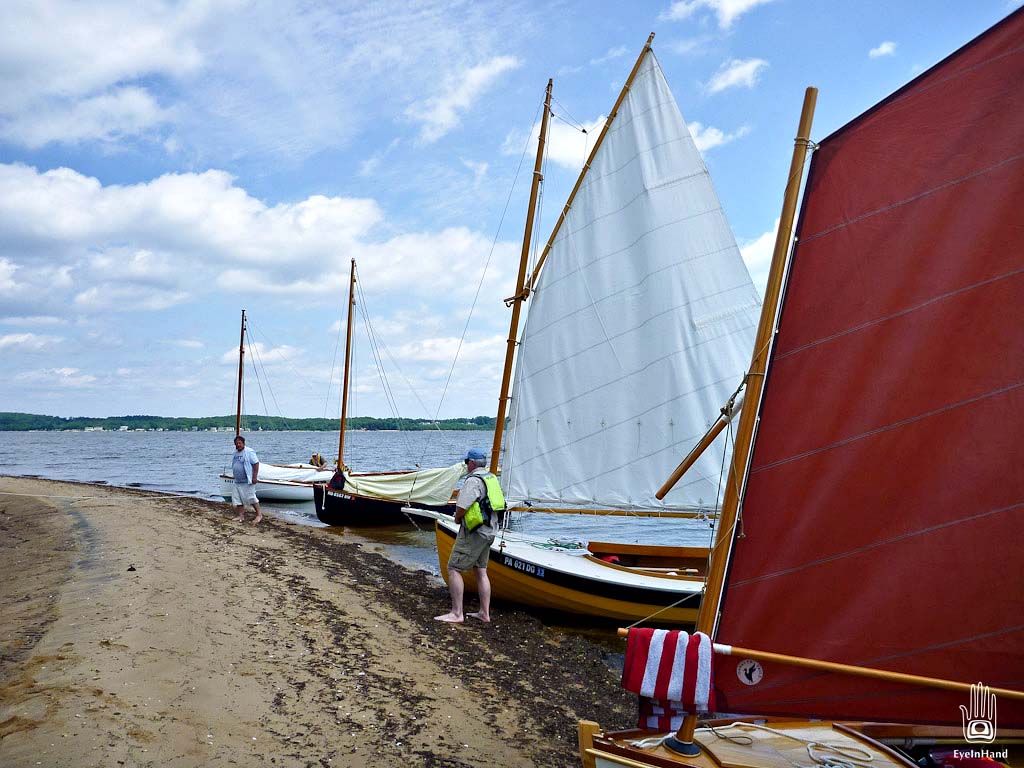 The tide continued to ebb during the hour or so break, and Caesura was high on the sand when it was time to head out again. We dragged her off, then everyone raised sail and we headed for open water again. I was one of the last to leave, and it was quickly apparent Caesura’s centerboard was stuck. I turned and managed to catch the bitter end of the sand bar. Between an hour of waves splashing grit up into the case, and dragging her off the beach, enough sand and gravel got packed in around the board to jam it up tight.

Kevin spotted the about face and turned back to give me a hand. We unloaded and flipped the boat, then used a hunk of driftwood for a mallet on the bronze rudder rod to hammer it loose. I intentionally left the forward pulley fitting on the centerboard case loose and removable just for this purpose, and glad I did. Then we washed out the case with Kevin’s bilge pump. Nice to have an extra set of hands for this. Finally loaded up and were away again.

Next time I’ll either anchor off the beach, or pull the boat up onto something to keep it clear. Two lessons in one leg of the trip. Nice.

School was over, and the rest of the afternoon was blissful and uneventful. Behind the first bend of the river the water flattened out nicely in the lee of the land without blocking the breeze. The next several hours were really pleasant sailing, reaching back and forth in close quarters or exploring the shoreline. We rode a gentle tail wind deep down Turner’s Creek to scope out the anchorage, but no one wanted to stop, so tacked back out again and sailed some more. 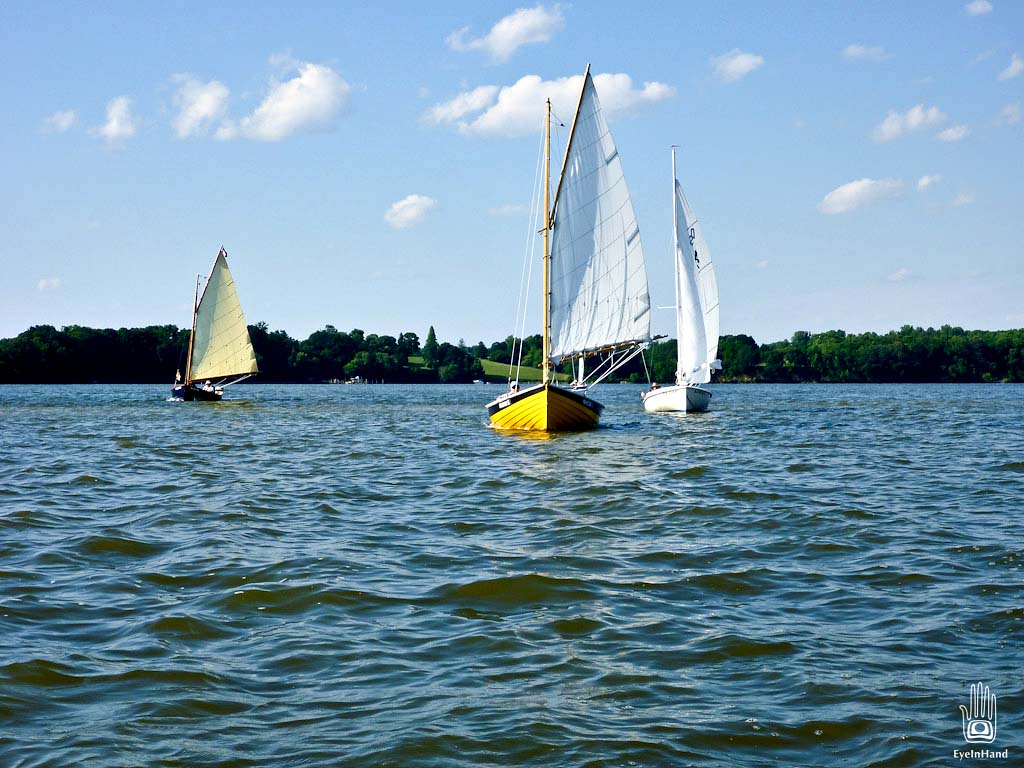 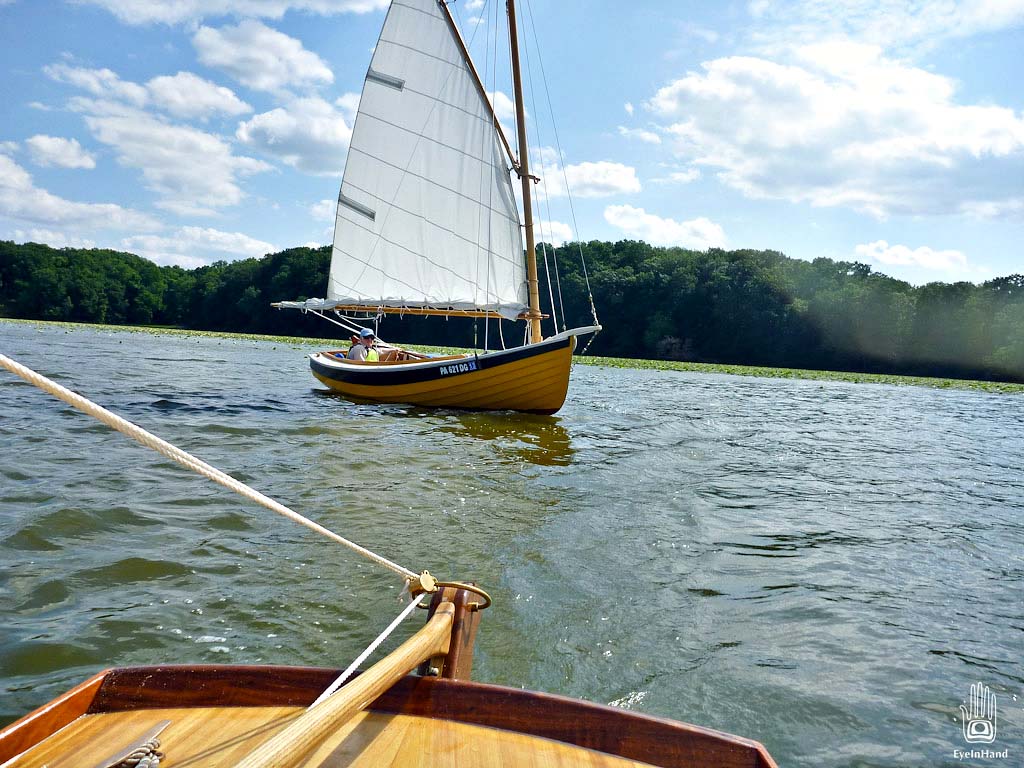 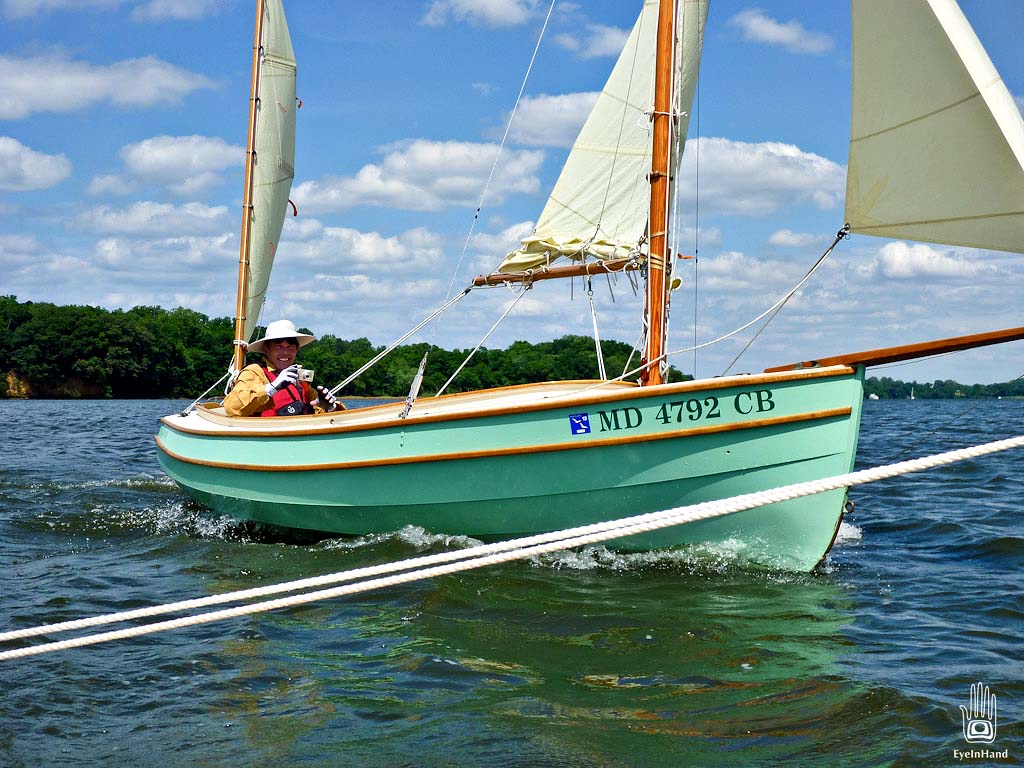 When the sun started looking low, we finally conceded and headed back into the creek. Kevin found an open mooring, and the rest of us rafted up alongside. We shared food and drink, stories and music. Eagles flew overhead and a full moon rose over the lotus field. A whippoorwill called from shore. Not a bad way to spend an evening. 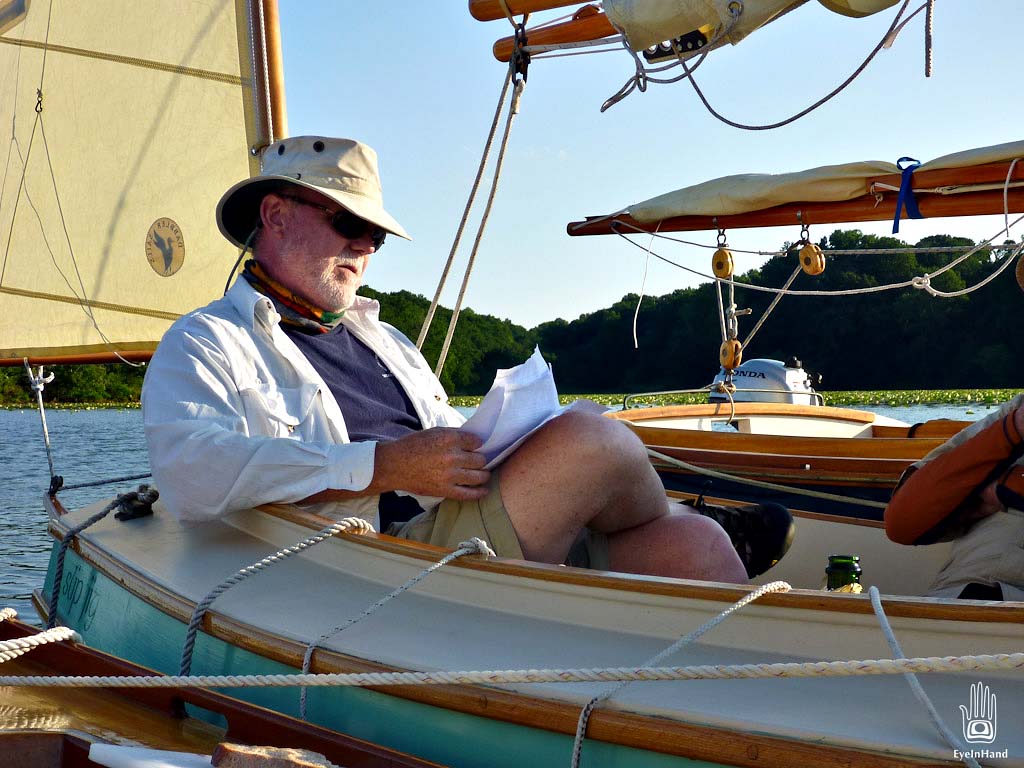 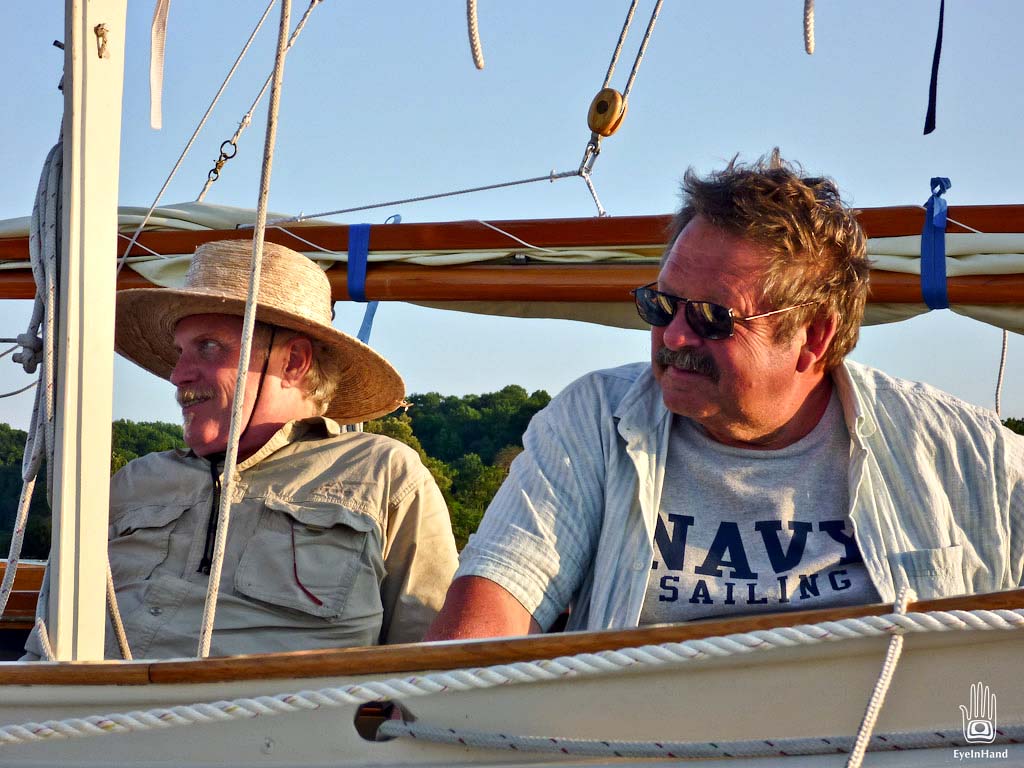 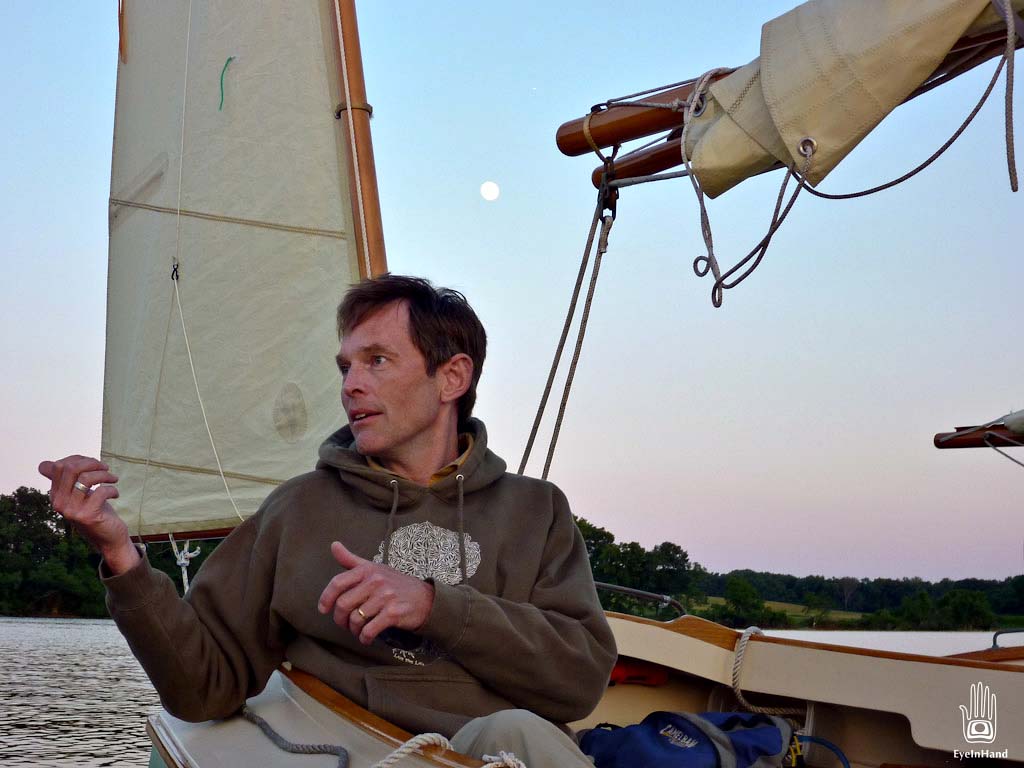 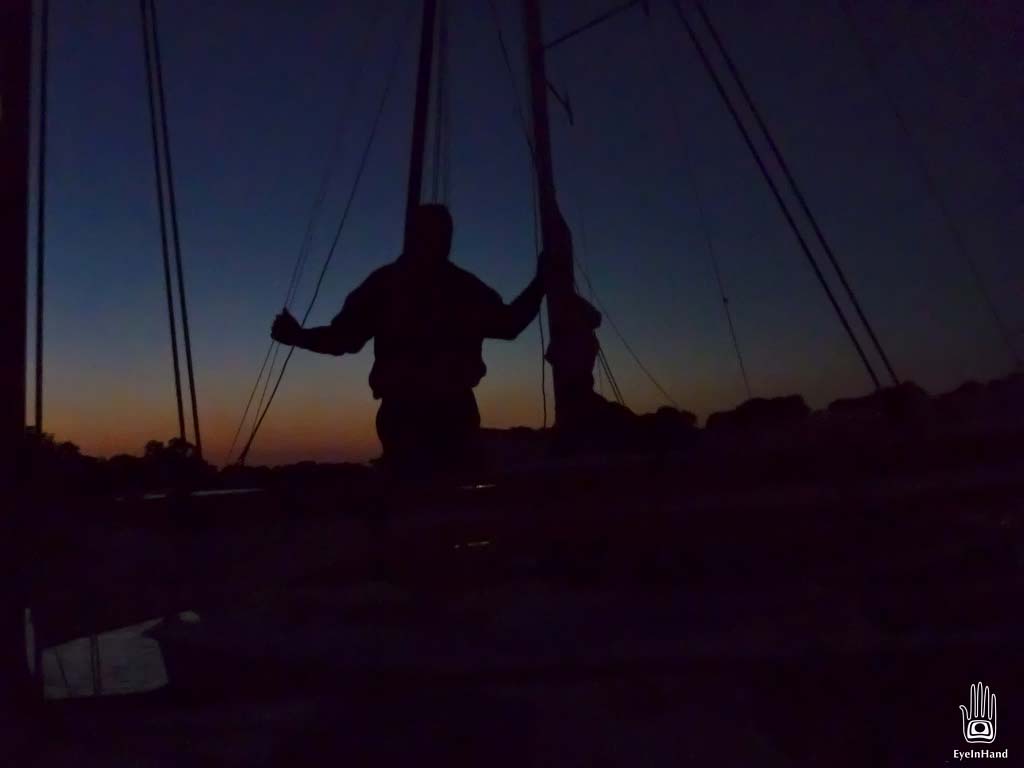 The next morning, before the coffee got cold the wind picked up a bit, still blowing straight up the river. It would be a long slog back to the ramp.

I needed to get home at a decent hour, since we were leaving the next morning for South Carolina, so started back after breakfast while the other guys went further upriver. The wind was blowing against a fresh outgoing tide, pushing up a steep chop in the channel. Combined with gusts over 20 knots, conditions were a bit more than I was comfortable with yet. I ran back into the mouth of the creek and waited for the tide to slack some. Within an hour the waves eased considerably. Though still challenging, it was no longer fearsome. 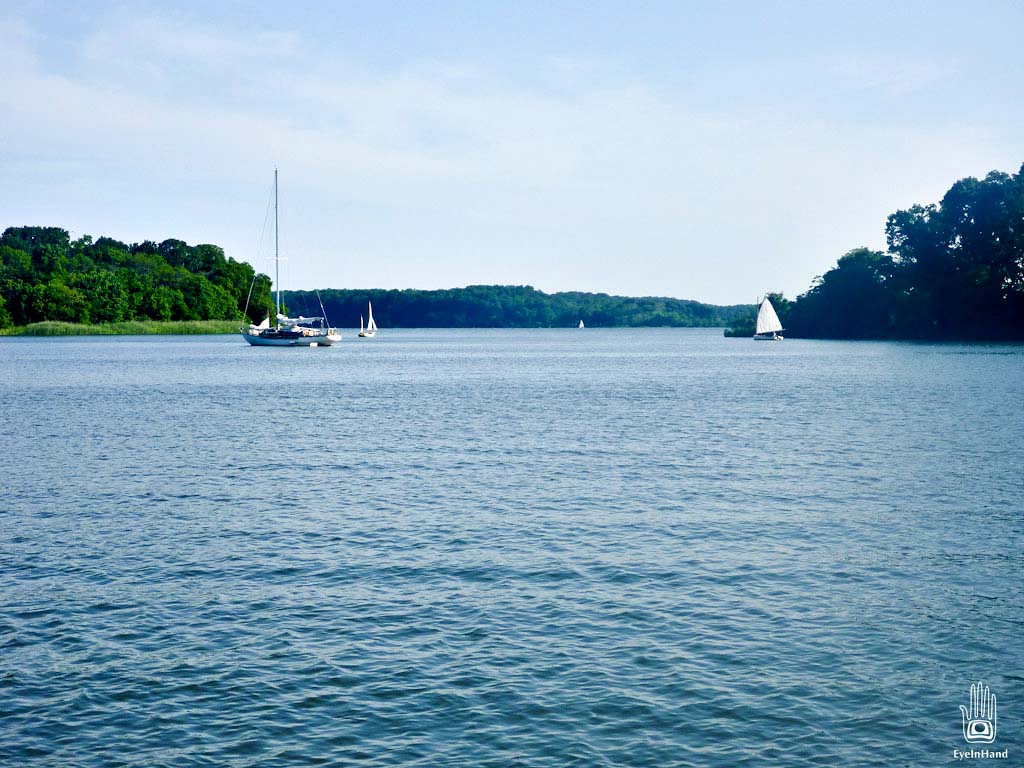 Aside from the occasional monster yacht wake and nude sunbather, there’s little to report. It was nice to have such a long time to practice beating and tacking, learning where all the edges are. I never had another wave come over the bow. Whatever it was yesterday – the load up front or drifting into the waves – i was glad it didn’t return. In fact, despite beating into the chop for hours, I never got more than a few splashes in the boat. Big relief.

It’s a four mile stretch from the bend in the river to the ramp. Well, in a straight line. When I was about half way there I looked back and saw Kevin’s Navigator just making the turn. For a while the distance between us seemed consistent, but before long he started gaining on me, fast. He managed to catch me before I reached the ramp.

When sailing to windward, its the leading edge of a sail that provides the lift. That’s why square rigged sails were eventually replaced by the now ubiquitous triangular Marconi rigs. Through a steady evolution of sail types, tall and skinny replaced short and squat. There are all sorts of factors that come into play when two boats are sailing against each other, not the least of which is boat length and hull shape, but in certain conditions sail shape alone makes the outcome relatively predictable. Kevin’s Navigator has three sails, all triangular with long leading edges. Probably four times as much edge as my little squarish sprit sail. Other catboats in our bunch also have squarish gaff rigged sails. I was able to keep pace with them, but not the Navigator. At least not upwind.

So far, I can’t seem to sail closer than about 55 degrees off the wind in rough water, and likely won’t be able to improve that much without changing the sail – I can sail closer in calm water, but not with enough speed in rough conditions to punch through oncoming waves. Kevin is probably getting closer to 40. It makes a big difference. A boat sailing 40 degrees off the wind versus 60 will go 50% farther with every tack. Still, progress is steady and predictable.With this sail I have no need to reef. Works as well at 5 knots as it does at 25 without changing a thing. And I don’t have to mess with a jib sheet each time I tack.

Caesura traveled 39.4 miles over the two days of sailing. You can see the tacks in the zigzag pattern of the GPS track. They vary some with changes in wind direction and current, but are fairly consistent. Next time I’m out for any length of time, I’ll try and tighten the outhaul on the sail and see if I can improve that slightly.

More photos, these from Doug Oeller:

And these from Kevin Brennan: 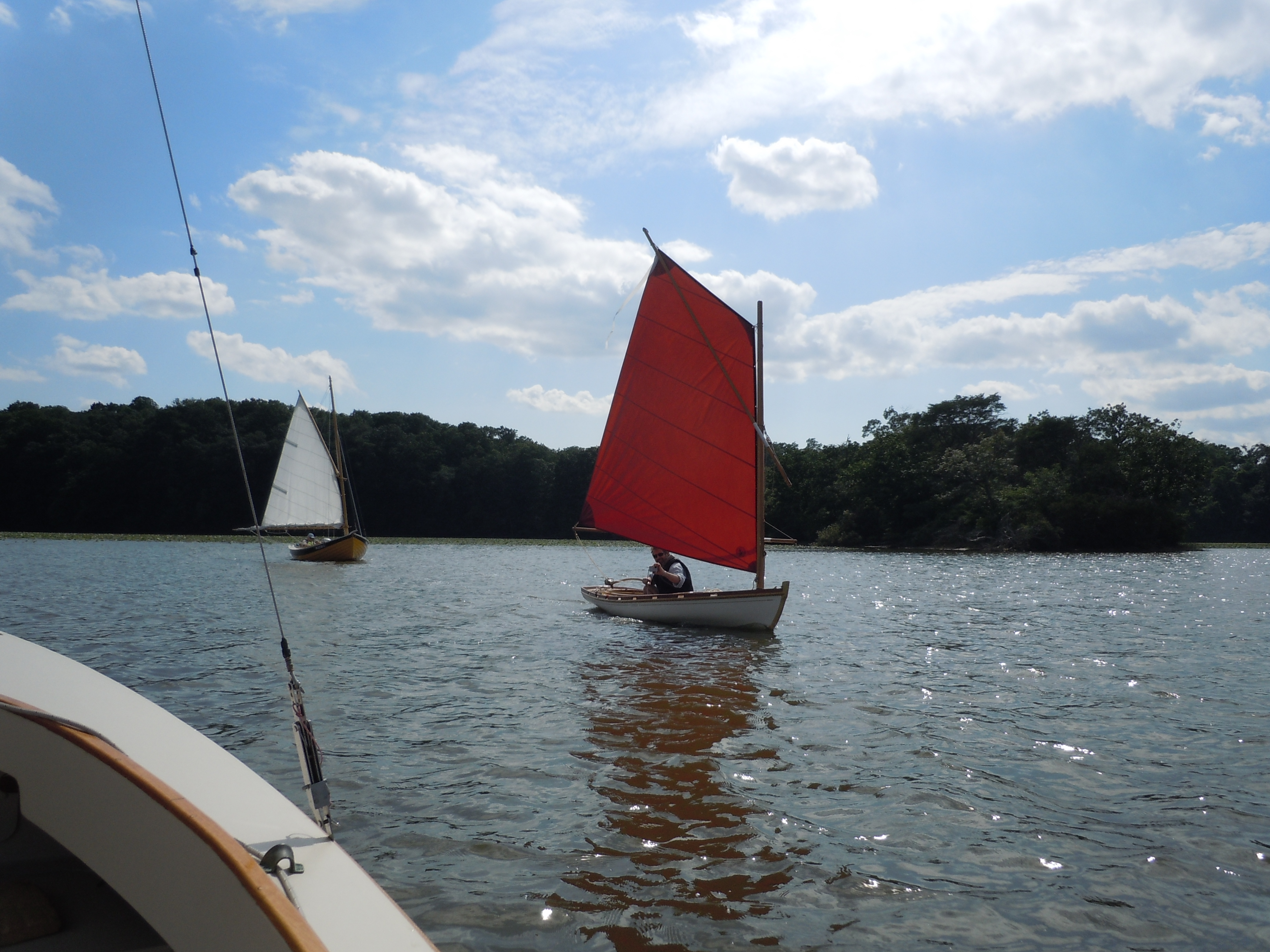 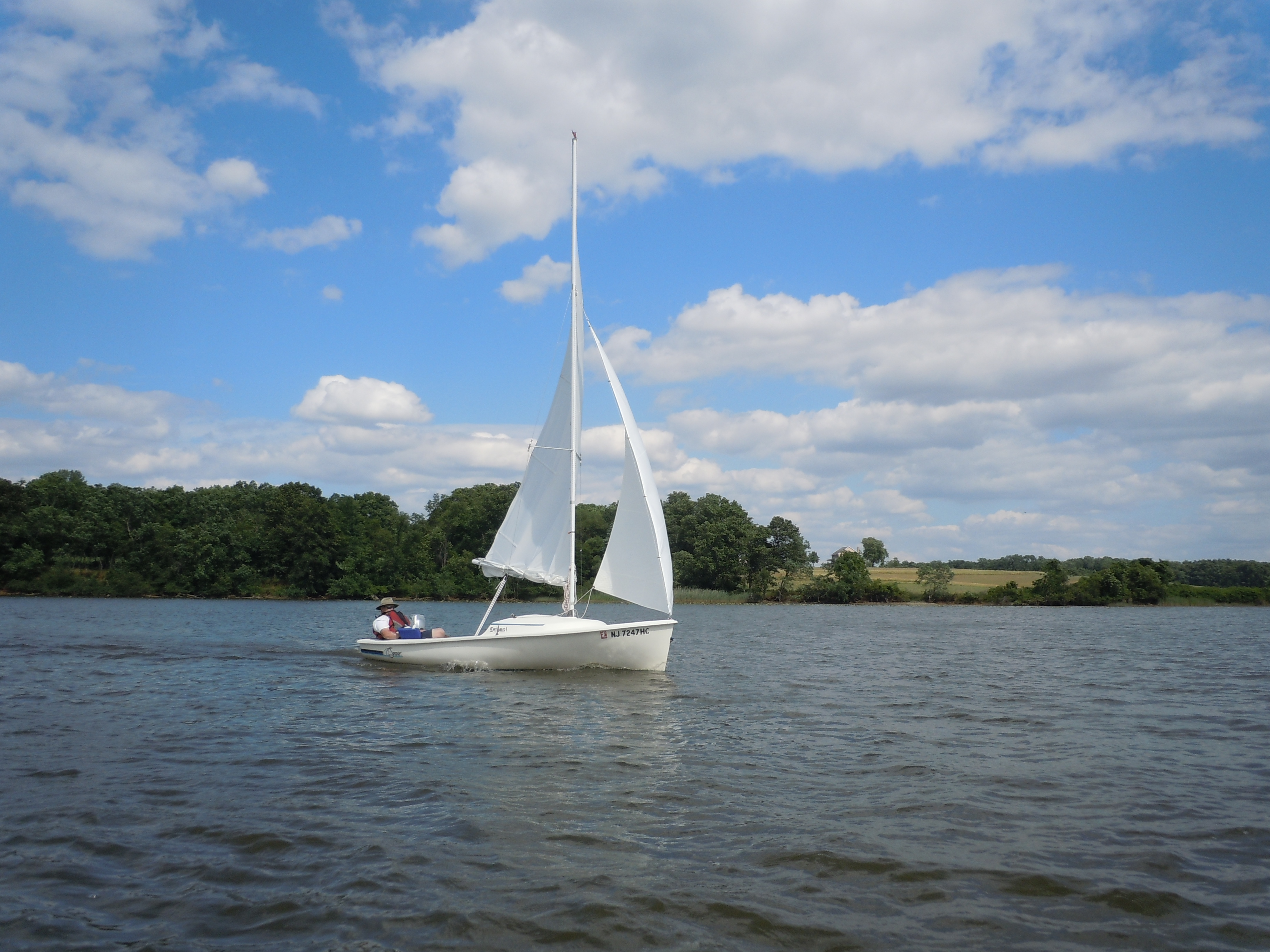 9 Replies to “Sailing the Sassafras”