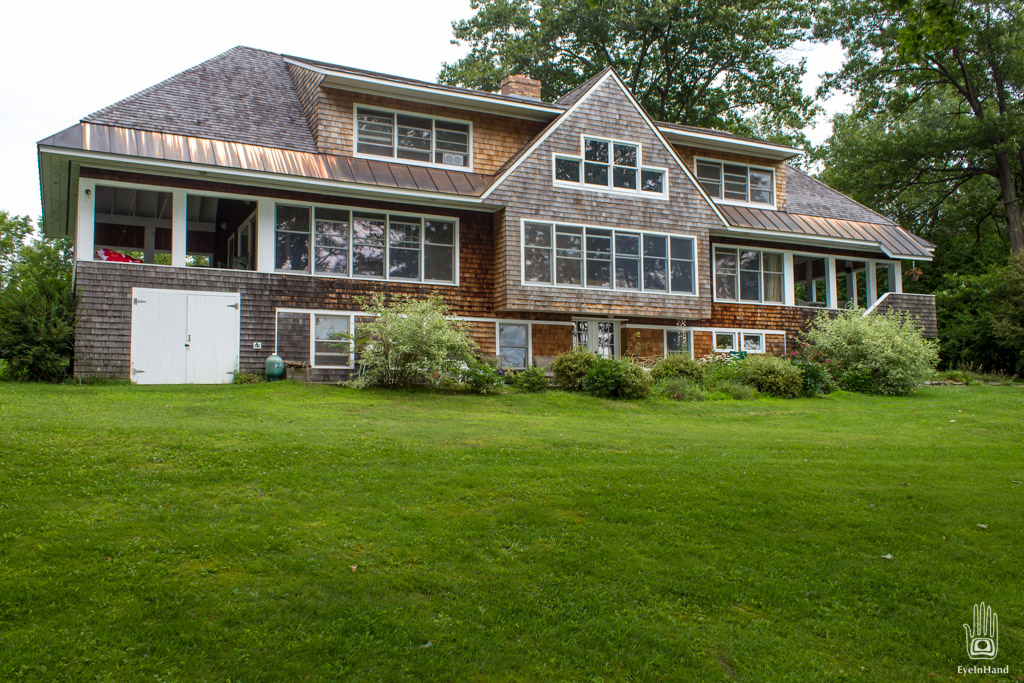 What you give up with airbnb is the comfort of predictability. There will be no desk clerk paid to wait for your arrival, no bellhop to take your bags, no beige carpet or generic art on the walls identical to that in 200 other identical rooms. What you gain is the unexpected. You typically stay in people’s private homes, with no formal checkin process, with hosts who have a natural interest in meeting other people. That was certainly our experience. 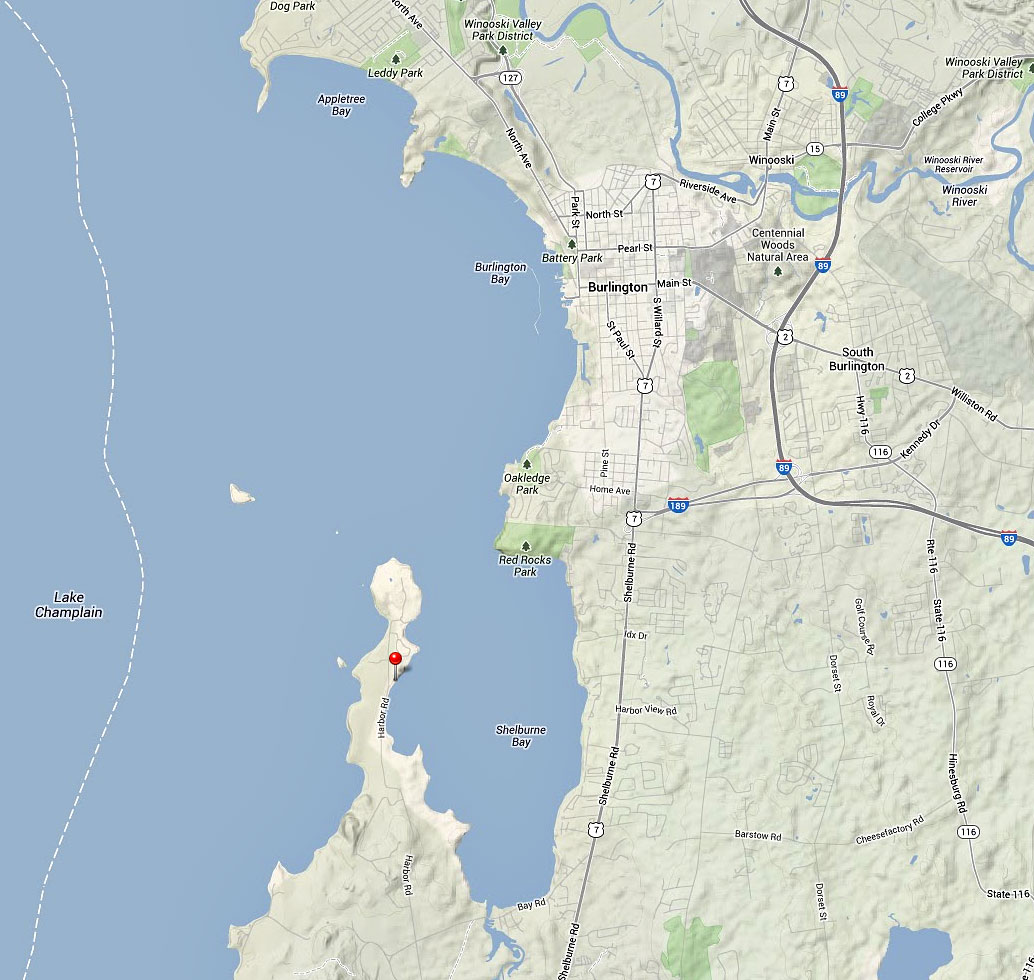 Shelburne, on a peninsula south of Burlington.

When we arrived at the house in Shelburne there was no one home. The doors and windows were open, with a breeze blowing in off the lake. On the porch overlooking the water, we found the remains of breakfast and a cold cup of coffee, a novel open on the table where someone left off reading, a portable phone. Someone was just here. I texted Nelleke, the owner, who apologized and said she was minutes away, to make ourselves at home. The house was lovely, on a bluff above the water, tall trees lining the shore. Sailboats anchored out front rocked in the waves, and others heeled over under reefed sails bearing north and south. 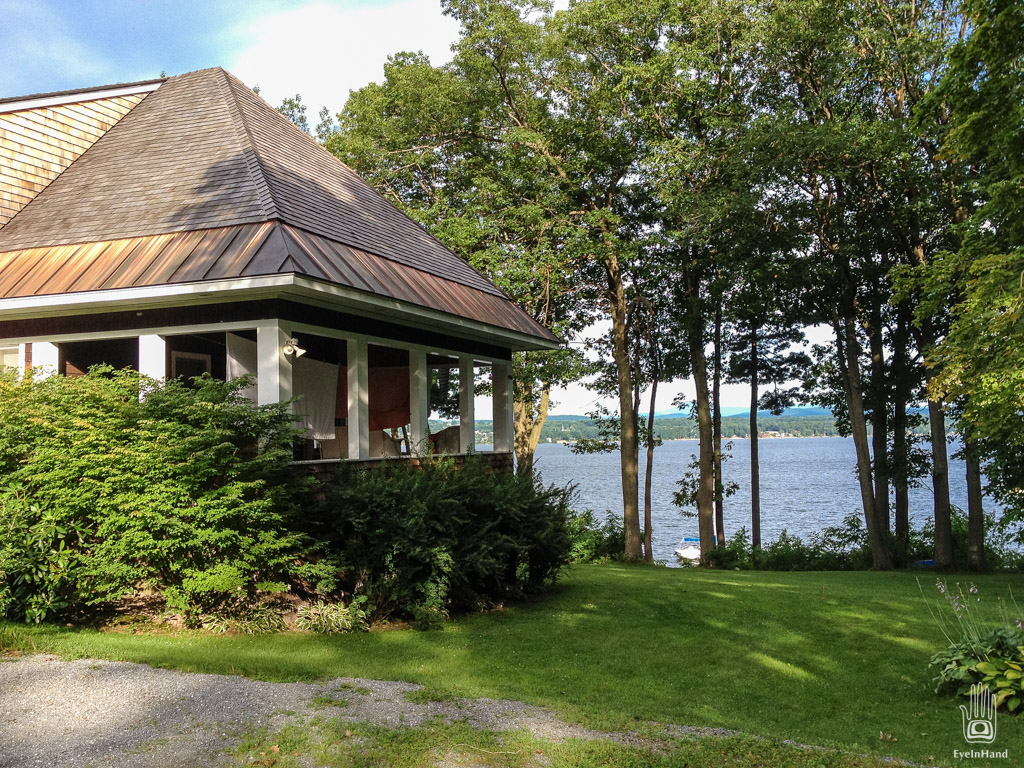 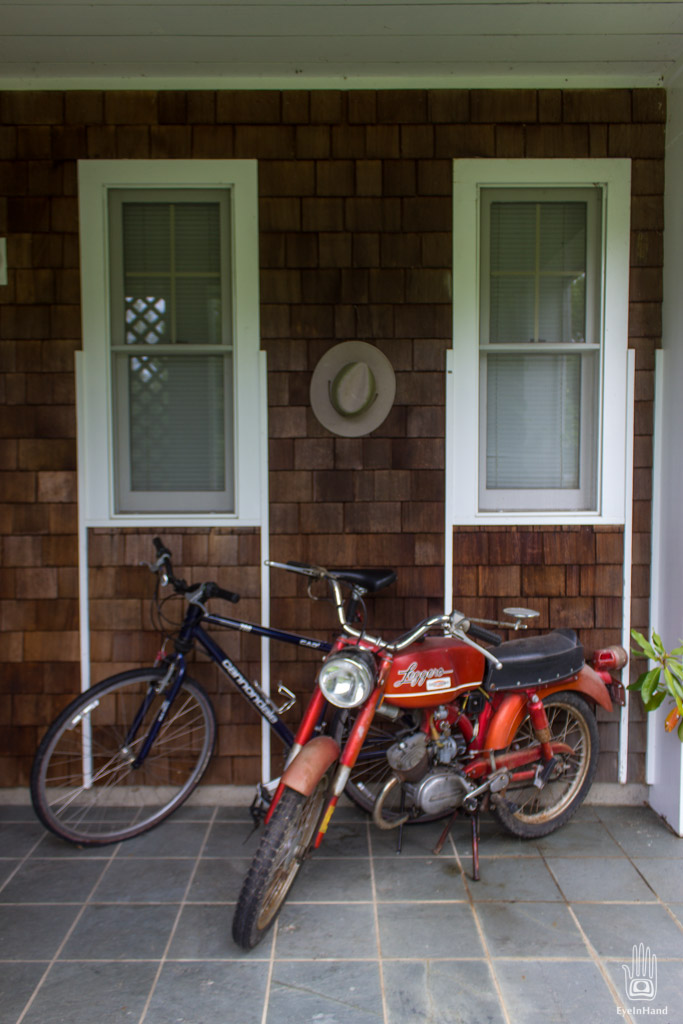 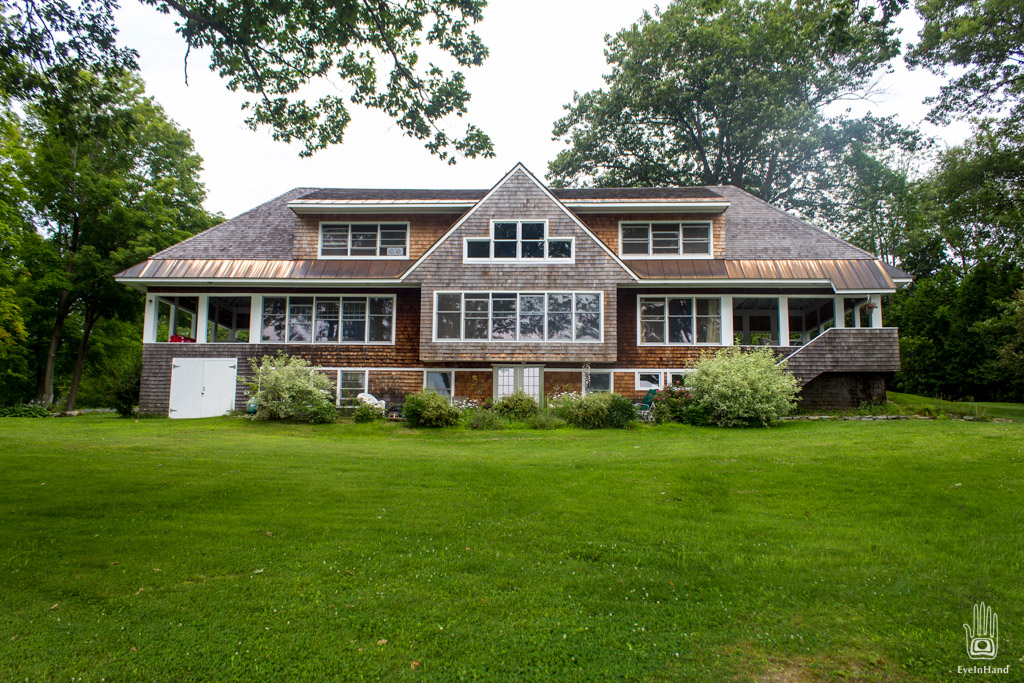 view from the room

When Nelleke arrived we tucked our bags into an airy upstairs room overlooking the lake. She suggested we take a quick tour of Shelburne Farms before it got too late, something on Terri’s list of things to do. Nelleke’s daughters had grown up playing in the fields and woods of the estate, a playground of nearly 4000 acres just across the road from the house.

Shelburne Farms is now a non-profit education center for sustainable farming, and they make great cheddar cheese; but it began as the opulent estate of a Gilded Age railroad baron, a member of the Vanderbilt family, the same Vanderbilts of Biltmore House in Asheville, the largest private “home” in the US.

We left the car at the farm store and walked a half mile across the fields to find the barn, ostensibly to buy a loaf of bread (there’s a bakery inside). What we found, as we emerged from a copse of trees, was not at all what I expected. To call it a barn is ludicrous – it’s as big and ornate as a medieval castle. 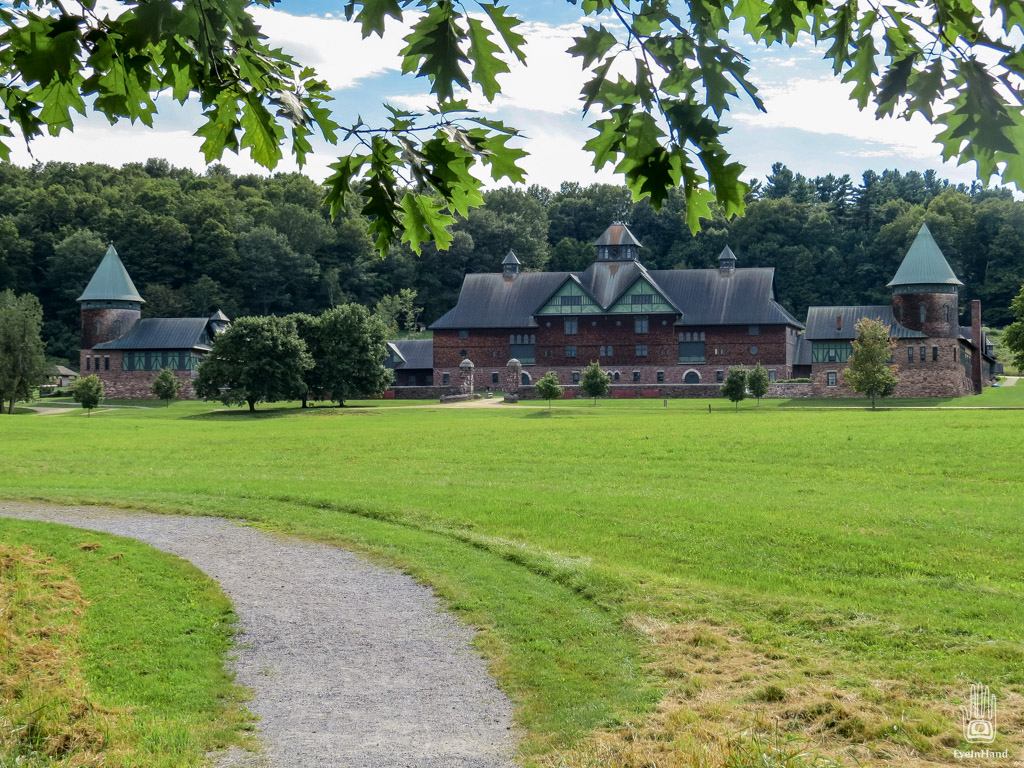 the end of one wing 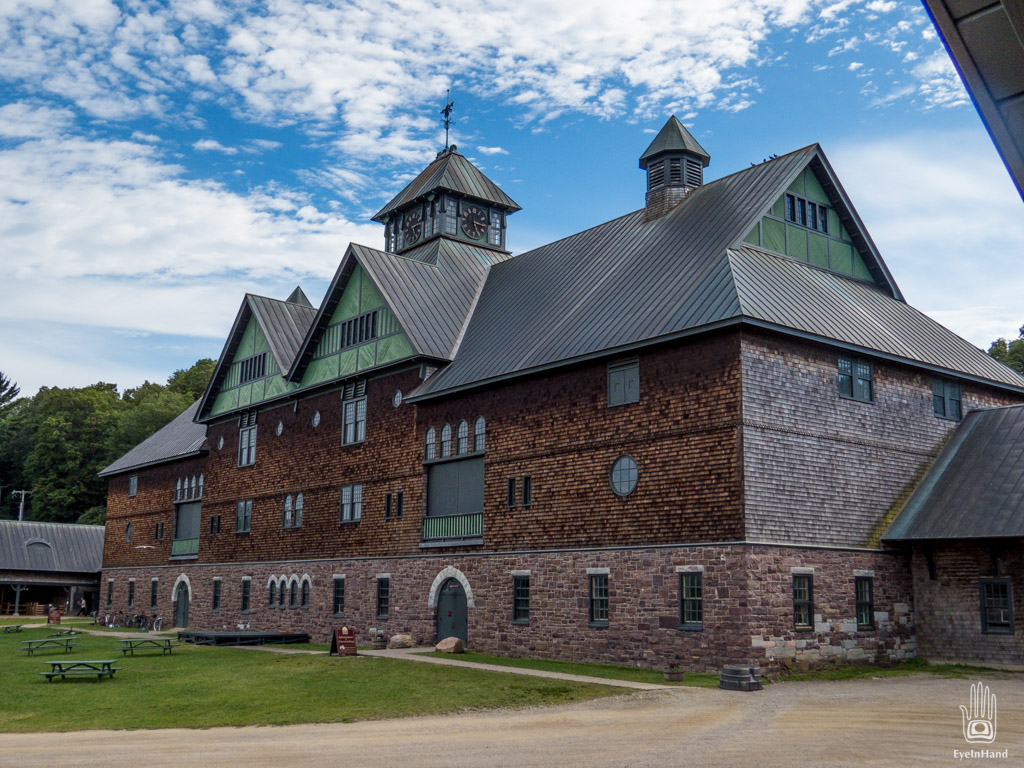 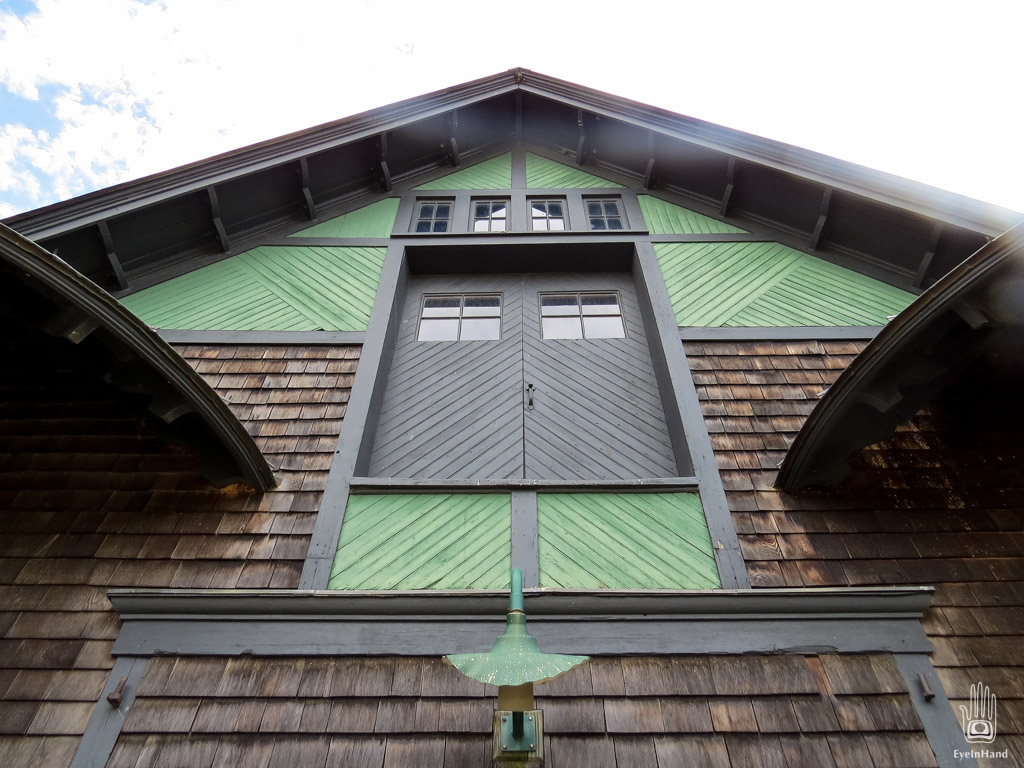 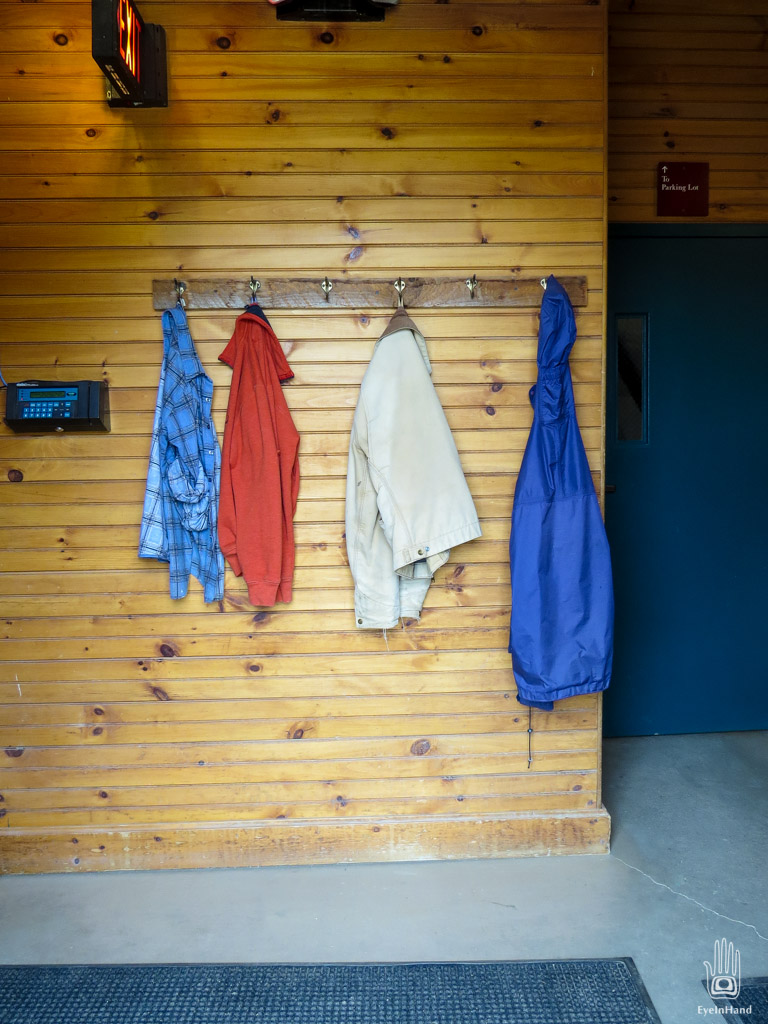 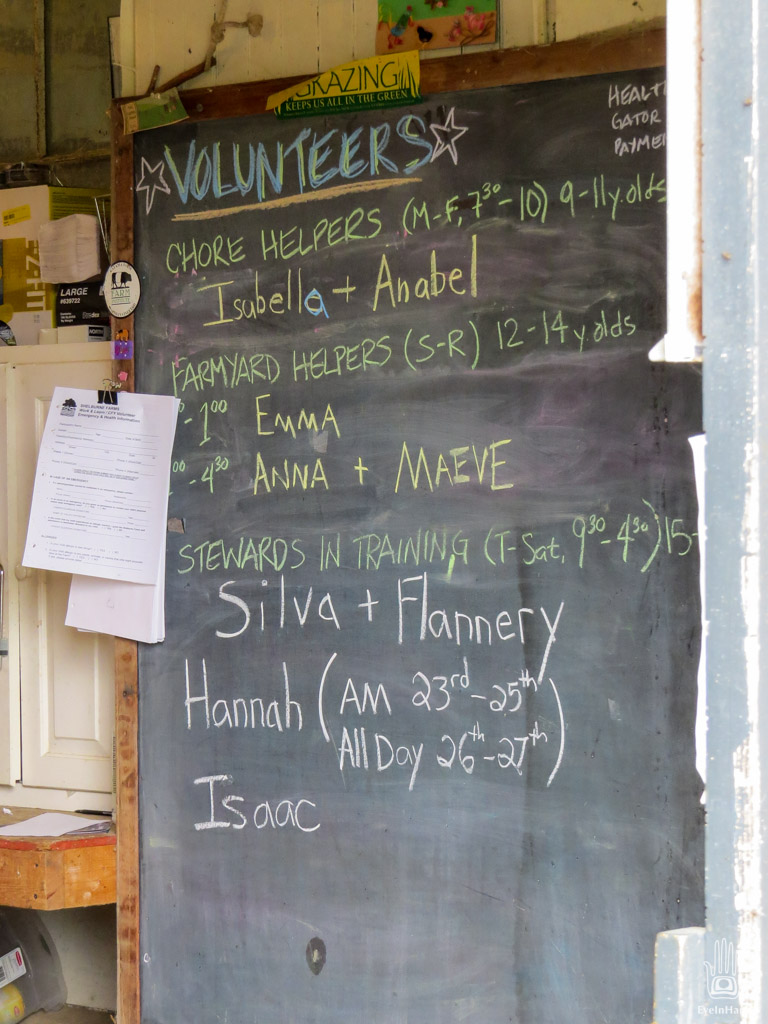 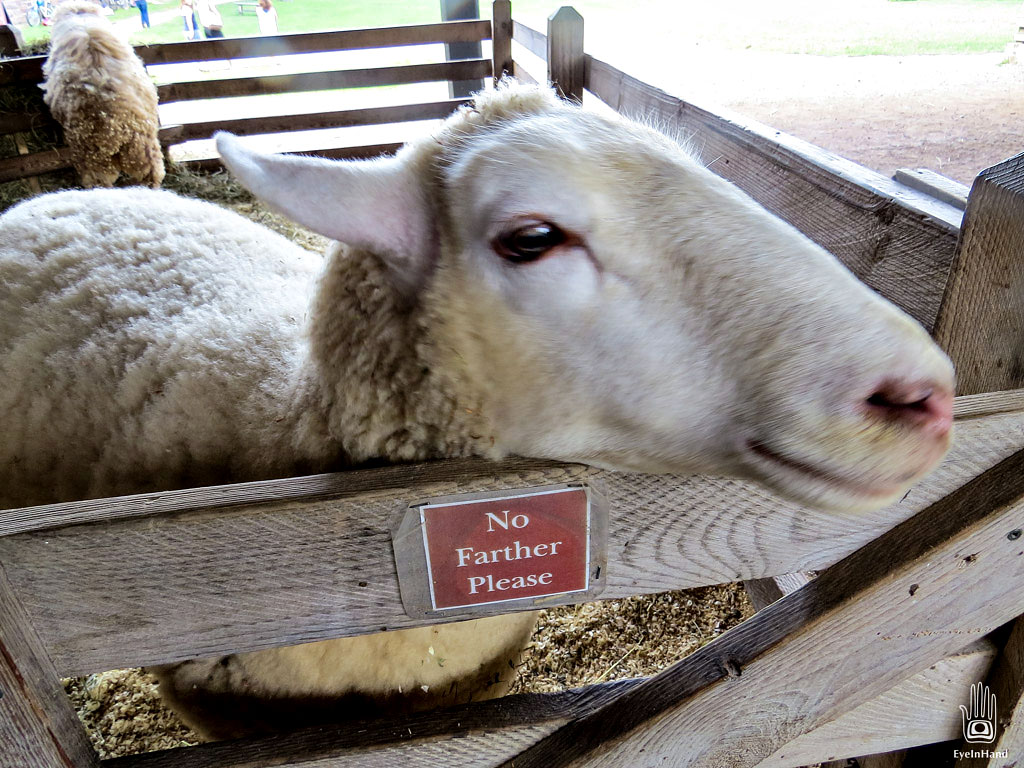 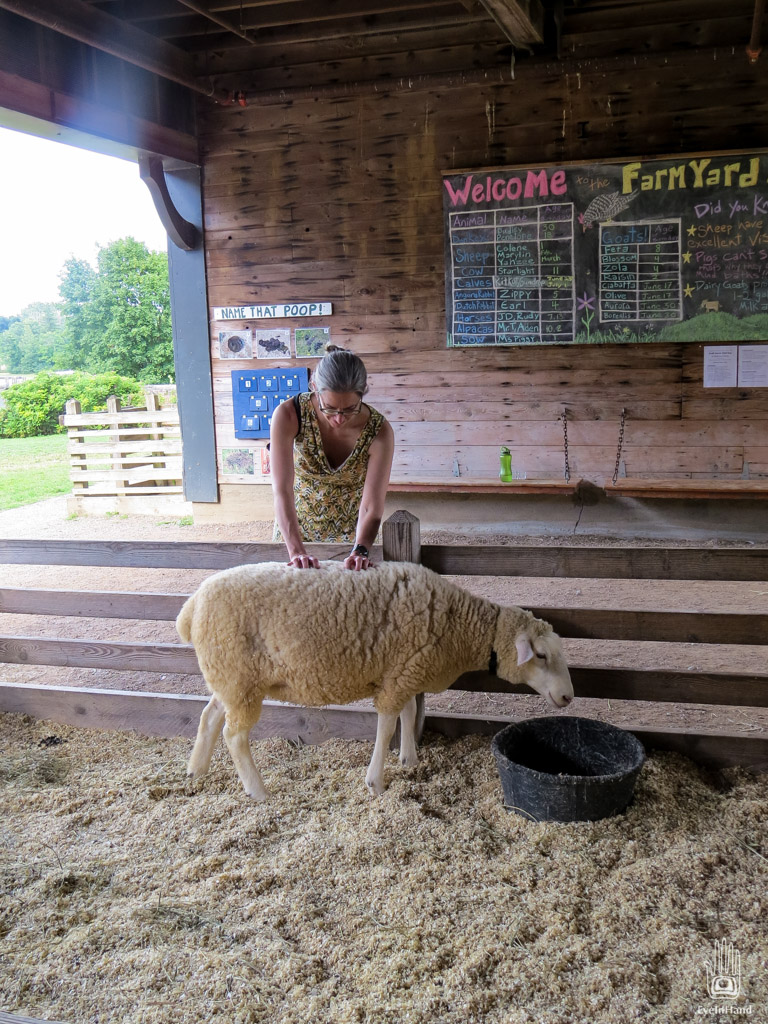 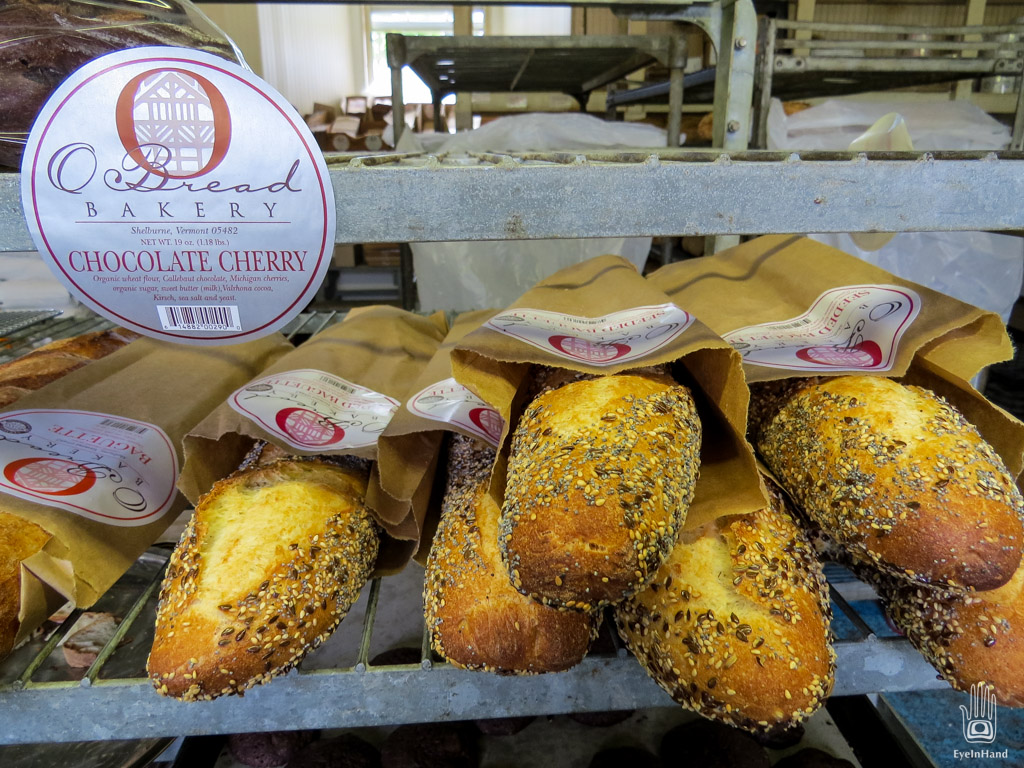 Past the barn – over more hills and fields and forests, way out on the edge of the peninsula, with sunset views across the lake to the mountains beyond – is the former estate house, now an elegant inn. It, too, is enormous and rambling, but oddly for its size has only 24 guest rooms. 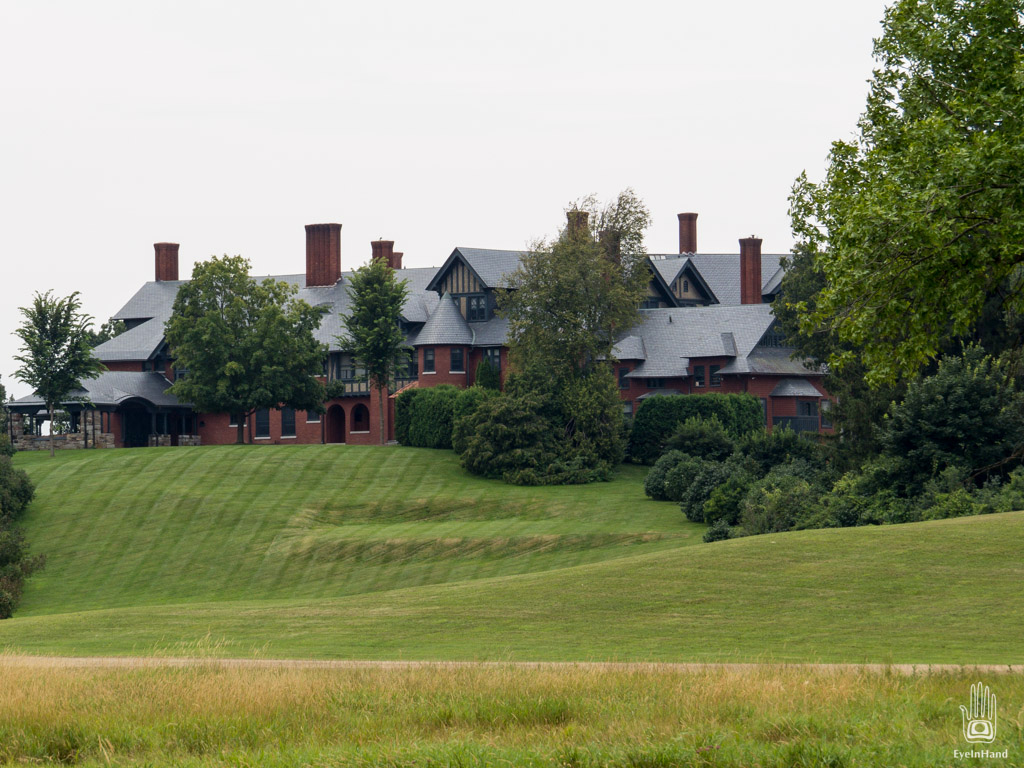 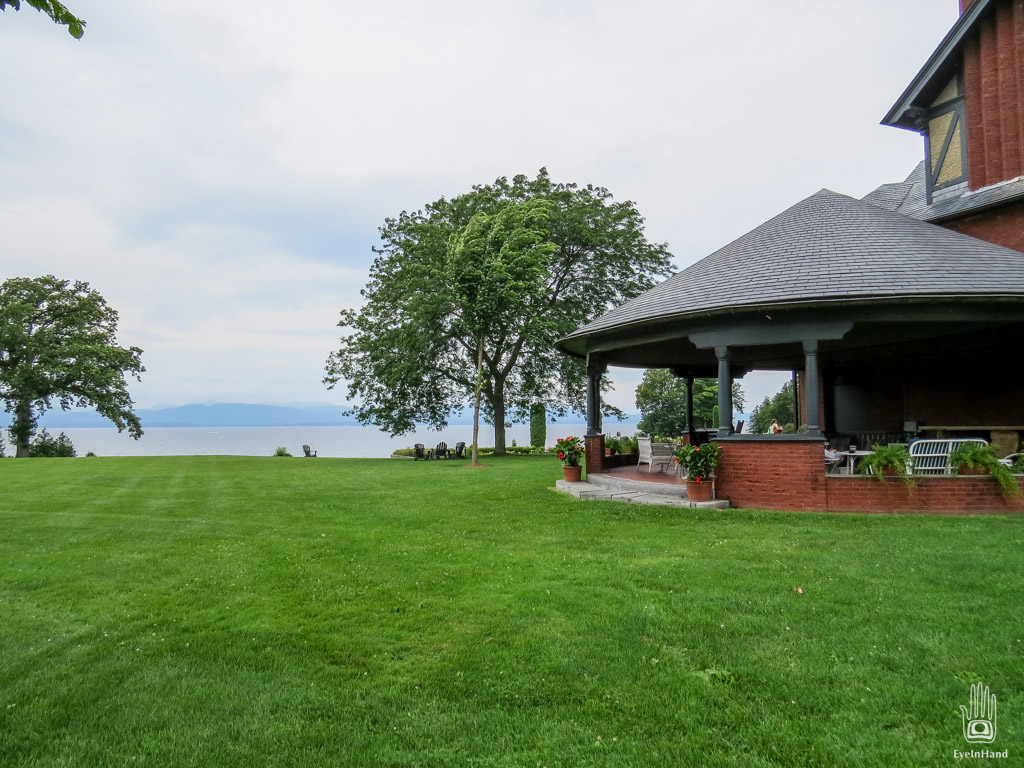 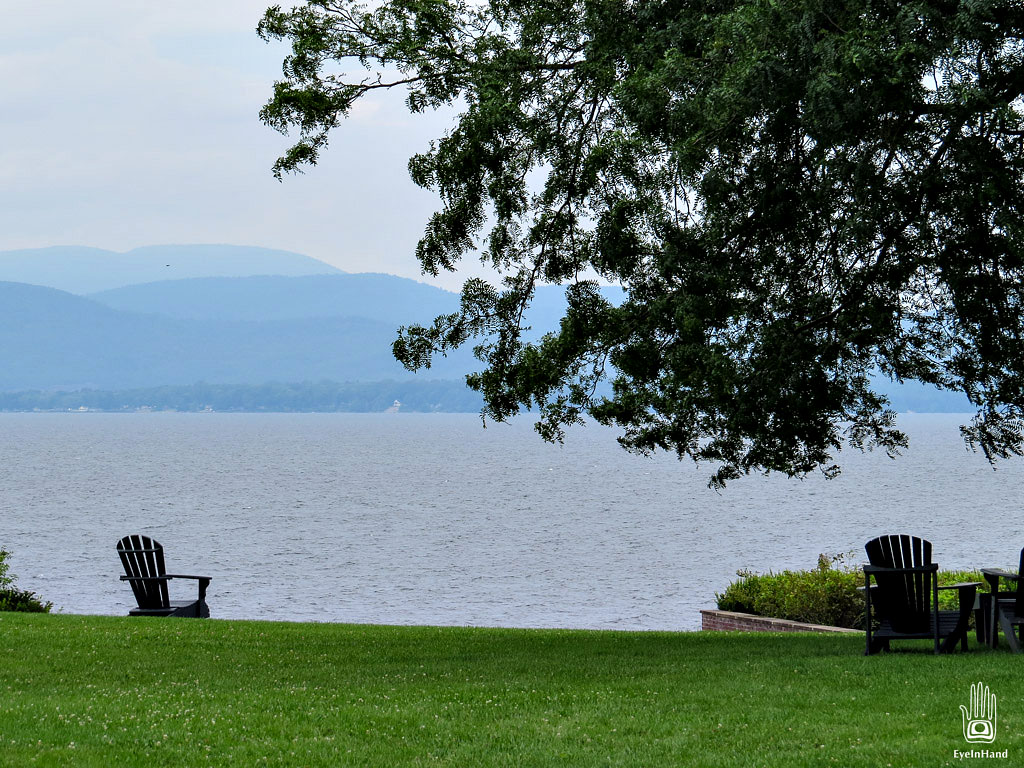 After the walk, we met family for dinner at a fine little restaurant in the town of Shelburne, called The Bearded Frog. That night we slept to the sound of shrouds tapping time against masts.

In the morning, Nelleke made omelets. We chatted for a long time over good coffee. She’s led a fascinating life. She left home in the Netherlands as a teenager, and landed in New York in the early ’70’s, falling by chance into a group of bohemians and artists who later became rather famous – people connected with Andy Warhol’s Factory. Through them, while still very young, she was wafted through American high society: movie makers, politicians and diplomats, rock stars, masters of industry and finance. Eventually, she ended up here on the shores of Lake Champlain, built this house, and raised a family. Now she does restoration and refinishing work on transient boats moving up and down the Hudson, at the oldest shipyard on the waterway, just up the road from the house.

We had a great time telling stories and exchanging boat care tips. Terri and I were sorry to leave, but we had plans for a long bike ride along the lake before heading for Montreal. 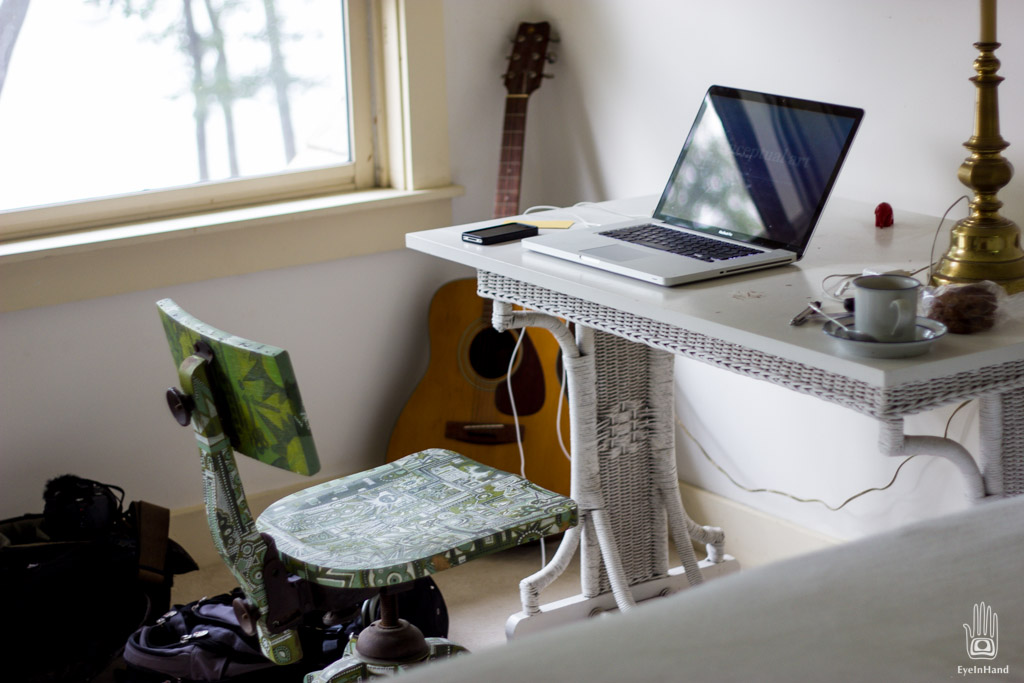