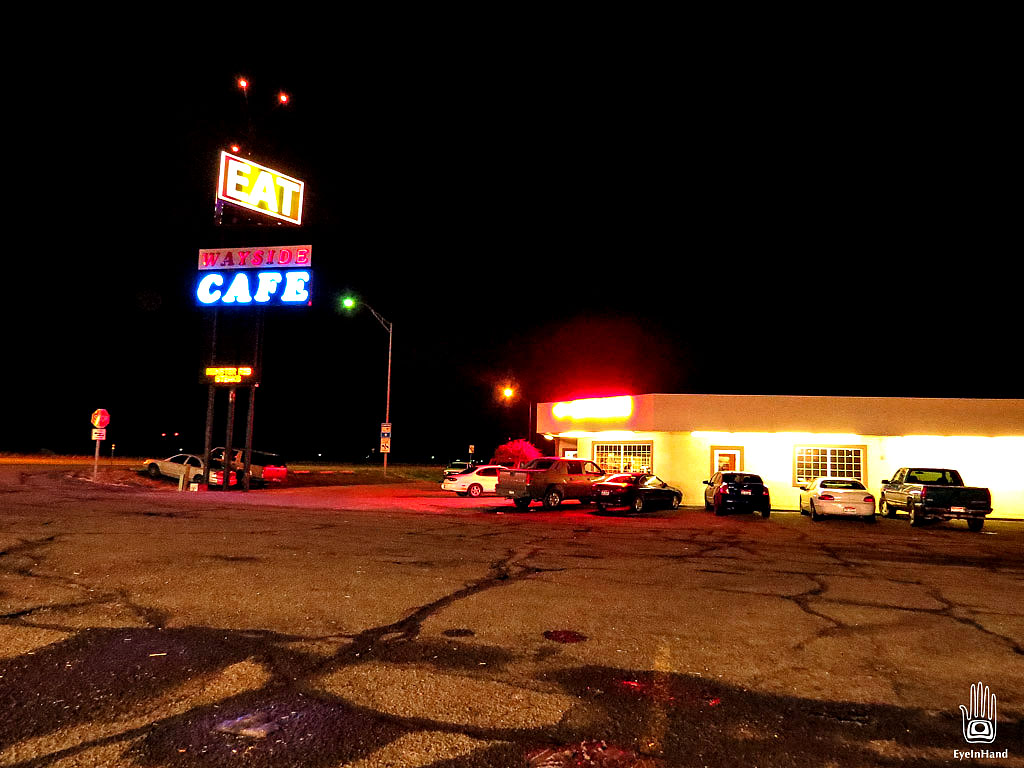 Even in the dark we can see this is a different landscape. (I say “we,” but Emily is sleeping.) Hills are rounded, not craggy like the mountains we just left. Valleys are broad pans, and the highway undulates through them. Everything bears the mark of those biblical floods pouring out of Utah. It’s an empty landscape, scoured bare of people, too, apparently. The one gas station we see in the distance – a single light glowing in a nimbus on the otherwise dark prairie – is closed. We need gas again, soon.

This is the approach to the Snake River Valley: a wide, flat, elbow shaped plain, the dominant feature of southern Idaho. Though a river runs through it, as did those those epic Old Testament scale floods, it is not just another alluvial valley shaped by water.

No, that’s not what made it. Massive terrain altering floods not good enough for you? Ok, how about this: Multiple super-volcano super-erruptions. BAM! ‘at’s what I’m talkin’ about. 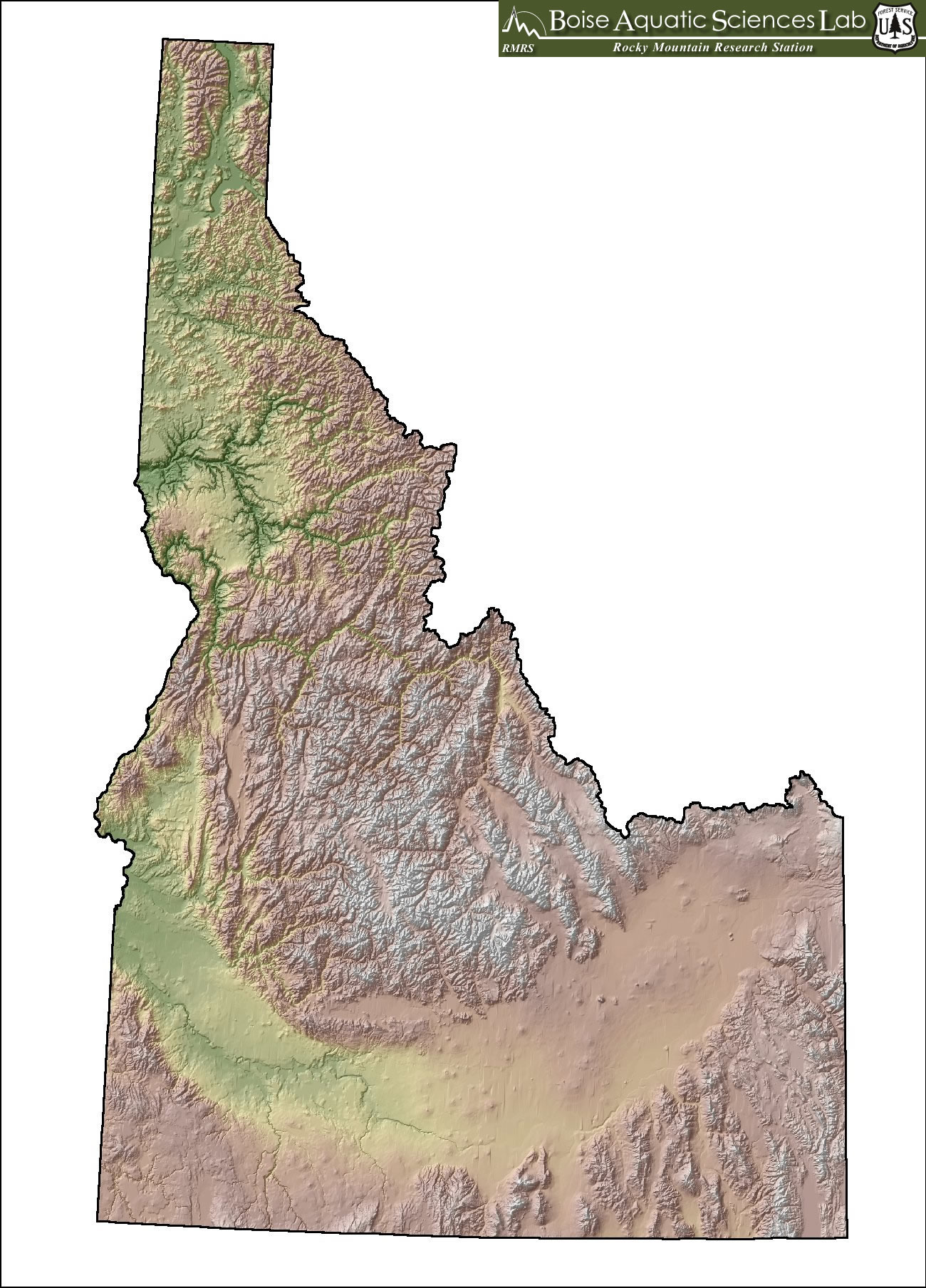 The Yellowstone Hotspot is a thin place in the earth’s crust, a remnant of the planet’s more violent past. Imagine a heavy slab of wax dragged slowly over a hot burner. Every few millions years the sheet melts through and explodes with pop. That burner is now under Yellowstone National Park to the east, and is the energy driving all those geysers and boiling springs.

At least seven times in the past the continental shelf, sliding westward over this super heated cauldron, has melted through. The resulting explosions released enormous amounts of energy. Living things burned to death a hundred miles away. At the eastern edge of Nebraska, over a thousand miles away, whole herds of rhinoceros (yes, rhinoceroses in North American (rhinoceri?) isn’t that wonderful?) were suffocated in 12 feet of ash falling from the sky, where they were entombed and fossilized in situ.

Needless to say, it also tended to flatten things a bit around here. The craters filled in with ash and lava flows, the shelf shifted on, and the cycle repeated, leveling whole mountain ranges. All that ash and lava and flood driven silt make for rich, if dry soil. We pass many, many green dot center pivot irrigation fields. 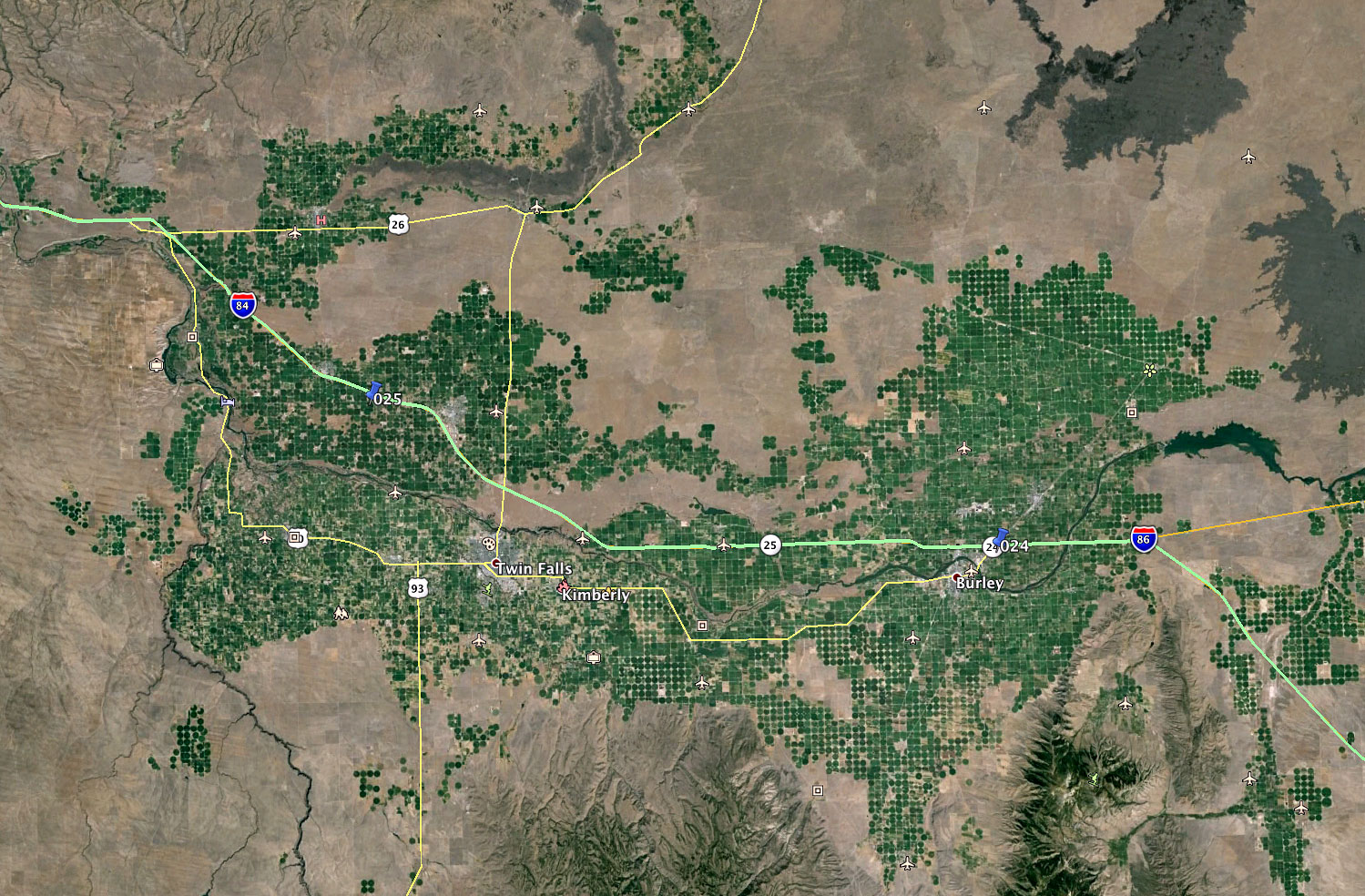 In this elbow of epicness we merge once more with the path of Lewis and Clark, who were again trying to continue their journey by water, in crude dugout canoes. Must have been an exciting ride. The river poured through boulder strewn canyons carved by floods over numerous falls, the largest of which, Shoshone Falls, are higher than Niagara. 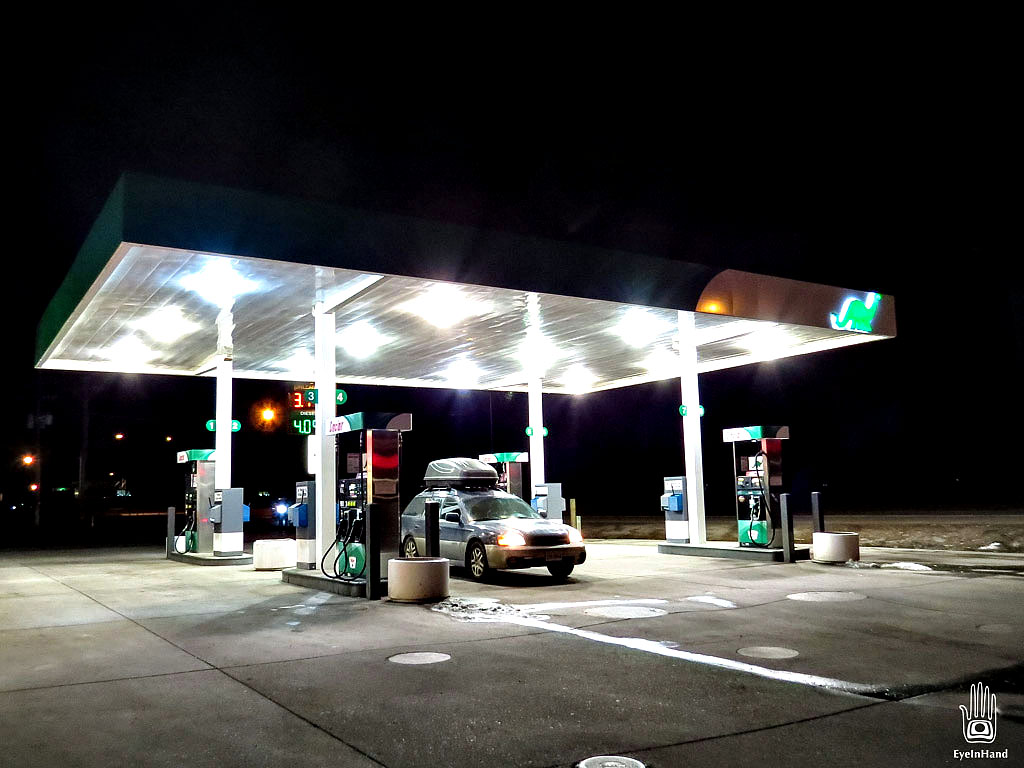 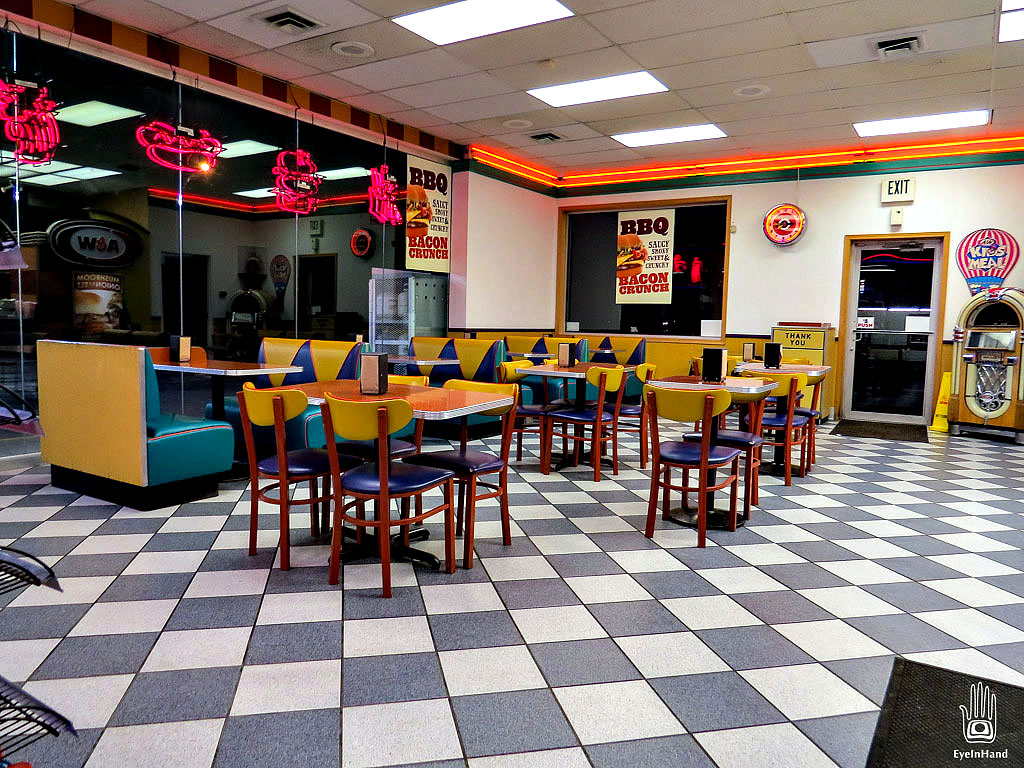 Finally an open gas station at a place with no name between Hayburn and Rupert. As Emily fills up, I ask the girl in behind the counter about snow. “Yeah . . . I think it snowed today. Yup, it did. But then it was hot as hell. Then it snowed again, I think. That’s the thing about Idaho. You don’t like the weather, just wait a while. It’ll change, and you won’t like that either.”

Next to the station is a place called the Wayside Cafe. It’s late and we need to eat while we can. Emily thinks it looks sketchy, but I think it looks authentic. It’s both. 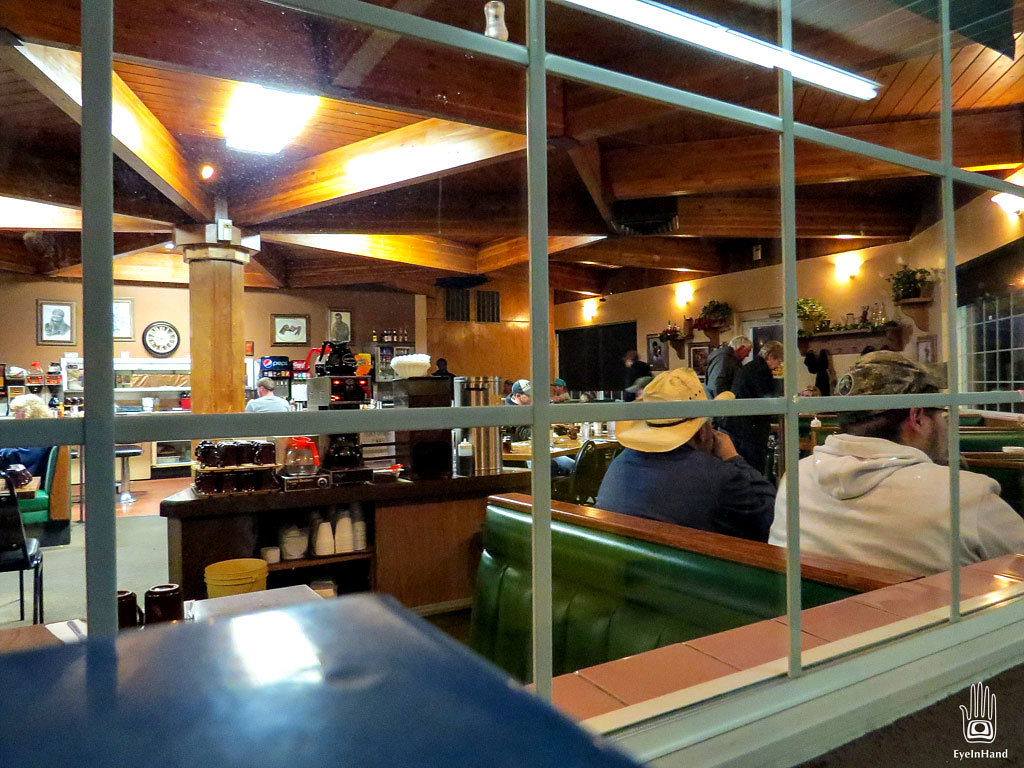 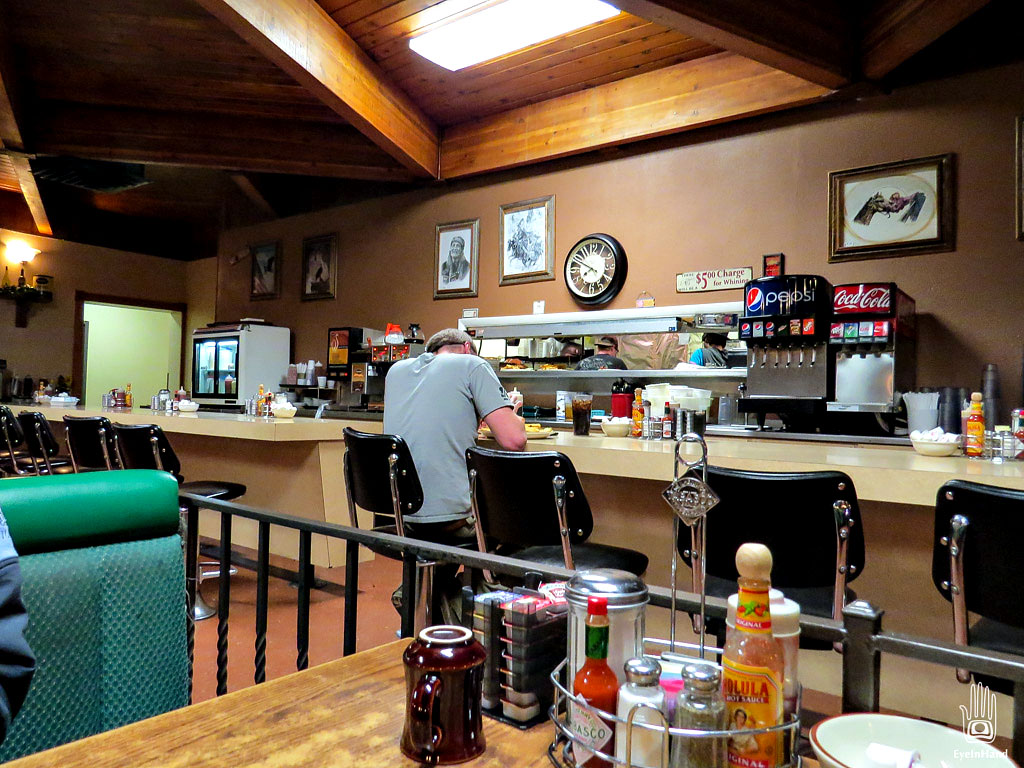 In addition to truckers in ball caps and ranch hands in cowboy hats, with wallets chained to their belts, rifles in the windows of trucks and pistols on hips (Idaho is one of those states where you only need a permit to conceal a gun, not display one openly) there are also families with kids, and tragic harried waitresses who clearly are somebody’s mom and grandma. It’s an old place, little changed in half a century – a time capsule from the ’50s, when the only road in this area was two lanes and it ran by out front like main street. The dining room is circular, the roof held up by a central post radiating joists. Modeled after a Native American kiva or sweat lodge, a place for visions and epiphanies. We need to leave some money here, I say. 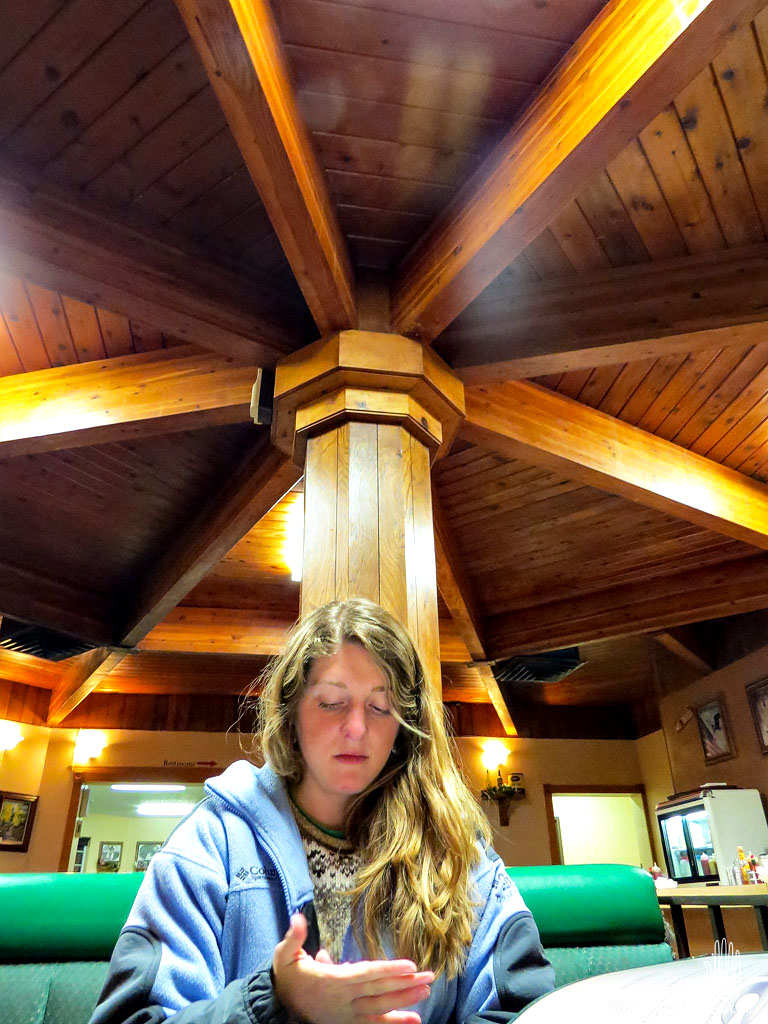 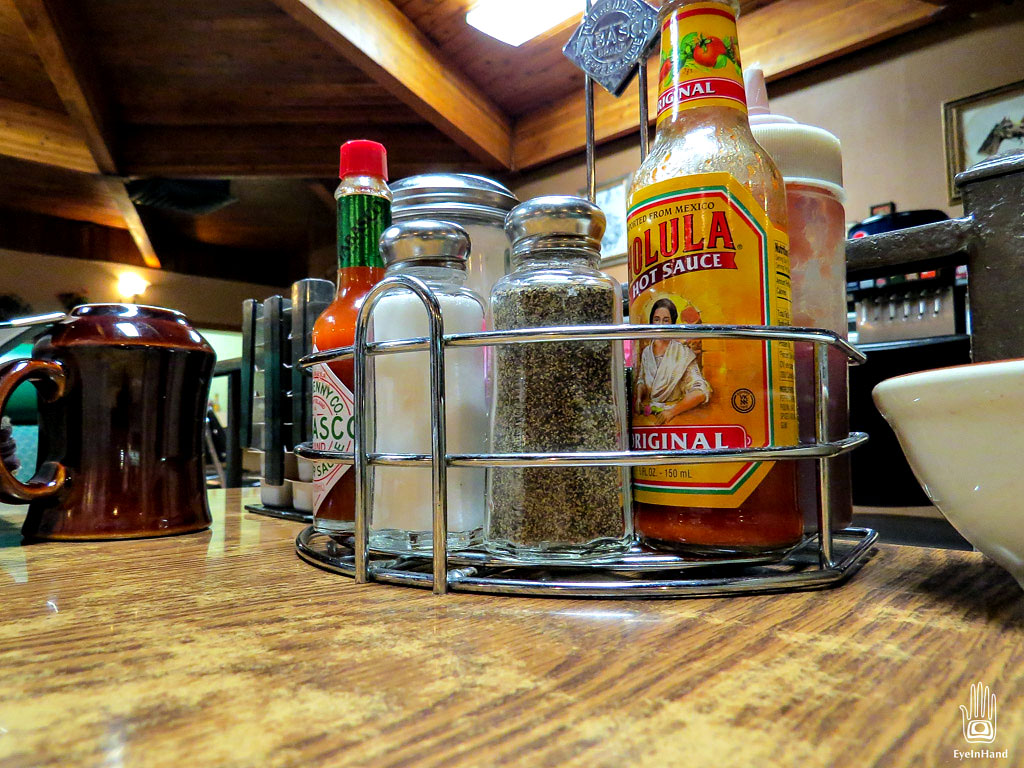 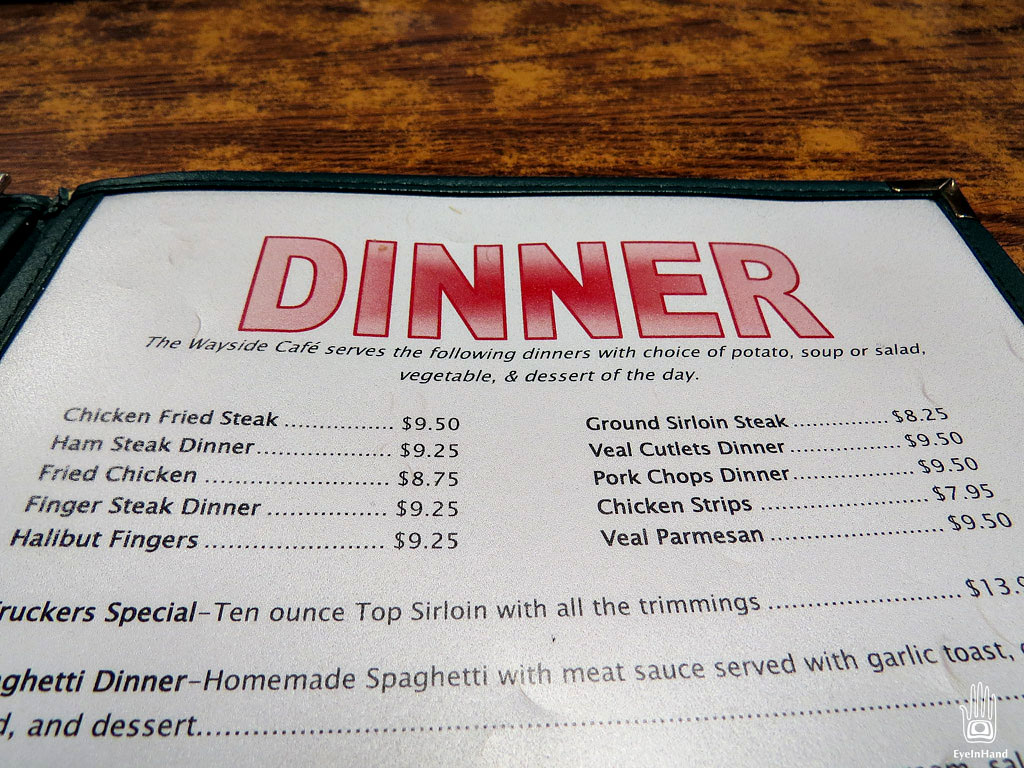 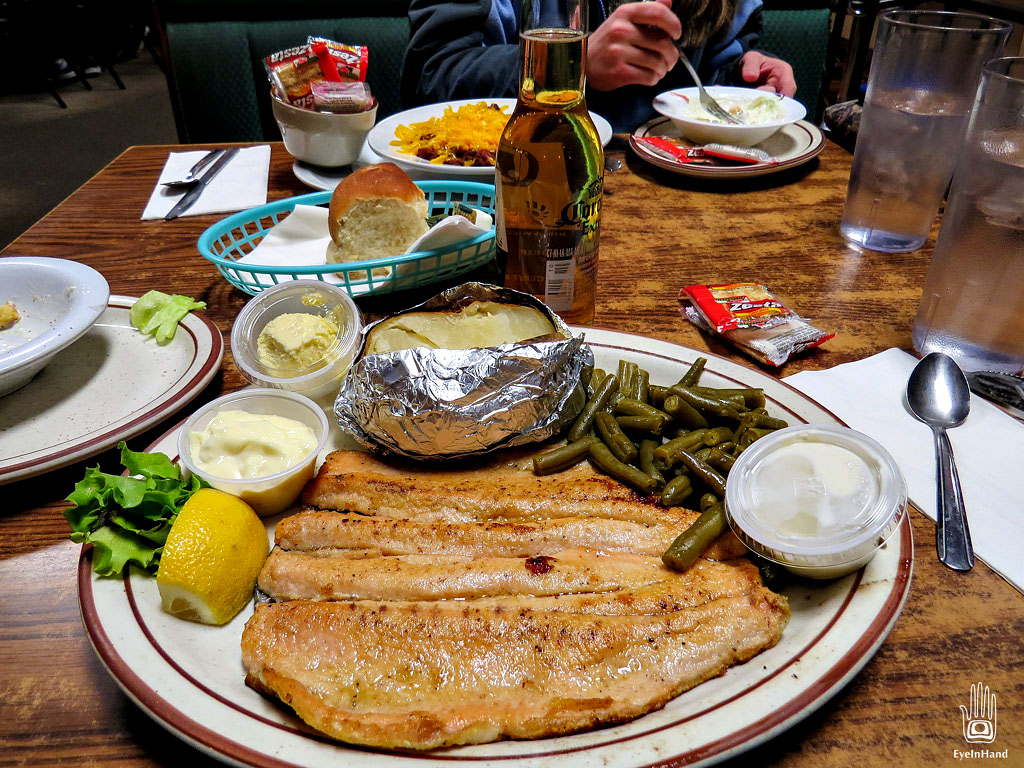 I get the broiled trout, which comes with canned green beans, baked potato and all the fixins, iceberg lettuce salad, and white bread rolls. Emily gets chili and a salad, and a pile of crackers. We both get refrigerator pie for desert, gratis, because the waitress likes us. Everybody deserves pie, she says. The whole tab comes to $20. We leave a big tip. 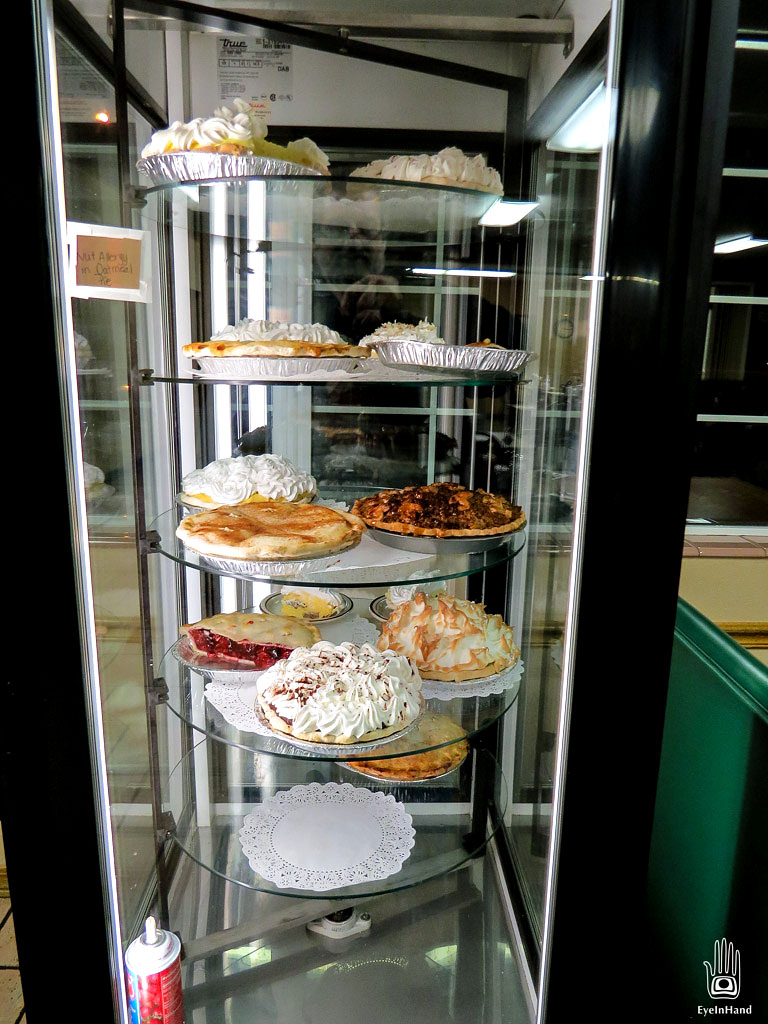 A teenage girl, who earlier was bent over a plate of food at the counter, rings us out. This place has been here a long time, I say, nodding at the fading photos on the wall. Oh god, she says, it’s been here FOREVER! A family with small children gets up to leave, and the cook comes out to hug the kids goodbye. The waitress comes over, and she and the girl say goodbyes to all, calling each by first names, and I realize that we have dined with three generations of one big extended family, all working in this restaurant together tonight.

Twin Falls, and more CAFOs next to the highway. Not seen, but smelled.

Outside Boise, 150 miles later, we are road worn and have to stop at the first place that looks inhabitable. Emily wakes me when she finds something promising. The night clerk says everything is full. But she does have the Presidential Suite, which we can have for just $XX.XX more than a double room. I’m too tired to do basic math. If she had smiled twice I would have paid double.

The room is a minor monstrosity Emily dubs “The Reagan Suite” because it’s decorated in a throwback to the early ’80s. Well, it would be a throwback, but it’s more a holdover, since it simply hasn’t changed since then, and smells a little funny. Whatever. We’re asleep in minutes.

Before nodding off, I text a buddy from college who has been making waves in politics here for years. A great guy, who somehow manages to swim against the current without offending it. Chances of meeting are slim, but it’s nice to let him know we’re passing through.

Thus ends Day 3, which started way back in Fort Collins, Colorado, across all of Wyoming, then Utah, and now Idaho. 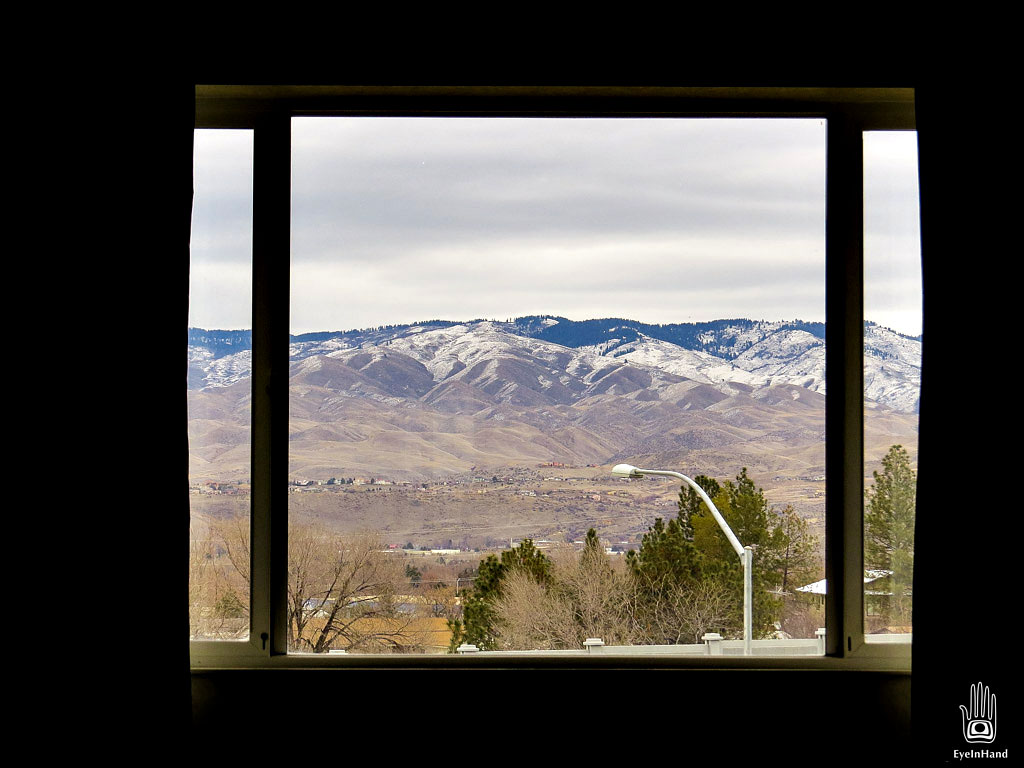 In the morning, coffee in hand and drapes opened wide, there’s a view of the interstate. Across that over Boise, and across that to the Sawtooth Range. Watching the traffic, something odd catches my eye: A fuzzy, grey-green, easy-chair sized creature trotting up the shoulder of the highway into the city. A bear? Then several more. The coffee has not kicked in, but I’m relatively certain I am not imagining this. They move deliberately, going up the ramps, between moving cars, over obstacles, down the ditches. In pairs and threesomes, dividing and reforming, as though hunting. A pack of coyotes? Finally it registers: tumbleweeds. 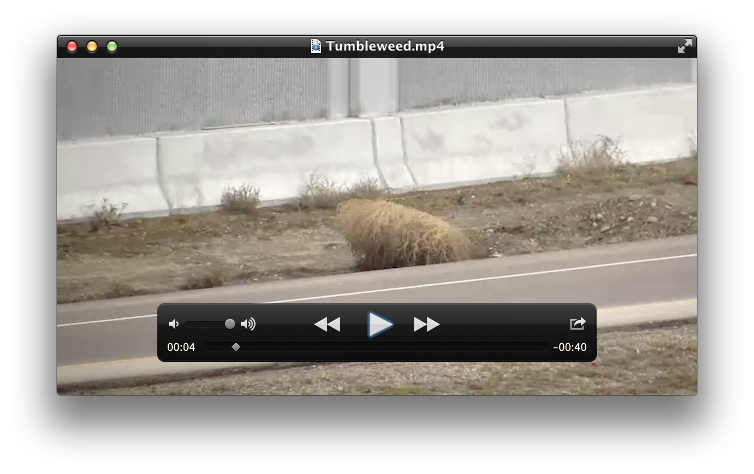 Jim’s message includes an invitation to dinner and beers, a place to stay, and a tour of Boise. Wish we could. Next time, Jim.

My laptop is limping. Years of constant banging in and out of hotels and cars and airports, rendering massive amounts of data while driving and typing and texting and downloading, have been hard on it. All the photos and video and time lapse captures from the trip are on that laptop. Hmm. This initiates an emergency trip to the Boise Mall for a portable hard  drive. In an hour the whole system has been backed up and shut down. Oh well. If it’s dead, the important stuff is now safely in a side pocket of the backpack. 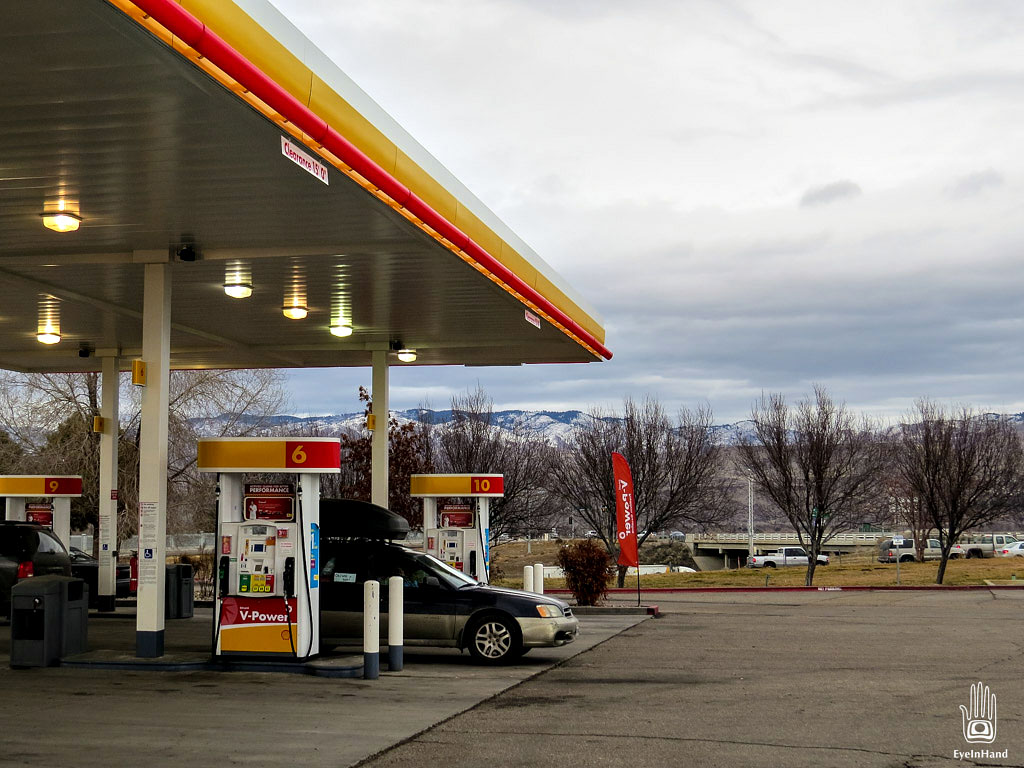 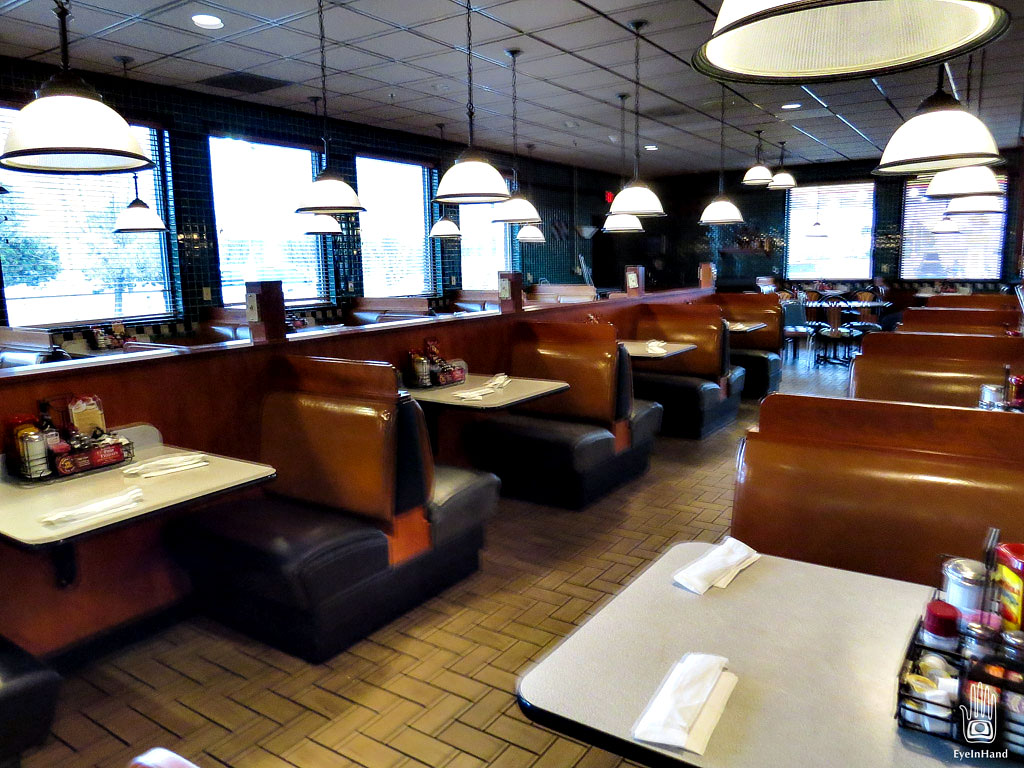 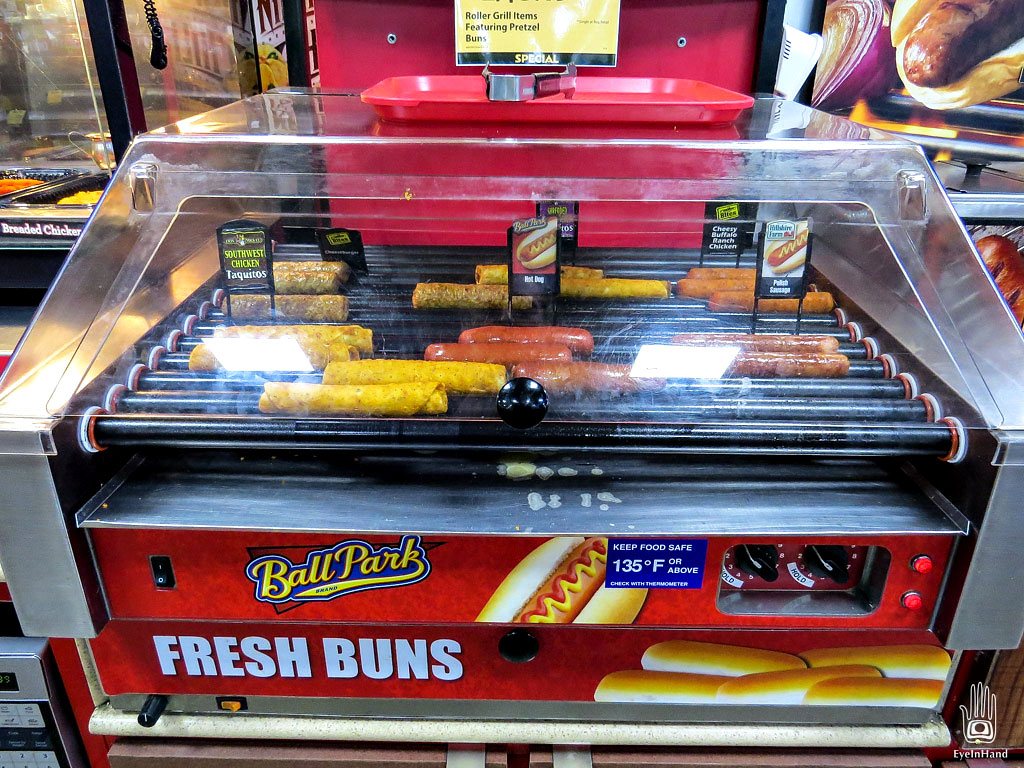 At the gas station next door we fill up and grab breakfast (scales, restaurant, weiners (at 7am?)) and hit the road for Oregon. The highway rolls through more dry and barren hills. Abandoned houses and old cabins stand isolated in odd places. A train glides along a stream bed. 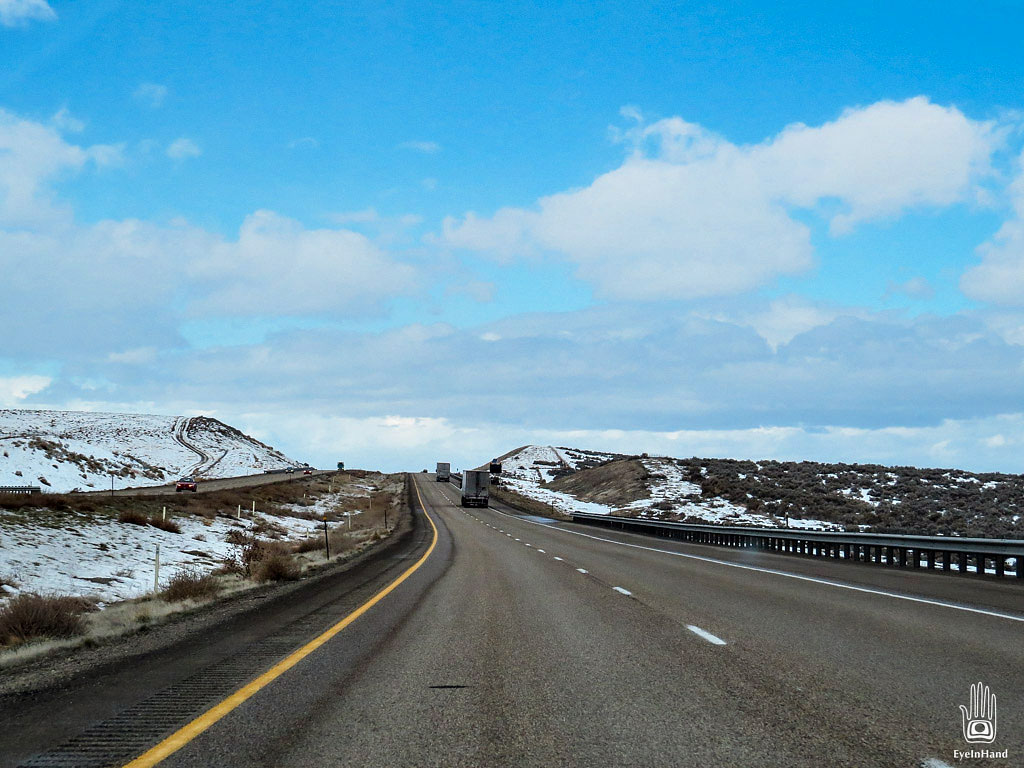 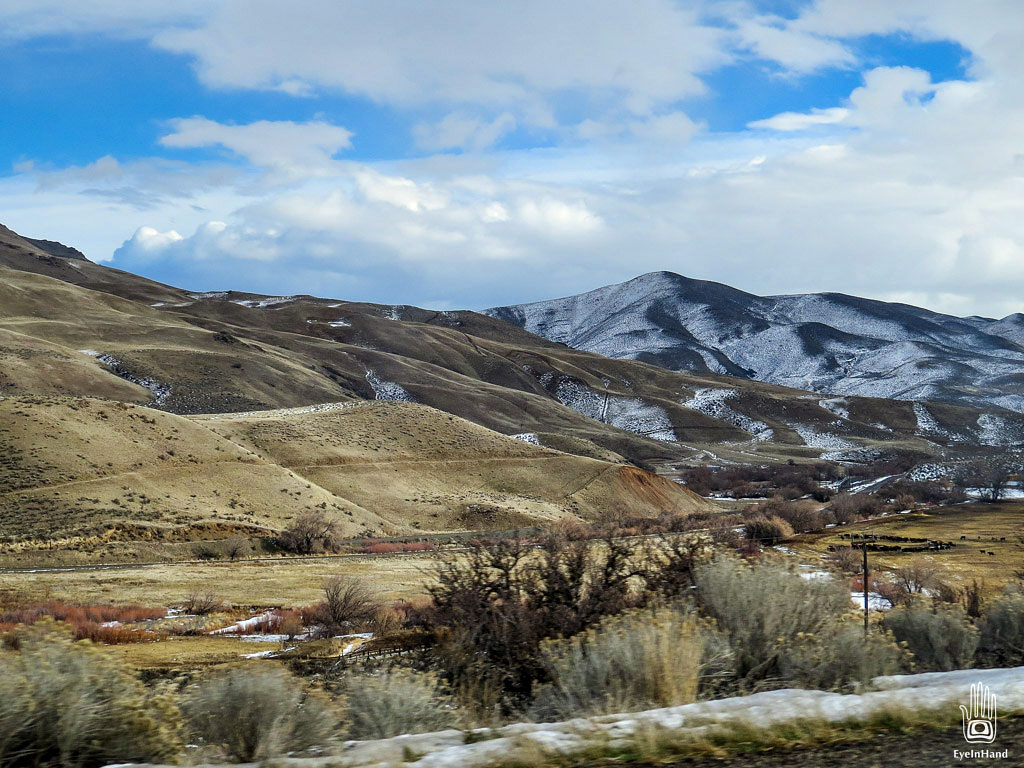 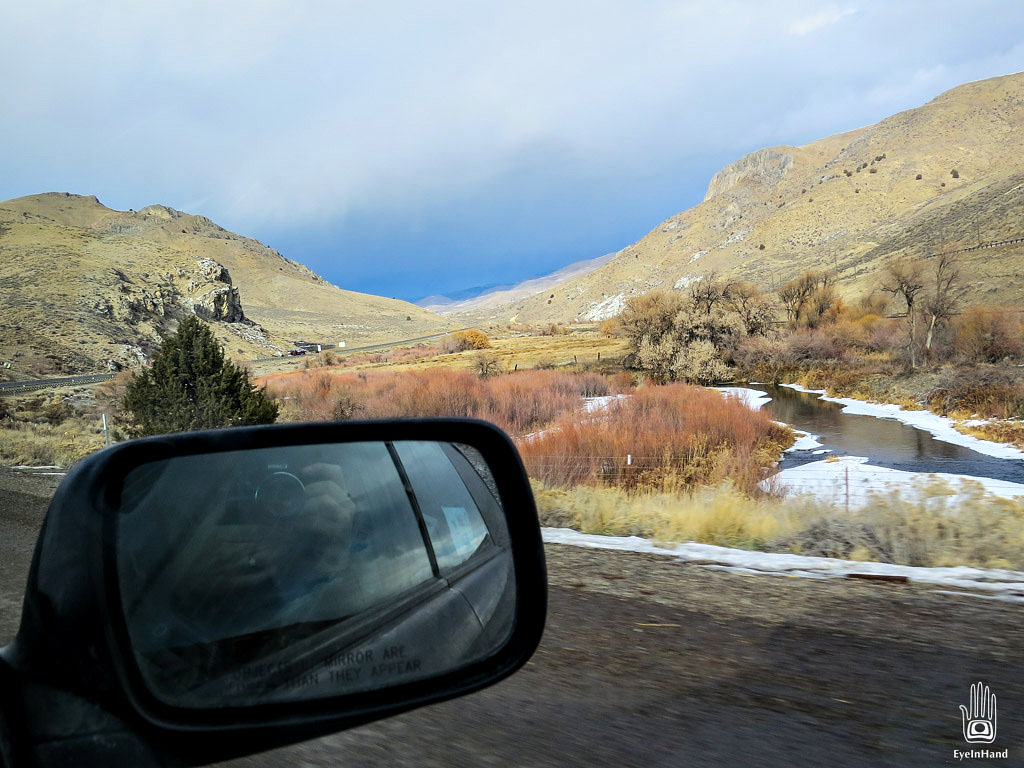 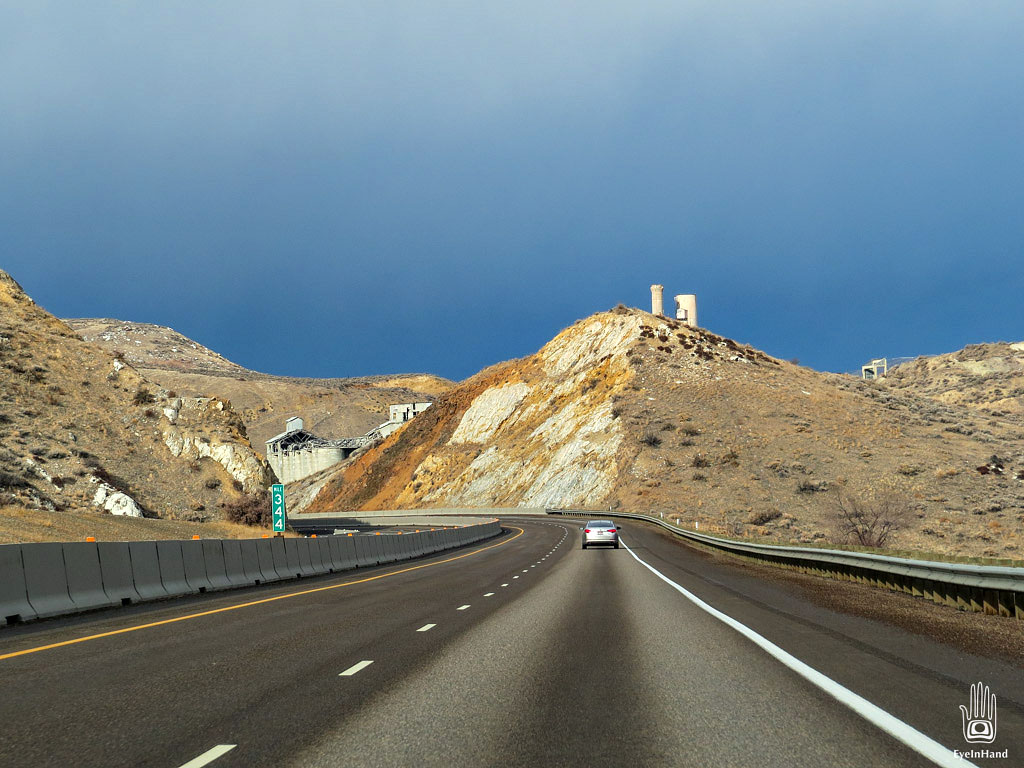 It starts to sprinkle rain, and we come around a corner to find a double rainbow arching over the highway, a natural harmonic of the manmade one back in St. Louis. We’re about to enter Oregon, and this seems a good omen. Emily is singing and dancing in the driver’s seat. 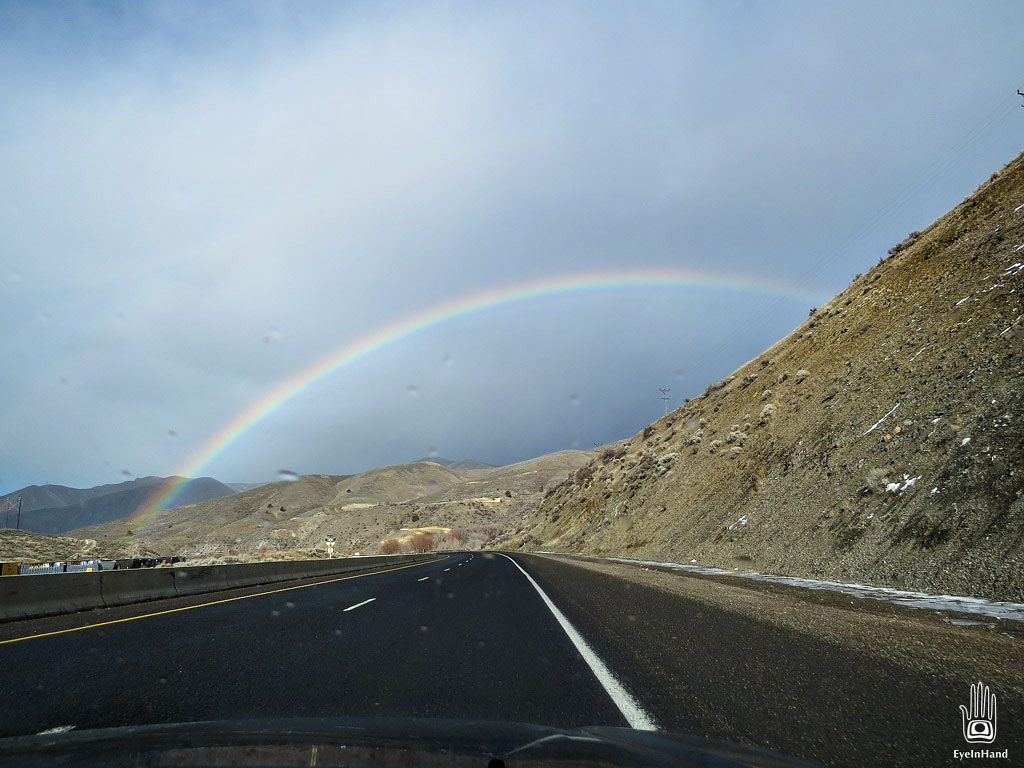 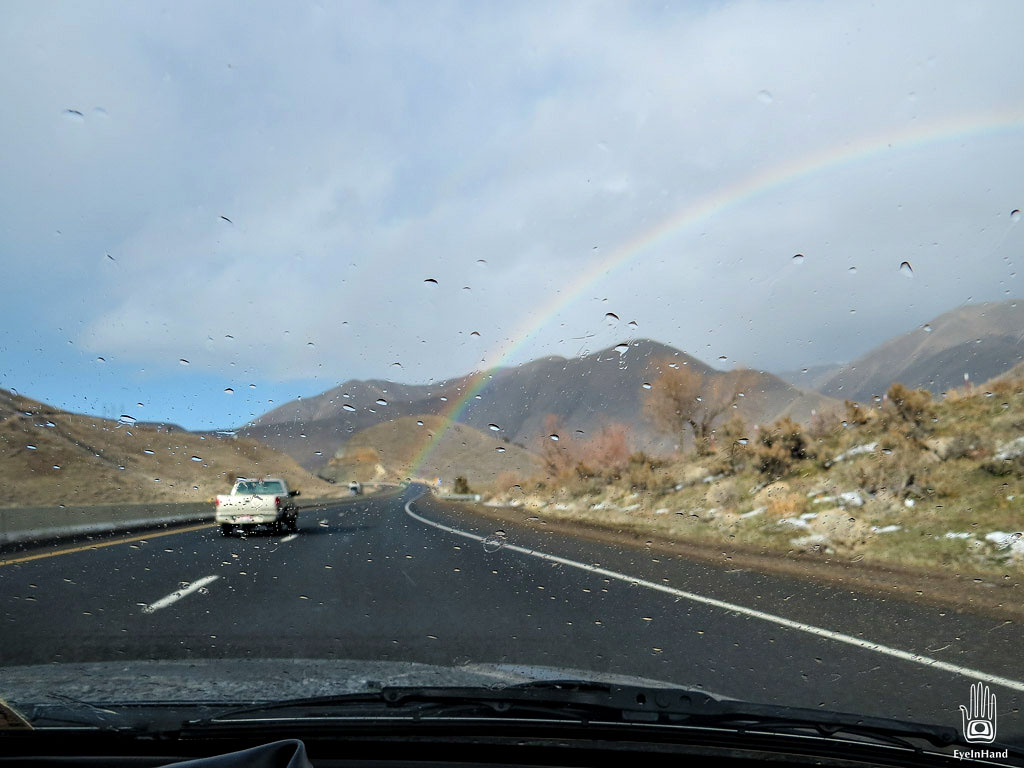 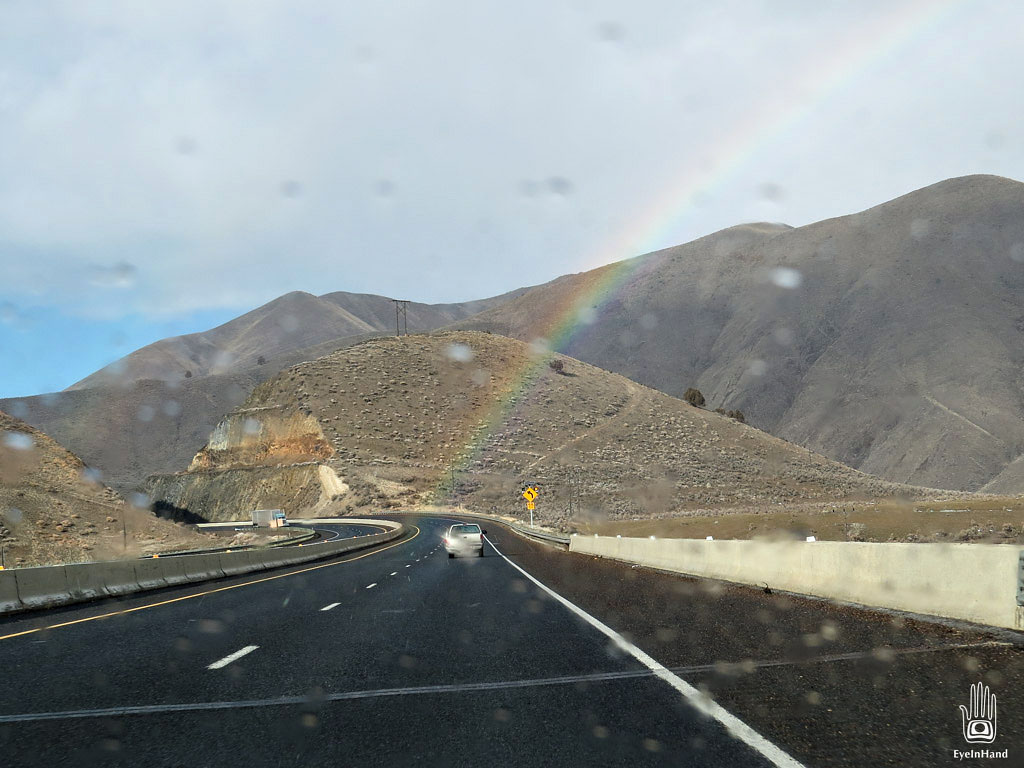 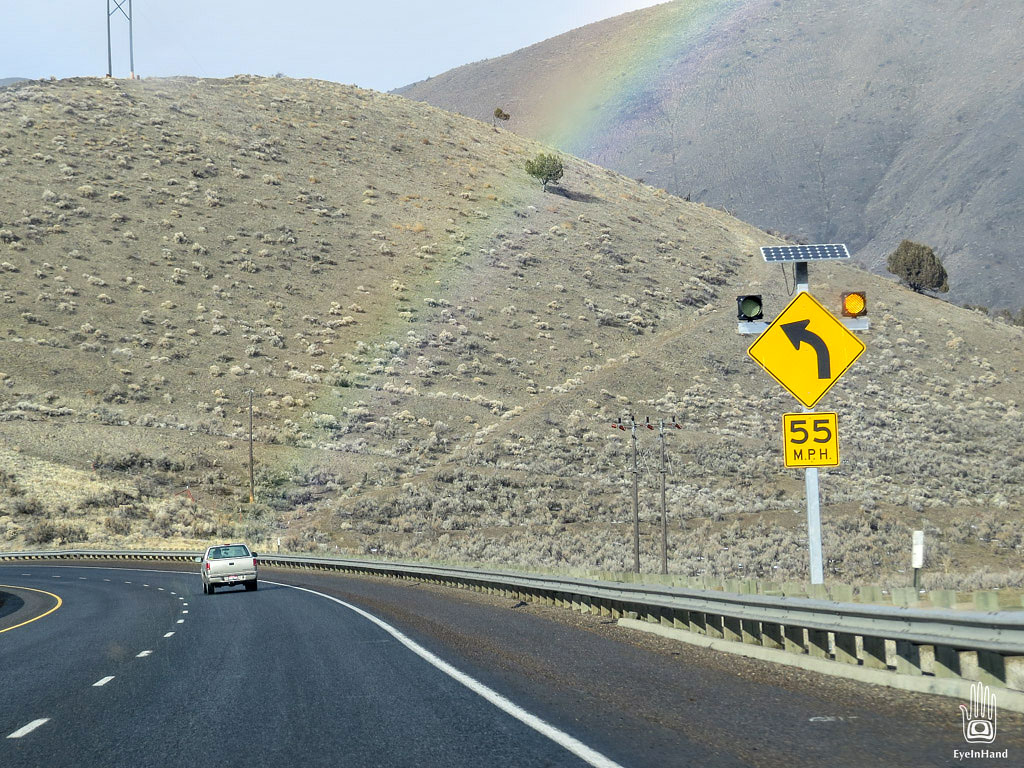 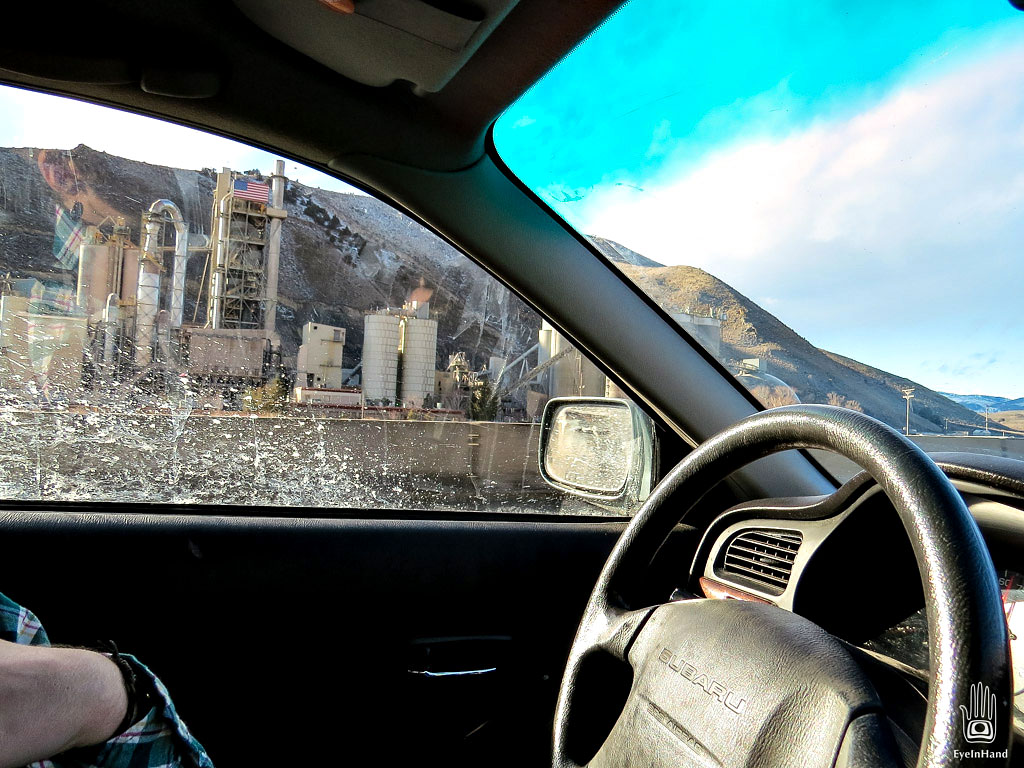