Harris with a tailwind in Mabu

It’s now gusting over 20 knots, and waves are building quickly. With the second reef tied in, and the chicken jibe out of the way, we have the wind and waves spanking us in the backside. Essentially this is now a five boat drag race across the river, all running for the mouth of the canal.

We’re way out ahead because we started first, but the other boats are coming really fast. It’s not a dead downwind run, which is no fun, but a very broad reach. Still, the Caledonia is amazingly well-behaved. This is probably the biggest wind Harris has had the boat in so far, and I can tell he’s both nervous about how she’ll handle and pleased with the results. Whitecaps are starting to break around us, charging in from the Sound.

Once out of the lee of the north shore we’re in the long fetch that stretches to Hooper Island, and the waves immediately get bigger. We’re rolling up one side and surfing down the other. Big fun. The waves get biggest at the shoals, just before we enter the canal, for a big finish.

Then . . . total silence and calm. We enter the canal and, like shutting the door against a blizzard, it’s instantly quiet. Like, wow.

There’e just enough wind to sail down the canal. Overhead we can see the tree tops whipping in the breeze. As we pass small gaps in the treeline the wind punches through and smacks us around a bit, then backwinds the sail, etc..

A group of teenagers in an outboard skiff motors up toward us, headed north, but they’re local kids and know better than to venture out today. Instead, they’re crabbing with small pots in the canal, and making an impressive haul of big Blue Jimmies. This has both me and Harris thinking about dinner.

Here’s some fun video from that ride: 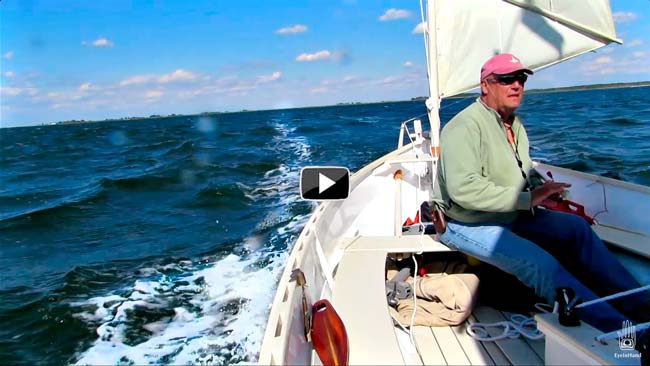 Later that night we all go down to the Waterfront Cafe in Crisfield. We’re famished. Our waitress, who also happens to be an elementary school teacher by day, brings an obscene amount of food to the table. Cream of Crab soup starts it off. Crab stuffed flounder filets as big as sirloin steaks. Tonight’s special is Chicken ‘n Dumplins, which completely buries a large dinner platter edge to edge. Kevin eats a whole pizza by himself.

Even the most ill-behaved among us falls silent and contrite, either out of some remembered reverence and respect for our teacher, or simply because tucking into the food takes all our concentration. Maybe both.

Back at the camp we get a good fire going. It’s chilly now. There’s whiskey to warm bellies, but the wind is looking for us and has cold fingers.

Sunday morning is again clear, but high winds are again expected. Most of us haul out for the long drive home. Kevin M. convinces Mike and Harris to stay and sail with him as rail ballast to Smith Island and back. We hear later they luck into a slight lull in the middle of the day for the outgoing leg, but are glad to have two big guys holding Little T down for the ride back.