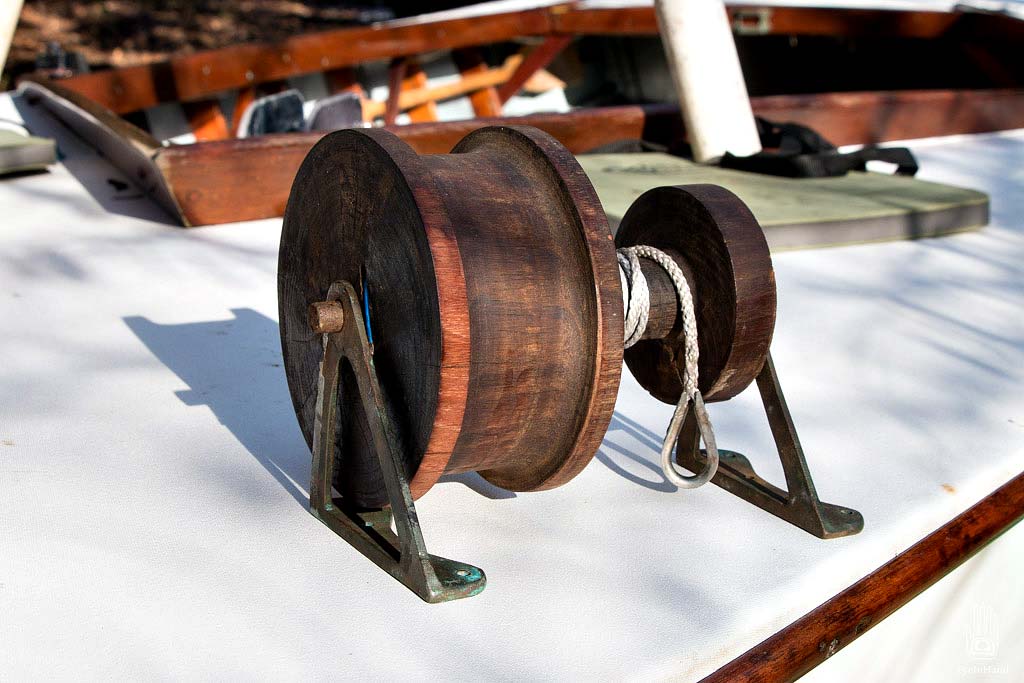 Sunshine and temps in the mid 60s today are a welcome reprieve from snow, which is mostly gone now. A great little window for attending to a couple of things on the new old Lightning. I had intended to raise the mast to see how that works and to assess the rigging (which actually looks relatively new). That will have to wait for another day – I got distracted by the malfunctioning centerboard winch.

The steel centerboard weighs 130 pounds. It hinges at a pivot pin, so you don’t have to free lift the whole thing; but the purchase point at the front of the board is only ½ the radius of the whole 5 foot board. I have not yet put a fish scale on it to check, but would guess the pull required to raise the board all the way is likely at least 130 pounds. Hence the need for some sort of mechanical advantage on these boats, usually a winch. The plans John gave me actually show as many as three similar winches – one for the jib forestay tension and another for a boom vang – there’s a hole through the deck next to the mast where the vang line likely passed through to the winch below. But these plans are newer than this boat. Hard to know where the original locations were, and what for. 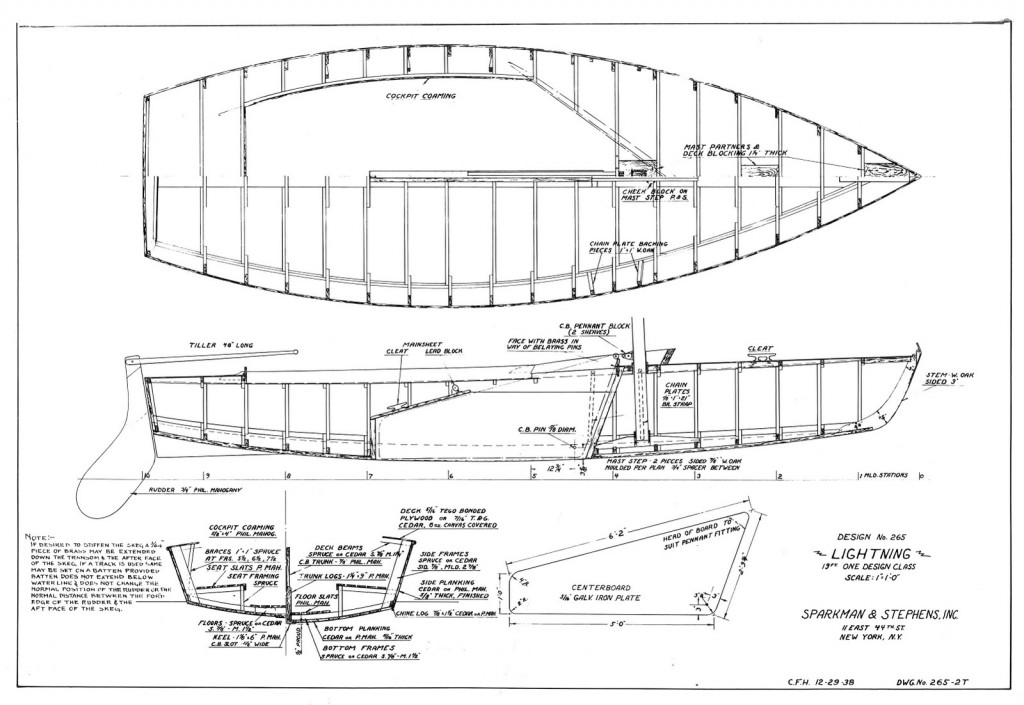 Lines plan showing tall board, which protruded above the deck line. These
were later modified, the top triangle cut off to keep the board lower.

From helpful folks at the Wooden Lightning Yahoo forum, I learned the design of these winch assemblies changed many times over the years, and not always for the better. Some turned out to be so problematic and prone to malfunction that many people ripped then out and replaced then with more reliable block & tackle rigs. The most common problems included the power or pull ropes riding up over the ends of the spools, or poor positioning such that sheets and other control lines get tangled and wrapped up in the spools, or the whole assembly might pull loose from the mounts from the combined pressure of 260+ pounds. Not terribly encouraging. The later designs seemed to have more problems. Cheaper materials and construction methods in some cases, or experiments in reducing effort or space or position that may have solved one problem only to create new ones. I have not seen a current production boat, so don’t know what those use, but am now very curious. 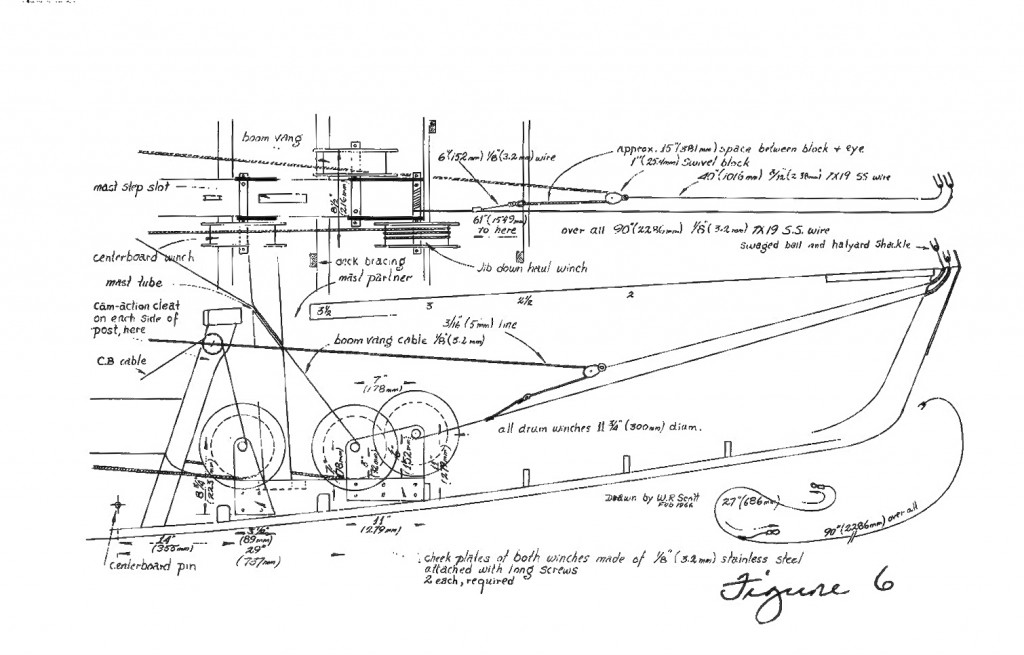 This boat seems to have one of the earlier and more reliable designs. It’s a double turned spool – one large end and one small – turned from one piece of some incredibly hard wood. If I had to guess I would say dogwood, only because that was preferred for hard wooden parts like spindles and mallets and such in the first half of the last century. I really have no idea what it is. However, when the tabernacle mast was added, and the centerboard case rebuilt, the centerboard winch was moved. The location is now a good one. It’s mounted in a block of oak to the underside of the deck, integrated with the tabernacle, where it’s unlikely to get sheets and halyards tangled in it.

* ed.: Steve thinks the wood might be lignum vitae. Based on photos and other info, I think he’s right. From Steve, “I was out on the barge off Cape Hatteras when the lifted the USS Monitor turret several years ago.  I remember one of the guys showing me some blocks they found mixed in with the coal (turret was inverted and filled with coal, not to mention the bodies of two sailors).  He said they were made out of lignum vitae.” 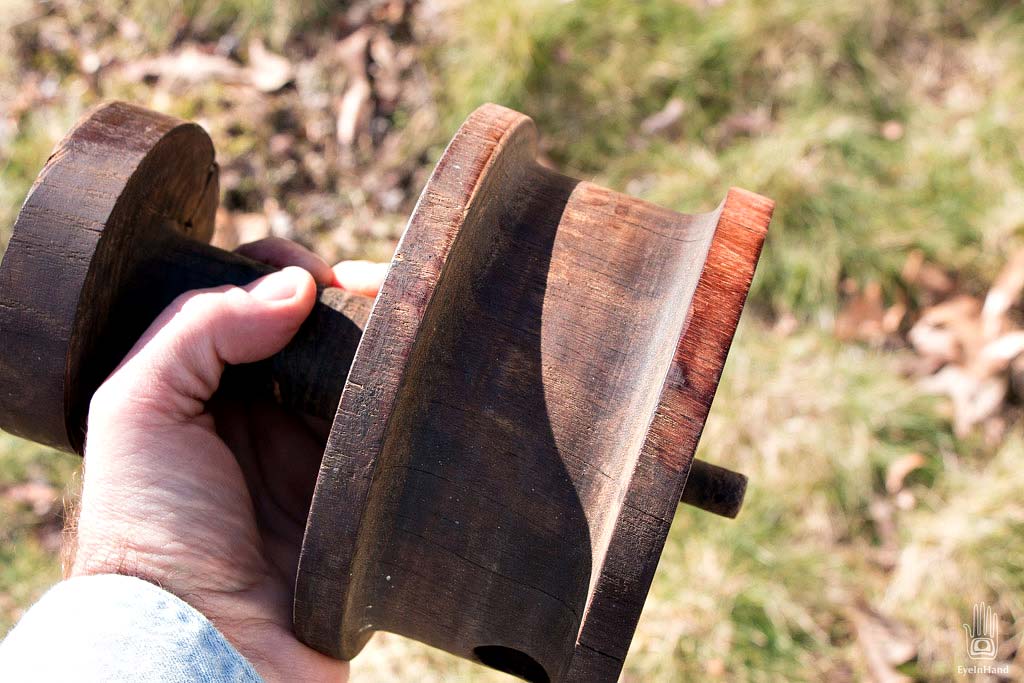 The years have not been kind to this winch, though. The wooden spool is terribly out of round, by more than a quarter inch. The high side rubs and jams against both the bronze bracket and the centerboard trunk brace, which was re-shaped to allow for the new winch location. After drying out for a couple of weeks, it was better but still far from able to spin a full turn. Today I disassembled the whole thing, figured out the various problems, and got it working again.

The first task was to cut off the pull power line, which was way too big. The diameter was so thick it was likely to bind against the deck if it ever double wrapped. Then I cut off and disposed of the gnarly old steel cable which did the hard work of pulling up the board. I replaced both of these with something more suitable. 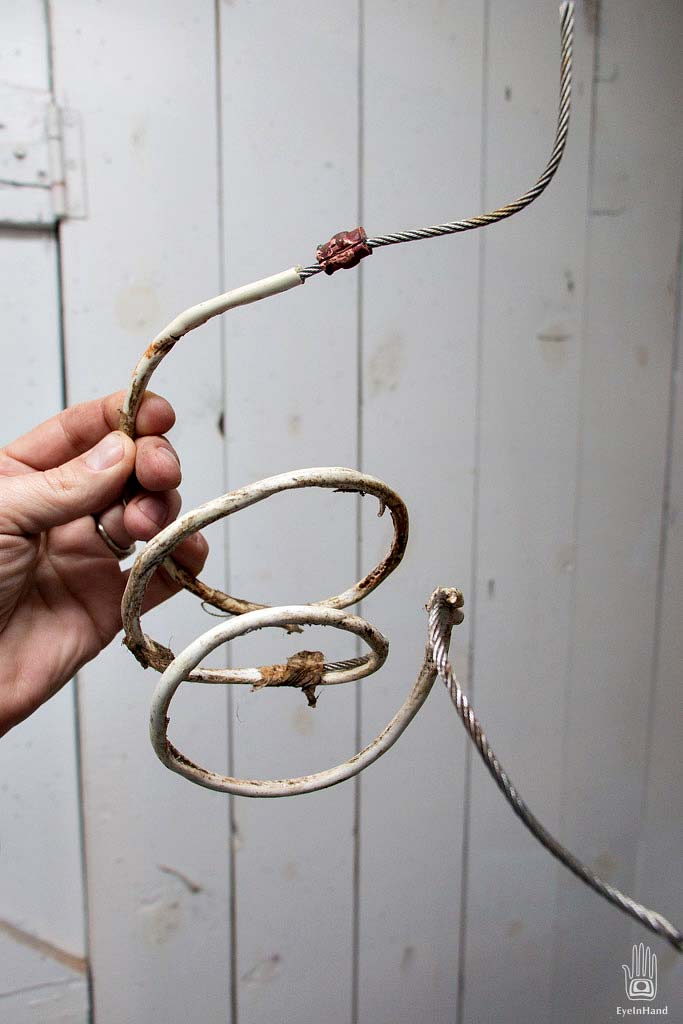 Dyneema is a braided synthetic cable now replacing wire cable in many applications, and it’s a huge improvement. Pound for pound, it’s far stronger than steel. A smaller diameter synthetic cable can replace larger and heavier steel cable. On power winches and tow lines it’s safer, as it doesn’t store energy like steel – with low stretch, soft and flexible, if it slips or breaks it immediately falls slack, whereas steel cable snaps back with such force it can destroy people and property. It’s easier to work with, as it doesn’t require special tools for swaging. As it wears out it doesn’t bristle with sharp needles to stab you like steel cables do.

It’s essentially rope woven from the same tough material I used for the centerboards on the Melonseeds – slick, strong, and almost indestructible. It goes by several brand names: Dyneema, Spectra, Amsteel, etc.. On many sailboats, especially smaller ones, it’s fast replacing wire for standing rigging in stays and shrouds. Steve uses it on Spartina, and I found a link to simple instructions for splicing a loop around a thimble on his site. Steve tells me he is sailing this last day of January, while I mess with sailing equipment. 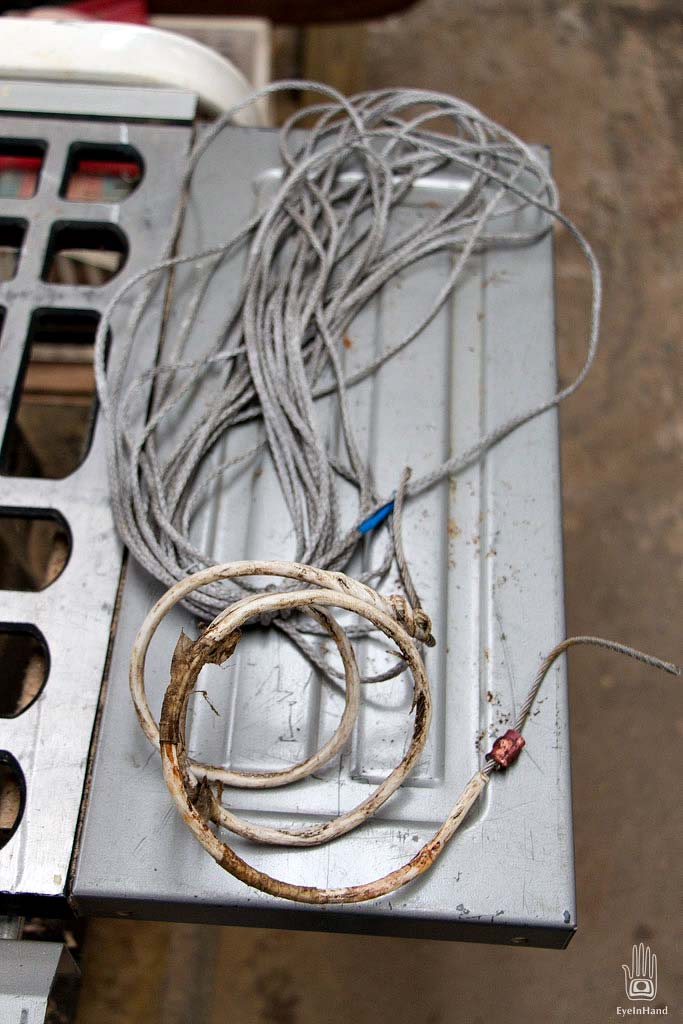 I happen to have some ⅛” Amsteel Dyneema leftover from the Melonseeds, where I use it to rig the tops’ls. This tiny braided line, less than half the diameter of the ornery steel cable, is rated for 2500 pounds. Way more than needed for this centerboard. It was more work cutting off the old wire cable, by far, than splicing the new line onto the thimble. The Amsteel was so thin I had to use a small nail for a fid.

But first I had to do some rehab on the old wooden spool. Using one of the bronze brackets on the axle as a guide, I scribed a line along the rim to see where perfectly round would be. Either the axle was inserted off center, or more likely the wood took on a new shape over time as it swelled or dried unevenly. Half the big spool was off by ¼”. Without a lathe, there’s no easy way to re-round the whole thing, inside and out. Might could use a big half inch drill chucked down on the axle or something like that. But it was the outer rims causing the problem. So I took it to the belt sander and, using the bracket as a guide, turned it by hand against the belt until it was closer to true, and smooth. The inside of the spool will still be out of round; but, if I use more appropriately sized line, that might be OK. 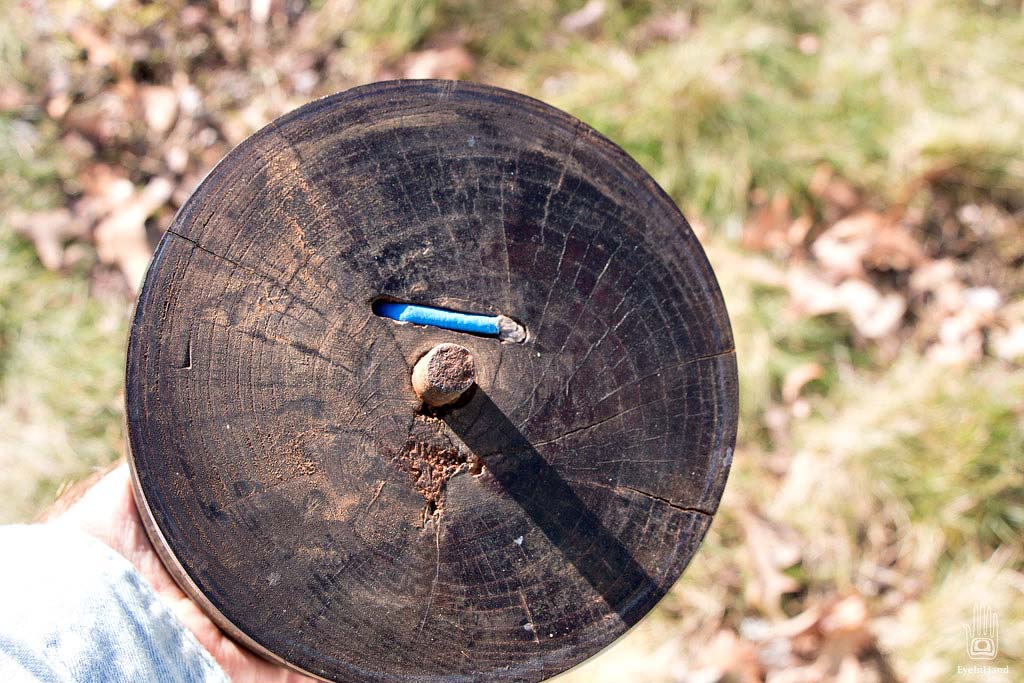 Drum after the first pass on the belt sander.
You can just make out the pencil line upper right.

Another problem is it looks like one of the bronze brackets was replaced at some point. However, it was replaced with the wrong one – there are two starboard side brackets instead of a mirrored set of one each. That means on the port side the bracket angle turns inward filling the gap between the spool and the deck mount. The mounting screw heads double the thickness of the bracket, compounding the problem. Otherwise, there would be plenty of clearance. So I had to take more off the spool than would otherwise be necessary. Looks like I have about ⅛” clearance now. Maybe that will be enough. 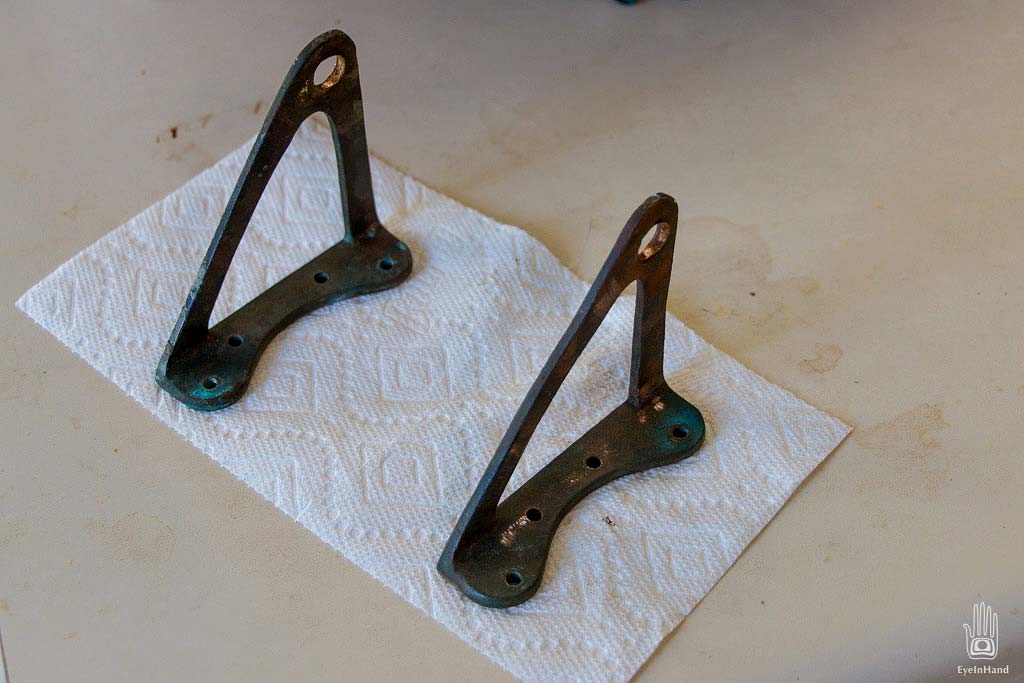 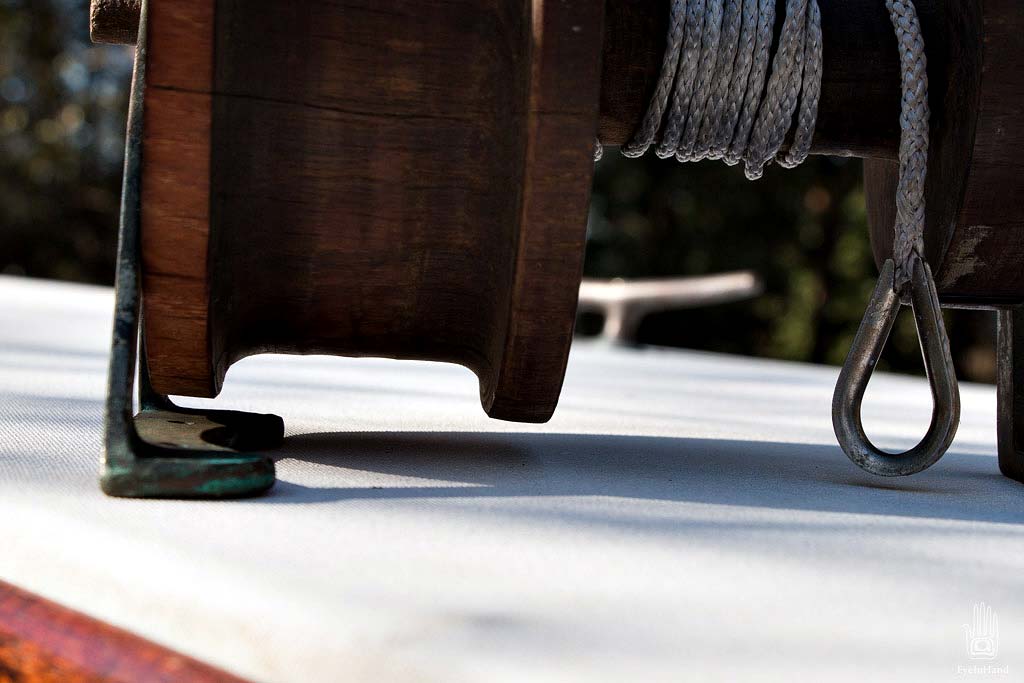 Clearance between spool and bracket, before screw heads.

Got the new Amsteel line and thimble attached, and the whole rig remounted. I also have some leftover high-tech low stretch dinghy racing line left from my first sharpie built over 10 years ago. It happens to be the perfect size for the power line. I attached that, leaving a long tail for now. That power line attaches to a handy 3:1 block arrangement that John installed. Essentially a little Handy Billy. He had such trouble with the winch he needed the extra pulling power. It uses a comfortable ½” braided line with a nice hand. I was able to keep that, only replacing it with the small diameter hard dinghy line at the front end, the part that wraps on the spool. 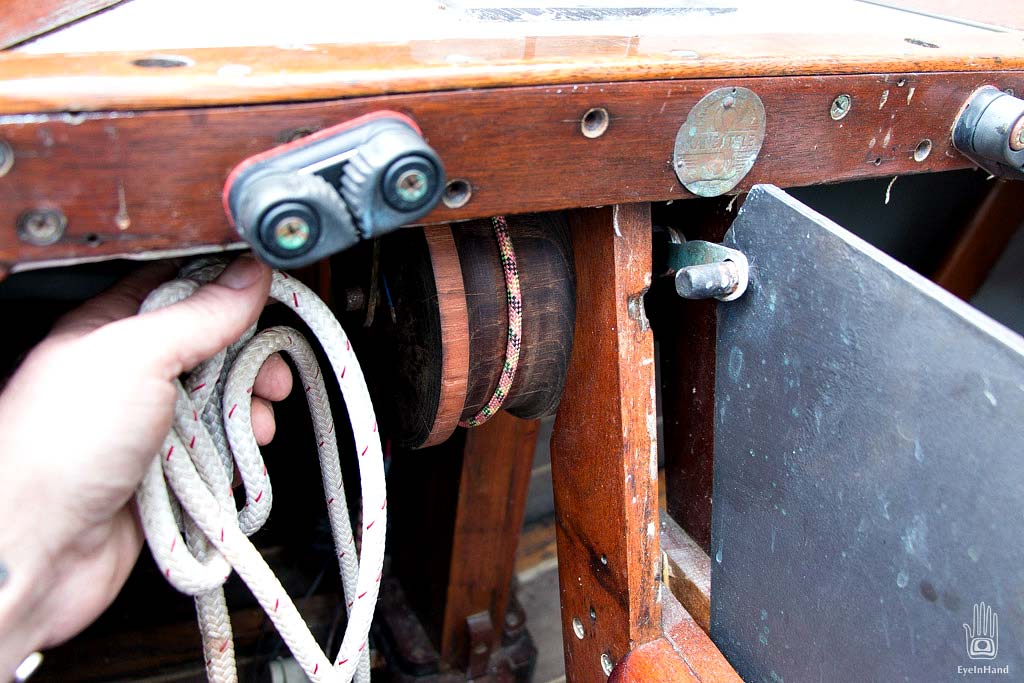 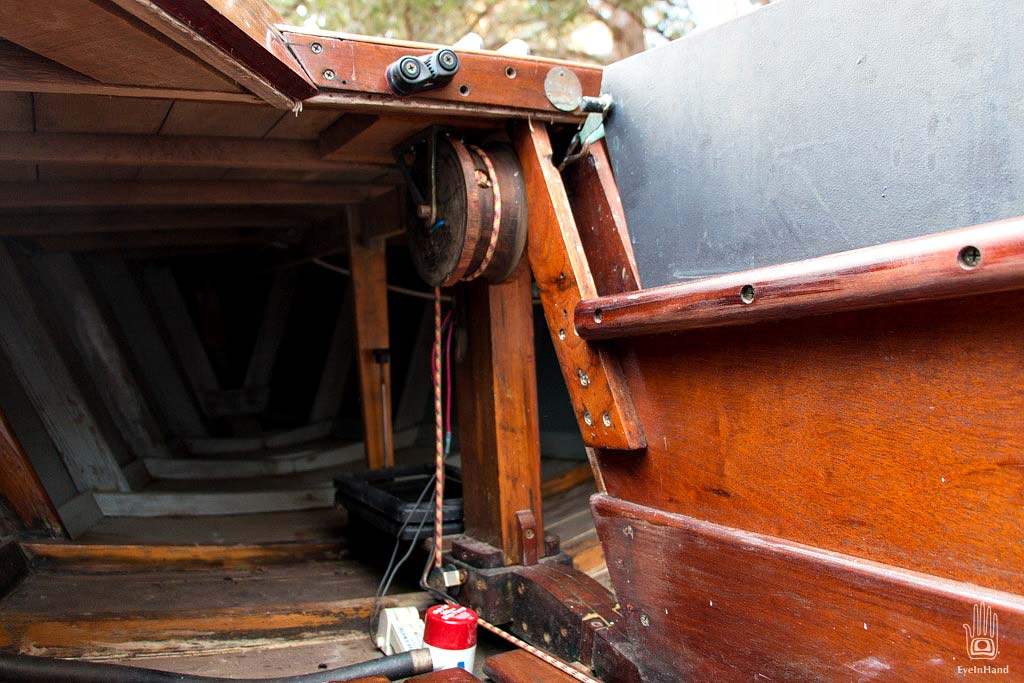 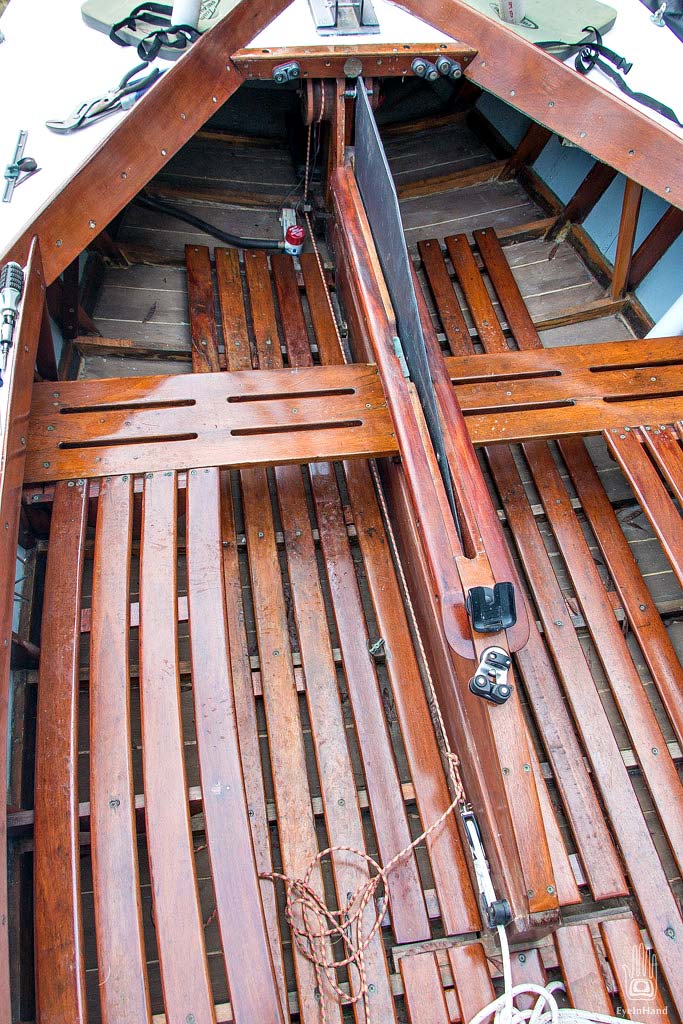 All in all it seems to work well. There’s a noticeable unevenness of tension as the wobbly spool spins on the axle, but it does work. I’ll know more once I have the boat in the water and can lower it all the way. At the moment it only moves a few inches before the board hits the trailer. 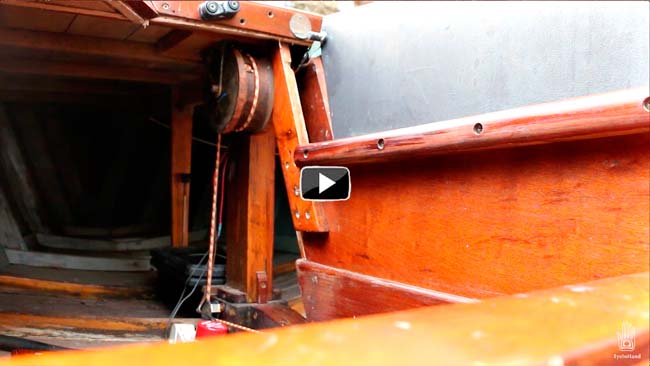 The jury is definitely still out on this whole winch thing. I’m willing to give it a try for a while and see how it does. However, I have a set of blocks on order that will give me 10:1 purchase. If need be, I can take the winch out altogether and use that instead, dead ending on the tabernacle post itself, which is plenty strong.

Before wrapping everything back up for the week I took a shot of the A-frame thrown together ahead of the big snow. It uses a combination of two fiberglass windsurfer masts lashed together for a ridgepole, some 2x4s and some scrap PVC pipe. It held up well. I think I’ll replace the 2x4s will all PVC mounted on the boat and trailer, so the whole rig can be rolled around without taking the tarp off. 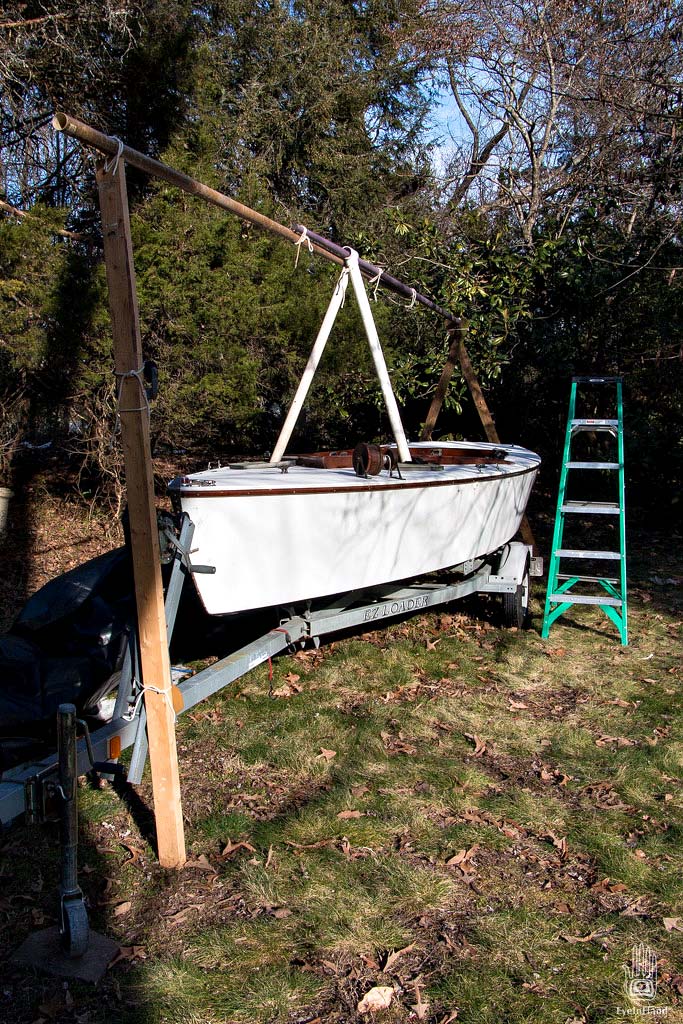 It will be almost 70 degrees on Wednesday, though raining. Maybe next weekend I can raise the mast.