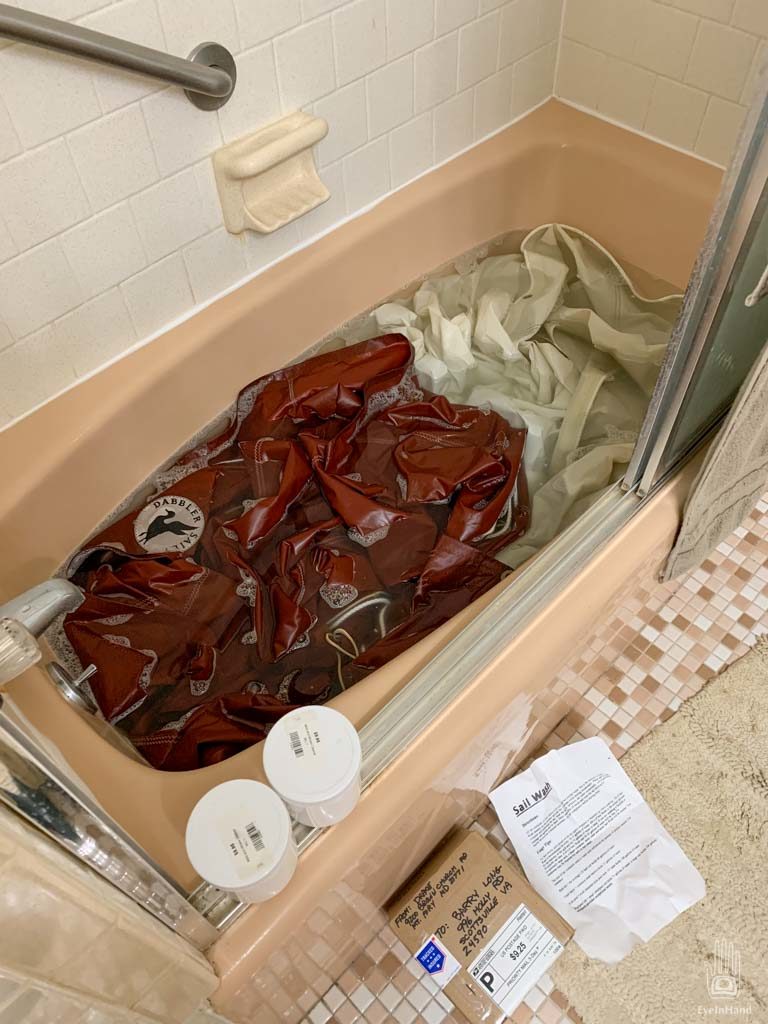 The floors got refinished Friday, so we had to stay out of the house all weekend. This finally made some time for a chore postponed for a year now – washing the Melonseed sails.

Jim Drake, a fine boatbuilder and fellow sailor in the Old Bay Club, got in touch shortly after the fire, so soon I think there was still steam rising from the snow. He asked what he could do to help.

The night of the fire, the fire marshal generously offered to take us into the house to retrieve anything of value. We were so numb we couldn’t think. He went in and pulled photos off the walls, and found Terri’s handmade jewelry box, black as ebony, and brought them to us. I could only think of one thing – my sails, stored in the basement where the fire started.

We went in by the basement door wearing headlamps, and waded  through shin deep sooty water, still raining down from the floors above. By the light of the headlamps I could see gear and tools and wood bobbing around in the black pool. The shop looked like the hold of a sinking ship. We grabbed the sails rolled up in Tyvek, and carried them out into the yard.

In daylight the next morning, I could see that, miraculously, they had not been scorched, but were covered in soot. When I heard from Jim, maybe even that day, the only thing I could think of was this boatbuilder friend might be able to figure out how to clean them.

And he did. A short time later a box arrived from his sail loft, containing two pounds of special cleaning powder and a set of simple instructions. For a year now, the sails and the cleaner have been stored in Doug’s rented garage, waiting for me to attend to it. Besides being consumed with house construction, the prospect of trying to clean the sails, perhaps only to find them beyond saving, was enough to put me off. With move in day coming in less than a week, and the wet floors keeping other tasks at bay, seemed like it was now or never.

They soaked in a tub of hot water with the cleaning solution overnight, stirring with a soup ladle every few hours. This morning I pulled the plug. Trying to rinse them from outside the tub was a full contact sport, like wrestling a jellyfish. I finally gave up, stripped down, and just got in the shower with them. Which worked out well, but I will spare my gentle readers the photos of that particular step.

They hung from the rope swing out in the wind and the sun all day to dry. I must say, they look almost as good as new. Cleaner than they were before the fire. There are only a few faint smudges left, adding character. I’ll always remember where those came from. 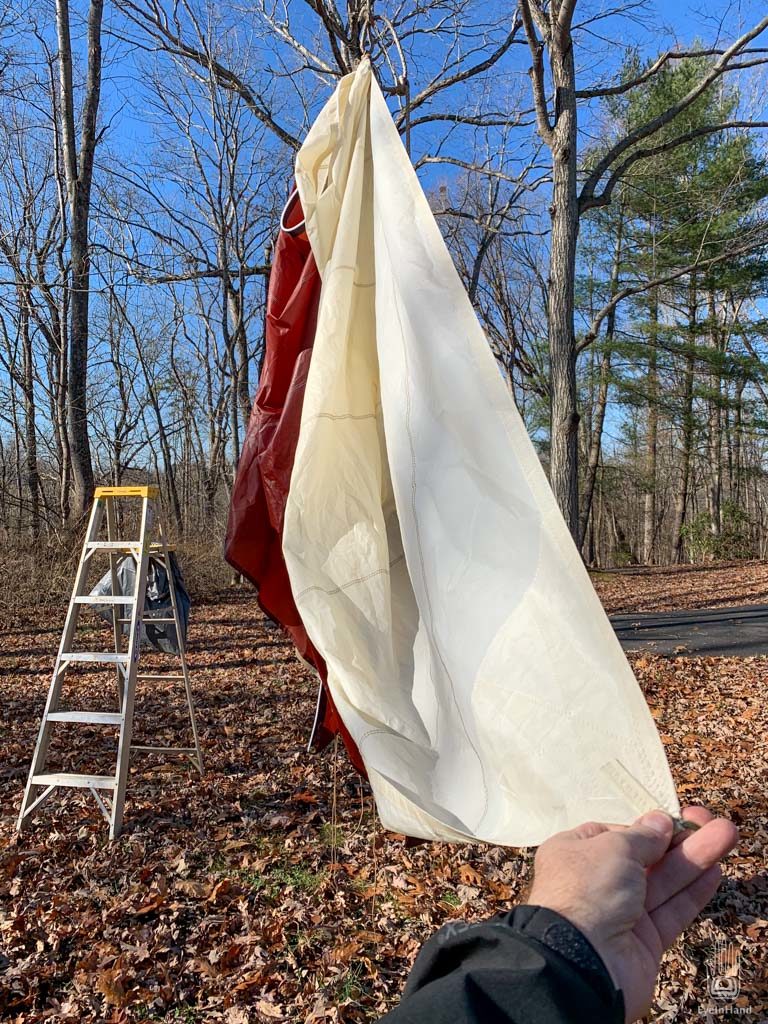 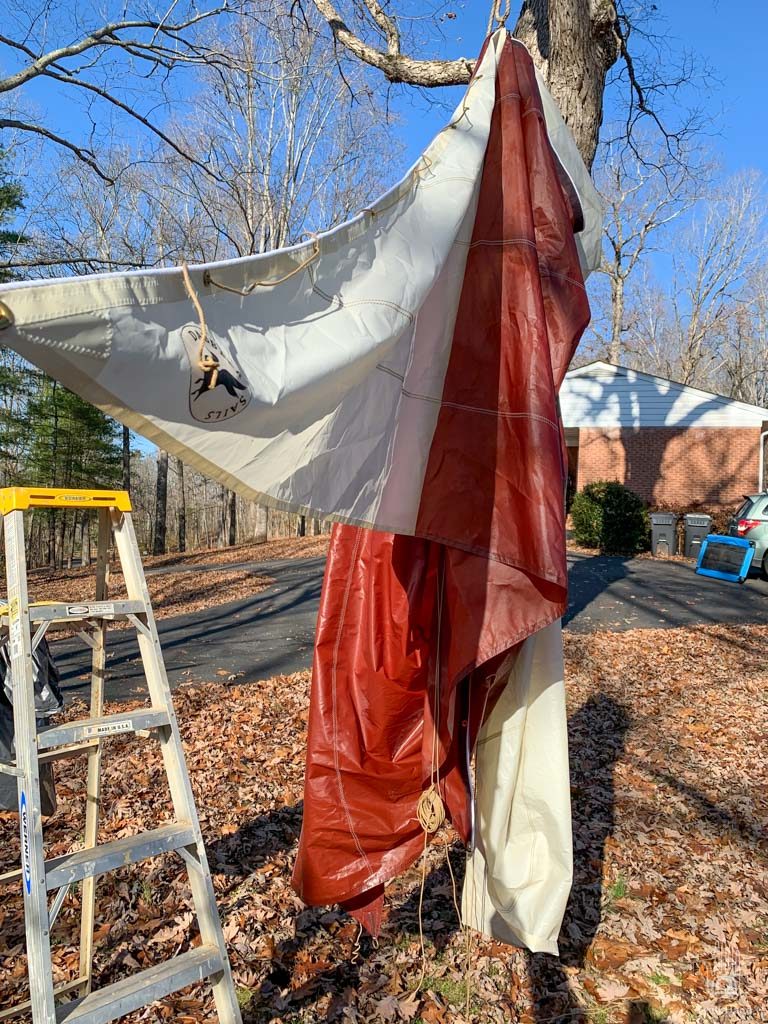 Oh, and Terri’s jewelry box? Another friend, fine cabinet maker Todd Leback of Vaneri Studio,  took on the task of restoring it and sent a photo. It looks like the original birdseye maple again. 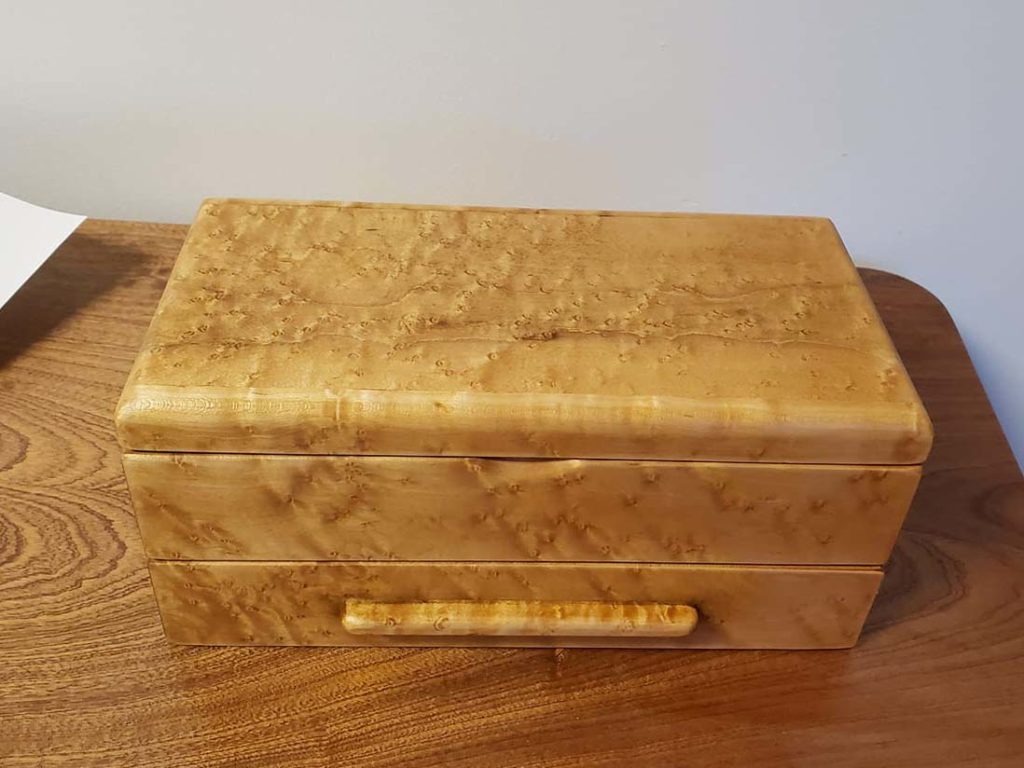