In the Stacks of the Local Sawmill

I have a natural tendency to linger in sawmills and lumber yards. Besides the smell of the forest and warm glow of the wood, everywhere you look you see the potential of beautiful things you could make with what’s there. There’s still something very old school about a sawmill, too. Not much has changed about them in hundreds of years.

Finding good wood these days is always a challenge, though, and that part has changed. Finding it in very long lengths is especially difficult. All the old growth hardwood forests were clear cut long ago, and replanted in monolithic swaths of fast growing pine, so what you can find now are considered “specialty” varieties coming mostly from small, privately managed wood lots, and occasionally national forest land recently opened for limited harvest.

Thinking ahead, I’ll need some long pieces for the toe rails and rub rails, which run the full length of the boats, about 14 feet. I still have some 14 foot Cypress, but that’s too soft. The original plan was to use Ash, which is hard enough to stand up to the beating it will get, but the longest pieces I have are 12 feet. They can be scarfed together for rub rails, but the toe rails are larger and more prominent, and I don’t have any experience scarfing. So last week I made another visit to the wood yard. 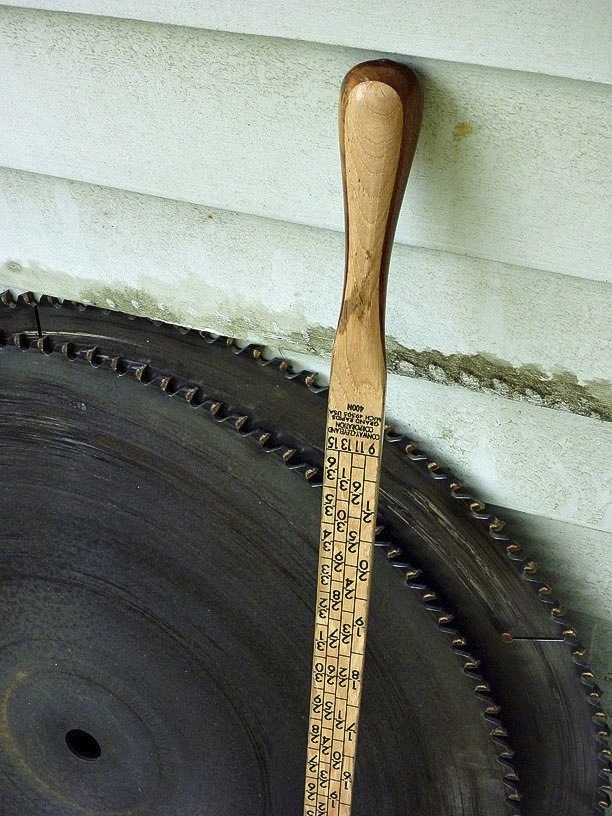 Tools of the trade. A lumber scaling rule, and blades pulled for sharpening.

We have one sawmill locally that works in specialty woods. They actually mill a lot of lumber on site, but they also stock supplies of rough cut timber from all over. I got my Ash and Walnut there over a year ago. They had racks full of Ash then, in all sizes. Since then a beetle, the Emerald Ash Borer, has been killing Ash trees across North America, and it’s become very hard to get. All they have now is shorter lengths, and little of that. My buddy in the office said the situation was getting pretty dire. He also explained they actually don’t stock anything over 12 feet because anything longer won’t fit in their racks.

This presents a bit of a problem. I either have to get good at scarfing and use what I have, or come up with something else. Scarfing light colored woods like Ash is difficult, as it’s hard to hide a sloppy joint. Darker woods are more forgiving. But the colors I have in mind I think will look better with a lighter wood. I wandered around the stacks while I considered the options, hoping to find an idea. 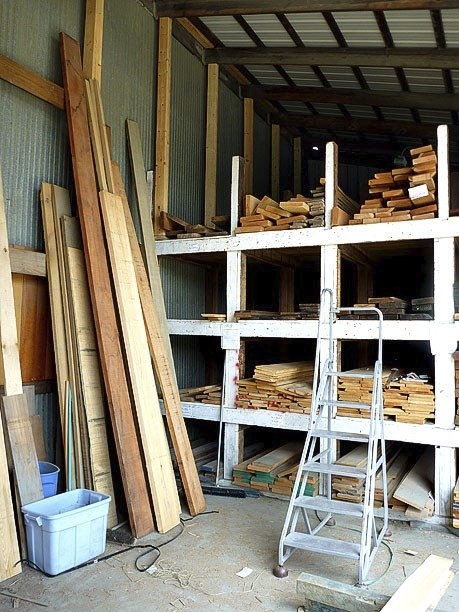 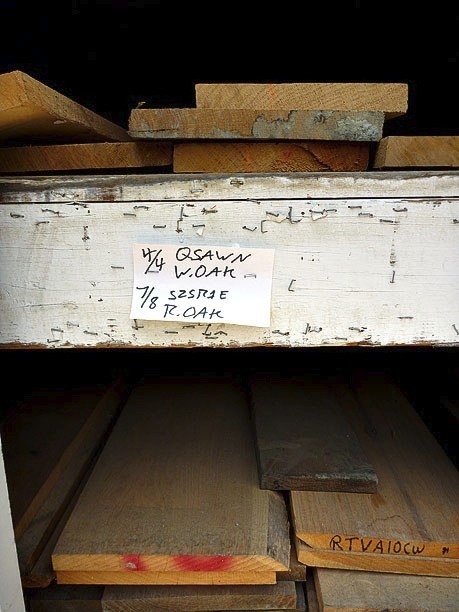 I came across one or two odd long pieces, mostly of exotic woods with exotic prices. Nothing that really fit in my pocket book. Then, tucked way in the back, I found a pile of mis-matched lumber, all jumbled together. This was the reject pile, where anything that didn’t fit in the racks got tossed. I asked about it, and was told I could have anything in there for half price, as it was just a pain to deal with and they’d be happy to get rid of it. This sounded promising. 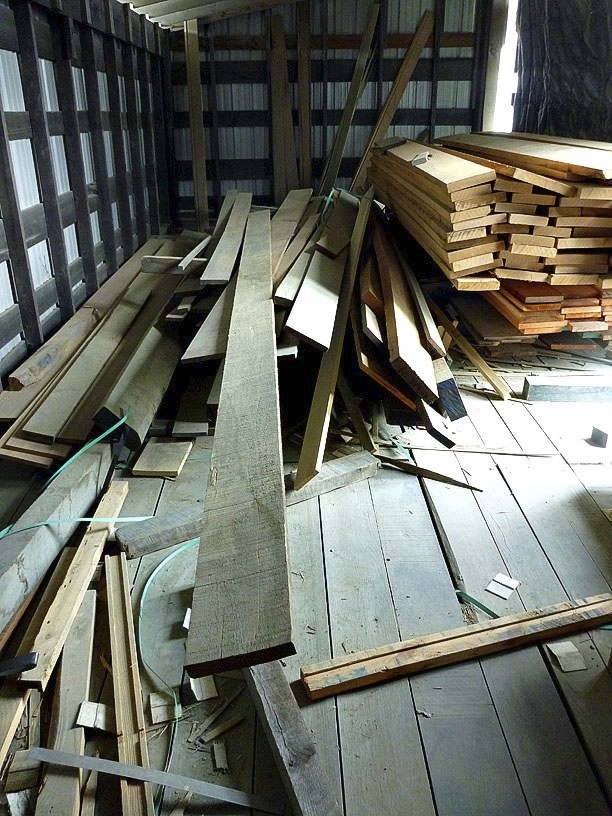 There was all sorts of good stuff there – figured Walnut, curly Maple – along with some junk pieces, but it was so covered in dust and mud it was hard to tell what was there. Under that tin roof in the sun it was about 100 degrees, too, so sweat was mixing with the dust and running in my eyes. No Ash that I recognized, but I found two 16 foot lengths of something that looked like Walnut and loaded it up. Maybe not the wood I wanted, but at least it would match the other trim.

When I drove around to get it measured and priced, my buddy laughed. Not Walnut, he said, Spanish Cedar. You’re kidding, I said. He scratched it with his ruler and sniffed it. Yup, definitely Spanish Cedar, smells like a cigar box. That will look good on a boat. Good thing, I said, because I’m not going back to unload it. Does it come from Spain? Nope, it’s not Spanish, it’s not even cedar, that’s about all I know.

So I drove it home and washed it off. Wow. Underneath all that mud was some very pretty wood. 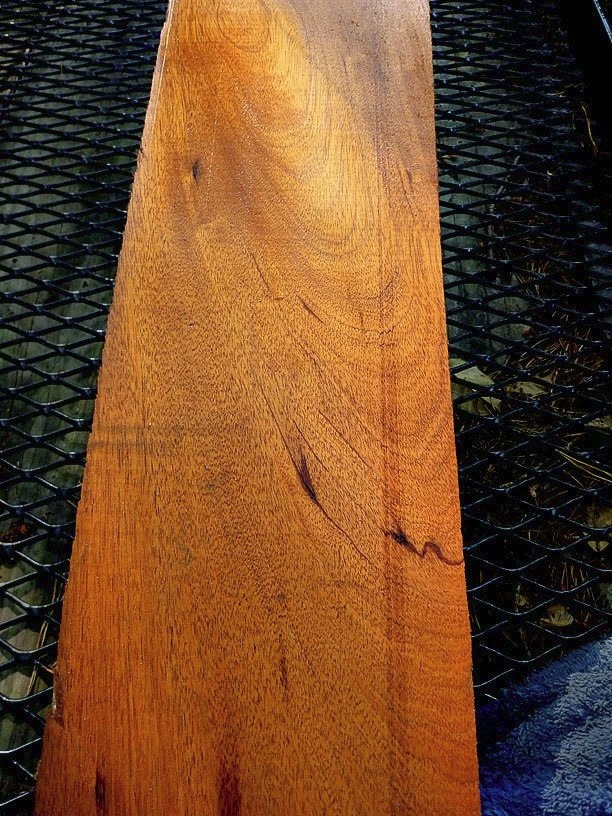 Turns out “Spanish Cedar” is actually a kind of mahogany from Central and South America, and is excellent wood for boats. It’s only called Spanish Cedar here in the U.S. because it arrived on ships from Spanish speaking regions to the south, and had a distinct aroma like cedar. Since fine cigars arriving from Cuba and Honduras arrived on the same ships, packaged in handmade boxes of the same wood, not only did we associate the wood with the Spanish Colonies, but came to associate it with fine cigars, as well, and the two are now inseparable. When you walk into a fancy cigar store, the distinct aroma that overlays the tobacco is Spanish Cedar. Fascinating.

So, I have this very interesting wood now, and it’s long enough. It may not be as hard as Ash, but I whacked it with a hammer and it seems pretty tough. The color might look good with the Walnut, and could work well on the lighter colored boat, maybe even the darker one. I’ll have to play with it some when the time comes to see.
melonseed skiff, mellonseed skiff, melon seed, mellon seed