It took two full days per boat to replace all the temporary steel drywall screws with bronze. I used to think drywall screws were expensive, but these little shiny things are like jewels in more ways than one.

Replacing the screws was quick, but each joint was also sealed and reinforced with epoxy. It’s a belt and suspenders kind of thing. The Cypress is really too soft to hold for long with screws alone. The epoxy not only locks everything down tight, but seals out water and rot. Working with epoxy is what takes a lot of time – all the mixing and spreading, the gloves and bunny suit, and cleanup – even when you’re careful it’s messy, unpleasant work.

Those four days spanned a weekend and a half, and now every bit of framing is permanently in place. Any time there was epoxy left over in a batch, it was used up sealing exposed wood, so by the time all the joints were done, almost all the interior framing was sealed as well. 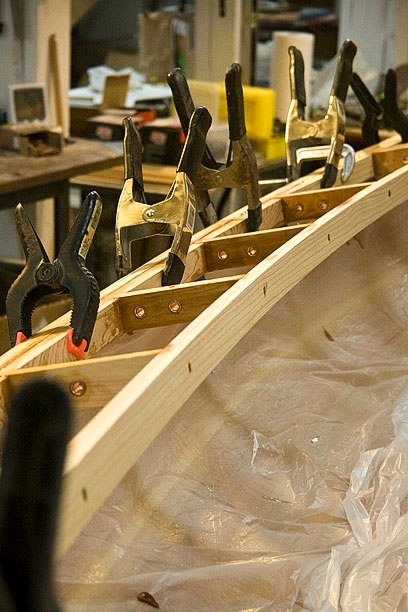 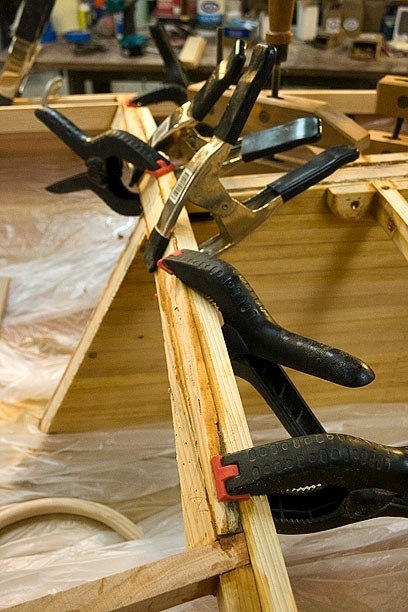 In the meantime, things at work have blown up in a big way, and will be a pain for the next six weeks. Unfortunately, that has necessitated canceling our trip to Carolina. We might try again in the fall, though the girls will be in school then. It also means the plan for taking time off to finish up the boats quicker has been torpedoed, as well. Which pretty much only leaves six weekends between now and the Mid-Atlantic Small Craft Festival in St. Michaels to get everything done.

Everything’s coming together well, but that doesn’t seem like much time. Better get cracking.

2 Replies to “Bronze for Steel”