Both decks are now permanently attached, marking the last major structural step before these boats are done. Aside from the rudders, tillers and hatch covers, there’s nothing left but trim and finish work. Lots of it, granted, but nothing scary. They look like boats now.

Attaching the decks is a pretty big deal, and the process for each one took about five hours, even after all the prep work was done. I had to make a check list just to keep all the steps straight. Like cutting the centerboard slots, because they are epoxied down there’s only one shot at getting it right. The glue starts to set up, and what you got is what you got.

I’ve been running fans over buckets of wet towels for the last several weeks, adjusting the humidity as needed to get all the pieces stabilized at the right curvature. The decks went from wildly concave to convex like potato chips, and finally back to the original curves. The transoms, which a few months ago were warped badly, are now virtually flat again. I’ll continue to monitor them until the outer layer of walnut is on, when all this nonsense will finally stop. 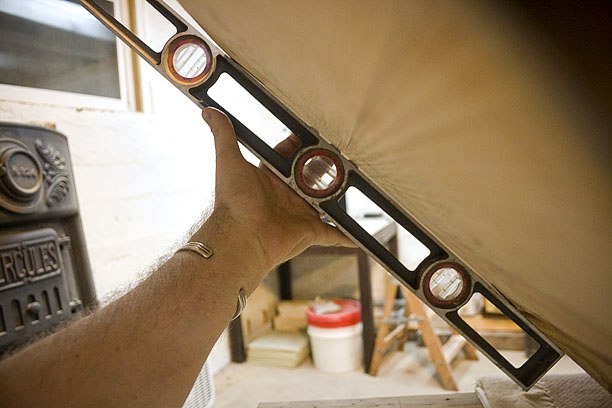 Taping was easier than wiping up the drips. Much.

Nice to have help moving the big floppy things.

Two coats of epoxy, ready to clamp down while still sticky.

Thickened epoxy. Nipping the corner off a plastic bag
made a cake icing type squirty thing.

Just about anything qualifies as a clamp. 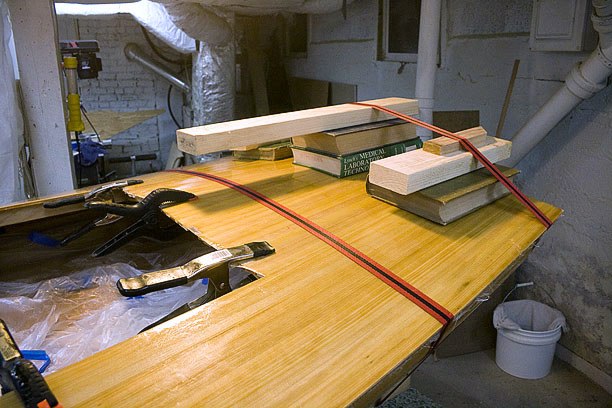 Nice fit on the Deck/Frame joint all the way around.

Finished each deck around 4am on two different nights. The final fit came off well, though, with no real gaps or mishaps. A few drips got missed on South, still to clean up. Taping everything was easier than wiping up, and North got fully taped, peeling it and the drips away while the epoxy was still soft.

North, decked last night, sits under a blanket with a light on inside to hurry things along. South is now ready for cutting the overlaps flush and moving on to trim work. Hoping to get a good jump on that over the long holiday weekend.

Having the support of your family for a project like this makes all the difference in the world. It definitely determines the balance of joy to misery – indeed, whether the project is ever finished at all. I’ve been extremely fortunate. I continue to find little surprise messages of encouragement scribbled on pieces of scrap wood, and in my notes of things to do. And I’ve had hands-on help from everyone.

Long checklist of steps for attaching the decks.

Pleasant reminders in the subtext.

Notes for the builder left on a plywood table.

The girls seem to think it’s pretty cool their dad is a little crazy, or least that’s what they tell me. Though Terri was surely well over the novelty of the project long ago (it’s been underway for a year and a half now) to her credit she has never said so, and still manages to stay interested when I ramble on about some difficult whats-a-mahoozit giving me trouble. Moreover, twice in the last two weeks she stayed up past 3am to help put the decks on – one of the few tasks I simply could not do by myself. And that was after waiting all afternoon for me to get everything ready.

3 Replies to “All Hands on Decks”