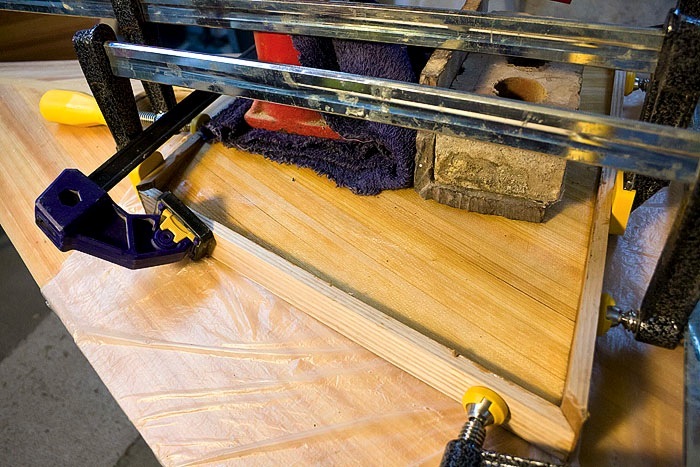 Managed to get a little work done between New Years festivities, etc..

The weather warmed and melted all the snow, but humidity is still very low. Getting the hatch cover cutout back to it’s original shape required several days in a tent of plastic with a wet paper towel inside.

An extra day flattened it out just beyond the original curve, so that over the course of an hour, with it out in the air as I worked on the box trim, it would steadily dry out and curl up again. For a brief period, it was exactly right. After two hours, it would have to go back in the tent for another dose of dampness, just to maintain some stability. Craziness.

Doing one hatch cover already, it proved easier to cut the bottom profile and miters of the trim exact, but leave the top edges oversized to be cut down and sanded flush later.

Once the trim is ready, devising a reliable way to clamp the odd trapezoidal shape is another challenge. I’m sure there are clamps made especially for this type of thing, but I don’t know what they are, and I surly don’t have any. Then, to keep the correct size and matching curve of the deck, the whole thing has to be clamped in place, with plastic over the hatch coaming underneath so it doesn’t stick.

The trick to all this, finally, is the wood will begin to dry out almost immediately, contracting with enough force to pull it apart before the epoxy sets. The plastic underneath will help, but to counteract the shrinkage, I put a bucket of water inside the boat under the hatch, with big sponges for wicks. This raises the humidity on the underside, where it’s needed, by about 20%. Just enough, but not too much. Then heavy weights on top keep the crown pressed down into place. I think this will work, and immediately found a good use for that big hunk of exotic wood Dave Lucas sent me. 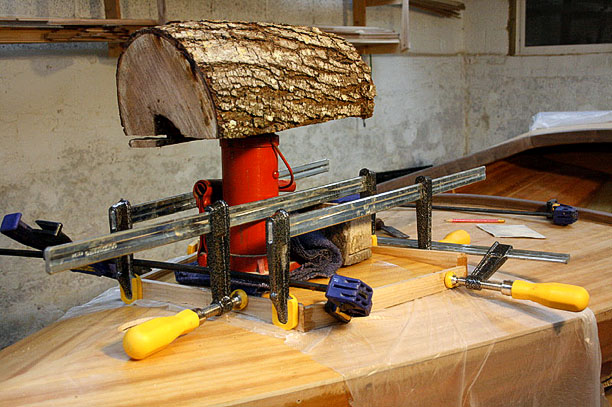 In case anyone underestimates the amount of curving and shrinking we’re talking about here, or thinks I exaggerate, have a look: 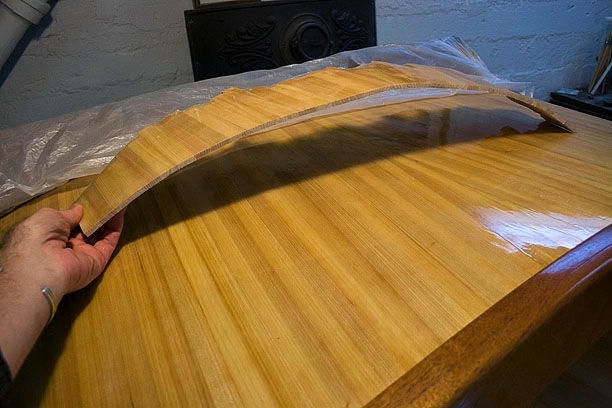 The piece of wood above was trimmed off the aft end of the deck last summer, when the humidity averaged over 60%. Back then, this piece had a gentle curve in it, exactly matching the curve of the deck from which it was cut, which is just below in the photo. The deck got mounted in place, and the underside sealed with glass and epoxy, locking in the shape it had at that moment in time.

Since then, the piece that was trimmed off, still bare wood on the underside, has continued to morph into other shapes according to fluctuations in humidity. For two months now, ambient humidity has been around 30%, and the underside has contracted and curled the piece dramatically. In it’s original shape, it’s exactly the same width as the deck, not short by 6 inches on each side as it looks in the picture. In other words, at the time it was cut, this piece would lay perfectly flat against the curve of the deck. Next summer, it will again.

Here’s a shot from another angle: 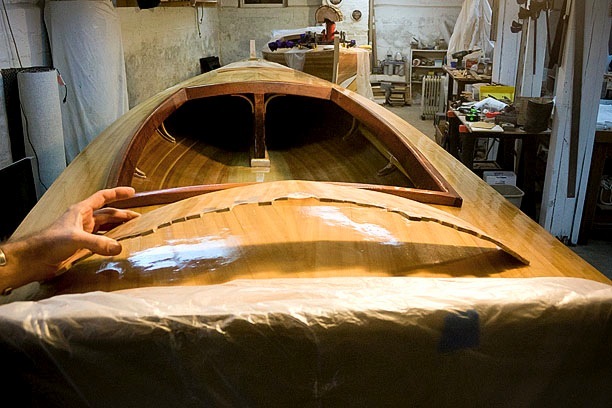 If you try to force a piece of wood warped this way back to it’s former shape, it will snap. Don’t ask me how I know, just trust me on this. The only way to get it back where it needs to be, without breaking, is to raise the humidity and let it sit like that for several days. If it gets overly damp, and has expanded too far, you can force it back to a tighter curve without much risk – wood will compress, but it won’t stretch.

I’ve gotten so paranoid about this that I’m keeping the walnut transoms wrapped, with buckets of water inside, so they don’t shrink and split before they get an outer coat of epoxy.

Who’da thought? I sure didn’t.