Spartina in the slip

Steve warned me about the wine festival going on next door.

Leaving the mountains before daylight (I am sooo not a morning person), then driving east a couple of hours with nothing but a pot of coffee for breakfast, then headlong into the blinding rising sun, only to arrive in a city already unnavigable on any day, but now with barricaded streets (“Now With Even More Unnavigabilty!”), well dang. Every street within four blocks of Spartina was garrisoned by petulant orange cones blockading the precious oenophiles, barring passage. Tired of circling the block, I bounced over a concrete median into a parking garage, waving at the not overly amused patrolman. He was there for the overtime – getting paid to block the road, not write tickets – and we both knew that. 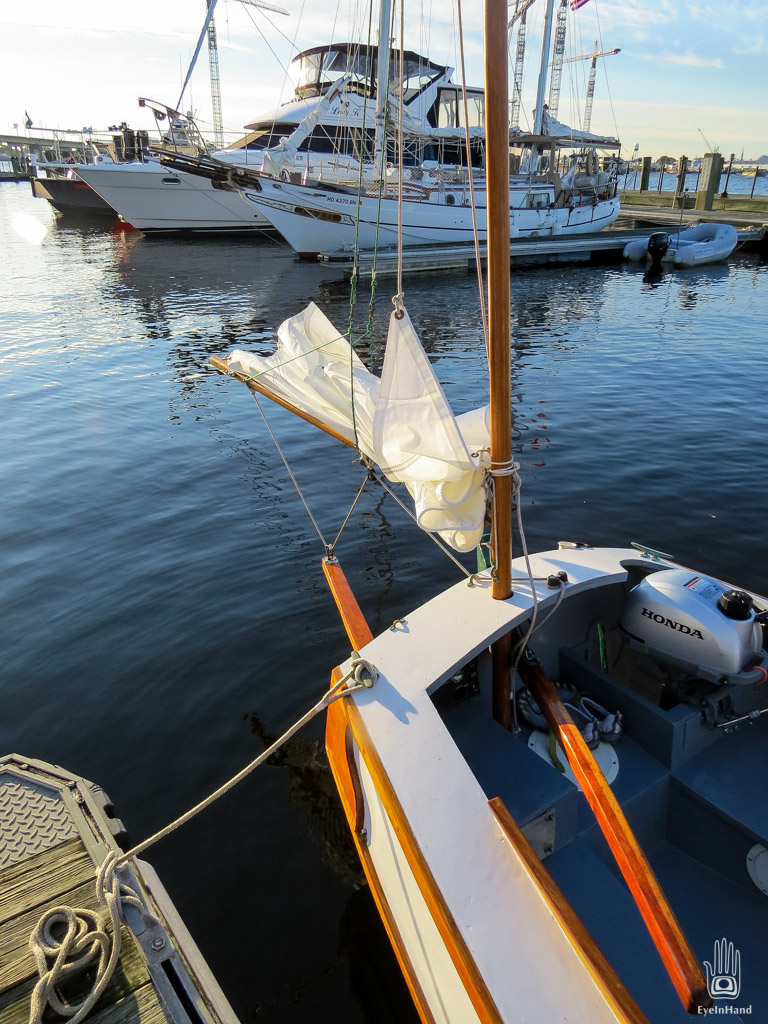 Norfolk, like most old port cities, is far easier to get around by water than land. The few straight streets deadend unexpectedly in blind alleys at the wharves. The non-straight ones parallel the shoreline, meaning they don’t parallel anything, meandering around the points of the compass. You start out going east, the direction you need to go, then soon realize you’re going west again. Even parts of the interstate will say they go east when clearly you are going west. It’s maddening. Out west, the roads are laid out to follow straight plow furrows. Here they follow the coursing of water.

Progress on foot was at least more direct. The Waterside Marina is pretty small. I had Steve’s location, down to the slip, blinking on the GPS. Piece of cake. But from the boardwalk I did not see Spartina. I walked down the docks, almost to the end, and still no sign. It wasn’t until nearly on top of them that I finally saw Steve and the boat, tucked cozily between two big power yachts, totally occluded.

Spartina is a big boat by my standards, but here in the heart of the city – office buildings above, barges, cruise ships, aircraft carriers and ocean-going yachts all around – she looks tiny, if proud. Pleasantly out of place amid all the iron and glass and stainless steel and plastic boat bling. A handmade thing of wood, well-loved and well-used, bobbing among anonymous offspring of industry. Quite a contrast.

The wine festival had us both whining. It meant I had to pay to park the car, and he had to pay four times his usual rate to park his boat. Insulting, in that neither one of us intended to drink any wine. Slipping the lines and motoring past the jetty on 2.3 horsepower improved the mood immediately, and navigating suddenly became much easier. 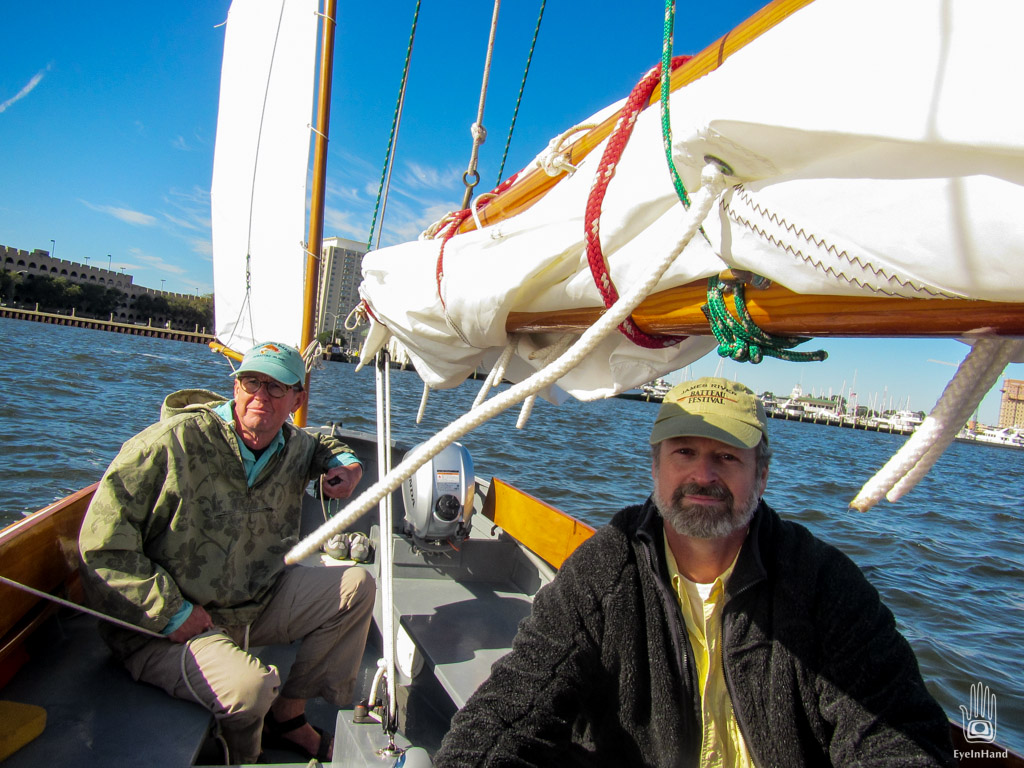 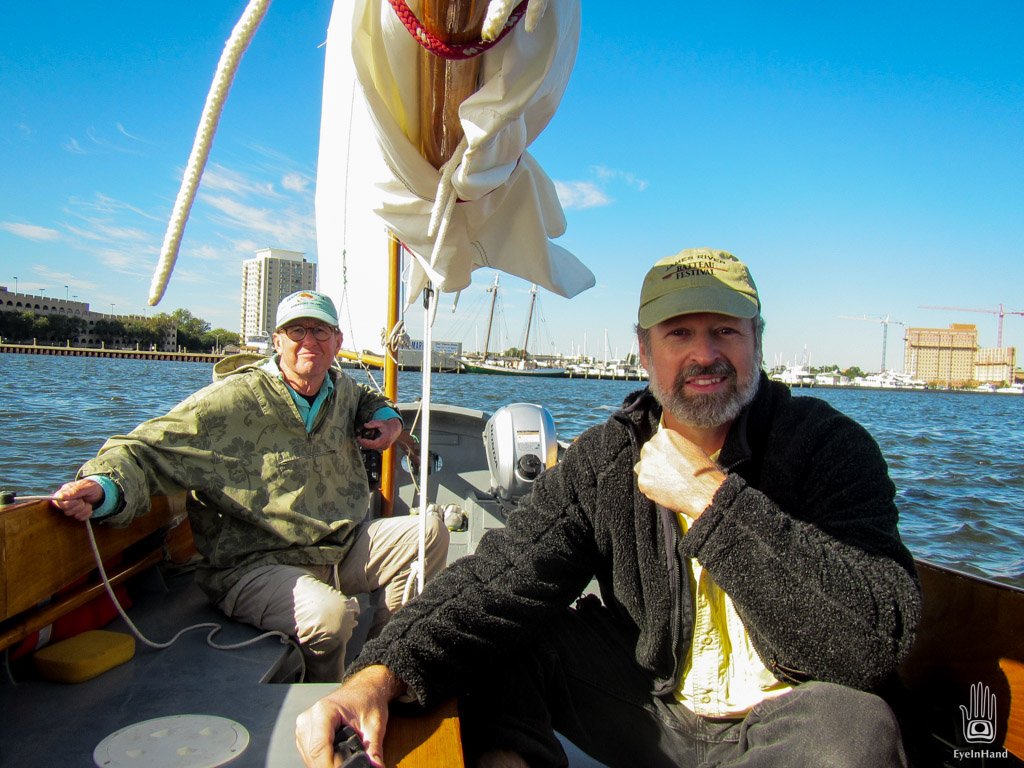 A couple of years ago, I was fortunate to crew on Paul Grey’s Quintessence in the Great Chesapeake Bay Schooner Race from Baltimore to Portsmouth. Couldn’t go this year, but Steve invited me down to go for a sail in the harbor as they weighed anchor and left town. We met once before briefly in St. Michaels at the end of the Crab House 150 with his longtime friend Bruce, then eventually here on the docks in Portsmouth in 2011, the year I crewed, when we finally had a chance to chat over breakfast and much needed coffee. Later, we sailed together during Opsail on Spartina, which was a lot of fun, so I was looking forward to this trip. The weather outlook for the day was great, too.

Once we got clear of the docks Spartina felt big again, much bigger than my boats. It feels positively spacious, like a floating living room compared to the Melonseeds. Room to stretch out, move around, and then some. We motored to the edge of the channel, nosed into the wind, and Steve moved forward to raise sail. In almost no time a barge appeared under the drawbridge, almost on top of us and giving no leeway. The barge had plenty of room in the channel, just chose not to use it, bearing down on us instead. It wasn’t exactly a close call, but I know Steve was relieved when the sails grabbed wind. And so was I. 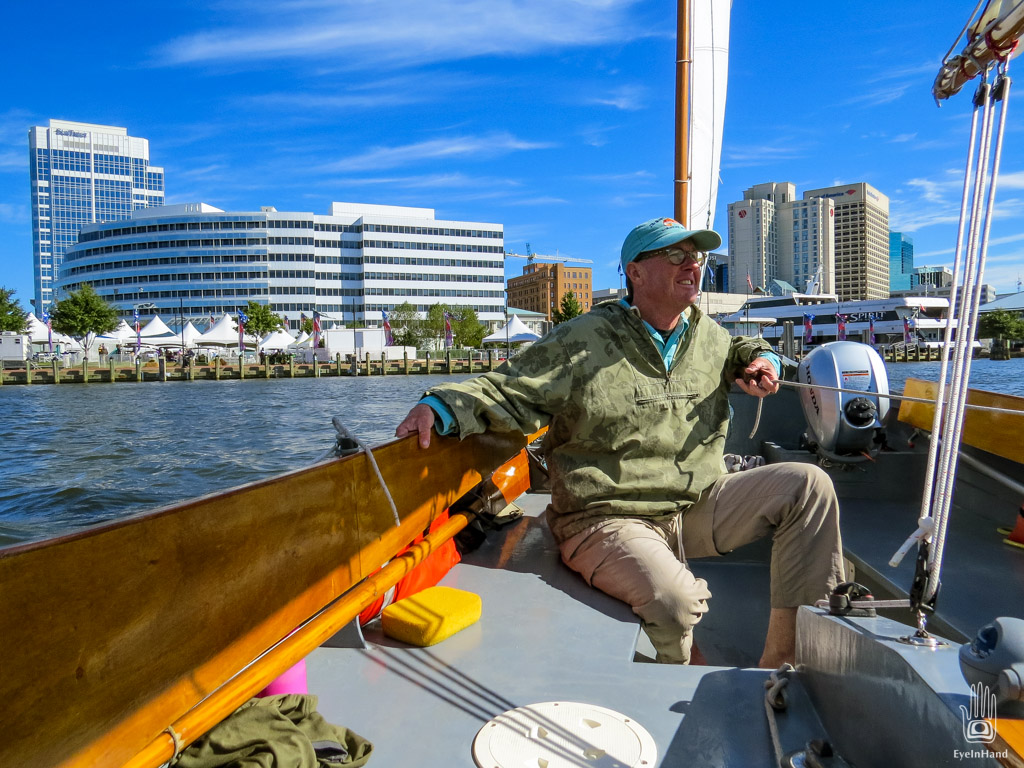 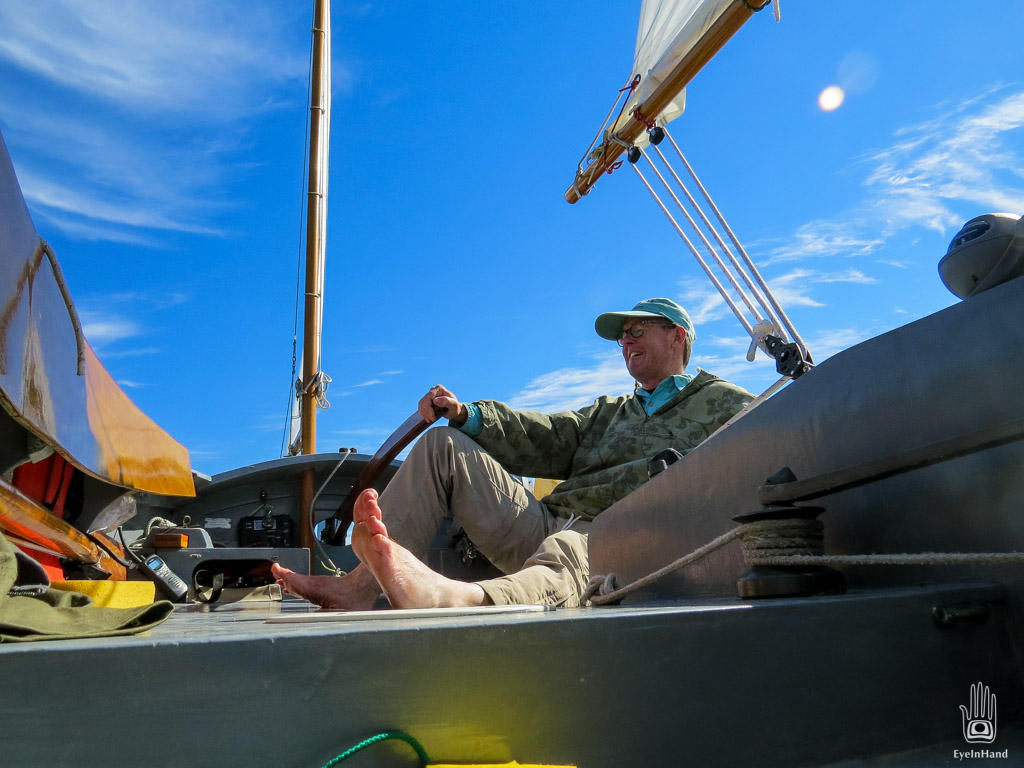 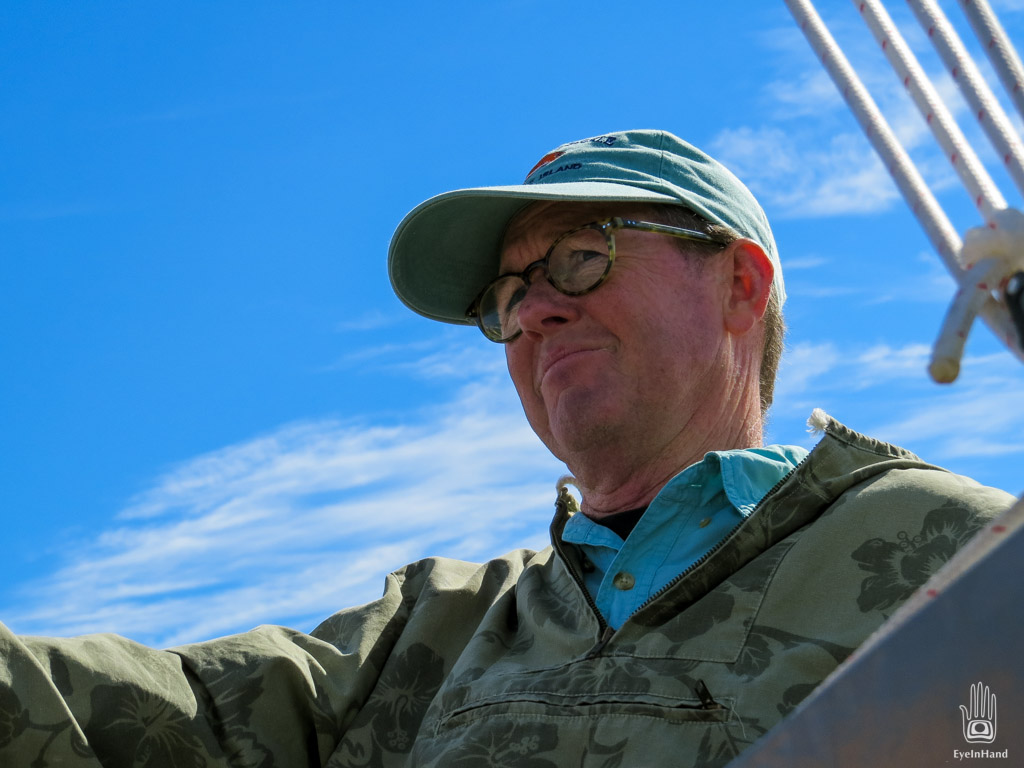 Steve seems to be fond of big contrasts. He just returned from 12 days of sailing, alone – 425 miles of not much more than marshes and water and wildlife, just him and the boat. The kind of sailing experience he clearly loves, since he does several trips like that every year. And yet here he is Hampton Roads, just days back from that trip, in one of the busiest shipping lanes in the world, dodging barges and container ships in confined quarters, towered over by urban skyscrapers, Naval Shipyard workers welding on aircraft carriers, cascades of sparks dripping into the water, twitchy harbor patrols waving their rifles at the slightest odd (in their view) behavior, tugs, titty bars, monstrous to the point of grotesque cruise ships, etc..

In fact, he sails here so often he’s become a bit of a fixture. He’s lived and worked in the area a long time, and many people know him through work; but others only know him as the guy in the pretty little green sailboat shooting between big ships in the seaway. Everybody waves. 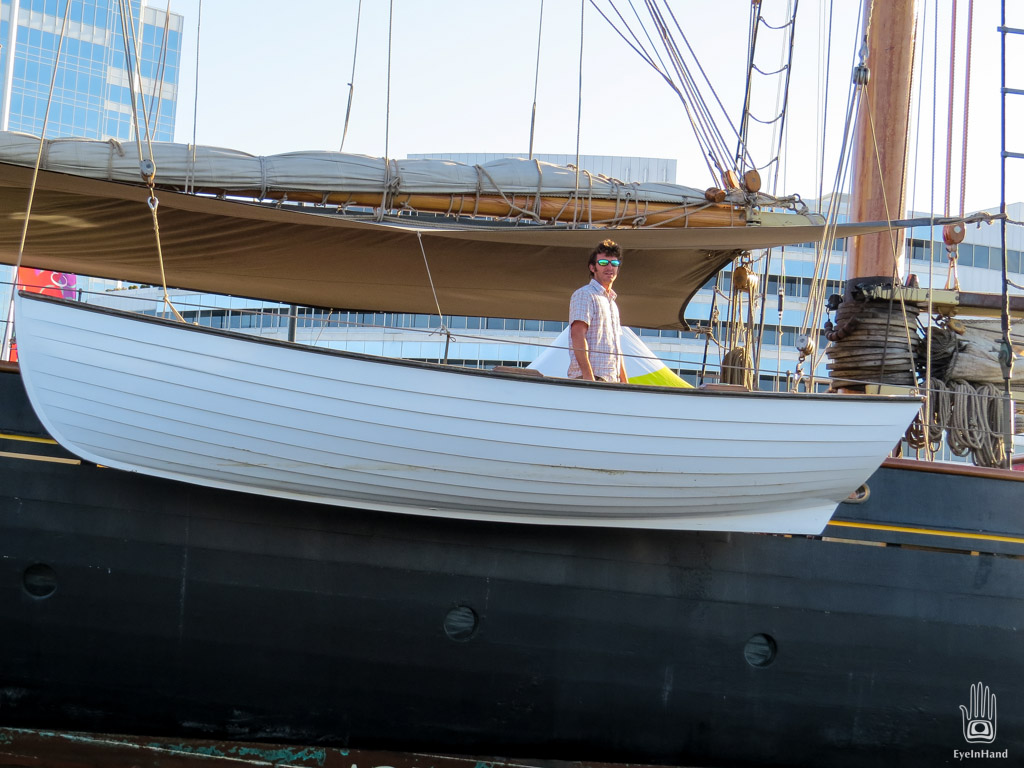 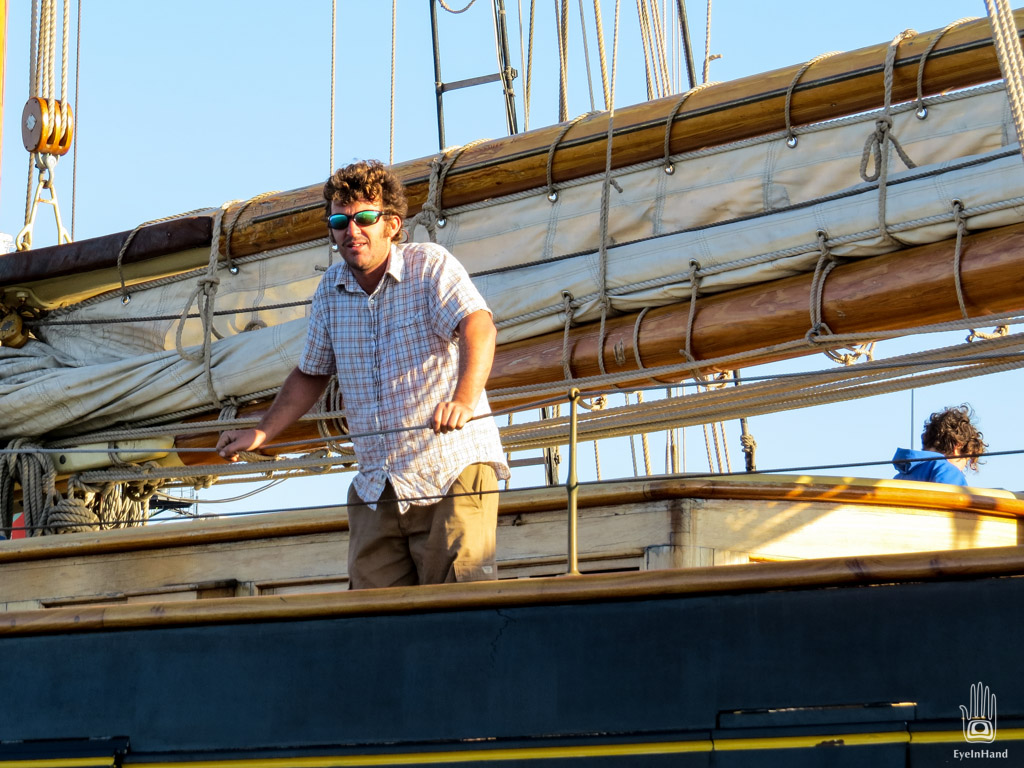 Just down from the marina is the schooner Virginia. He’s been on the boat several times, knows the crew and owners. We chat a little each time we pass.

Beyond that is the Carnival cruise ship Glory, so big I could see it looming down most streets when driving into the city, and at first thought it was an office building. So big, that if it stood on end like a building it would be taller than the tallest building in the state. Not by a little – twice as tall. In fact, at 1000 feet long, only a handful of buildings in the country would be taller. It’s has 13 decks, like 7 swimming pools, a jumbotron for watching football games on deck, and thank god a water slide.

Between crew and passengers, you too can spend weeks on such a thing in close confinement with 4000 of your closest friends. Clearly enough people love this sort of thing that the cruise line keeps building more and bigger ones, at more than half billion dollars a piece. Somehow the fact that I don’t understand why people love it is closely connected with my modest income. I understand this, but wish to remain unenlightened. 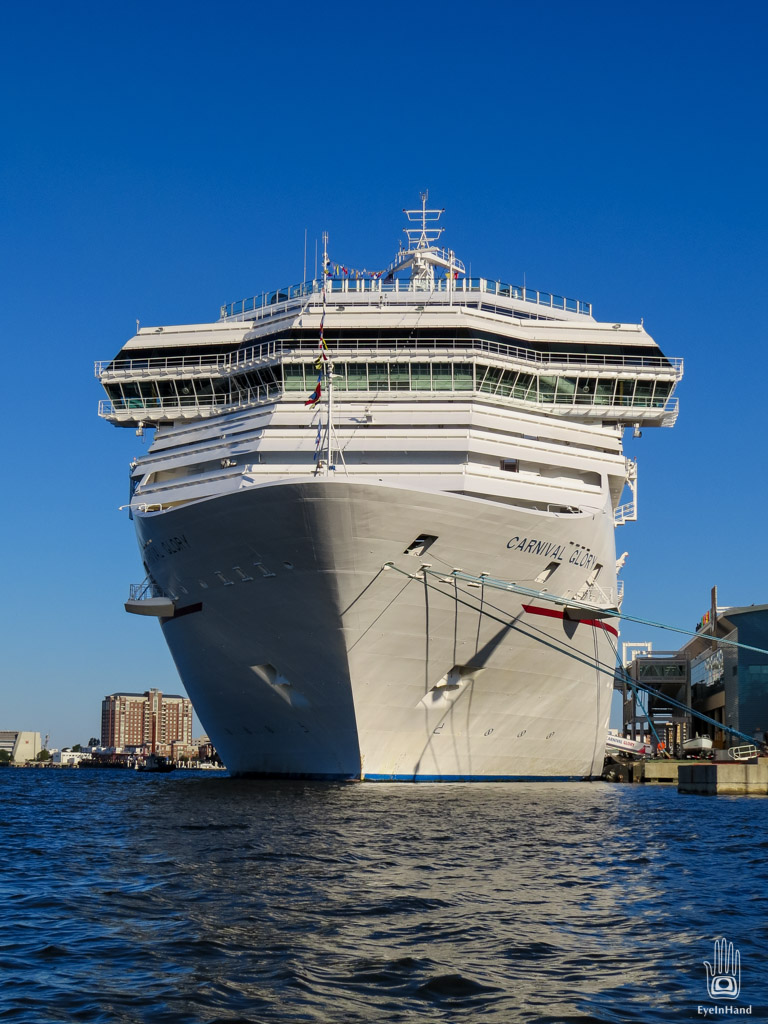 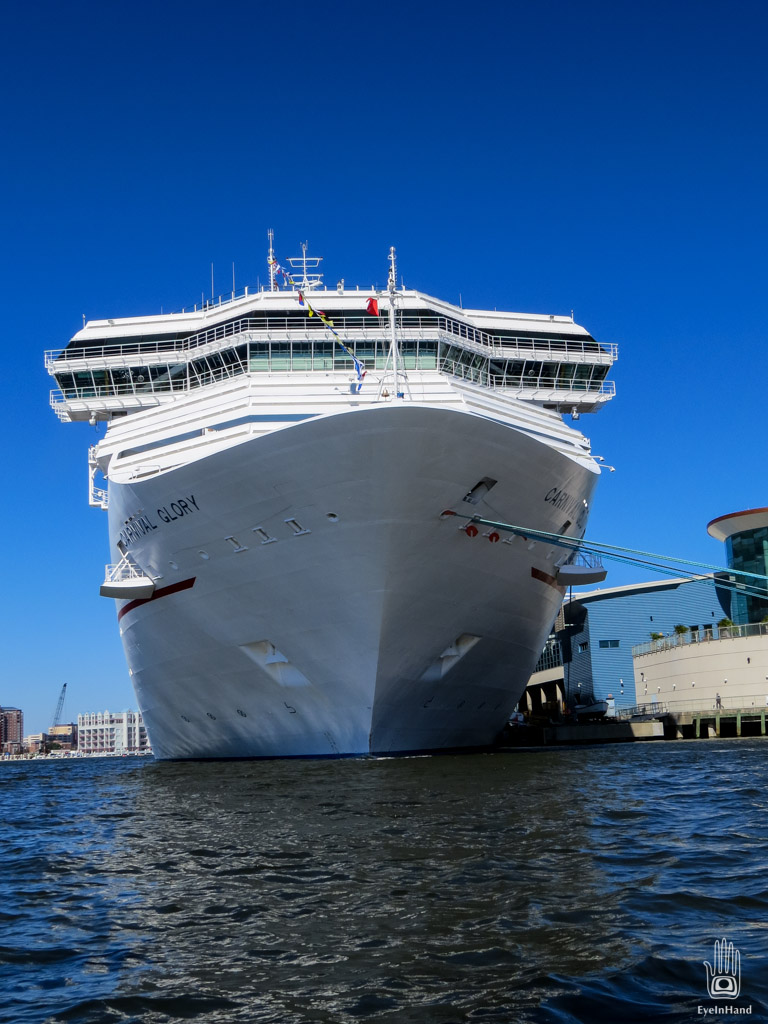 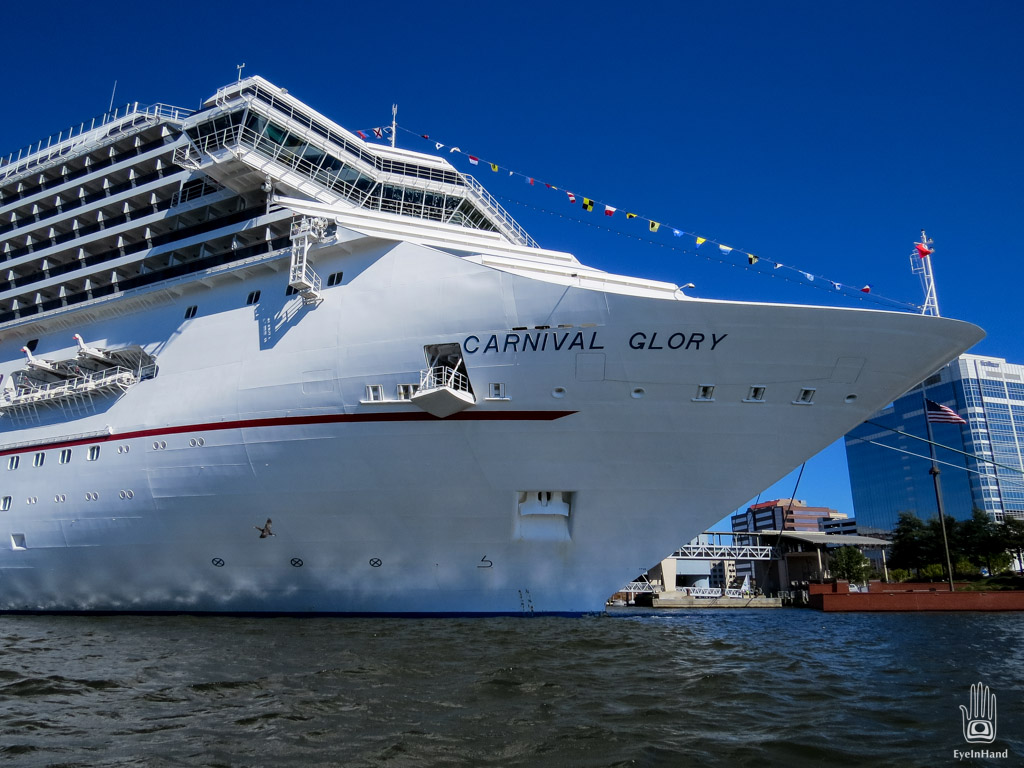 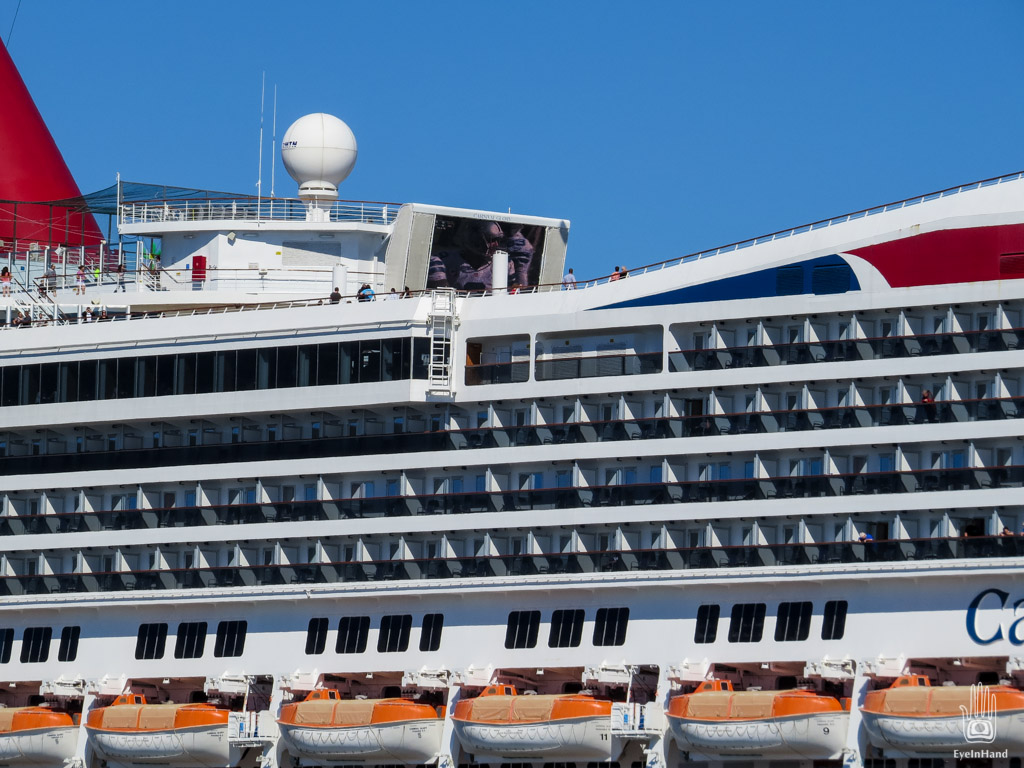 Across the harbor and into the Elizabeth River we came to most of the schooner fleet, anchored on the Portsmouth side. A big party the night before, not much stirring in the morning. The tradition, as I recall, is those that can pull their legs beneath them the next day stagger down to Roger Brown’s for breakfast, a sports bar a few blocks away. We pretty much had the place to ourselves. 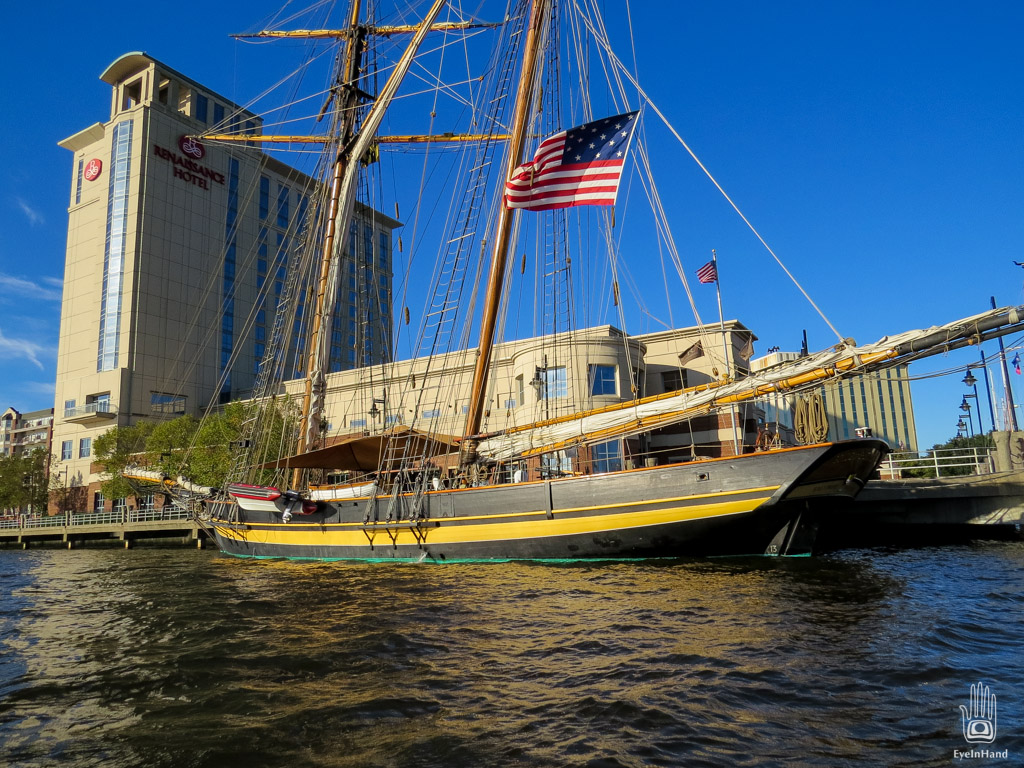 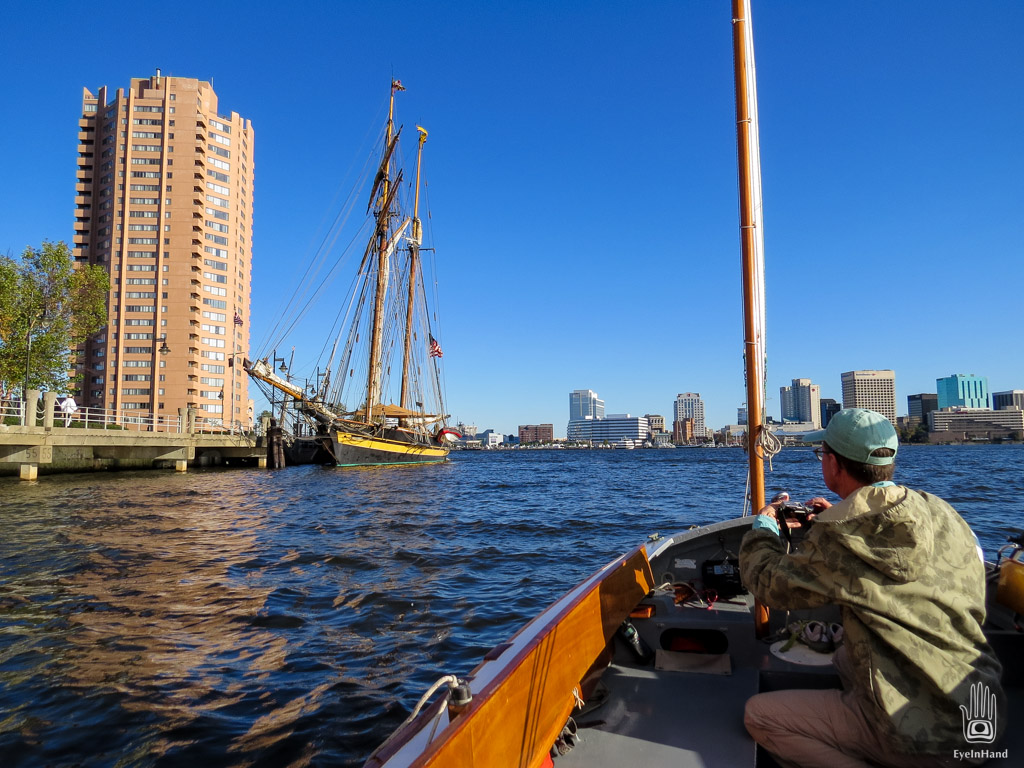 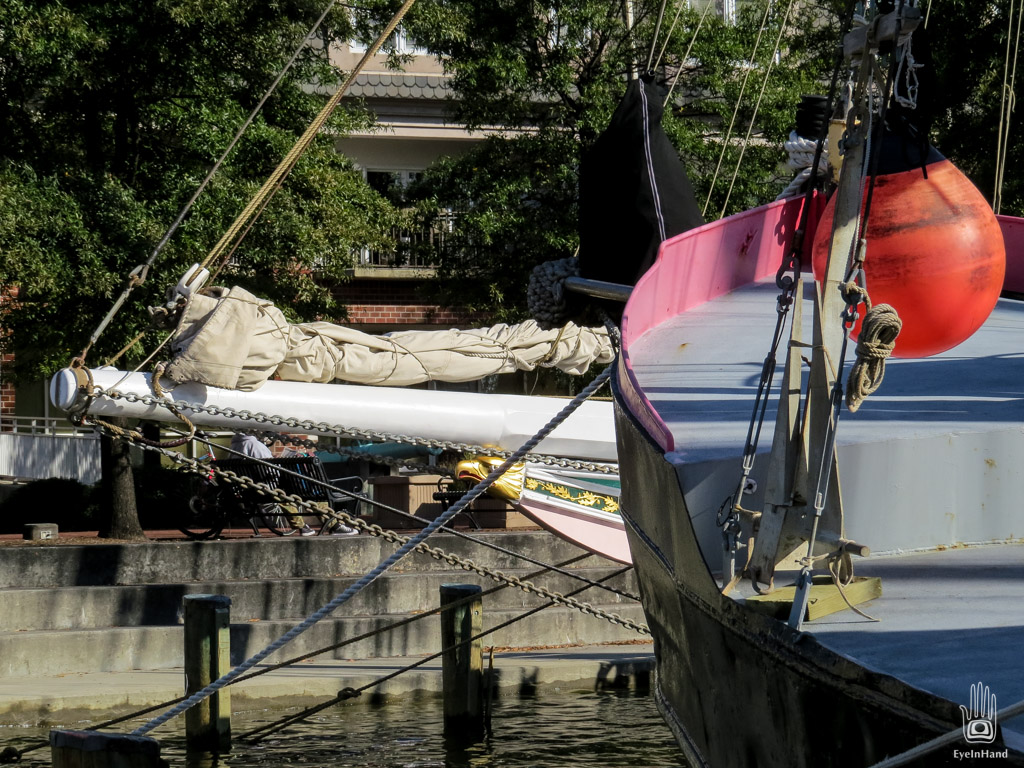 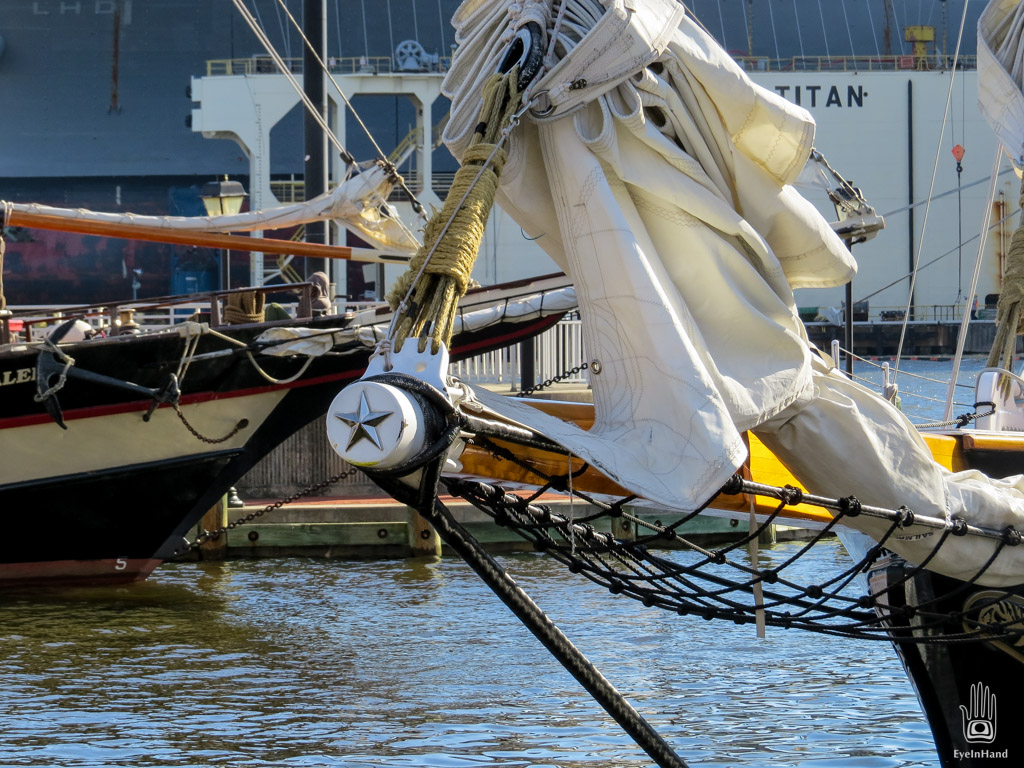 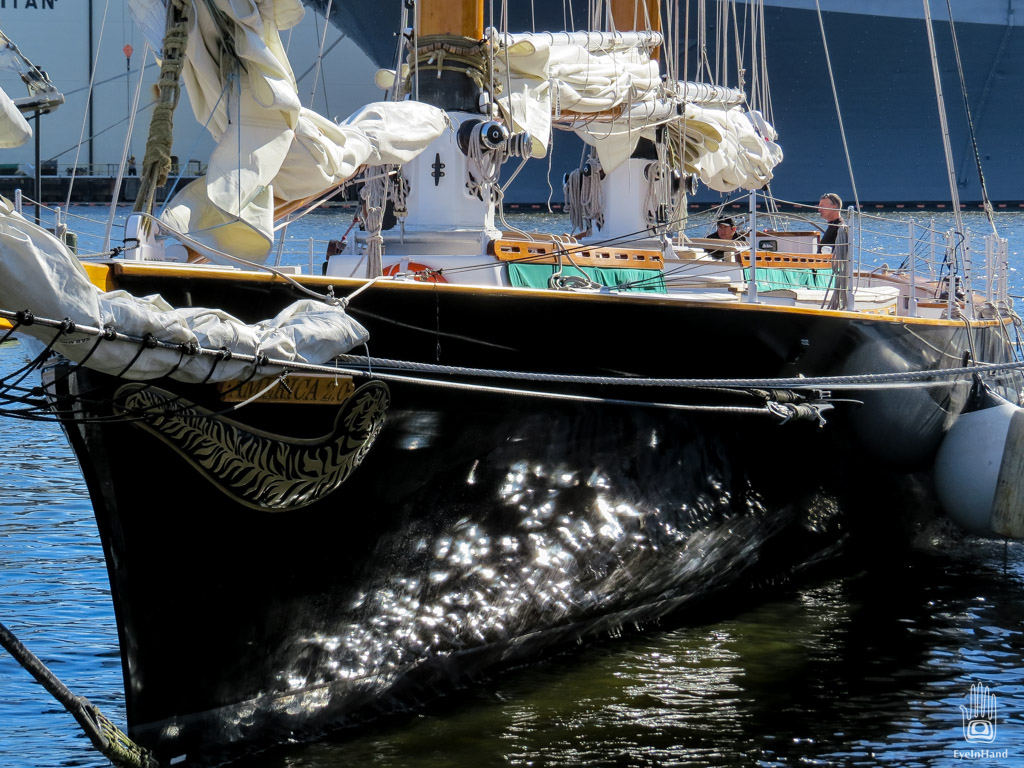 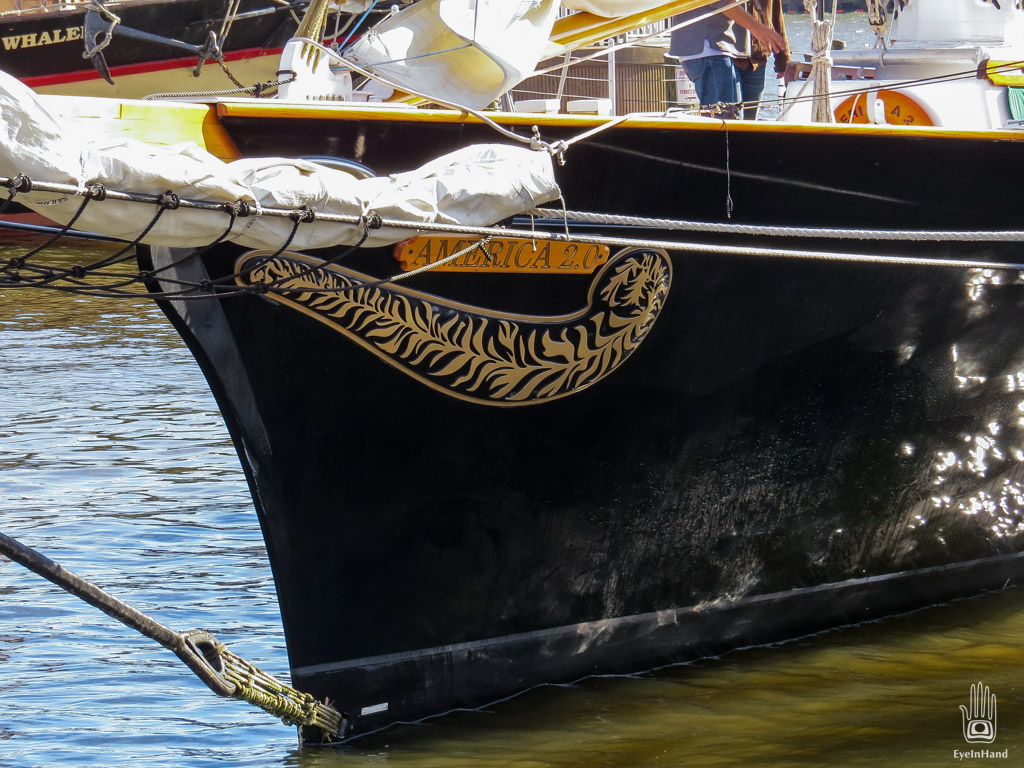 It’s Fall, which means the tides are high. There’s a full moon, which makes them higher. There’s a north wind blowing down the Bay, making them higher still. The docks were under water. We tied up, waded to land, and walked around a bit. Crew leaving the Lady Maryland wore their wellies getting to and from. 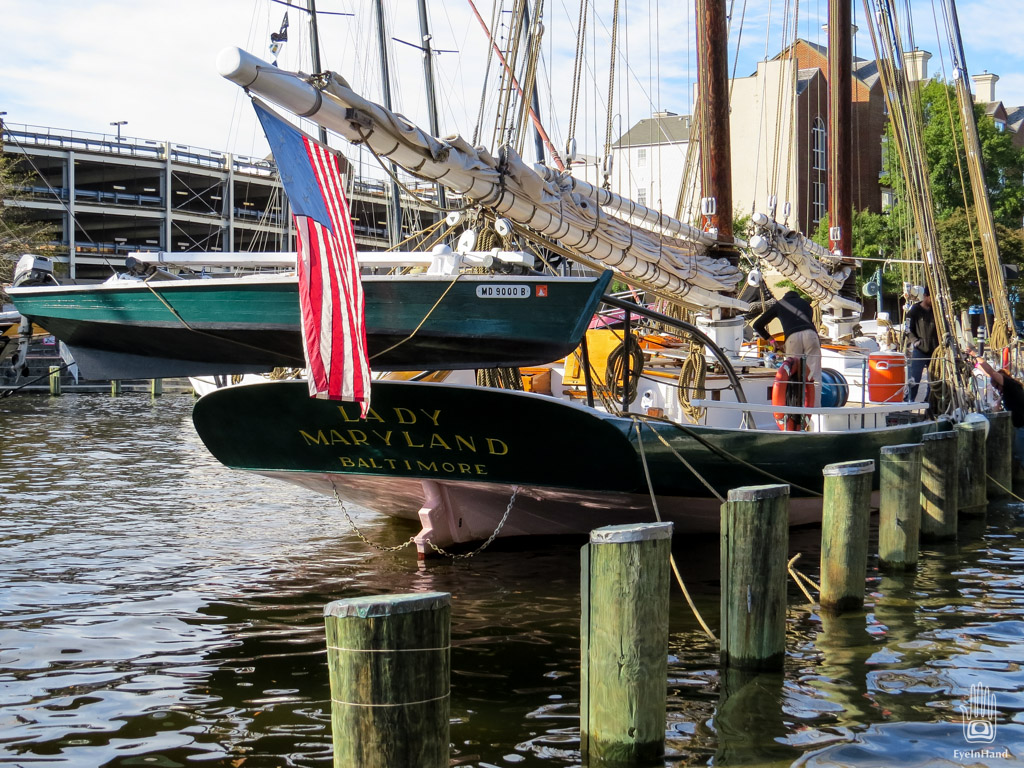 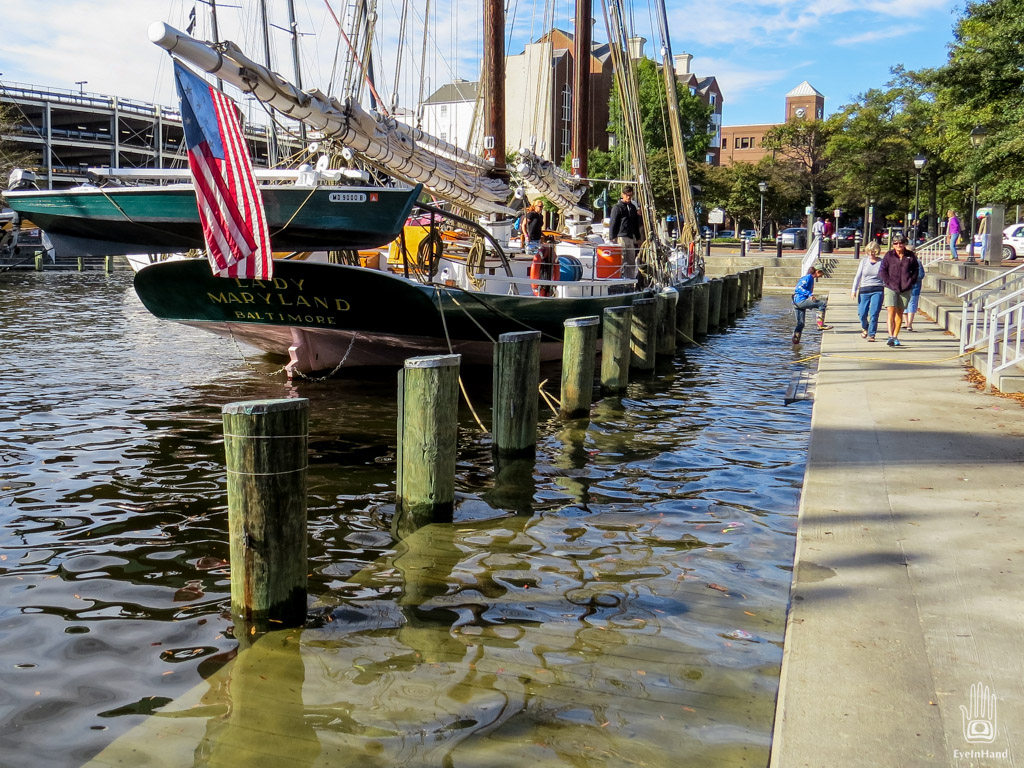 I told Steve that long ago, when I had a girlfriend in Norfolk, I used to walk the streets at night and find them flooded in an area called Ghent. It was more accurately a place called The Hague. No matter. They’re all named for places in the Netherlands, for good reason. He said during storms there are well-known places in town to go with a camera where you’re guaranteed to get a shot of someone standing on the hood of their car, stranded in the road in three feet of water. Sea level rise will not be kind to this place.

I got some fun video from the trip, I’ll get up in a day or so.